Halloween 2014 - A Growing tradition in France

Trick or Treat
Celebrating in France


Last Friday we celebrated Halloween in France.  To be honest, we started our Halloween celebration earlier in the week at a family party hosted my international women's club.  It was a perfect time to start us getting in the mood.

It was a potluck where everyone brought something to share and it was great to see fun- Fall/Halloween themed foods!  So festive!!


We also carved pumpkins there.  Remember Halloween is not a French holiday.  France considers it an "Anglo-Saxon" holiday but it seems to be slowly catching on here. Having been here for 3 years now, I'm happily surprised that each year, the holiday has seemed to grow.  Traditional pumpkins were easier to find this year.  (Sorry no, pumpkin farms or farm stands in this country).  I saw them in the produce section of a couple of bigger grocery stores.  The traditional ones are called Jack-o-Lanterns, but as you can see from the table, other versions of squash were used too. 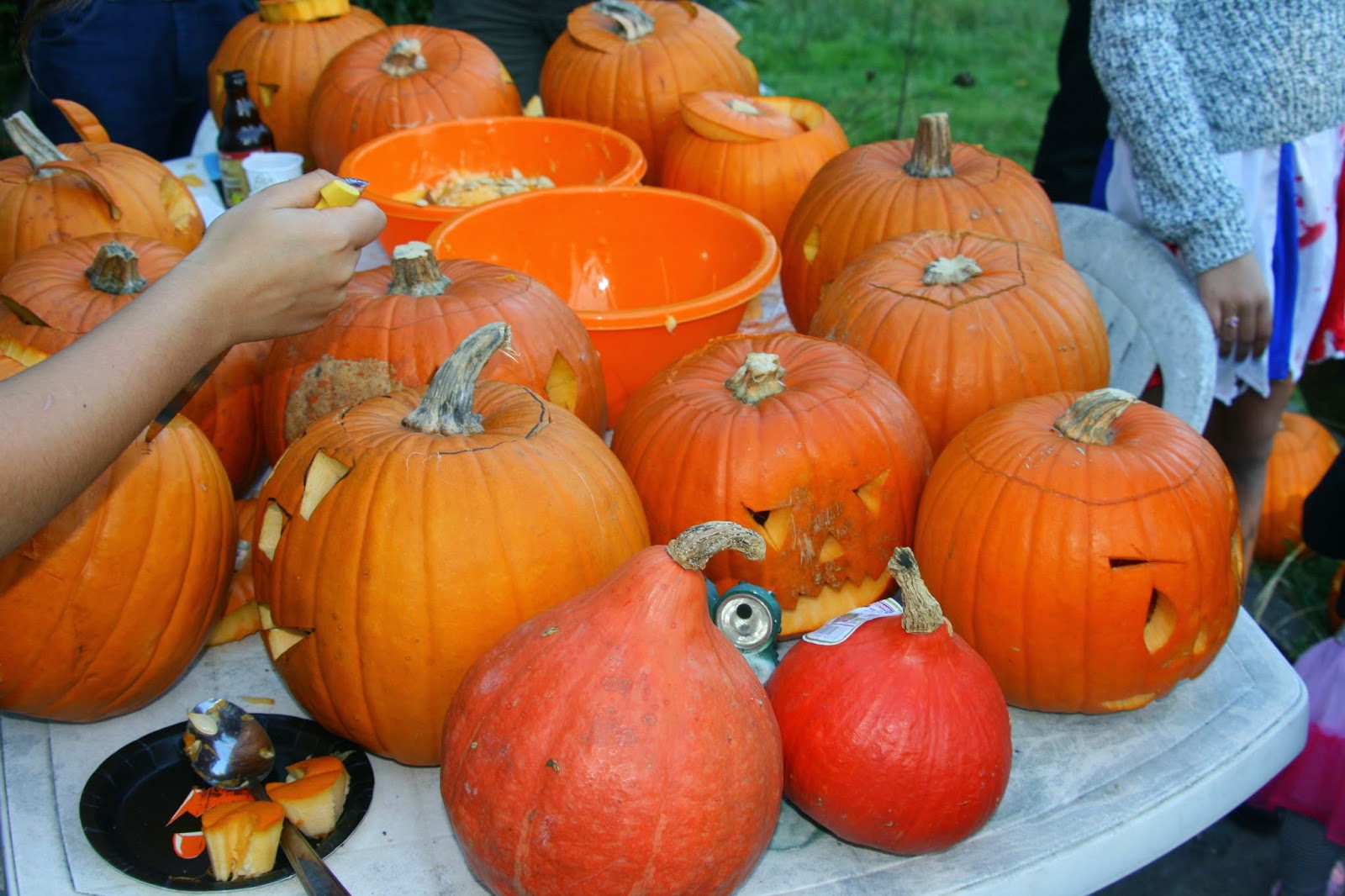 One of the fun parts of this party was to go in costume...I brought along two cats and a zombie cheerleader. The girls had a blast doing their make-up and it was fun to see them excited to dress up! 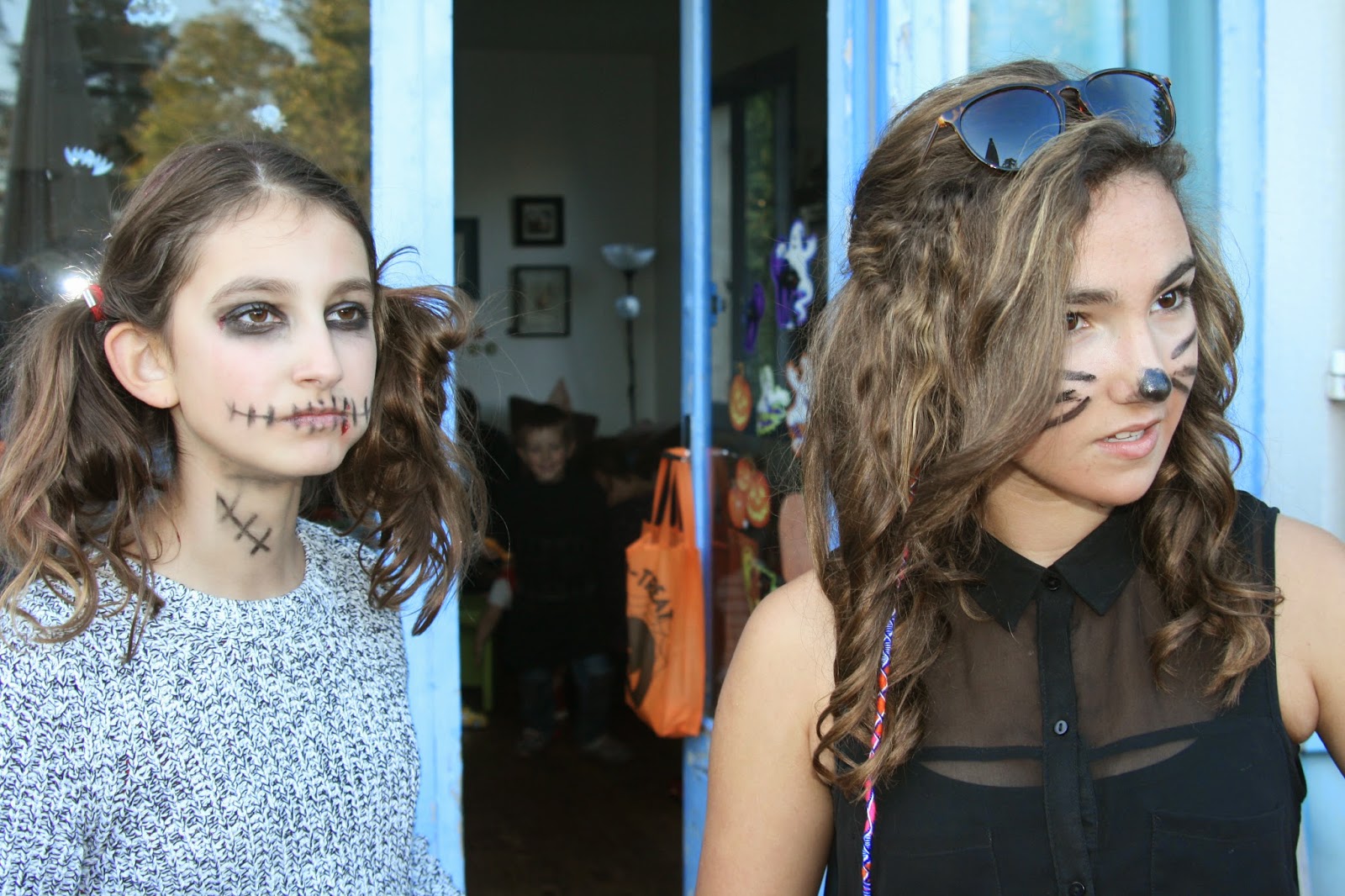 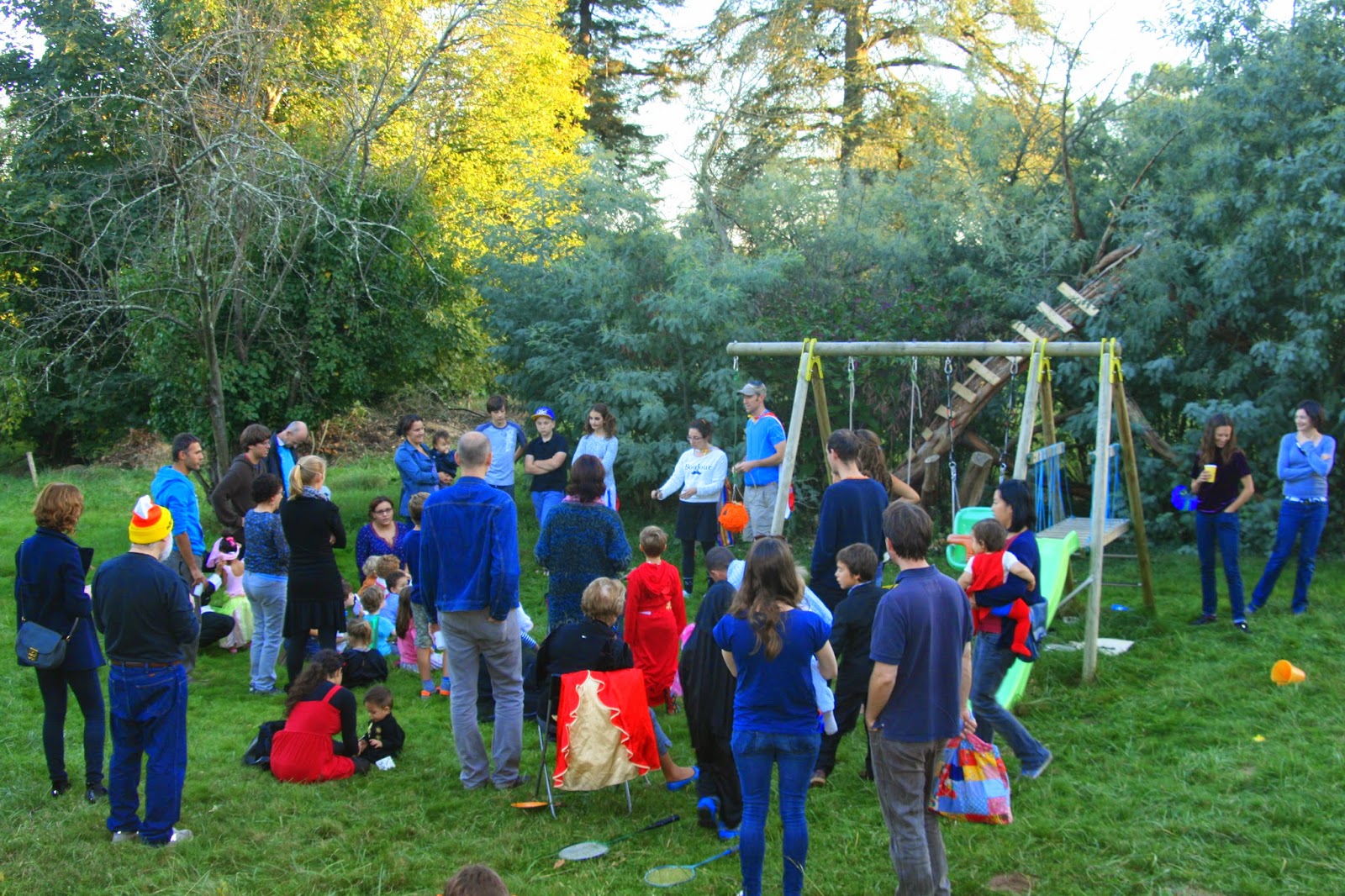 It was a great turn out and a wonderful afternoon/evening.  Our hosts also provided 3 pinatas for the kids to knock down.  This was great fun for all and we divided the kids by young, middle and older groups.  As darkness fell, groups went trick or treating around the grounds - Several of the adults took jack-o-lanterns to indicate where there would be candy and the kids got to do a small version of trick or treating at the party.  What was also fun about this group, is that it's not just foreigners, there are also French people who have lived in English speaking countries, so enjoy celebrating this Anglo-saxon holiday. 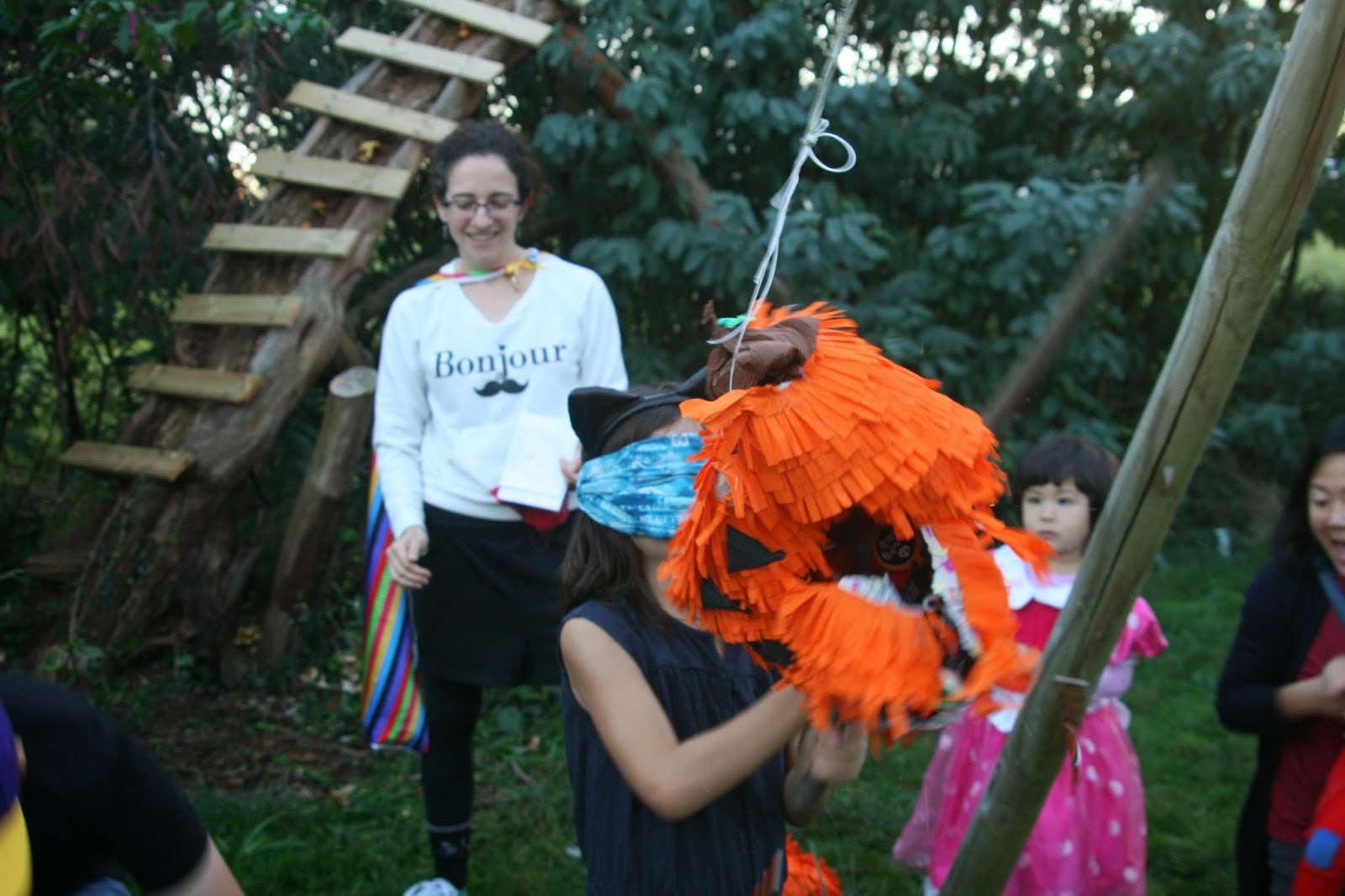 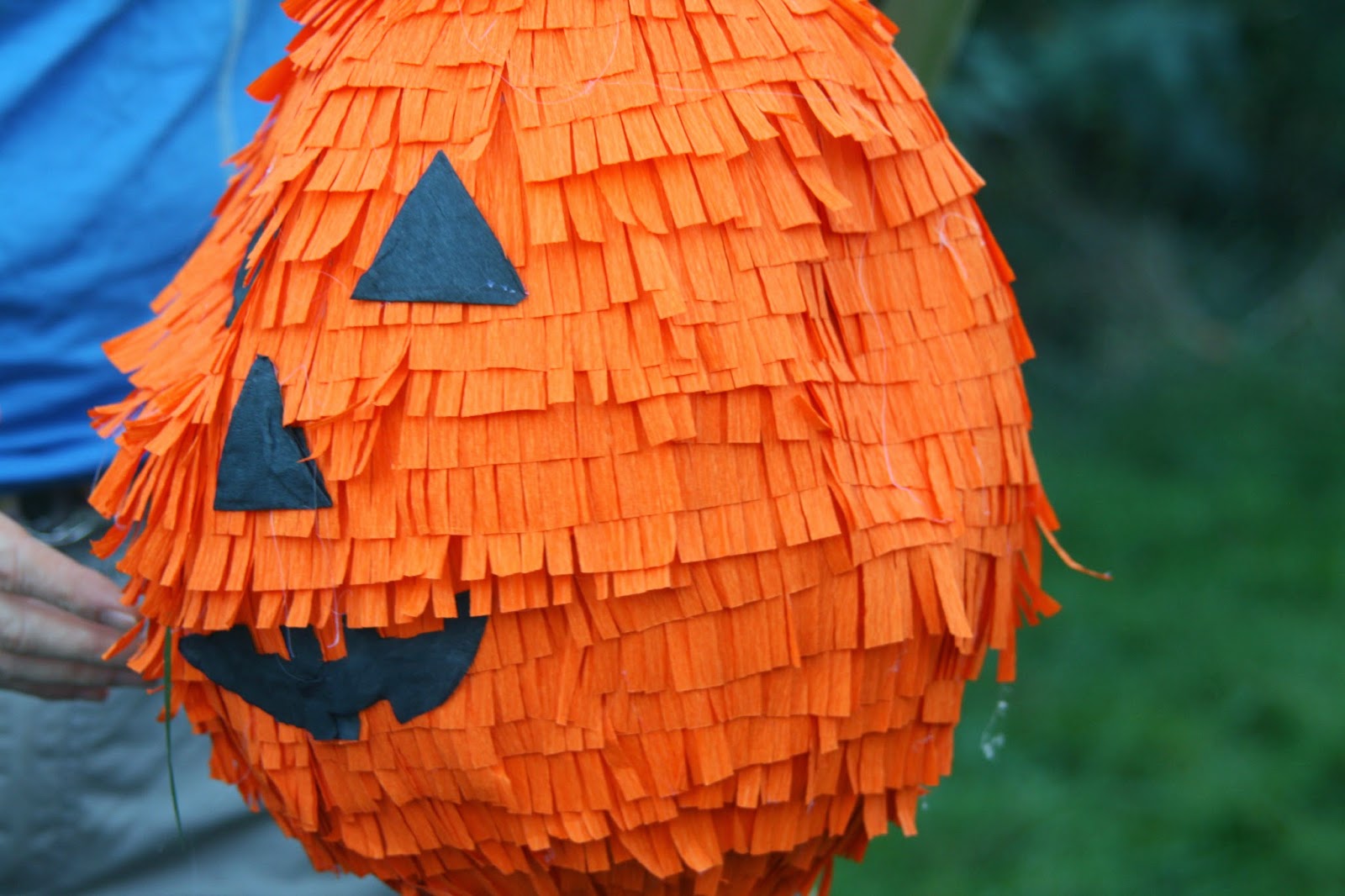 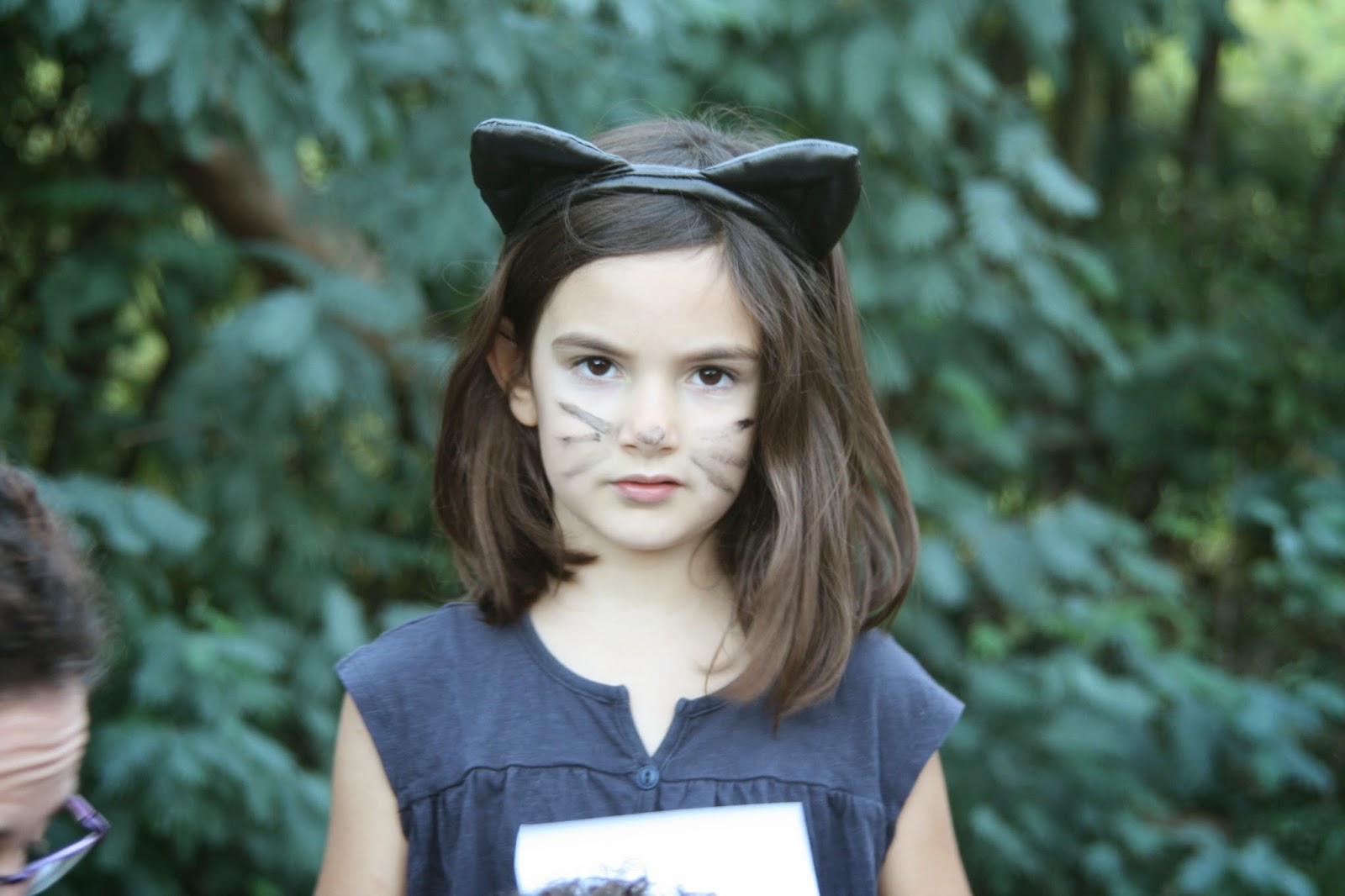 Halloween fell at the end of the two week Fall school break, so it was also nice to enjoy the party earlier in the week and then look forward to trick or treating later on.

By Halloween night, the costumes had changed around a bit - One sugar skull, a cat and a vampire witch!  My oldest went off to a friend's house where a group of her friends got together for the evening  - went trick or treating and then had a sleep over.  Halloween parties are more common here than going "trick or treating".  This year the holiday seemed to catch on more and it was fun to see people (young and old) dressed up getting on the trams and buses - obviously off to a Halloween get together. 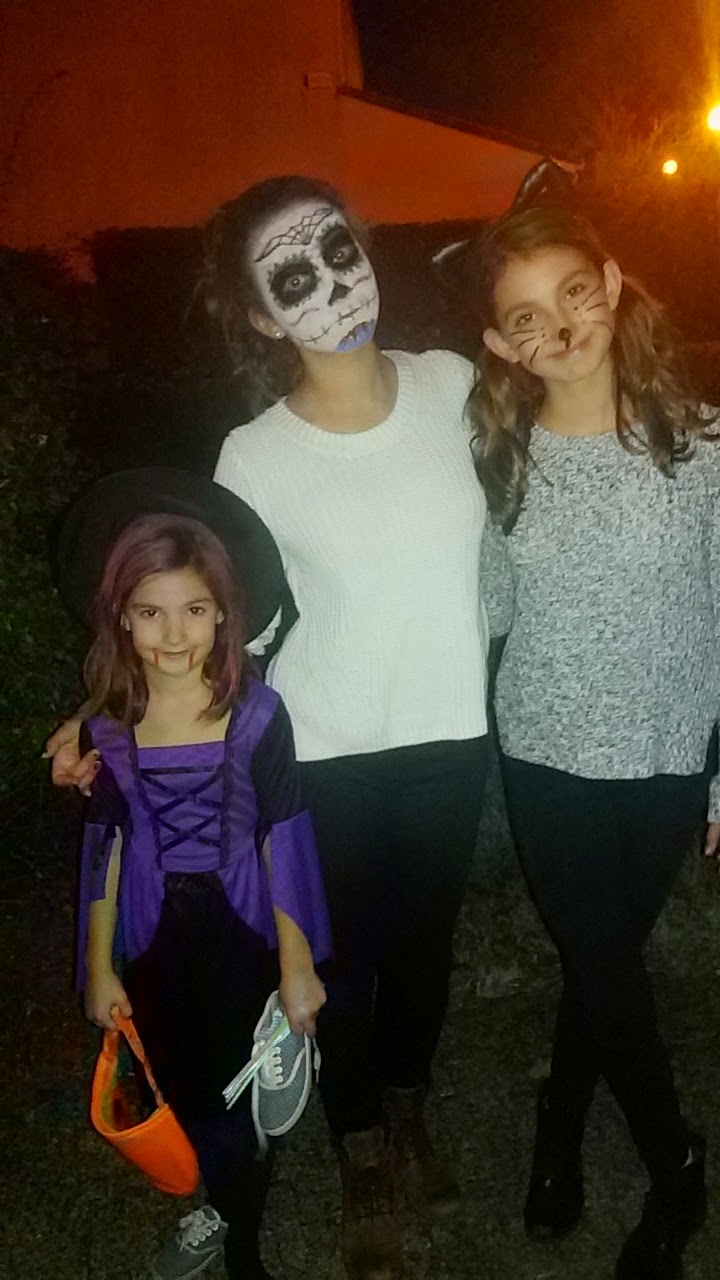 I was also amazed on the 31st, when we stopped by the party store that sold Halloween costumes, it was packed!  We just needed some face make up, but I have never seen that store so full and everyone seemed to be buying costumes!  a definite change from previous years.

I worked earlier that day and was pleasantly surprised to see this "grumpy" pumpkin at the Marche du Capucins. It's very rare to see seasonal decorations for Halloween - so different than it is in the States.  Occasionally, a storefront or inside a store selling candy would have a Halloween display, but it's rare.

If you want to see how we celebrated last year - Check out the link HERE
I, however, embraced my American heritage and we had our carved pumpkins outside for the week before Halloween and even lit them at night.  (My neighbor - understood and liked my Halloween display!) 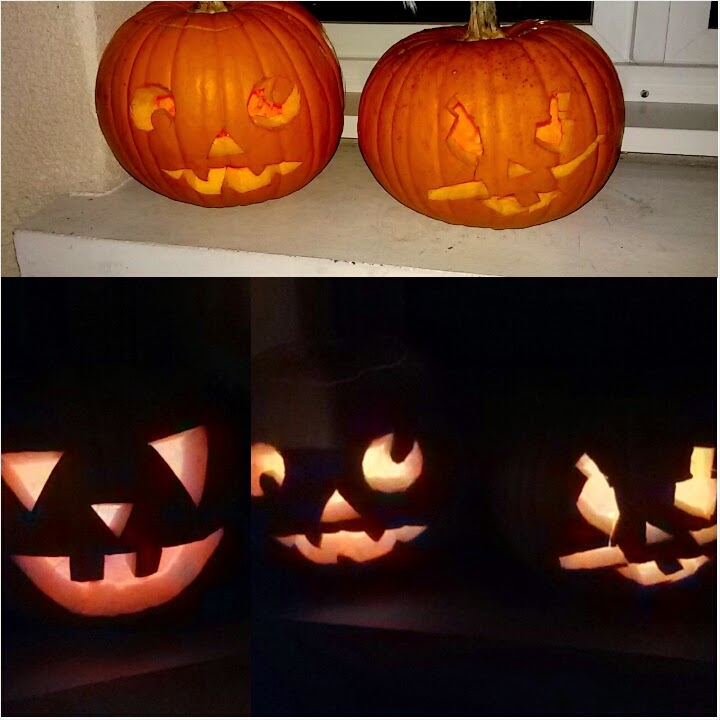 Trick or Tricking is a new concept here.  Last year, we teamed up with some French friends who decided that they wanted to try going around our town and stick more with houses that they knew had kids.  This year a bigger group got together and walked around this same neighborhood but this year they rang bells at any houses where the lights were on.  There are pockets of trick or treating going on in Bordeaux.  Certain smaller towns around Bordeaux have embraced the holiday for years and in other areas nothing happens.  Even in the city itself, a bit here and there - but most people really don't know what to do when costumed children ring their bells.  We had some American expat friends of mine join us here in our town, as their children wanted to trick or treat.

When you are a part of a new tradition that is trying to catch on, it means sometimes there is no bounty to be had.  Some people did have candy ready to give out to the witches and goblins who rang their bells.  Other people were caught a bit off guard and scrambled to their cupboards and returned with packages of cookies or a big bag of candy to share. Occasionally, it was only a few packages given to a few kids because that's all they had. Some even offered money for the kids to buy their own candy (we graciously declined these kind offers).  Sometimes, there was just nothing but a person at the door who smiled at the kids costumes and sheepishly apologized for not having anything.  The kids had fun though and for my American children, it was just nice to go out dressed up like they use to do in the States and get some candy.  I think I am happy though, that it's not where near the amount that they would be coming home with in the States. 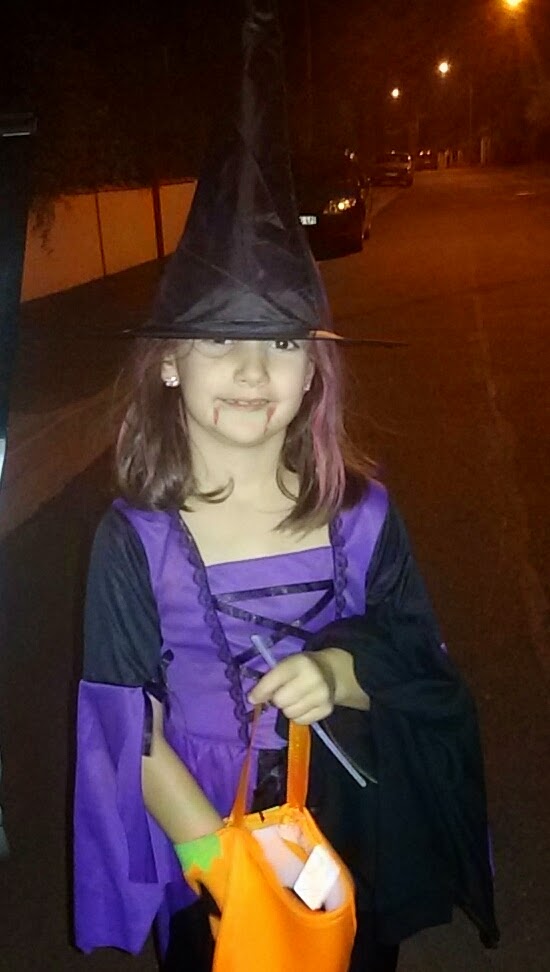 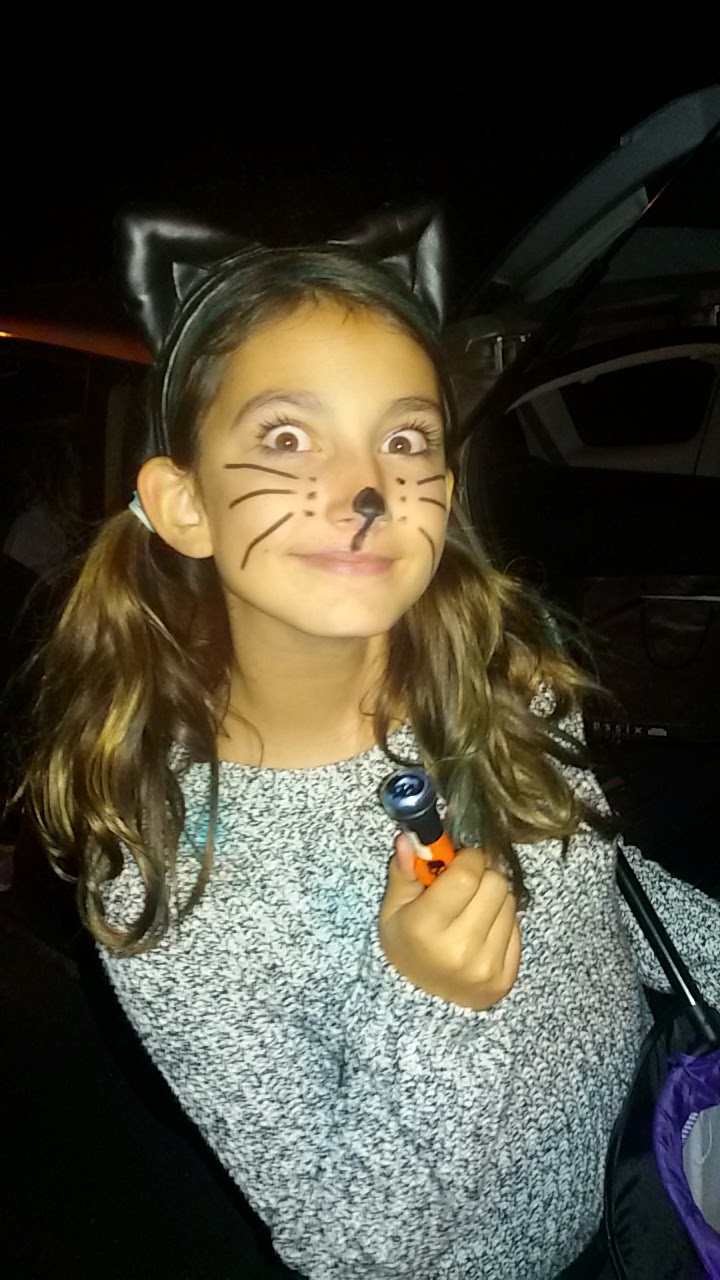 Since the distribution of candy was uneven or several houses gave large packages of candy to split up - in the end, all candy was pooled together and evenly distributed to all the kids.  Now, if you are American and you are reading this...it probably looks like a very different way to trick or treat, but when you are dealing with a "new" holiday here and also a culture trying to make it work for them - there are bound to be differences.  One thing I can say about the French culture is that they like things to be fair for everyone.  Maybe it's a part of their socialist society, maybe it's just how they think - but it's nice to see them teach the younger generation to think about others.
We returned back to the house around 8 pm with friends and we all enjoyed a pizza dinner.  Interestingly enough my doorbell rang about 6 times, each time with masked/costumed trick or treaters.  Most of these goblins were older teenagers - all polite and all very appreciate of the fact that I had packaged candy ready to give out when they said the French version of  Trick or Treat - "Des bonbons ou un Sort".  We were guessing that some of them were texting their friends to let them know which houses were ready!!  I suppose I could have had younger children too, but no one was home earlier to answer the door.  Will be fun to see how much this holiday grows in the coming years.

Hope everyone who celebrated it had a lovely Halloween!!
Now it's back to school for the girls and time to start thinking about our next American holiday - Thanksgiving!!

Posted by American Mom in Bordeaux at 2:22 PM