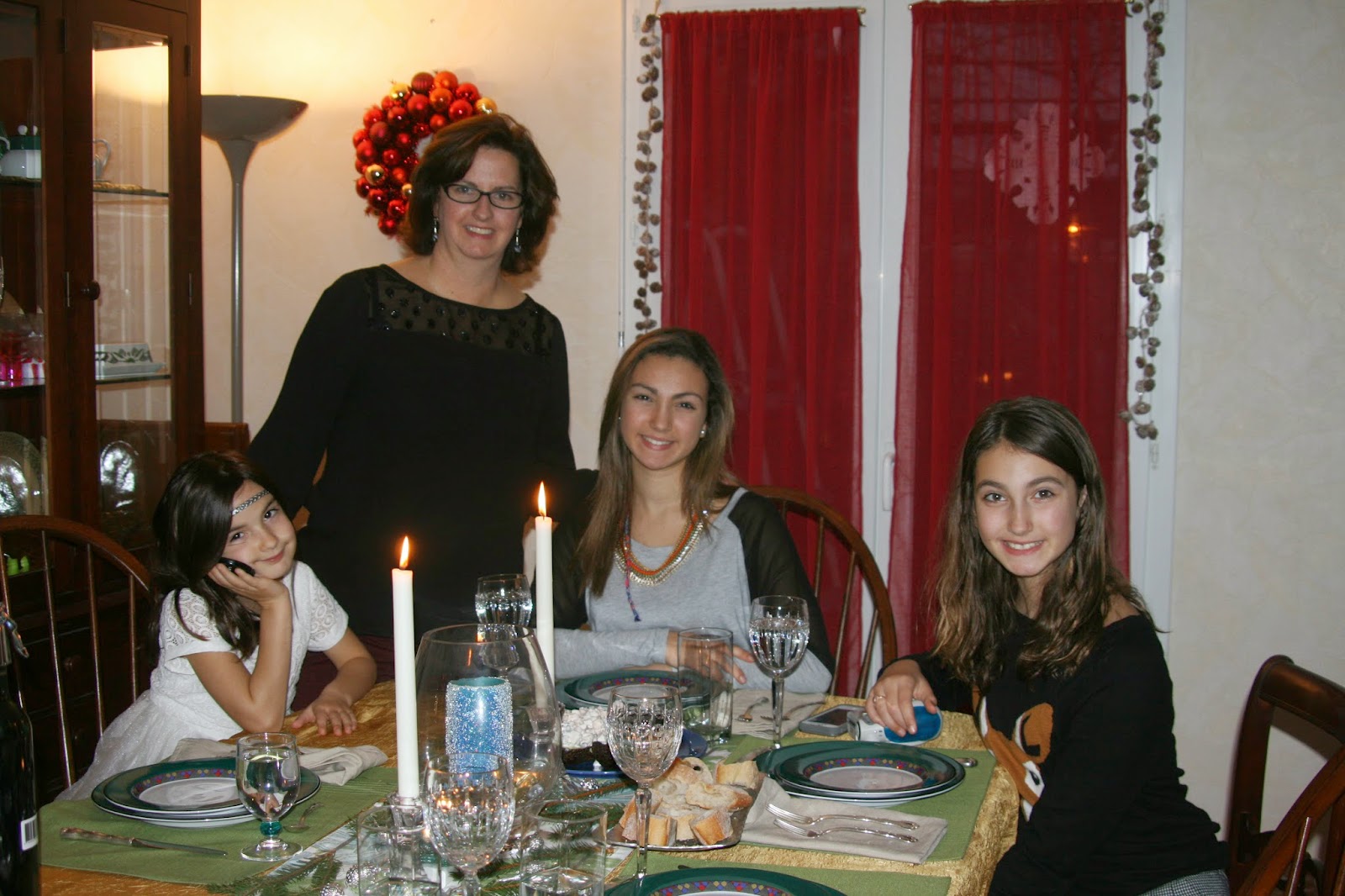 Wow - I can't believe it's the end of January already!  I inadvertently took a bit of a break from this blog.  Didn't really mean to, but I think I needed a bit of time to refresh and reorganize especially after the busy holiday season.  We all definitely benefited from the vacation and cherished our time spent together.

Wishing everyone - Happy New Year - 2015.  In France, families don't send Christmas cards, they send New Year's cards and greetings - and by tradition, they have the whole month of January to send the greetings.  It's been fun this year receiving them - each one helping me focus on this new year - new start -and new beginnings...new resolutions.  So let me take the time now to wish all my readers a very happy and joyous 2015 - May it be a wonderful, loving and joyful year for all of you.

If you follow the blog on facebook, twitter or instagram, you know that in the beginning of January - my mother, oldest daughter and myself spent a few days in Marrekech, Morocco.  Definitely an exotic trip and one that I will not forget for a while.  I took lots of photos there and will be writing some other posts about our trip - but wanted to just share a few of our initial observations.  It's a city like none other that I have been to....glad I went - but it's nice to be home! 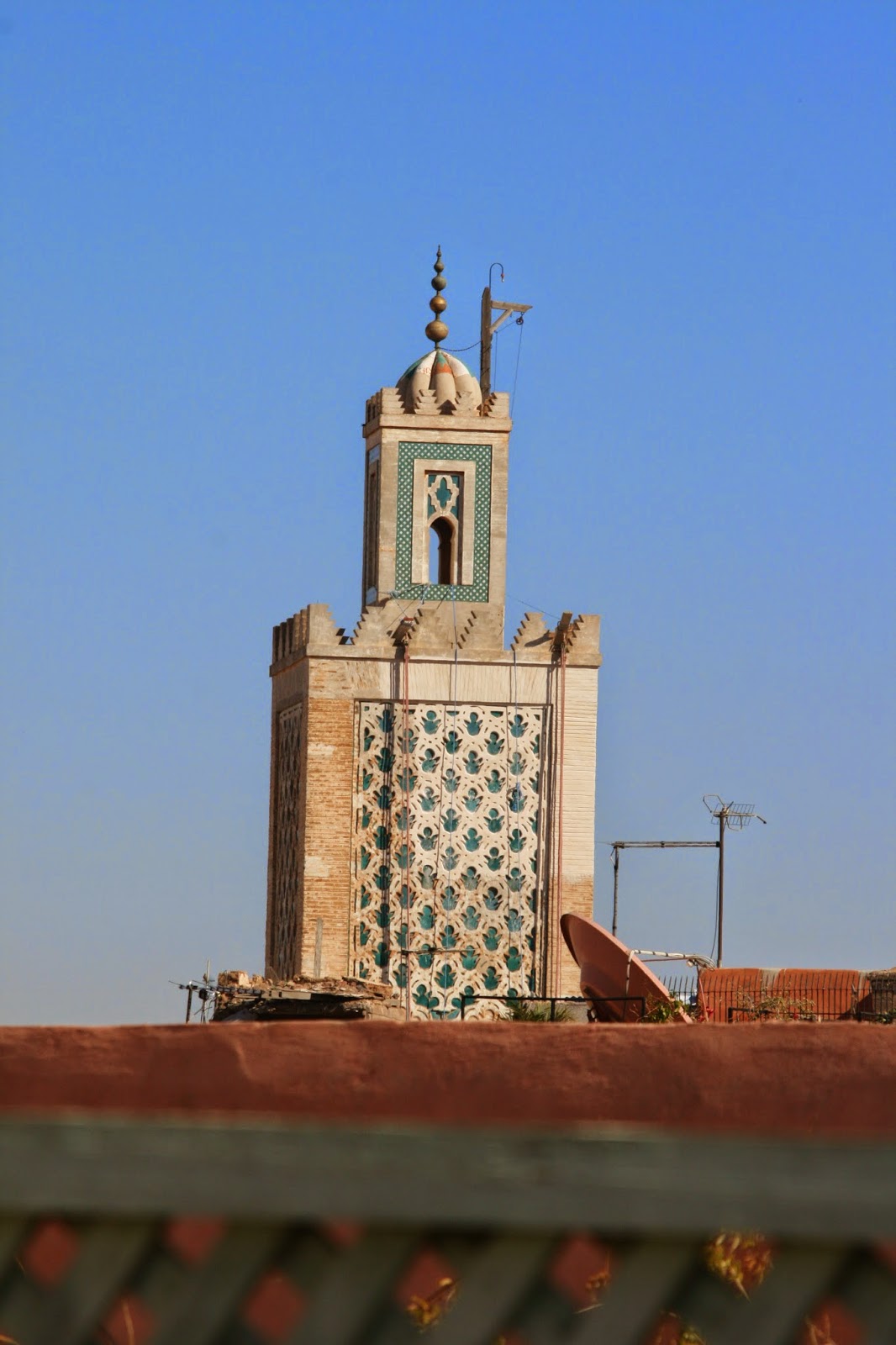 These are are few photos of our first day.  We arrived close to noon time at the airport.  We were met by a driver from our Riad (guest-house) who drove us into the old city (Medina) where we were staying.  It was a bit of a heroine ride as there seems to be no rules of the road there....Roads are shared by cars, trucks, delivery vehicles, motos, mopeds, bicycles, horse drawn carriages and donkeys and carts....when approaching an intersection - everyone wants to get where they are going....and just keeps going...and then when one enters the old city...roads are narrow and labyrinth like...cars can only fit on certain roads..  We were met at a square by the owner of our riad, in the chaos of everything happening around you - our bags were placed in a cart with a porter and we were asked to follow to go to the riad.  I'm not kidding when I say we walked down a narrow street - large enough only for bikes, motos, donkeys/carts and pedestrians and then kept turning right & left as we headed to our riad.  It was truly a maze and everytime a moto or moped needed to pass - as a pedestrian - you moved up and stood back against the wall....so little space. 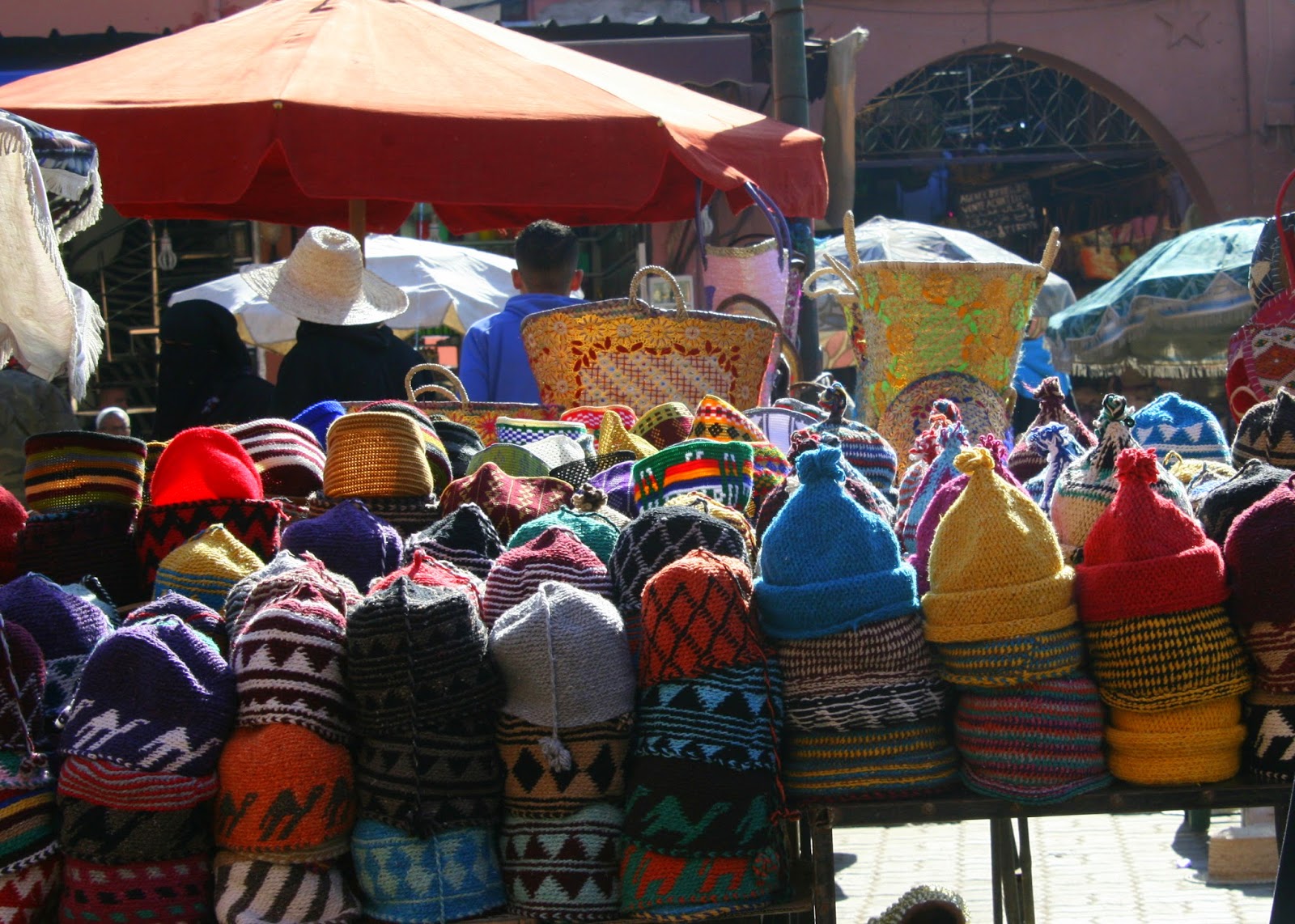 After about 6-8 right and left turns we arrived at this short small door located in a small alley.  This was the entrance to the Oasis of where we were staying....a peaceful, beautiful guest house and with a rooftop terrace.  We were offered Moroccan mint tea and went over things with the owner.  He was very helpful and made us feel immediately more comfortable.  Being given a rough map (warning - if you ever have been there are go there - the maze of the souks inside the Medina does not exist on google maps...) - so we were happy to get some directions and recommendations of where to go get lunch. 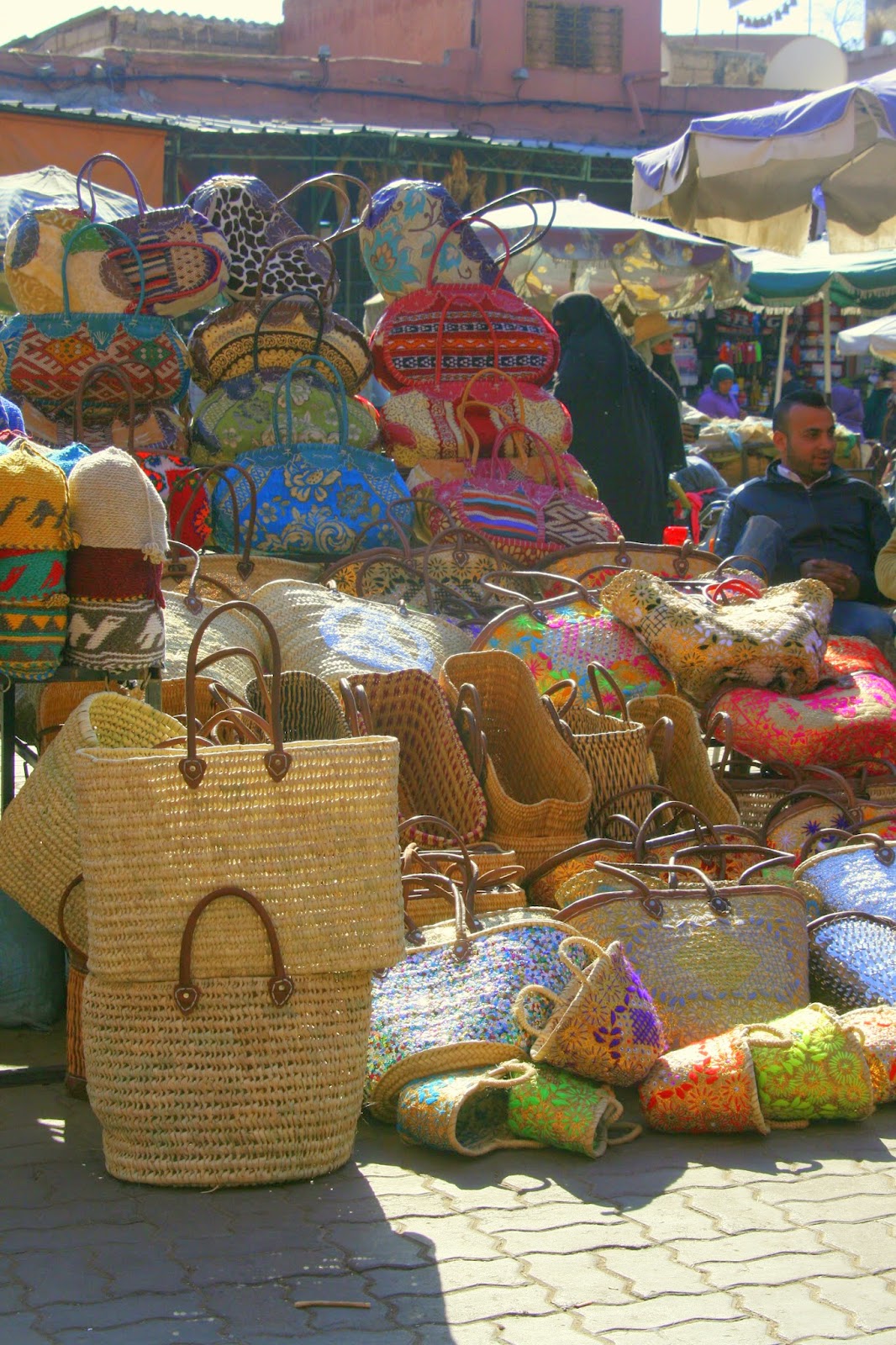 The streets are full of vendors and shops and all kinds of people.  It's a very colorful assortment of sights, smells, and sounds. 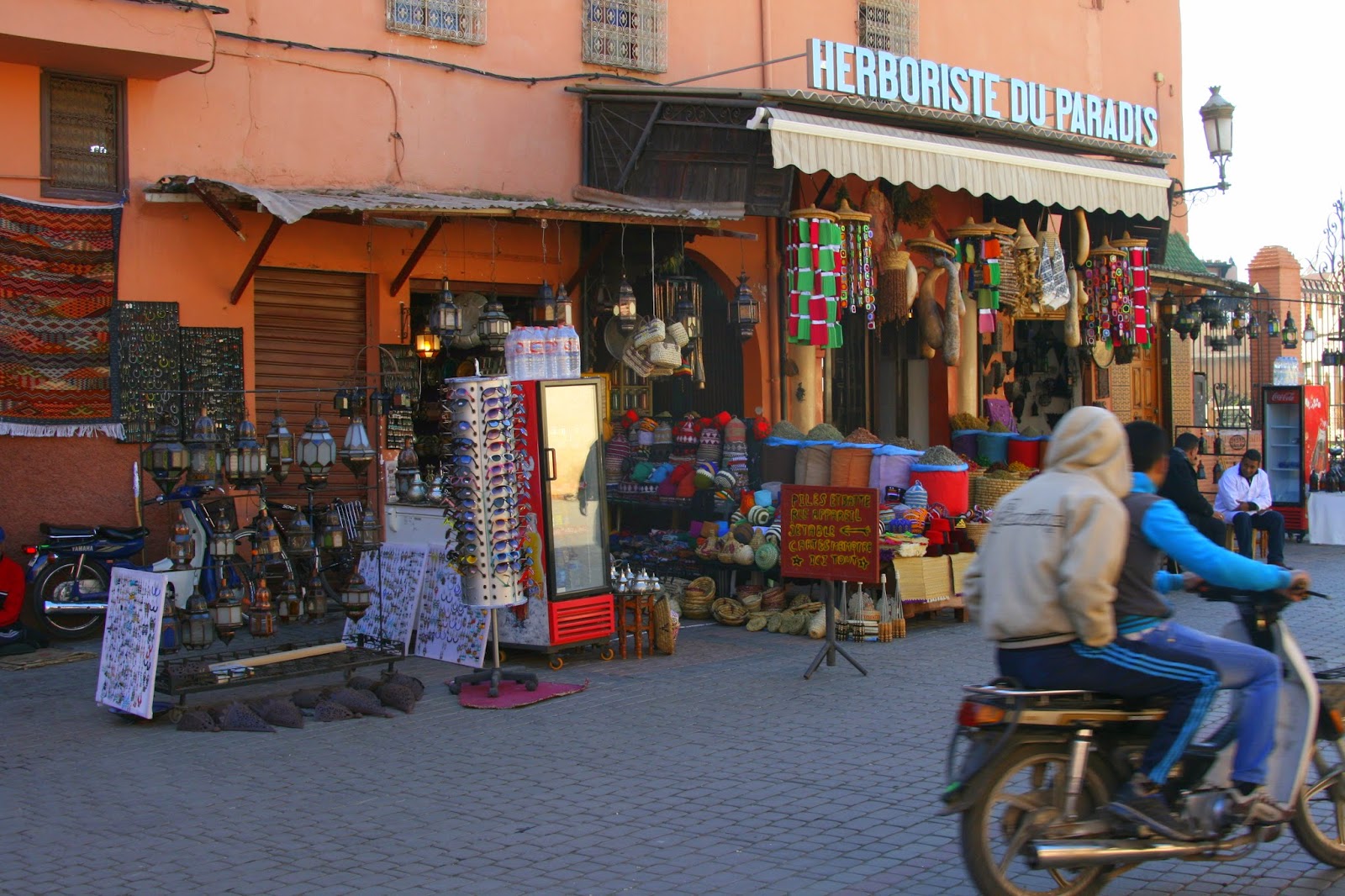 After we enjoyed a nice light bite to eat at a cafe in Place d'Epices - we headed to the Musee de Marrakesh.  The architecture and rooms alone were stunning and so different in design than what we see in Western cities. 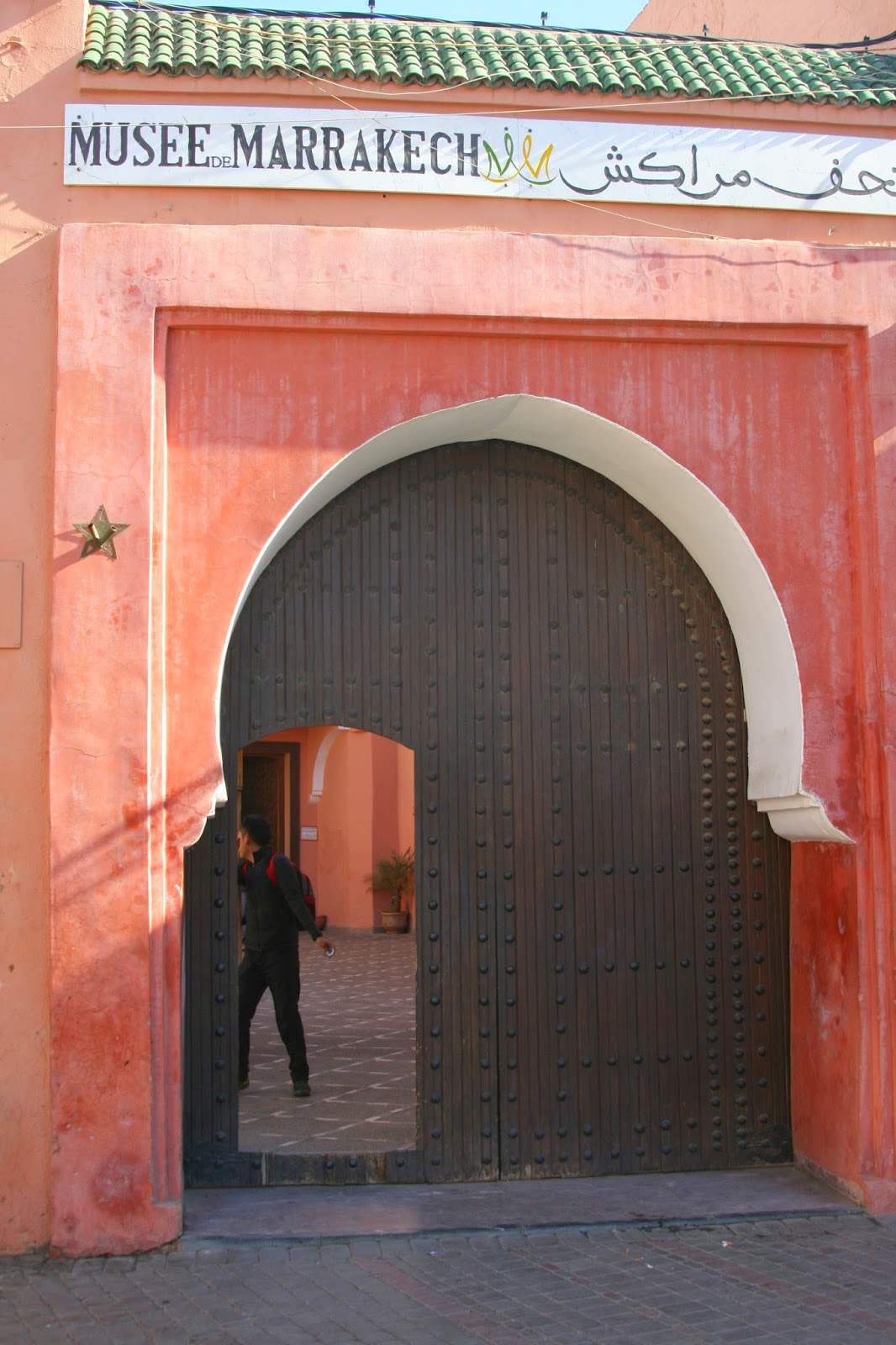 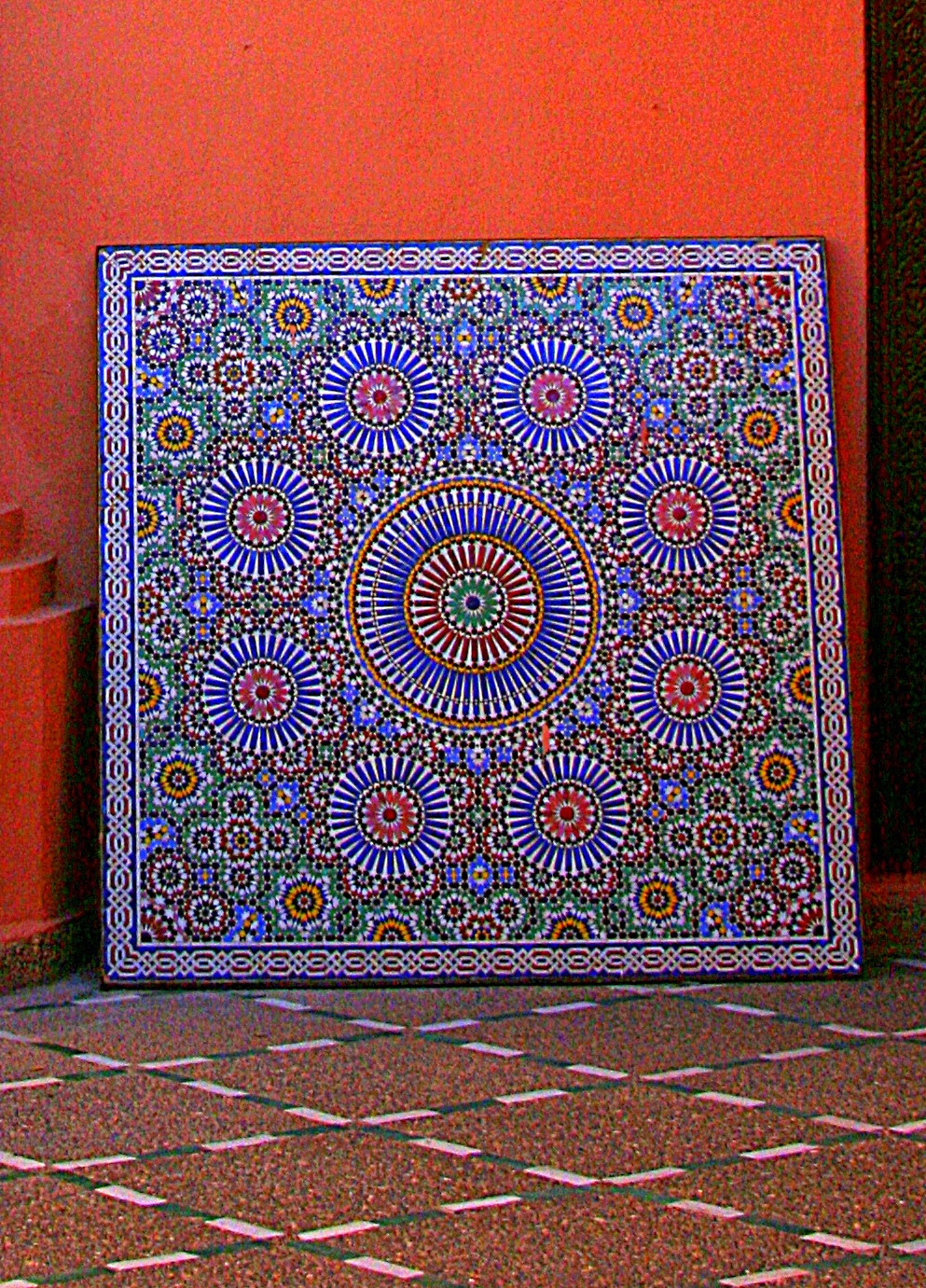 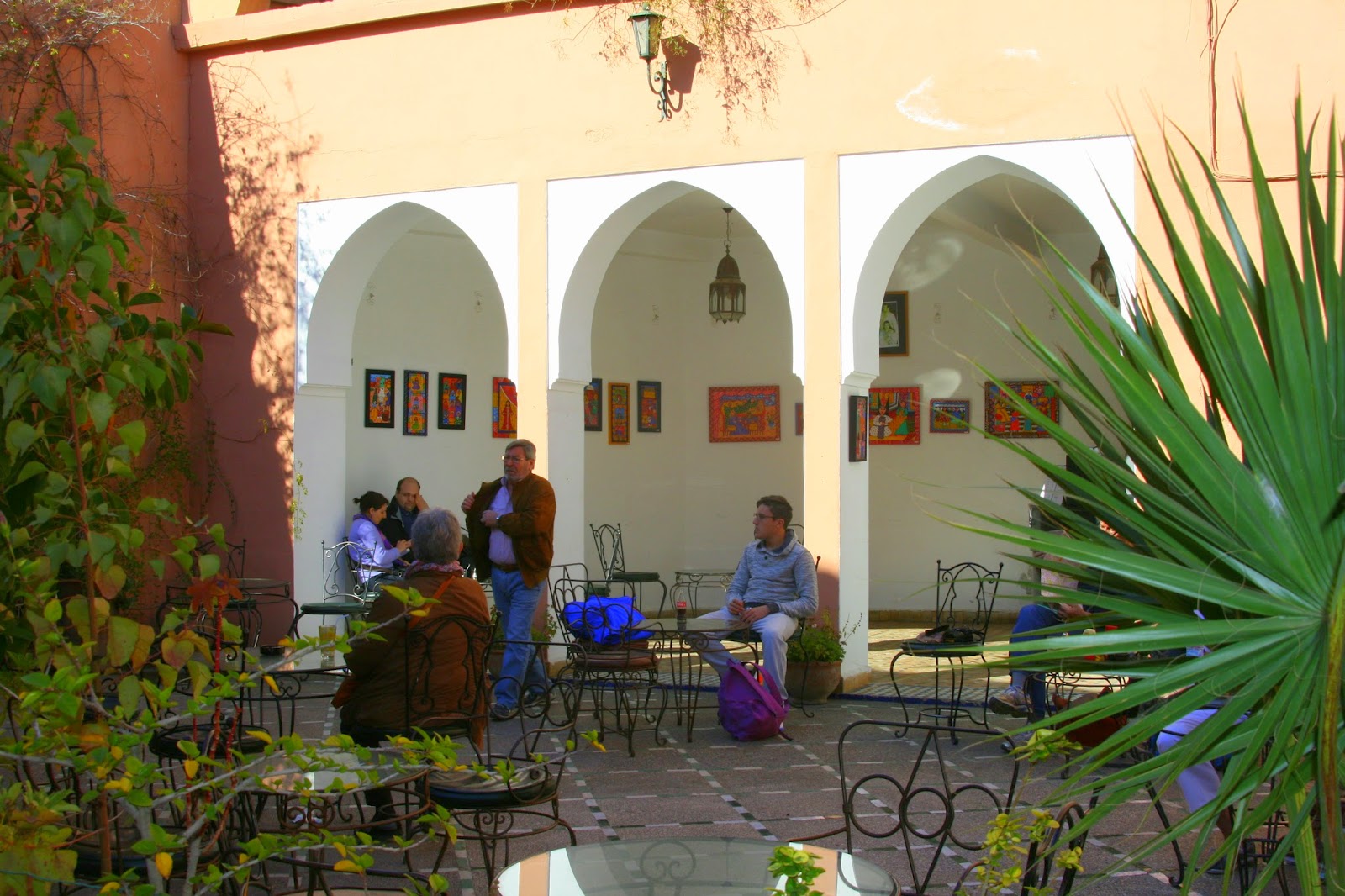 Again, inside the courtyard, a relaxing cafe and a tranquil spot away from the chaos of the streets. 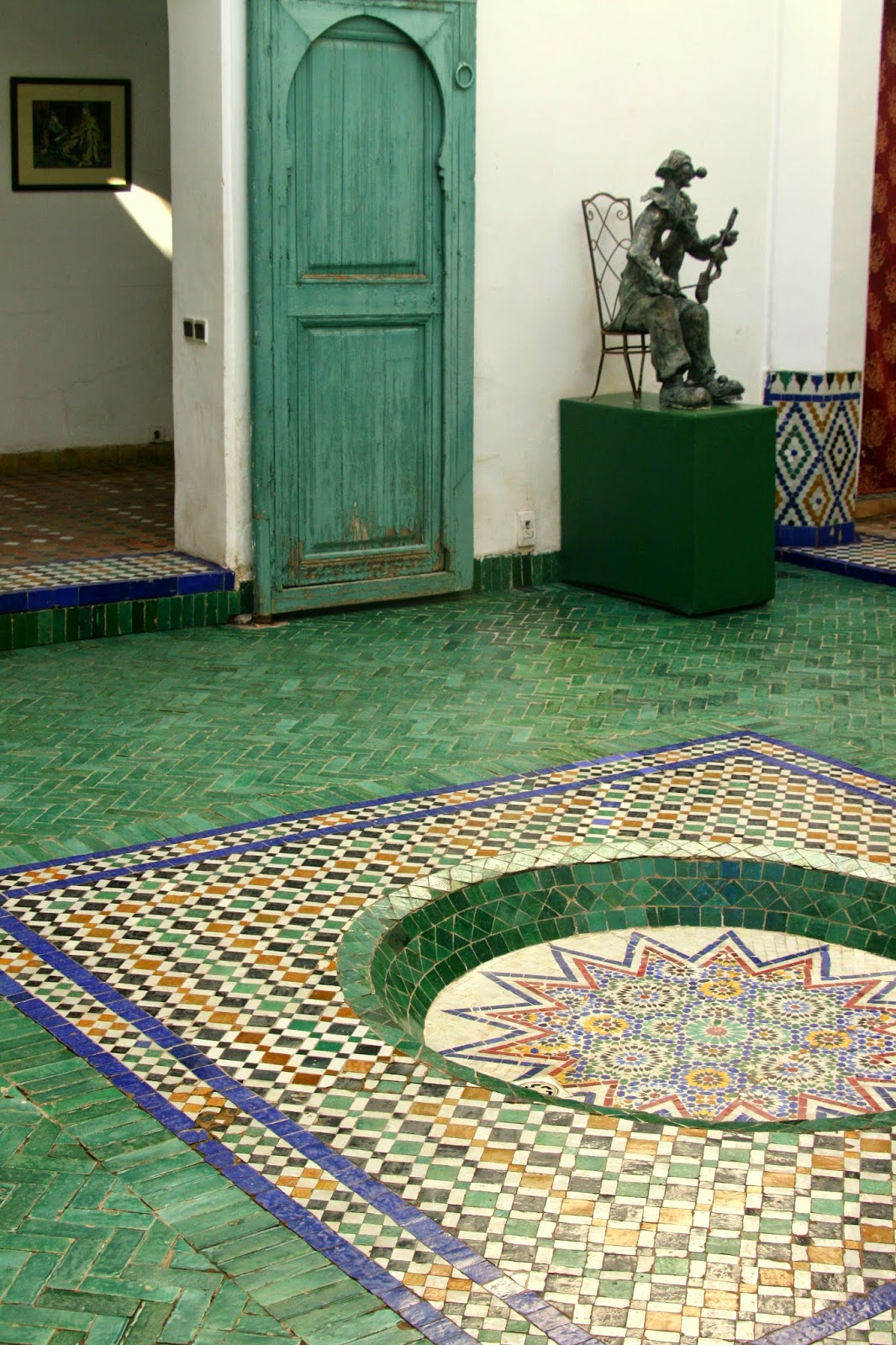 I loved all the tile work and the colors inside.  The details in the carving and paintings were so intricate and beautiful. 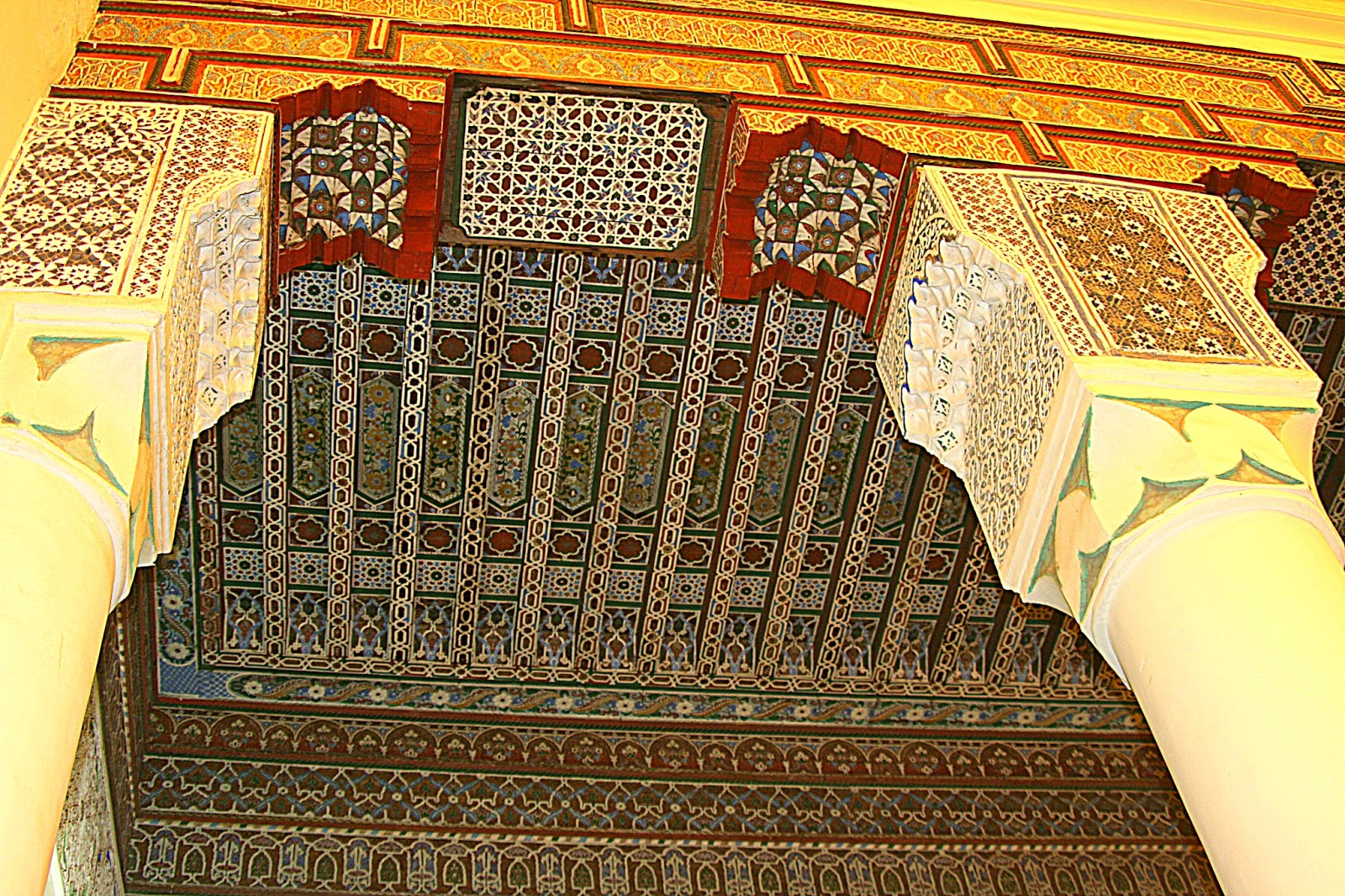 As I said, we took lots of photos....Even my oldest enjoyed snapping up some close ups of this new and different place. 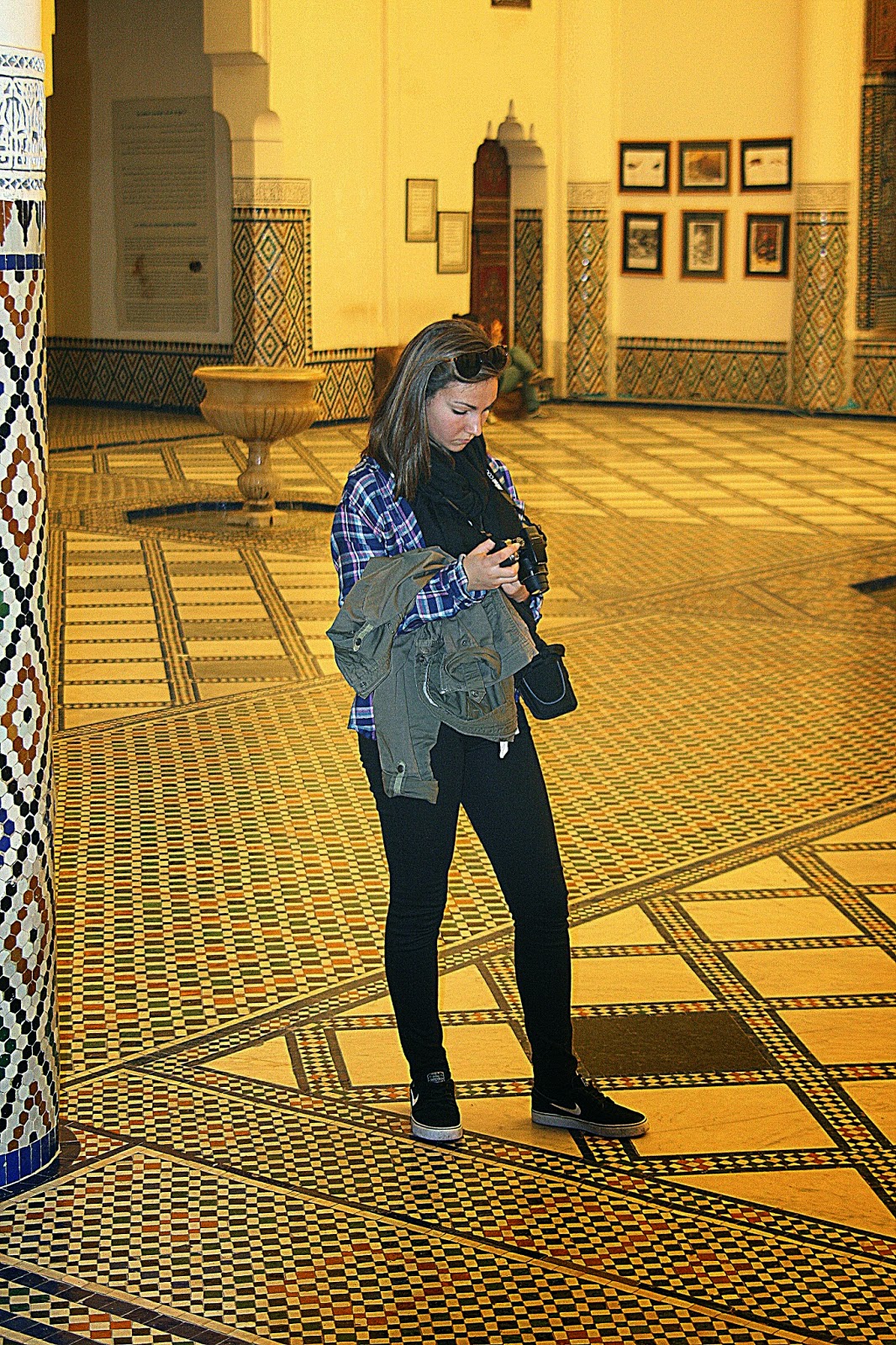 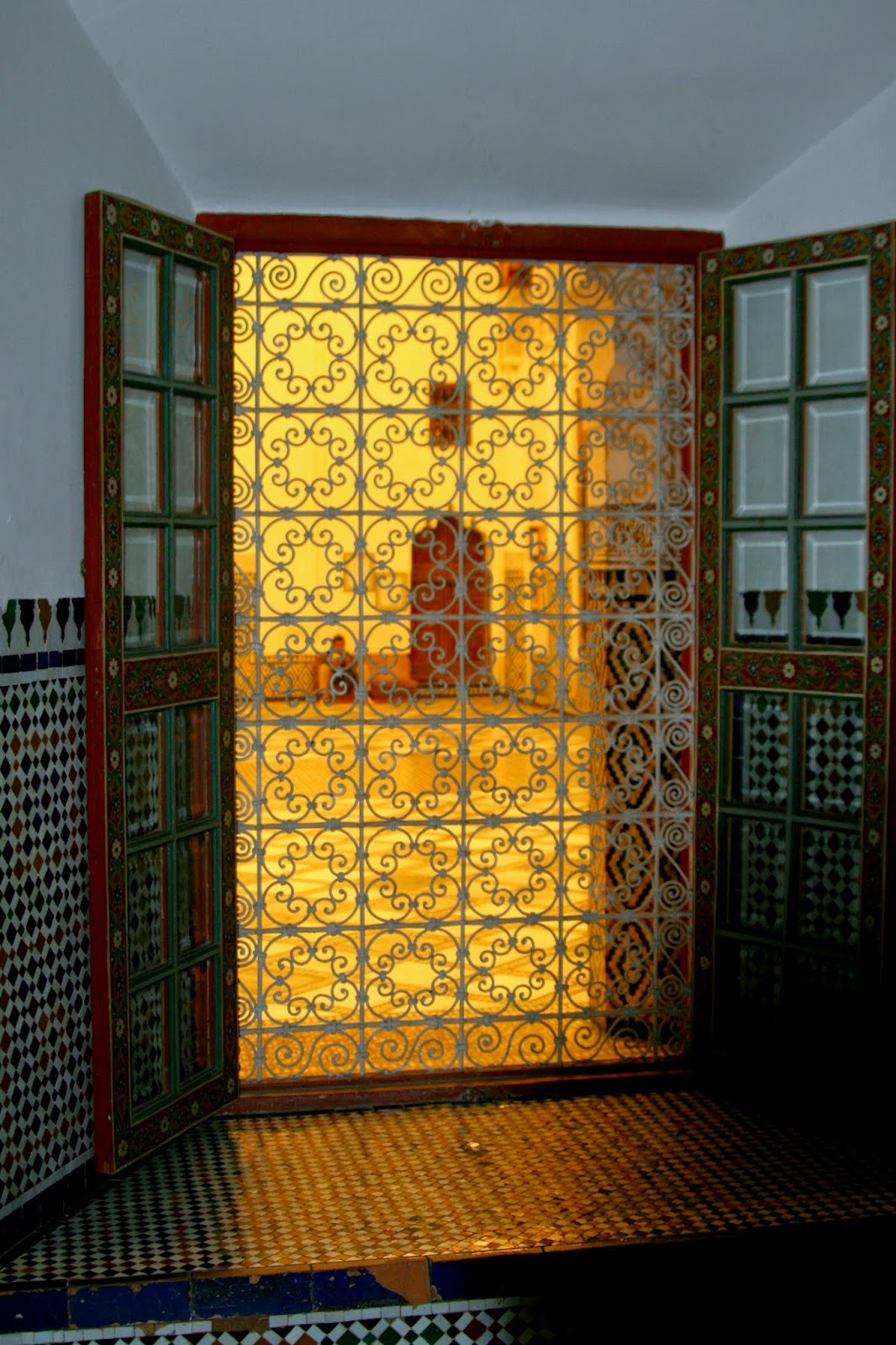 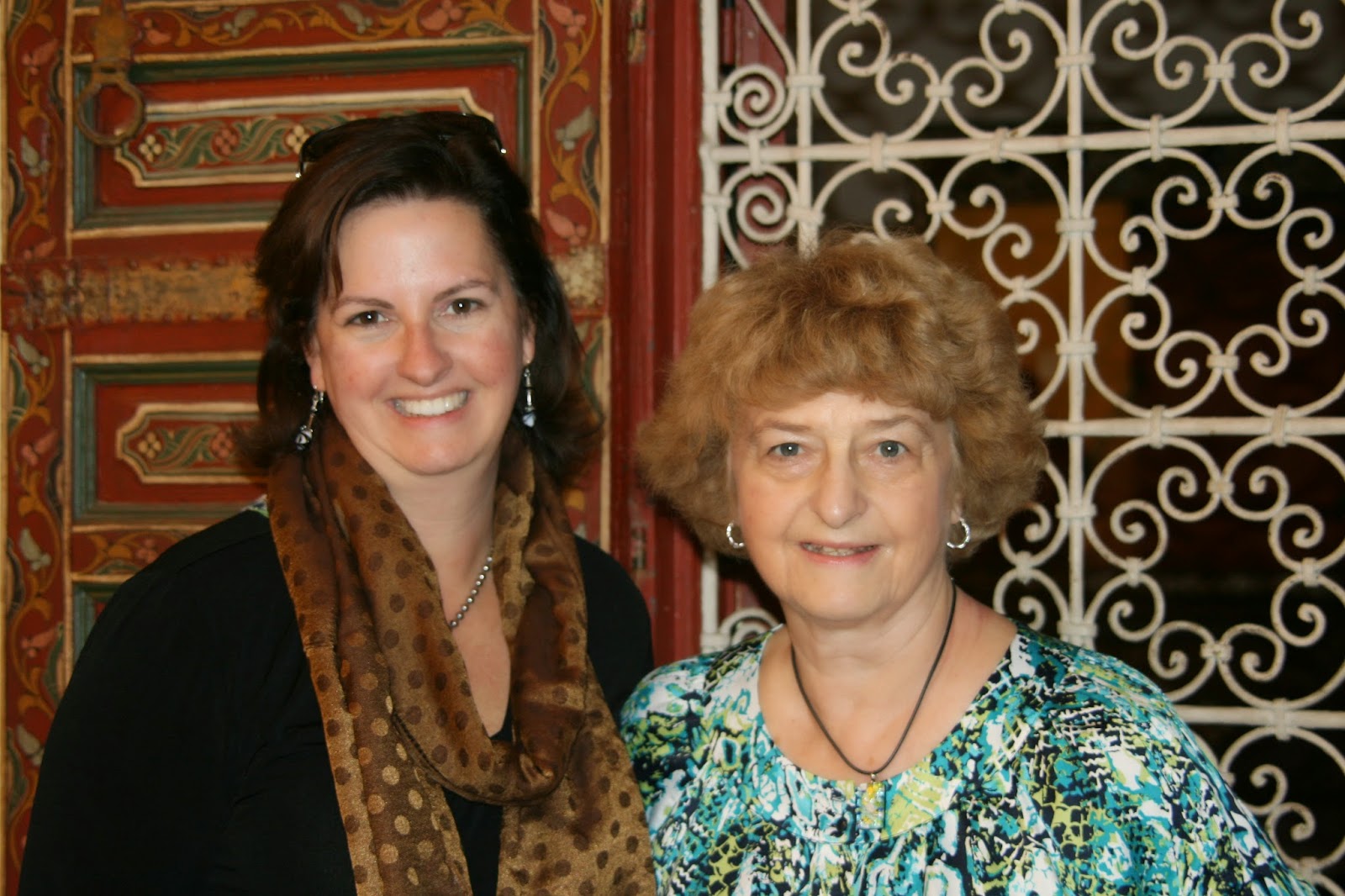 After we toured the museum, we headed back out on the streets - here's a view of how narrow some of the passage ways can be... 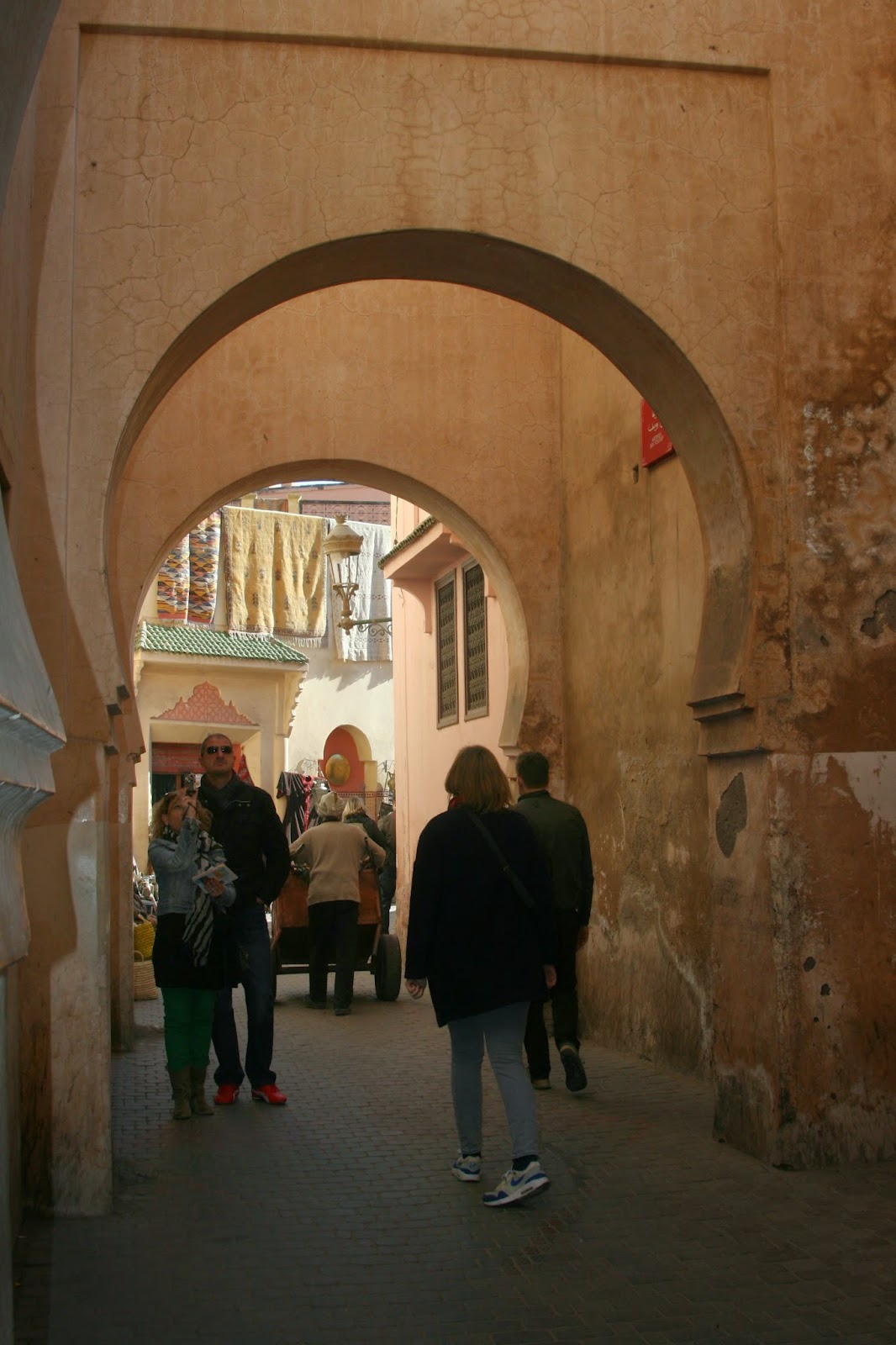 There were plenty of other tourists around but one of the things that we were advised to be aware of is that many Moroccan men and children will offer to lead you somewhere if you look lost or of need of directions.  Often you don't get lead where you really need to go and then they want money in return.  It meant that we often needed to look like we knew where we were and where we wanted to go - even though most of the time - I felt a little lost.  Even my oldest, who loves to travel, was quite overwhelmed by the whole scene and initially asked to stay at the hotel. 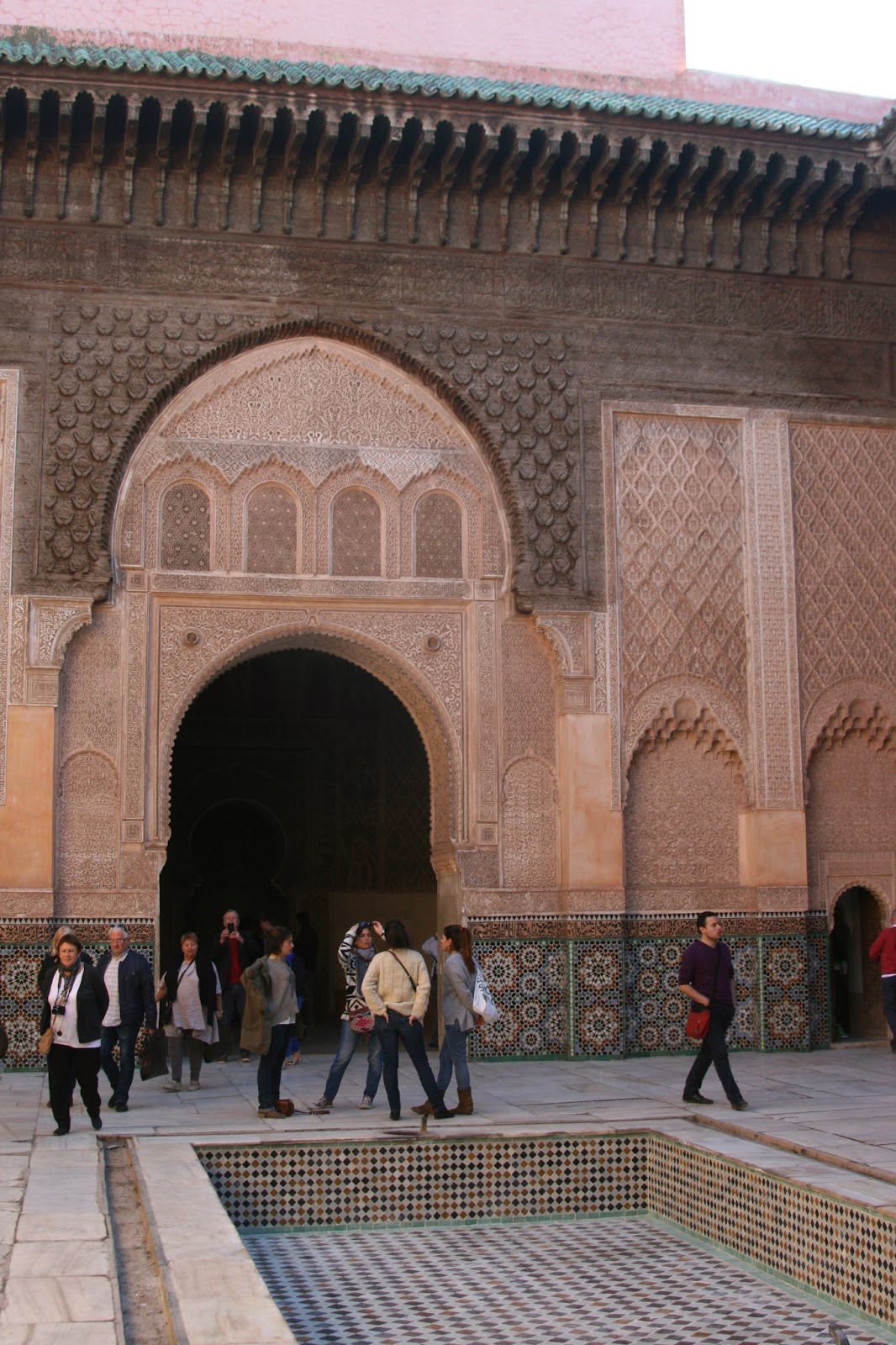 After the Musee Marrakesh - we headed to the Medersa Ben Youssef  - this was an old school and housed at one point over 700 religious students.  Again, the architecture, ironwork, archways and tiles were all stunning and so unique. 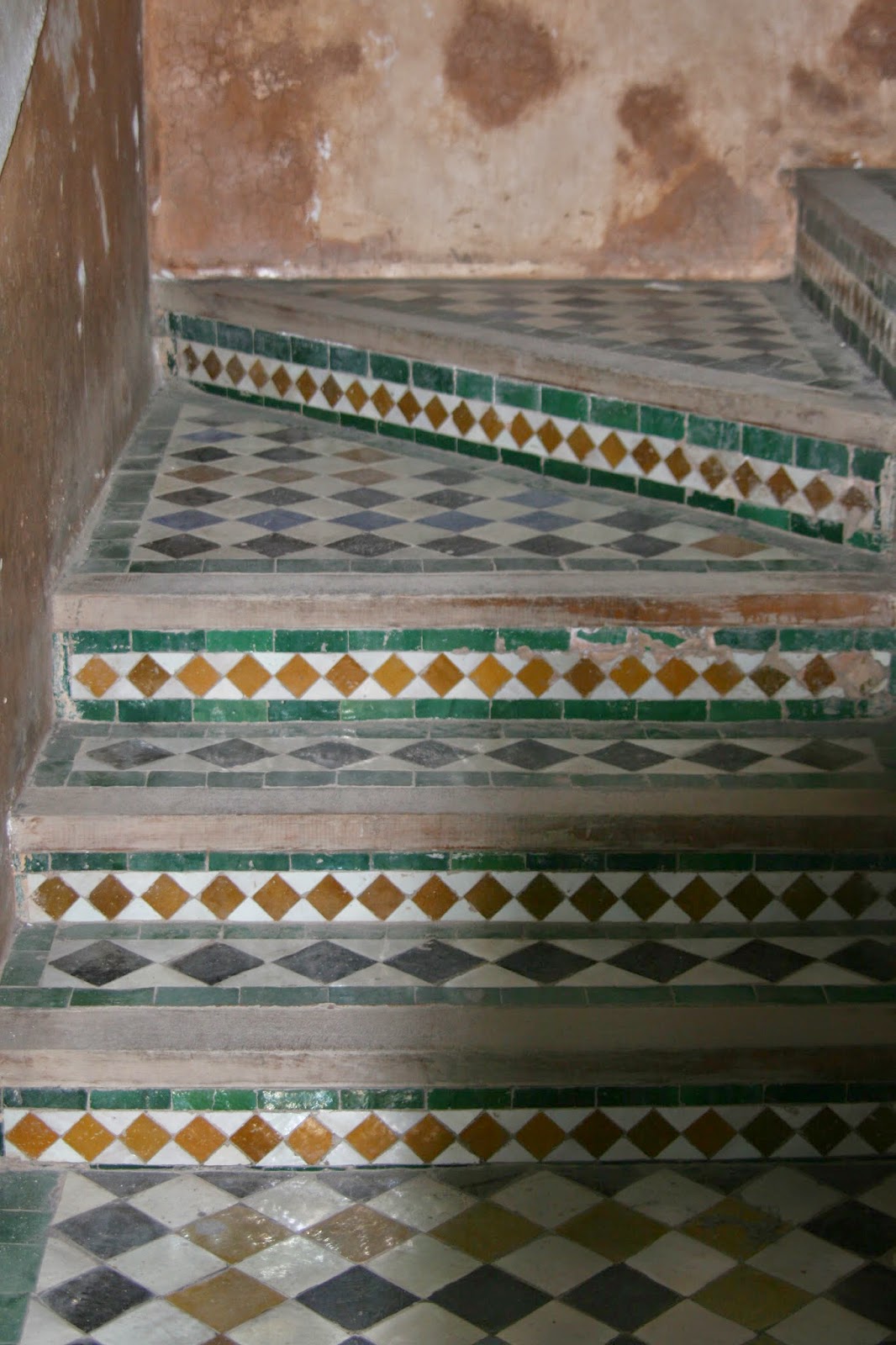 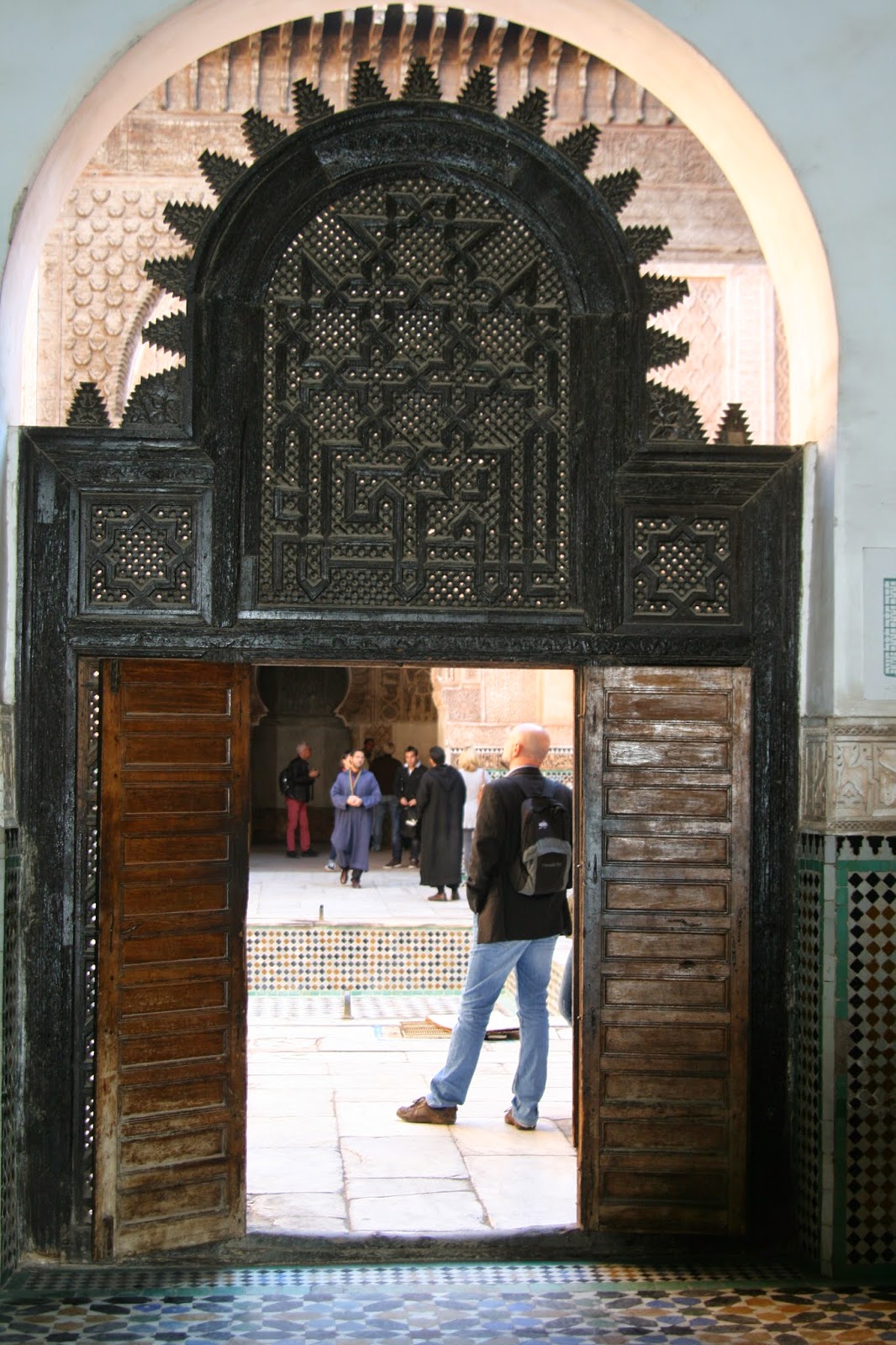 Finally back out on the streets to head back to our Riad....again this road in the following photo does not allow cars, but any other vehicle is fair game. 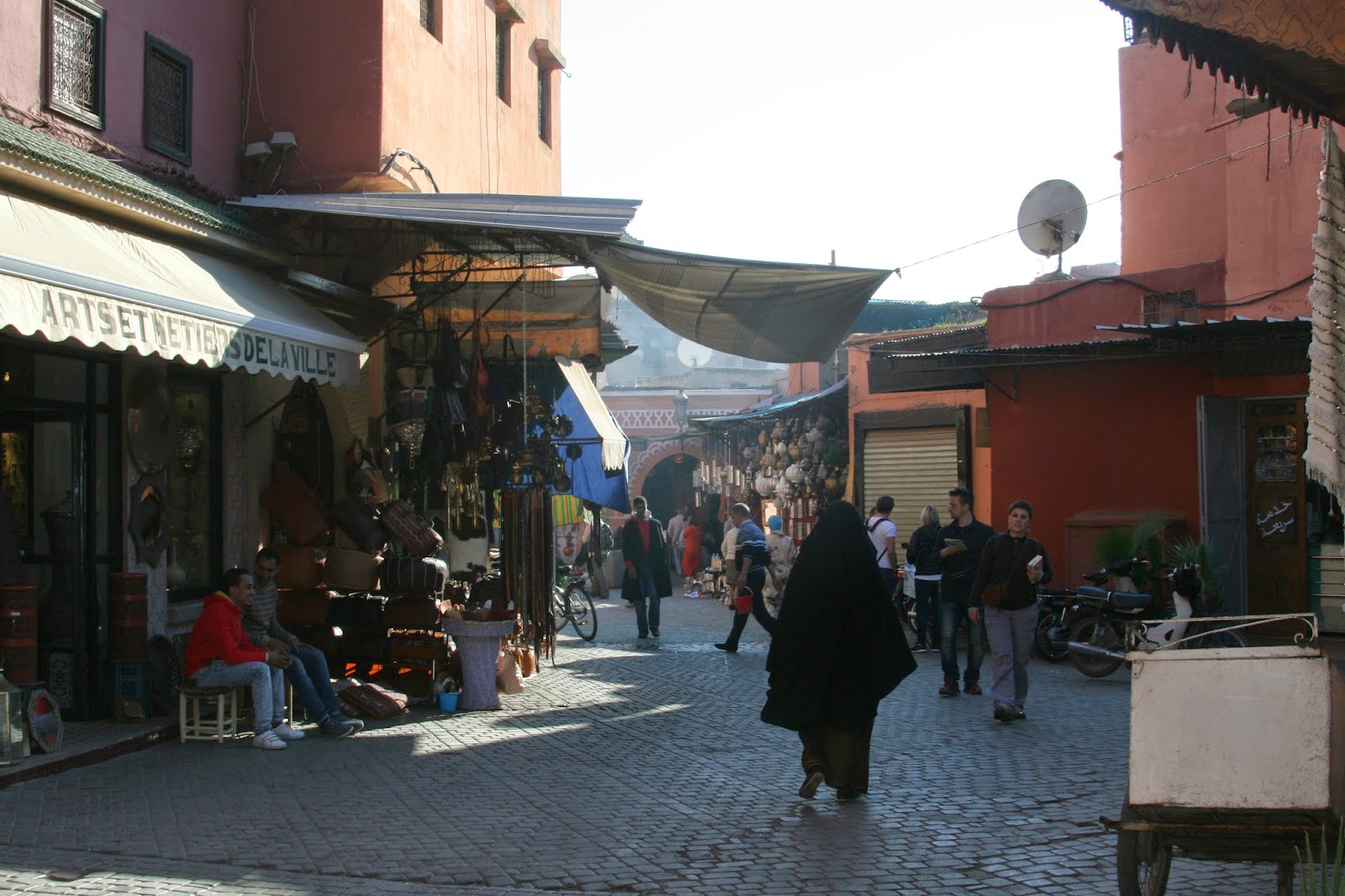 The pottery, the scares, the leather goods - all so beautiful and so different than what's in Europe.  Below are tangine cookers in the front of the photo and then assorted pottery in the back.  There is a whole game of bargaining when you make any purchase there...initially it's daunting but then it gets fun.  I found I used my French a lot there - although you could get by with English. 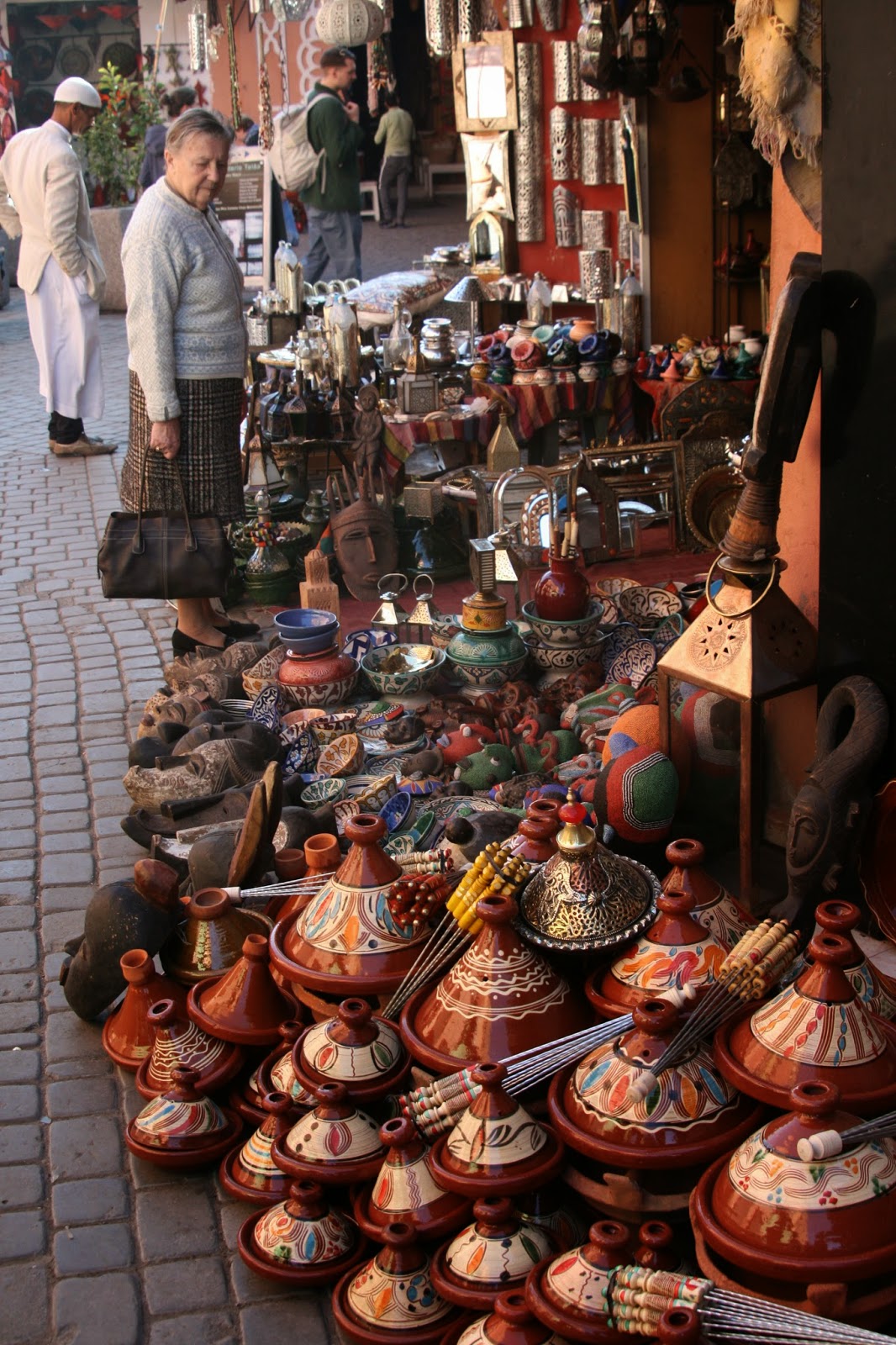 So after the initial afternoon of trying to get our bearings and exploring a bit of the Medina, we found (actually wove) our way back to our riad.  This guesthouse had about 7 rooms of various sizes and it definitely was not only beautifully decorated but also very relaxing.  Here's a few photos of the central atrium and part of the rooftop terrace. 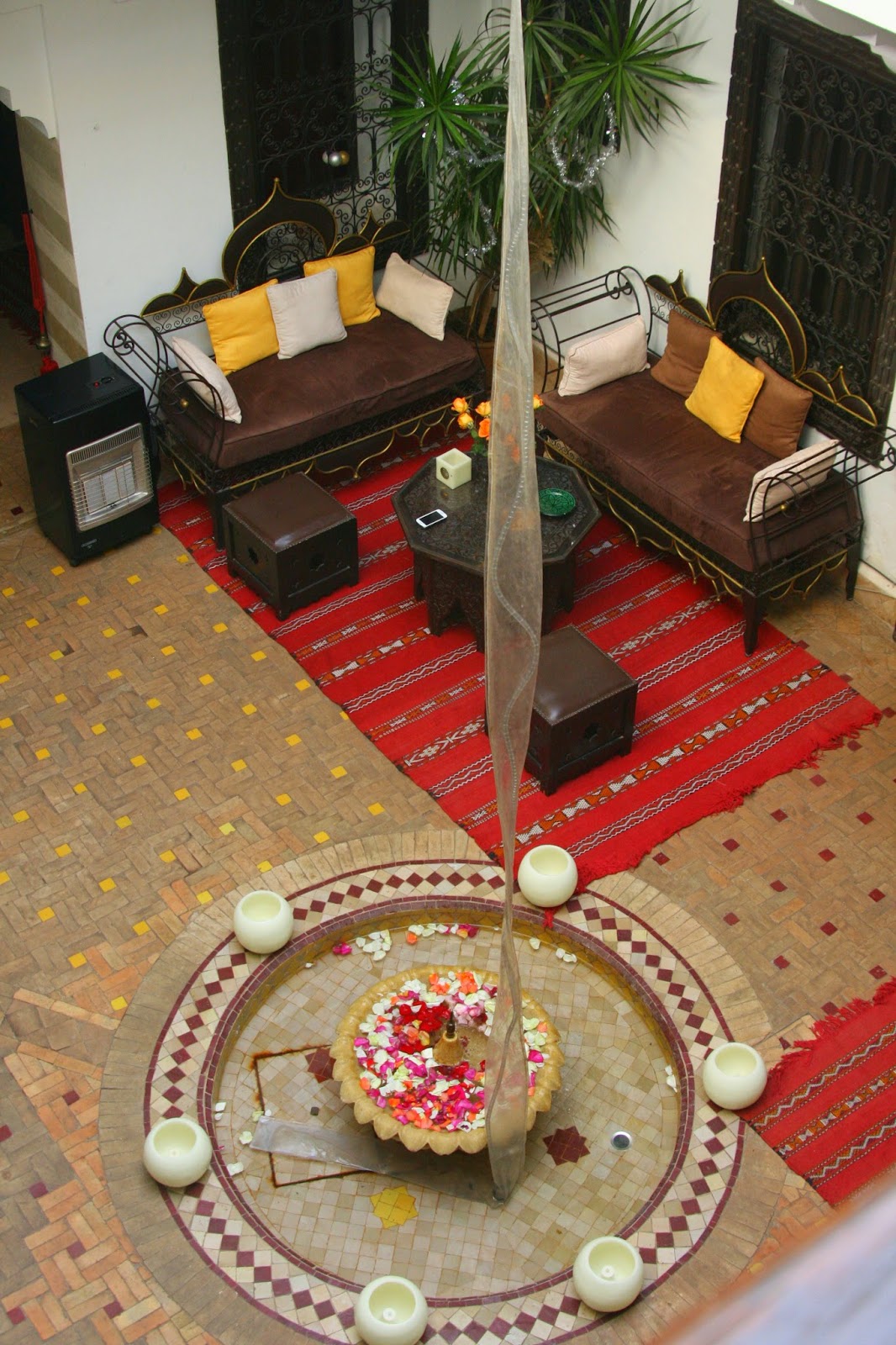 Our room was located on the 1st level (or second floor by American terms).  A recommendation that I had read was to have a room on an upper level as the main floor is a common area and can be noisy. 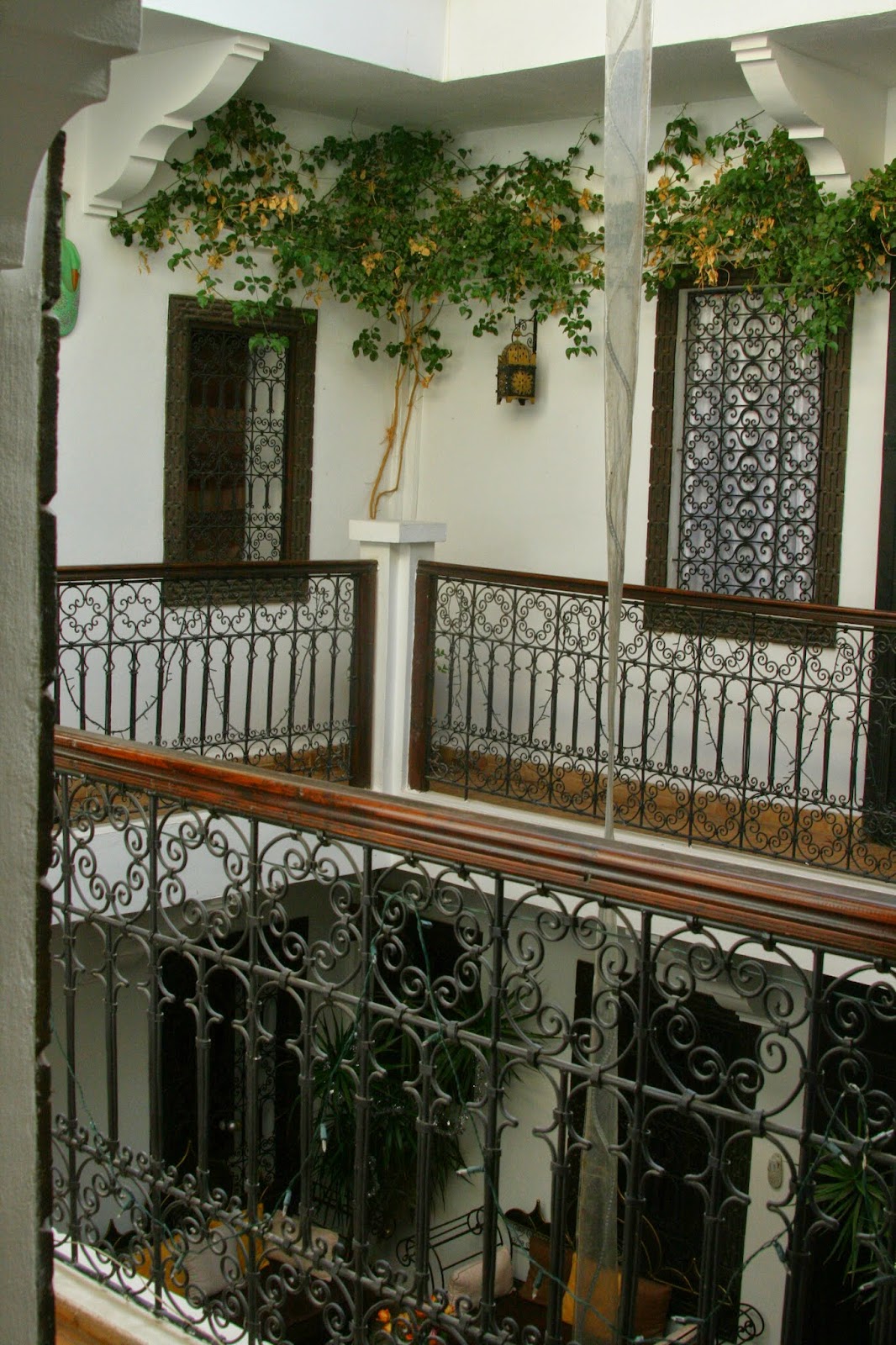 This place had lots of charm and beauty and we were so spoiled by the Moroccan hospitality!  We were constantly asked if we were fine and if we needed anything.  Each afternoon, my oldest would go ask for a snack and it was no problem - she was always given fresh fruit and almond cookies.  Each evening I found solitude in relaxing downstairs in one of the common rooms.  They would move a portable heater near me and turn on relaxing music....Ah, the life!!! 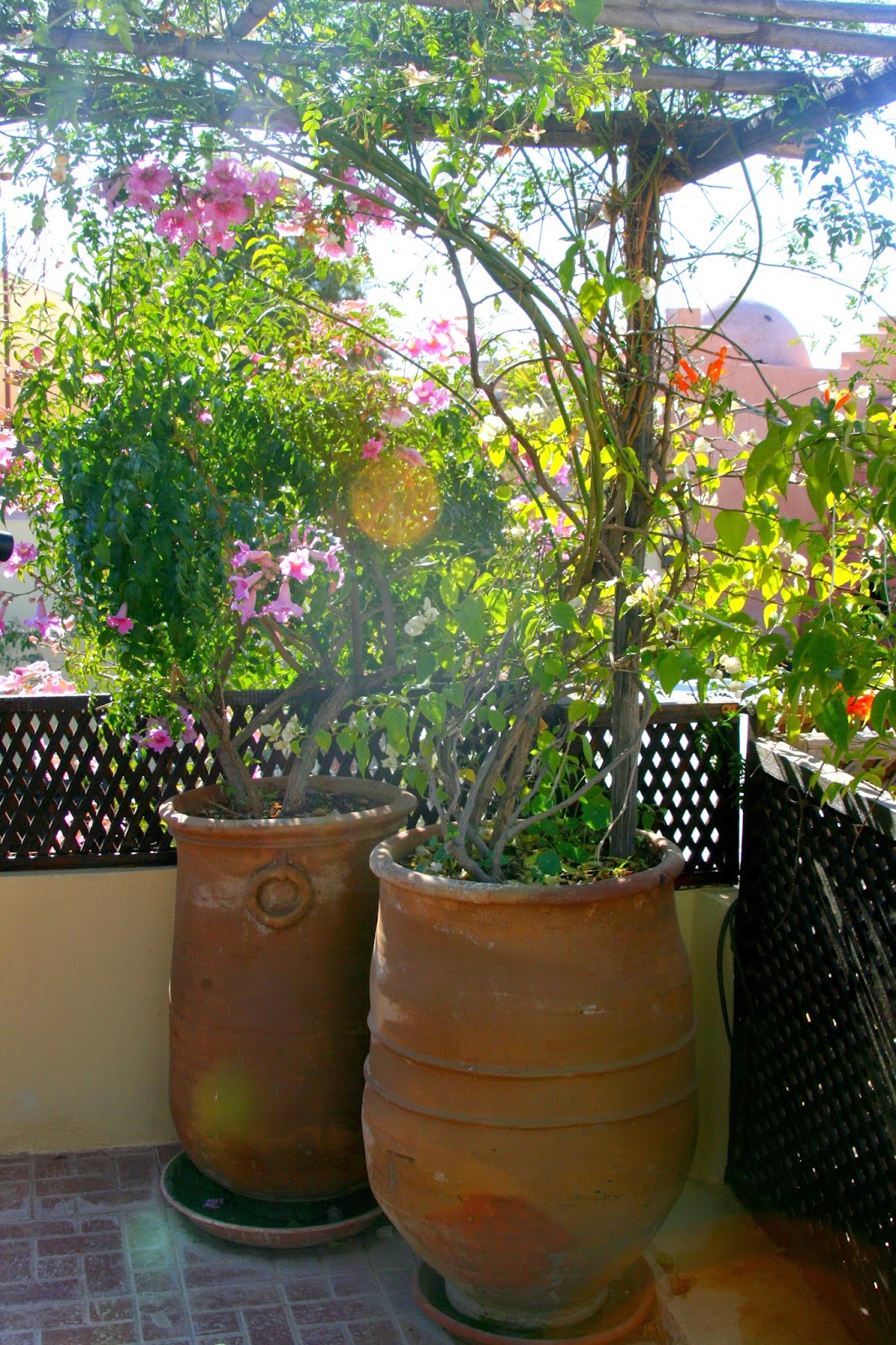 Theses are a few photos up on the roof - again - beautiful sitting areas and rooftop views.  We dined one night up here for dinner - and had breakfast also one morning.  The other mornings were very cold, so we opted to have breakfast downstairs. 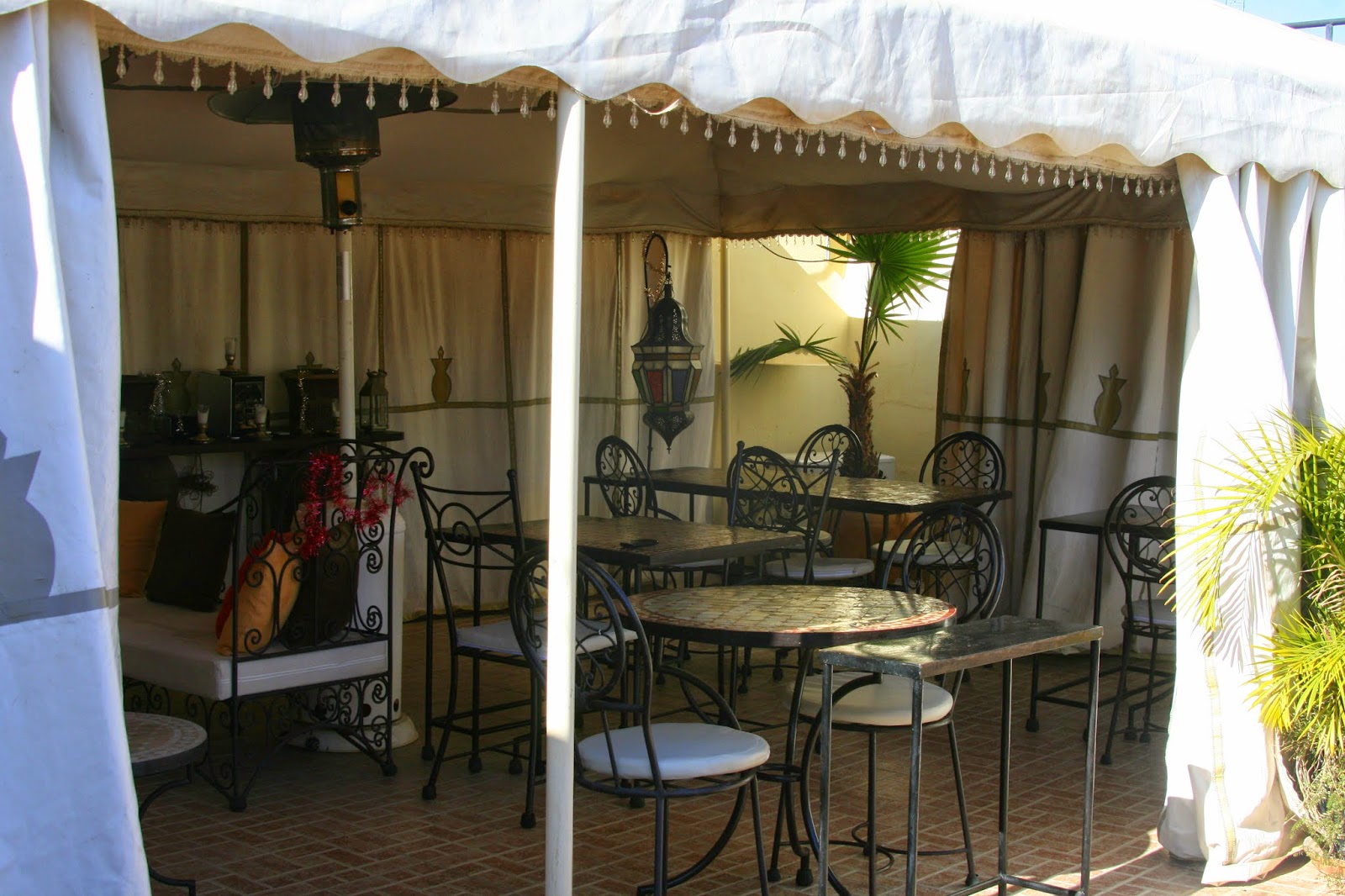 So this is just a taste of our first afternoon - I promise I will be writing more posts.  Too interesting not to share.  The first evening we did a Food tour - a sort of progressive dinner around the Medina and learned  a lot about the Moroccan culture and foods.  We also enjoyed a day outside of Marrekech touring the Ourika Valley and Berber villages with a guide.

So - again - Happy New Year 2015!  Looking forward to reading any comments you have or questions that I might be able to answer in upcoming posts.  Take care and have a great weekend!!!

Posted by American Mom in Bordeaux at 1:53 PM