Day 21 - Confinement in France - the uncertainly, the waiting & my beloved Bordeaux 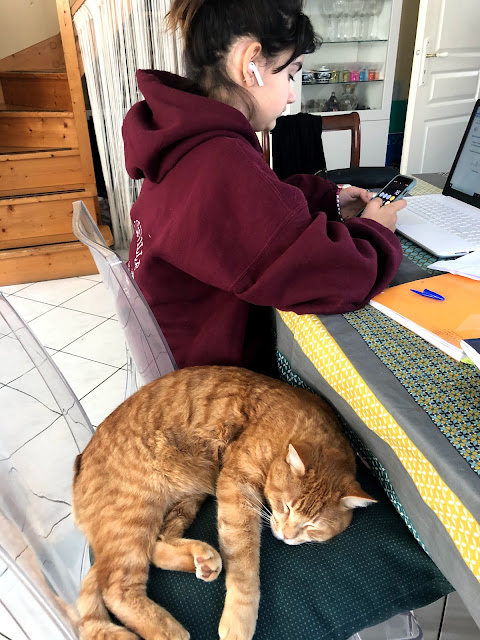 We have finished our 3rd week of official confinement in France.  Still waiting for the situation in France to improve healthwise with this virus.  Still too many deaths, too many people in Intensive care and still new cases each day.  I try not to worry too much, but this is the daily news.

Life last week the girls returned to my home and fell back into their routine of schoolwork.  We did add exercising to the mix.  By French confinement rules, we are allowed one hour a day to venture out for exercise.  The State stresses that this is for exercising not for just being out wandering.  So on Wednesday afternoon, the older girls headed off on a jog for an hour and my 12 year old & I went off on a brisk walk....well I walked briskly, she followed on her skateboard!  (Children have a bit more flexibility with the rules, they can go out with their parents on bikes, skateboards etc...)   As adults we can't ride our bikes except for either going to work (if approved) or to run the necessary errands. In any case, it felt really nice to venture out beyond our walls.  It felt so nice that I have begun a new routine of a power walk each day.  It does feel good.  But it is for exercising, not just to get out - it feels good to exercise & work out that underlying stress of this whole situation. 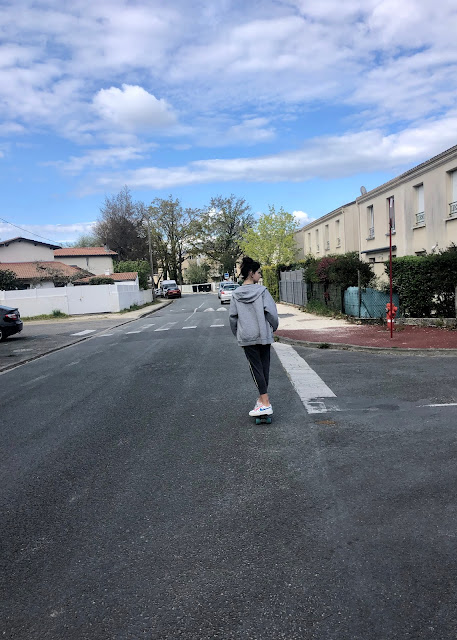 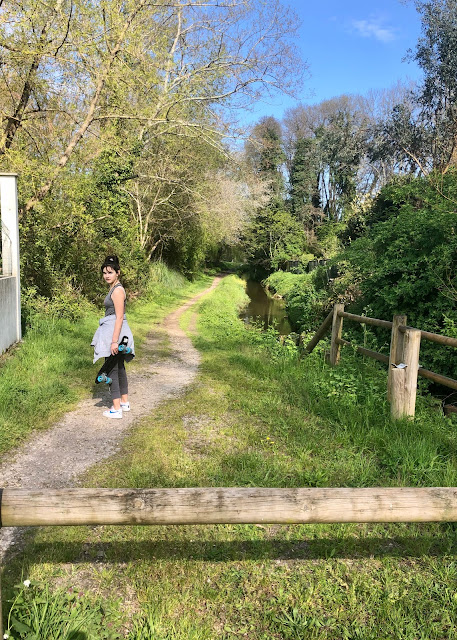 To be honest, it's still stressful even to go out.  I've realized that there is a feeling of safety to be home, staying at home.  We have control at home, everything is clean, no one is sick.  I'm a not a person who is fanatic about these things, but this virus is definitely something serious and it makes you think twice about how germs are transmitted.  It's important to keep things clean & stay healthy.  I do believe that exercising daily helps our immune systems and I believe that this was the true intent of the 1 hour a day allowance of exercising. 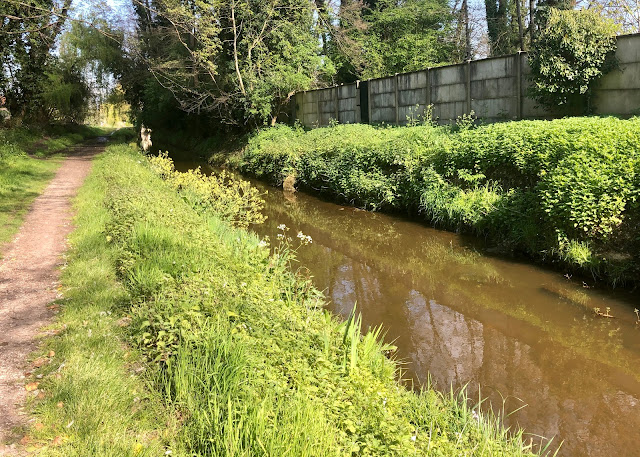 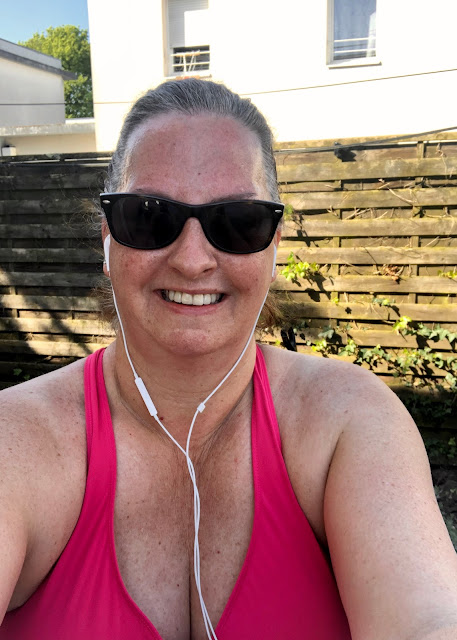 Each night we watch the news to see how everything is going.  We are somewhat lucky here in our part of France - we are one of the areas lesser hit - fewer cases in total for our region.  But the virus is still here none the less and still increasing.  We watch to see how many new cases, how many new deaths - both as a country and as a region.  We watch for the number of cases to lessen, the number of deaths each day to lessen..we wait & we hope.  It didn't help this last week that France was originally showing numbers of deaths in just the hospitals but not in the nursing homes & they finally added them all in and are now appropriately counting them both.  This means that our numbers took a bit jump all of a sudden.  It's important to understand how each country is counting their deaths.  I just learned this morning, that in the United Kingdom, they are just counting like France was doing before - confirmed cases of Covid-19 who pass away at the hospital.  But there seem to be other deaths, outside of the hospitals where Covid-19 was listed as the cause on their death certificates and these are not in their offical numbers.  This makes it harder to compare countries and situations.

Of course, I keep a close eye on the United States too.  So it's actually a bit of a double stress for me as I follow our life here in France, along with the mess in the United States.  I definitely have to limit my news information, it gets overwhelming too easily & too fast.

As of yesterday, as we started our 4th week in confinement - here in France, like elsewhere, there is the debate about everyone wearing masks in the general public.  At this point, it is not mandatory, it's seems to be highly recommended and this might change in the immediate future.  It's been reported that the city of Bordeaux has ordered reusable fabric masks for everyone that can be worn and cleaned for a duration of 30 days.  New details keep emerging but like many other areas, many people are making their own and using them when out and about.

In all of this sadness, sometimes it's necessary to laugh.  The following was a comic sent to me by friends.  It translate to:  Trump's advisors have advised him to wear a mask. But they were not precise enough. 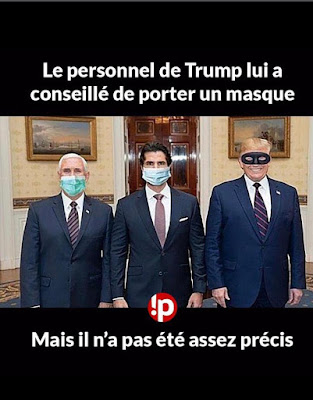 There is definitely the concern here that people are getting tired of being confined and are going out more.  Especially in Paris, where this last weekend, there were many photographs of people out and about "doing their shopping" or "exercising" - but many more than before.

I just read an article from here in Bordeaux about the stupid excuses that people gave our local police here in Bordeaux to justify their ventures out and about.  Like the woman who was wandering along with a pet carrier under her arm & told the police that she is allowed to walk her dog...a stuffed dog!!  Or the man who tells the police that his dog just ran off the leash...  For exercising, the woman who tells the police that she has the right to exercise her infant son in a stroller because isn't it the same as exercising her dog?  In Paris, it's worse, there are just more and more people venturing out.
You can see it's starting to get long for people...

In Paris, today they have started new controls that indicate that you do NOT have the right to exercise between 10am & 7pm.  All in an effort to get people to think twice and stay home.  Some cities have installed curfews that no one is to be out after certain hours.  We protect ourselves & we protect others.

They have just announced that President Macron will be speaking on Thursday evening.  Will he extend our confinement until the end of April? There is so much uncertainty, so much that is unknown....from my single perspective, I think the confinement will be extended as France has not started seeing a consistent decrease in the number of deaths or the number of cases admitted to the hospital.  We have good days and bad days.  There seems to be glimmers of hope from Italy and from Spain - but remember both countries have been locked down very strictly for the past few weeks..
So we will wait and see.


In the meantime,  as I have done before, I wanted to share a little corner of our paradise.  Here's a few photos of my beloved Bordeaux - the city that has gone very quiet over the past month.  I long to return to the keyside, to the center and enjoy it's charm.

Wishing everyone well and I hope you are staying safe.  Until next time....

Posted by American Mom in Bordeaux at 4:37 PM