French Cooking - American style...Learning from each other.. 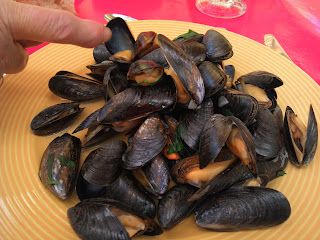 Learning from the French - well sort of....

I have to say I love French food - not necessarily the nouvelle cuisine of French cooking but the farm fresh, delicious recipes - seasoned just so and served over numerous courses.  My mother-in-law is an absolutely fabulous cook.  I have always loved visiting France - but to visit and spend 3 weeks eating her cooking - DIVINE!  Her style is a mix of traditional Perigourdine cooking with newer recipes that she has adapted over the years from their time in Reunion Island, French Guiana, Corsica and even up North in Paris and the Loire Valley.  She's inventive but traditional.   She will make traditional favorites along with trying new recipes from time to time from magazines. She favors simple sauces with farm fresh food.  She carefully picks her choices at her local market and now that they have been retired for 15 years and living in Le Bugue, Dordogne - she knows many of her vendors at the market.  I love watching her cook - she measures, stirs, tastes until she feels its perfect!  She will prefer to finish cooking or frying up the main dish between courses, leaving us to sit and chat for 15 minutes than to have it sit and be over cooked.  Simply put - she could have been a professional chef!  Here are a few beauties from this past week alone...


So I have always been inspired by my mother in law's cooking.  Over the years, each time I've visited France - I've always headed back to the States with several cooking magazines - along with new recipes from my mother in law to try.  Now some recipes were pretty hard to duplicate, as we just don't find the same ingredients in the States.  Magret du carnard (duck breast), gras du carnard (duck fat), gesiers du poulet or carnard (chicken and duck livers/insides) and of course creme fraiche just don't exist in the same way.  Still  I would "oh and ah" over the photos.  Even Fresh salads looked different in French magazines.  From such great inspiration, I have added new recipes to our menus over the years.  I know even in the States - lots of people look toward French cuisine and cookbooks for inspiration.  Somehow we all have this thought - the French know how to cook!  Ah, French food - delicious! 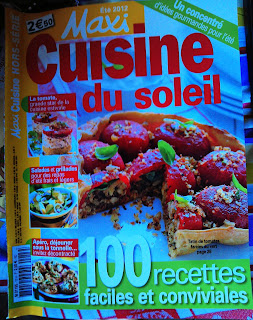 But I have had a laugh recently - Over the years, I have come to learn that Corn on the cob - as we know it in the States has never caught on in France.  To be honest, as my French in laws explained it to me many years ago (and also the family that I spent a summer with as an exchange student when I was 16) - Corn is grown for feeding animals.  It's not considered a staple food here - it's just not classy.  Now when we have had French friends visit the States in the summer - and (of course my in-laws) we would served them Corn on the cob or grilled corn on the cob (yummy!).  They did enjoy it - but aghast, - one could not serve it to guests in  France - "What would they think?".

So much to my surprise this Spring, I opened up one of my favorite French cooking magazines and viola -

Leave it to the French to put a twist on it - but there it was Corn on the Cobb - grilled and ready to be served!  Right in the middle of the magazine - with other recipes that are good to grill for a barbecue party.  Now I love the (a l'Americane) as it's served with a tomato sauce for dipping.  But come on, who puts ketchup on corn on the Cobb? So maybe the French are learning a few American tricks?

Just a bit of fun on a Sunday....Happy weekend!

Posted by American Mom in Bordeaux at 9:18 AM