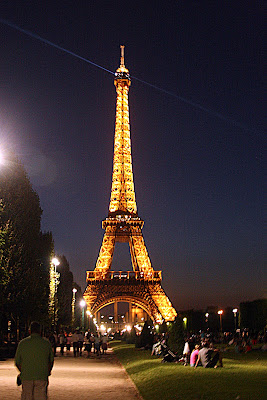 I just finished uploading all of our photos from Paris - as I was looking at them - I realized that the Eiffel Tower kept showing up - from the first night, on...pictures taken at night, viewing it from the tour bus, views from the Bateaux Mouches, the Seine, from the top of Printemps etc...A day did not go by when we didn't see some view of this landmark.  I suppose it was also destiny that we had a view of it from the front of our hotel.

I have to say - this made my girls extremely happy - when we were planning our trip to Paris - I asked my girls what they wanted to see - of course -Top of the list was The Eiffel Tower!  For them, they thought of  Paris and the Eiffel Tower just went with it.  So I guess to see it numerous times throughout our stay there was just what was suppose to happen.

A few facts...The Eiffel Tower was opened in 1889 - built for the World's Fair held in Paris that year and stands 324 meters tall.   It took 2,5 years to build.  It was constructed to show that iron was lighter and stronger than stone. Was initially considered a monstrosity when it was built as it towered above all the other buildings in Paris - There was talk about tearing it down as it didn't fit with rest of Paris's architectural style - but was saved as it became a telecommunication tower in 1909- and this sealed it's permanent place in Paris as a landmark.  Gustave Eiffel engraved the names of 72 architects, engineers, scientists and mathematicians of the time into the tower below the first level.  The tower is repainted every 7 years to protect it from corrosion.  On a clear day one can see about 37 miles out and around Paris. Source - Wikipedia

It was very interesting to see it from various perspectives and in different lighting - each time we saw it - I marveled at it's magnificence!

Below is our first night - the first sighting...and boy, it was amazing.  I unfortunately didn't get a photo of my girls as they took their first glance - we approached the tower from the Southwest and then as we rounded the corner at the end of the park - Let's just say - eyes were large - and their mouths were wide open.   Then we had to take photos of everyone standing in front....


One of the other fun things to see was the number of people picnicking in the park - sitting on their blankets and towels with their baguettes, wine and of course cheese!  This is France after all!  As it got darker - the tower looked brighter...and we just kept walking toward it. 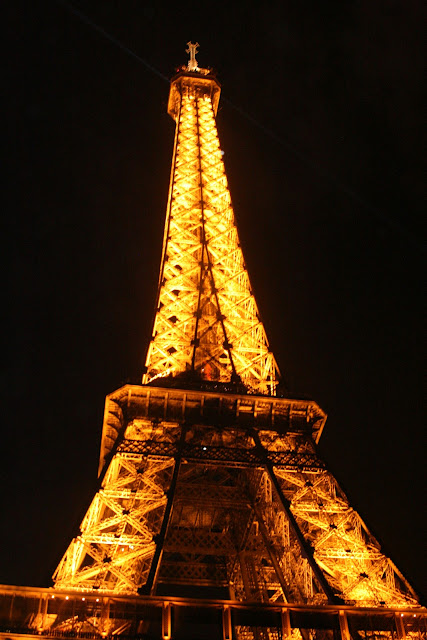 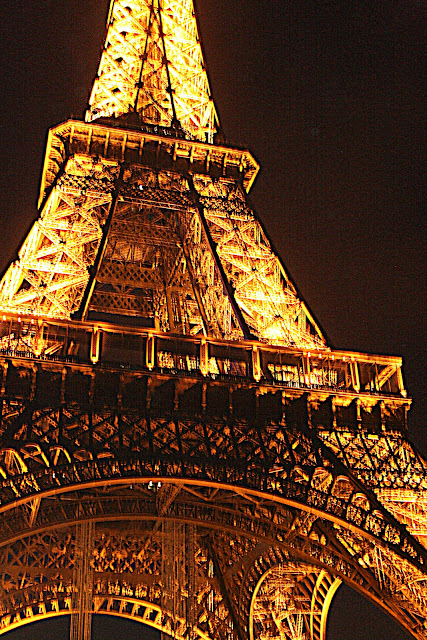 And then - as we were walking back to our hotel...for the first 8 minutes of each hour - The Eiffel Tower just sparkled and twinkled! 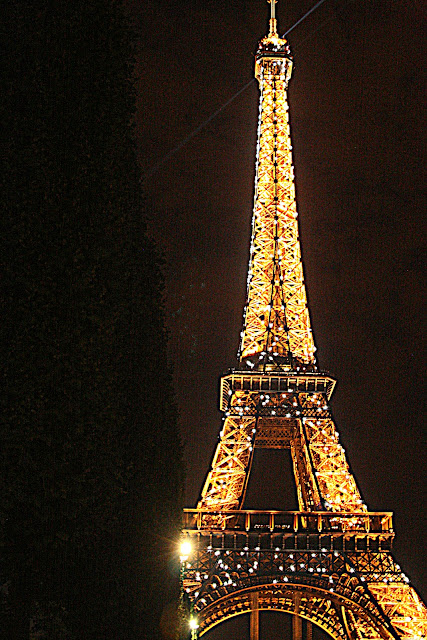 For a first impression - seeing it at night was definitely the way to go!  I don't think my girls (or myself ) will ever forget that first night!

But, there was plenty more views to come... 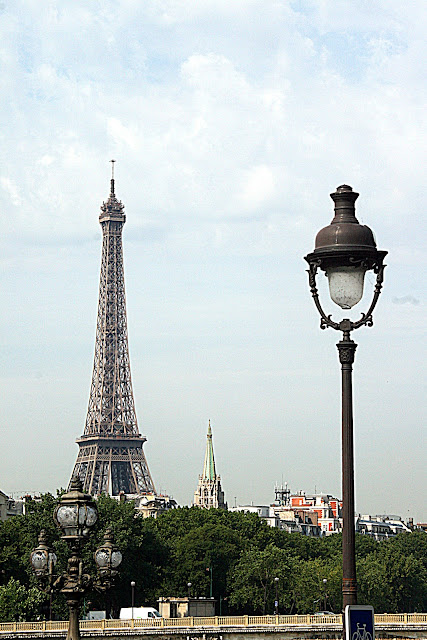 The bus made a loop around the Eiffel Tower - first approaching it from the other side of the Seine and then looping around the Tower and stopping to let people on or off.  Again, in the day light - it looks very different. 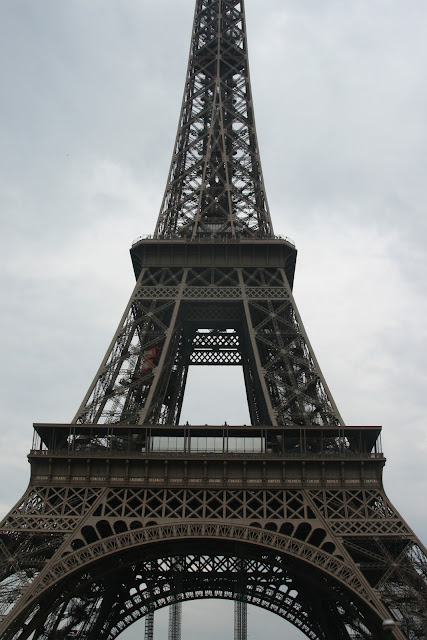 It's also fun to view the Eiffel Tower from different vantage points throughout the city.  The photo below is taken from the roof of the department store - Printemps.

And then - on the way to the Bateaux Mouches - for our twilight cruise....The lighting and the sunset super!

But one of my favorite photos - is as we were walking back to our hotel - after the boat ride.  It was just getting dark and the moon was in the sky...Amazing -photo. 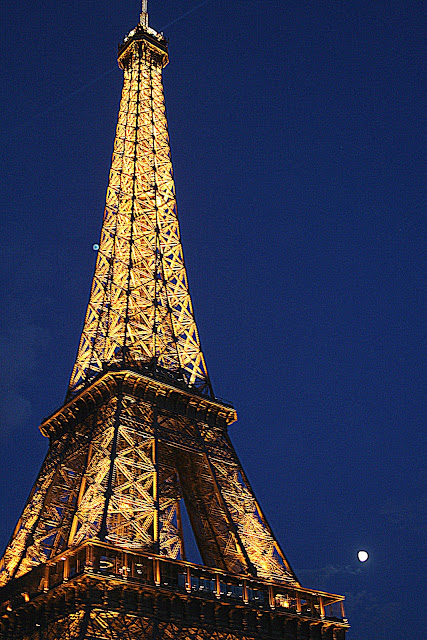 So for our last day - we headed off to Jardin Trocadero - the other side of the river - and again..classic views of the Eiffel Tower.

And on the steps of the building...people were ballroom dancing...how romantic!...I managed to sneak this shot before too many other onlookers gathered around...10 minutes later - there was a huge crowd watching. 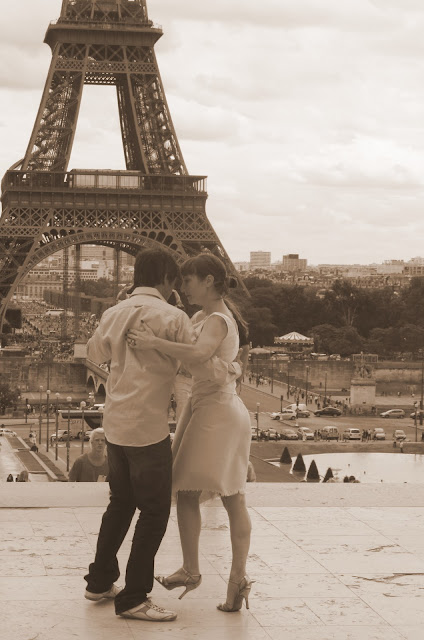 And of course we walked down to the Seine for a little stroll - saw the Bateaux Mouches on it's venture down the river. 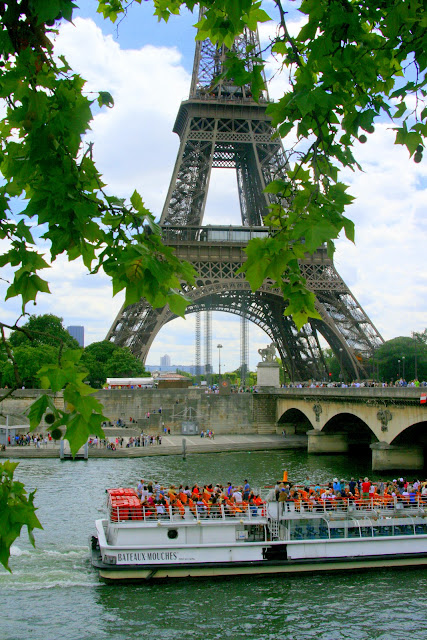 My eldest daughter just loved starring at the tower...I'm not sure how many times she said - "I can't believe I'm here!". 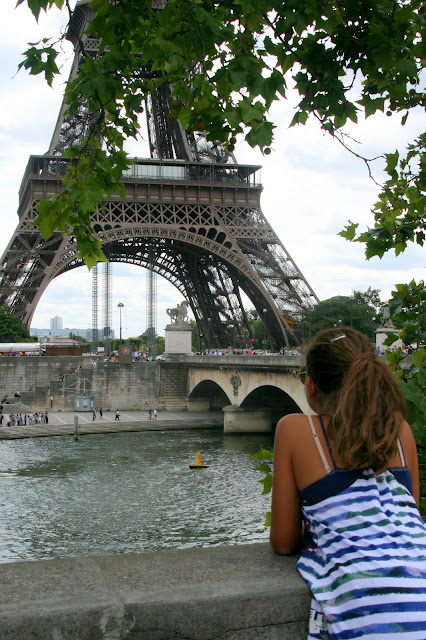 And finally at the carousel at Jardin Trocadero - one could spot the landmark painted right on top. 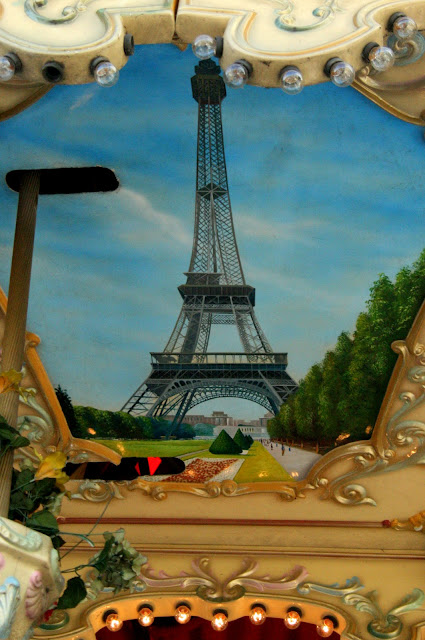 And how fun is this to ride the carousel with this view..which of course my girls did. 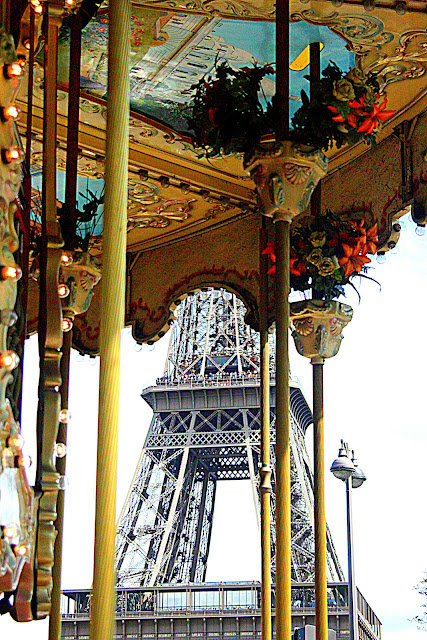 Finally our 3 days in Paris have ended - and we head off to the Metro and back to Gare Montparnasse to get on our TGV and head back to Bordeaux.  We will definitely have some fond memories of La Tour Eiffel!

Posted by American Mom in Bordeaux at 4:38 PM