How We Celebrate in France

There's a saying, when in Rome do what the Roman's do....and for the most part we love embracing the French way of life.  But there are certain American traditions that I will always find a way to celebrate - Halloween is one of them! This is technically our 3rd Halloween in this country (If you want to read about last year's fete - click Here ) and I have to say each year has gotten better.  Last year we attended a family Halloween party with our expat group and went to another one at an American friend's house on Halloween day.

This year we ramped it up a bit more with my eldest daughter hosting a soiree for friends of hers a few days before Halloween.  This gave us a great excuse to really decorate and get into the mood!  It was definitely fun having about 20 boys & girls over for a costume party.  For the French, Halloween is new - they are well aware that the Americans really celebrate this holiday but they are unclear exactly what is done.  It was great fun to introduce them to a little American culture!

I have come to learn that over the years, the French have tried to embrace the concept of Halloween - kids dressing up and trick or treating but it's been an up and down effort. This year, I noticed that the grocery stores were trying to sell more candy and encouraging kids who to go knock on doors.  On Halloween day, I was running last minute errands, and all the employees in one of the grocery stores were all dressed up.  They were also handing out treat bags in the candy aisle when you bought a certain kind of candy.

Additionally, when I went into our local party/costume store to pick up parts of the girl's costumes, I was astonished with how crowded the costume section was.  It seemed to me that people in France were celebrating this holiday a bit more than before.

Additionally, to my astonishment, all of my girls were invited to go trick or treating.  Yes, you did read that right - Trick or Treating in France.  My girls were beyond excited....it was going to be closer to the American tradition than they had experienced in previous years. My oldest daughter teamed up with a group of friends and went around their area.  Meanwhile, my younger girls and myself were invited to scurry about in our local town.

Now, I had asked my French friend, how is worked here - did people really have candy ready?  Were they prepared for this?  She explained that - yes, not everyone will have candy.  One does have to pick and choose houses...but often families with younger kids are more aware of this "newer" concept.  She also explained that sometimes people just give cookies, sometimes a few coins to go buy some candy or even apologize for not having anything. It's a training, each year might get better as people know what to expect.  So I explained to my girls what might happen, that the trick or treating concept is truly new here.

I think the other thing that helped a bit here was that Halloween fell during the kid's 2-week Toussaint school break.  This made it easier for parties and even trick or treating. It also meant we essentially celebrated Halloween for a week!!  Nothing like really celebrating an American Holiday!!

First up was my oldest daugther's party - not too many photos here - but I loved this party as most all the kids came in costumes!  It's always tricky to host a party for 12 year old - a little old for games, but at the same time needed some kind of entertainment.  Music & food is what worked best here and the fact that they could run around outside too.  In France also, I find more kids are comfortable dancing unlike this age in the States. Basically, they all hung out dancing, talking and playing a bit of tag and soccer in the yard!

I have to admit it was fun getting the house ready for the party - we haven't done that in years!!  Lots of spider webs - all over!  We also hung spider webs out by our gate.  Most of the parents I talked to were touched that we hosted a Halloween party and shared our tradition with their children.

On the day of Halloween, the girls all dressed up - do note a change of costume for my oldest...ladybug to zombie cheerleader. (Teenage girls...you can never wear the same thing twice - ha, ha!).

My oldest went off with her friends to go trick or treating and then ending up at another friends house for the later evening.  I took my younger girls out with our friends.  This was an adventure!!  My friend had hand picked some houses and it was fun to see different reactions.    The kids even got into the ringing the bells - and even went to a few houses that we were not sure what would happen - but it made it fun anyhow!  Interesting enough, we were not the only group meandering the streets.  We saw at least 3 other small groups of kids & parents ringing bells.

One of the big differences for trick or treating in France is that French houses are located behind locked gates.  One has to ring the bell and wait a while before people come out.  Most people were pleasantly surprised and brought candy out as they came to greet the kids - others came out and had to go back into the house to find something and of course there were a few who apologized for not having anything. (Maybe next year....)

Some people were also dressed in the holiday spirit - The witch below is handing out the candy.
All the kids really got into the spirit!  So how does "Trick or Treat" translate in French - Well - our kids were saying - "Des bonbons ou un sort" - This means - Candy or a spell - I'd say that was pretty close.  The teenagers apparently according to my older daughter varied the saying with "Des bonbons ou la mort" - Candy or death....well, they are teenagers of course!  (Another note here according to my 12 year old - her friends really associate Halloween with spooky - scary, ghoulish costumes)

The day after Halloween here is All Saint's Day - it is a National Holiday.  A day, according to Catholicism, to remember & honor all the relatives who have passed away. Since everything is closed on that day, it seemed like the perfect afternoon & evening for an expat family Halloween party.  So off we headed for some pumpkin carving, playing and even more trick or treating!!

I loved that most of the adults got dressed up too!! 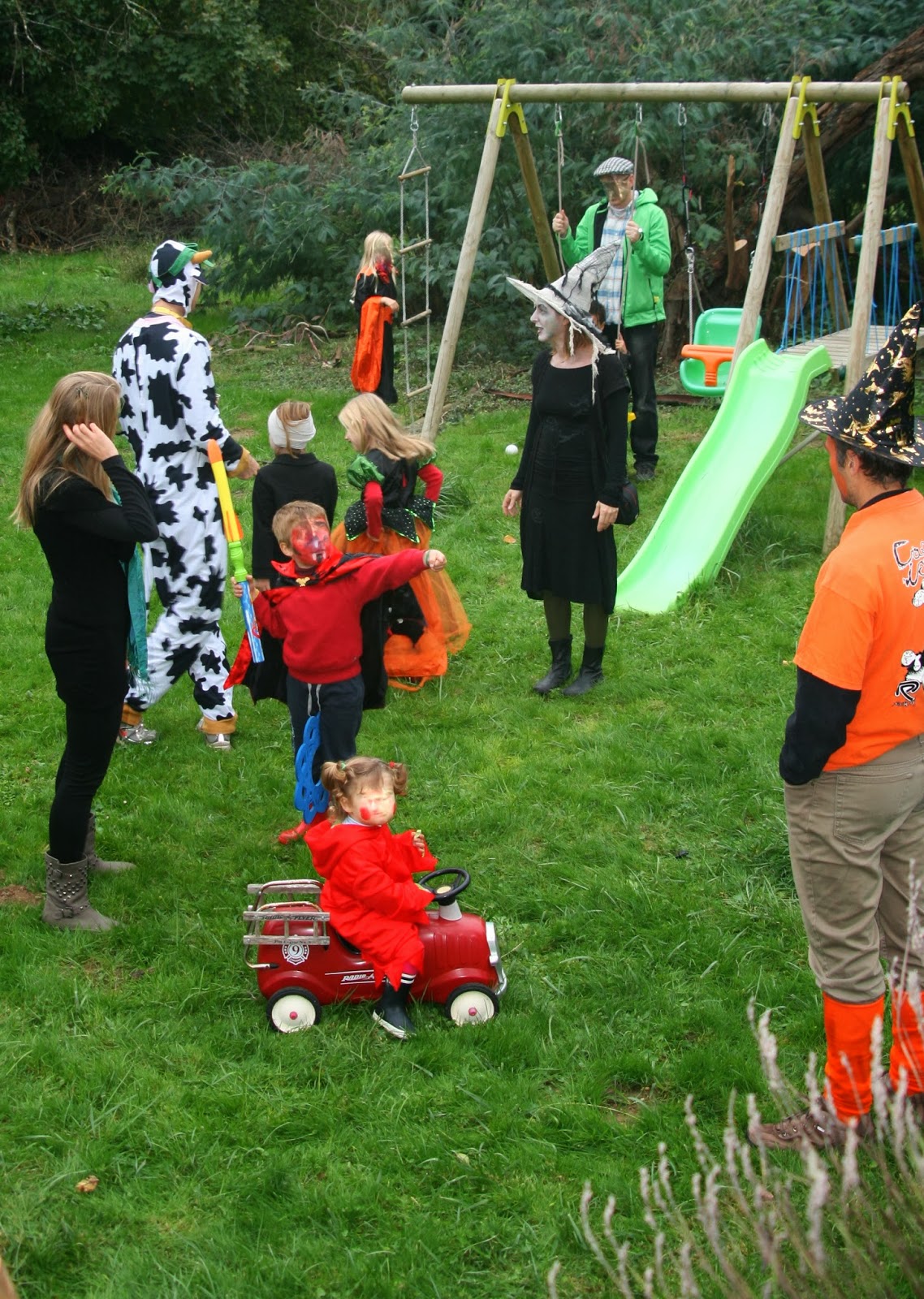 After all the pumpkins were carved, the guys headed off to set up trick or treating.  It was wonderful as the party was held at the Bordeaux Observatory and the kids got to do a little trick or treating next to each dome and building.  Very cool and fun for all! 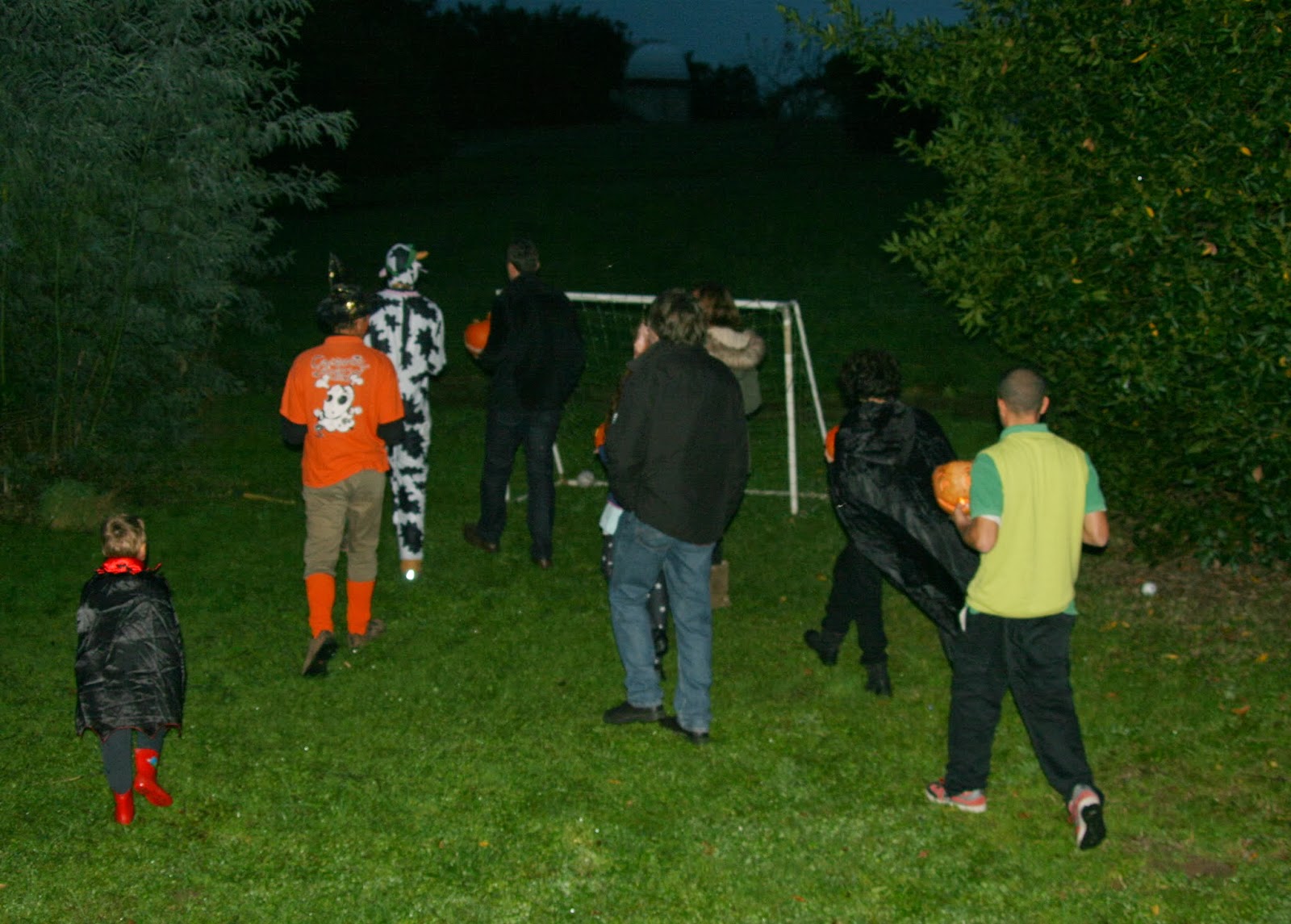 All and all, I think this Halloween was one to remember!!  Maybe, because we are expats we take advantage of any opportunity we can to celebrate and enjoy the holiday - a holiday that is so much a part of our American Culture - but it was also fun to see this area start to embrace the Halloween festivities a little. It's also nice that families and friends here appreciate learning about different cultures.  It will be interesting to what happens next year.  Happy Halloween to all - and for those of you who celebrated - I hope it was super fun! 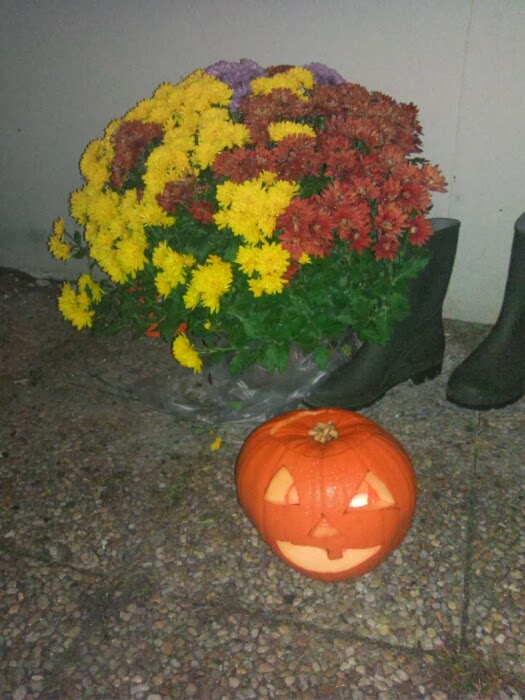 Posted by American Mom in Bordeaux at 1:02 PM