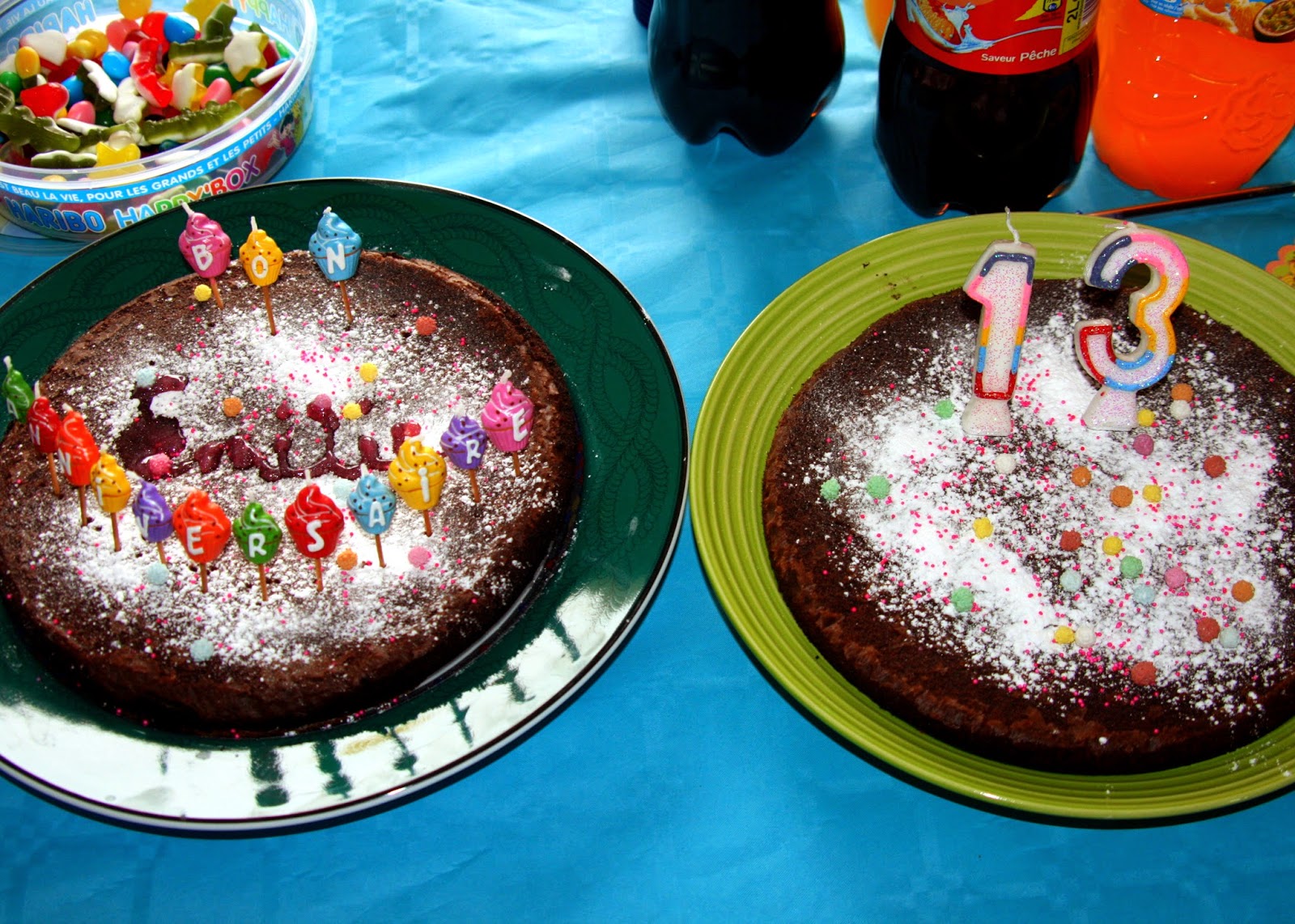 The blog has been a bit quiet for the past week or so as the end of January is always a busy time for my family.  My two oldest girls have birthdays on the 25th & the 30th - so it seems after we re-organize from the holidays, I go right into party planning mode for these girls.  I have to say, each year it seems a little easier - and less work.  Since living in France, my girls have opted for parties at home - with various crafts, games, themes etc.  My oldest turned 13 this year - Wow - a teenager - Where has the time gone?

She enjoyed an afternoon with nine of her French girlfriends and then a few of them spent the night.  Planning her party this year, was a lot of fun, as together we discussed what she had in mind. She decided she wanted to write the invitations, herself and went shopping with me to pick out her party goods/favors. The trickiest part of her party was what to do with 10 twelve/thirteen year old girls?  They are too old for a lot of party games, they love to chat, & dance - but the party was going to be 4 hours long - they needed something to do.  We explored crafts or other games -but also whatever we decided had to be mostly inside - in case it rained (which it has a tendency to do here in January).  My daughter thought a scavenger hunt with teams and clues was a best idea. To my amazement (at the suggestion of one of her friends) - she told me that she wanted to do the hunt in English - so it would be challenging for her friends.  This idea, I loved - what a fun way to get the moving around, have some fun and it would take more time for them to figure out clues!  Not to mention a way to blend both the French & English languages!  Truly multi-cultural! My daughter had a good sense of how much English they knew and we kept the clues (riddles) fairly simple in language. 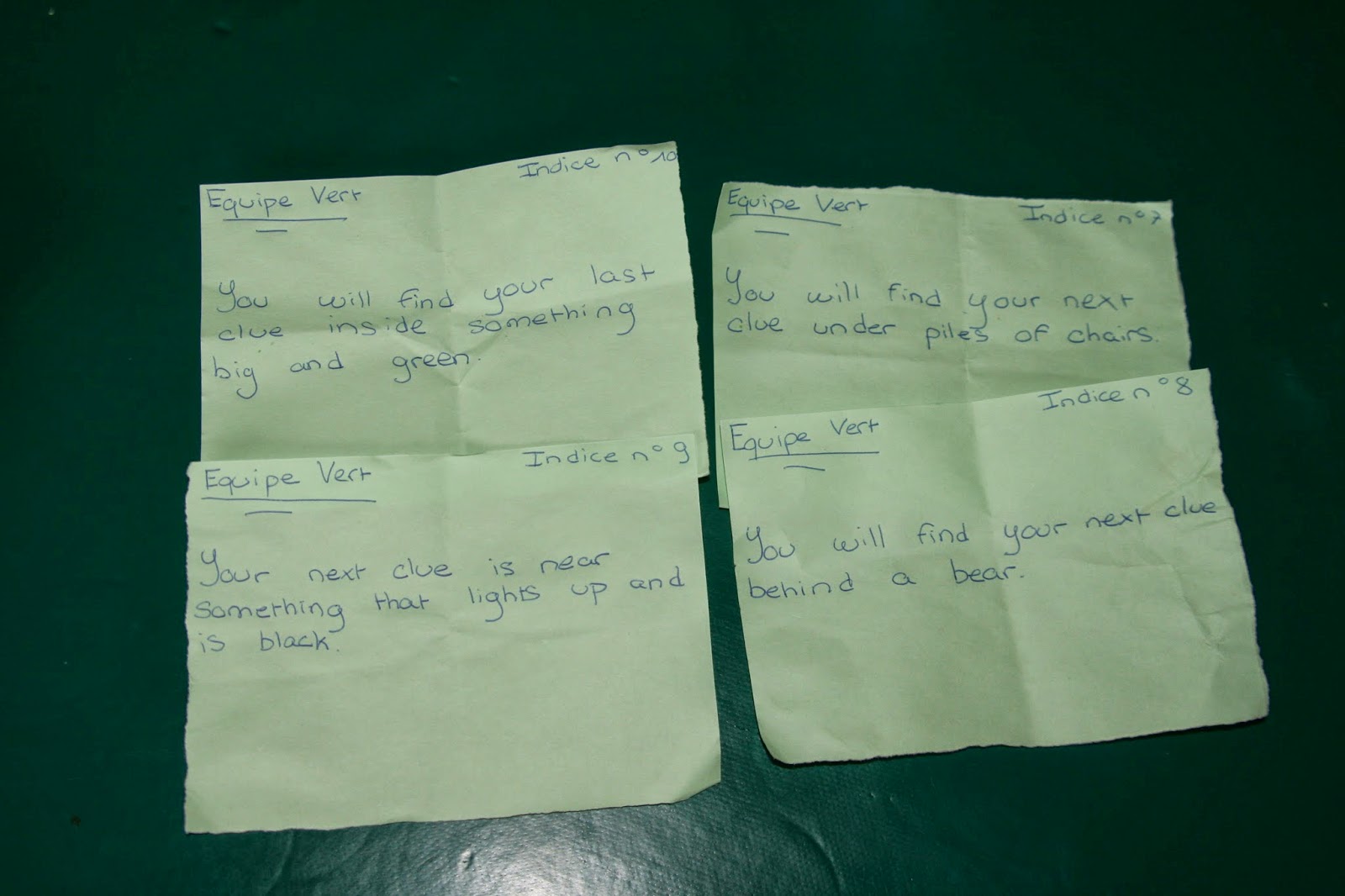 Together we came up with different hiding spots for clues.  She created 3 teams and color coded the clues for each team. She wrote out all the clues herself. She didn't play but we served as translators. She did tell each team that the first phrase on each clue read "Your next clue is" meant "L'indice prochaine est..." - the rest was up to them to figure out.  They could ask for help translating  ONE other word on the clue. 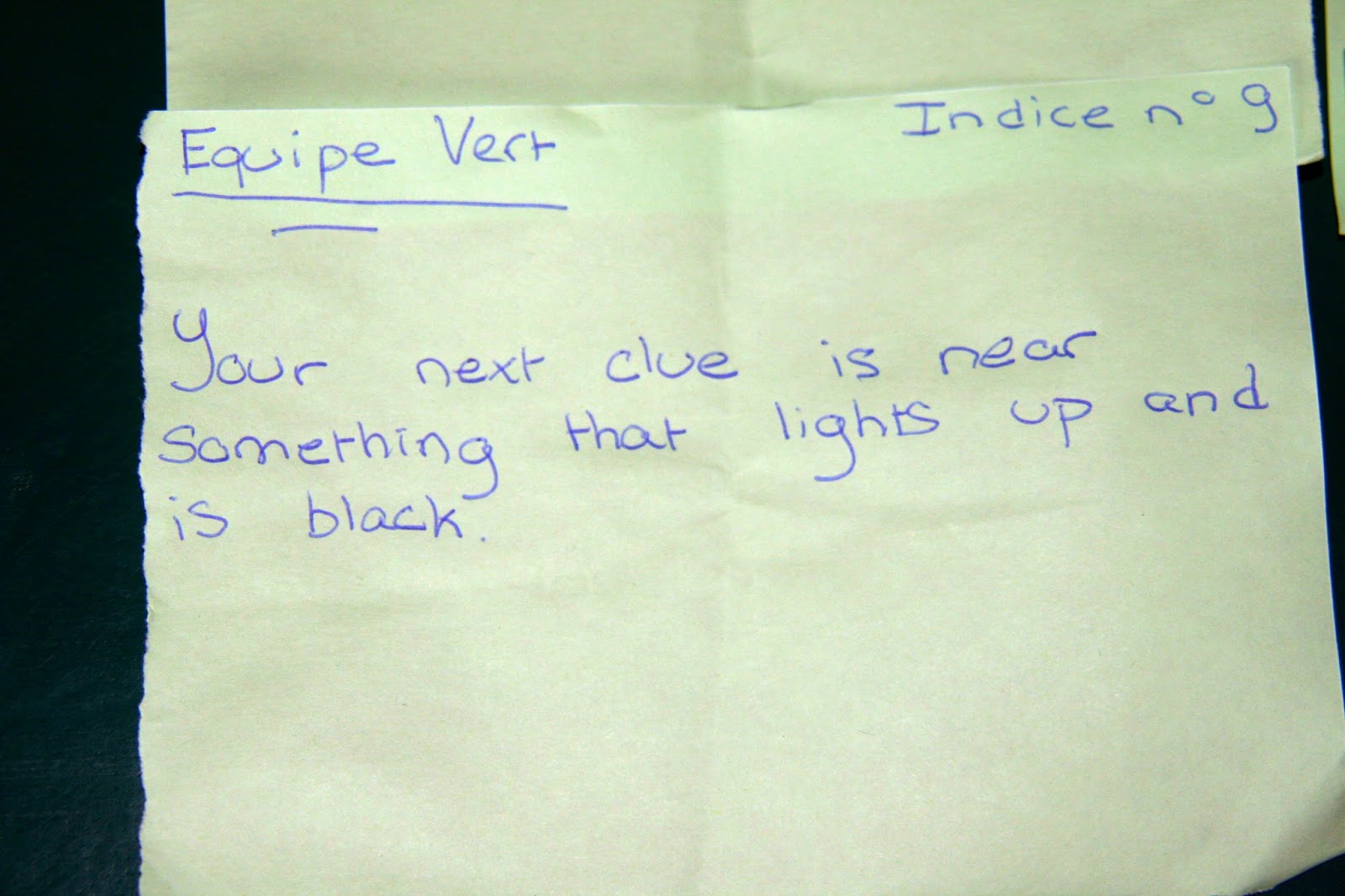 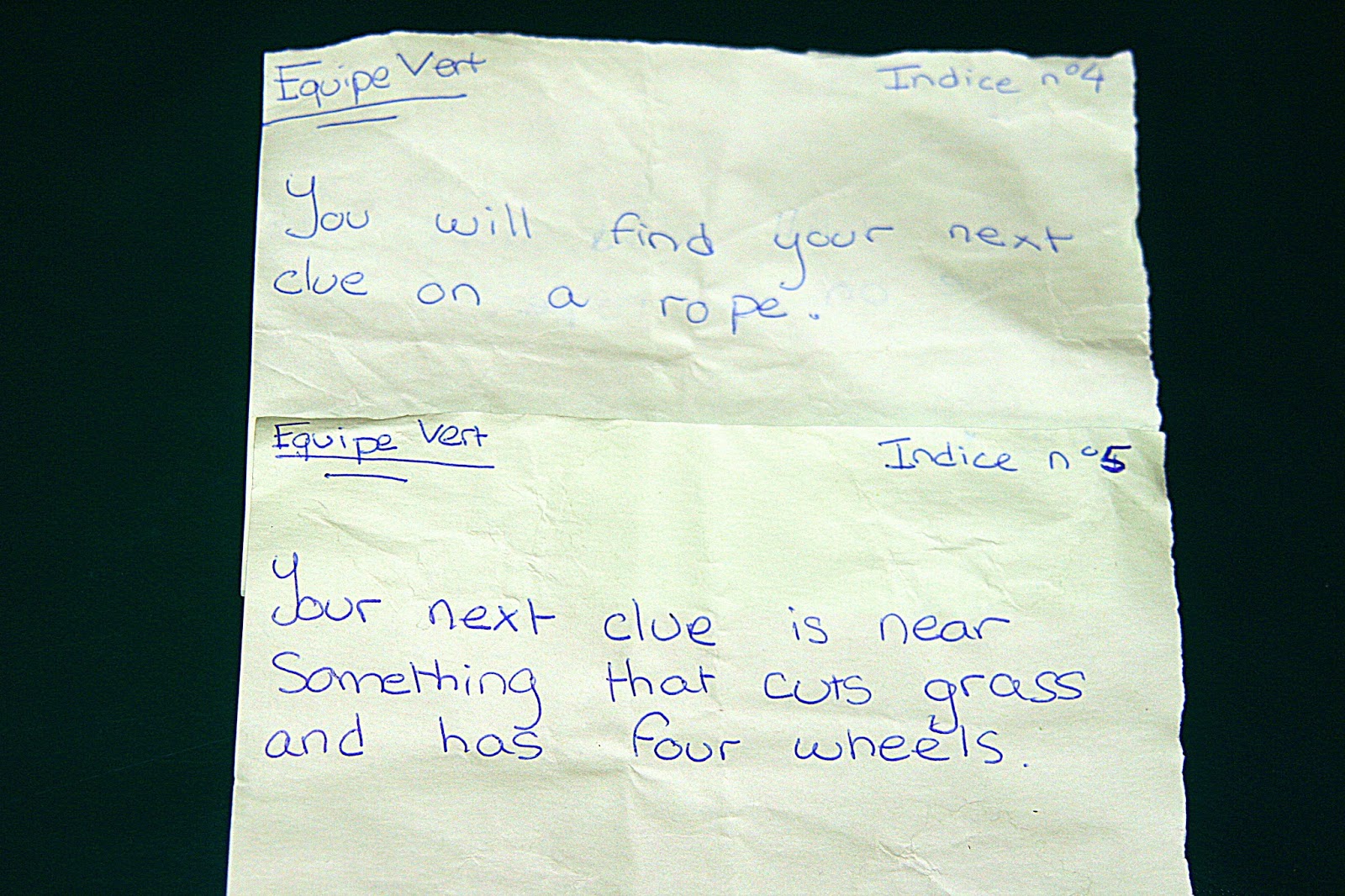 I was definitely impressed with her skills in keeping things simple, but at the same time not giving away the place, outright.  When her friends were told that the game was in English - they smiled & laughed & went with it. They had tons of fun - running around the house - inside and outside.  (We did tell them that the clues were visible and that they were located in the living room/dining room or hallway of the house or outside around the house.) 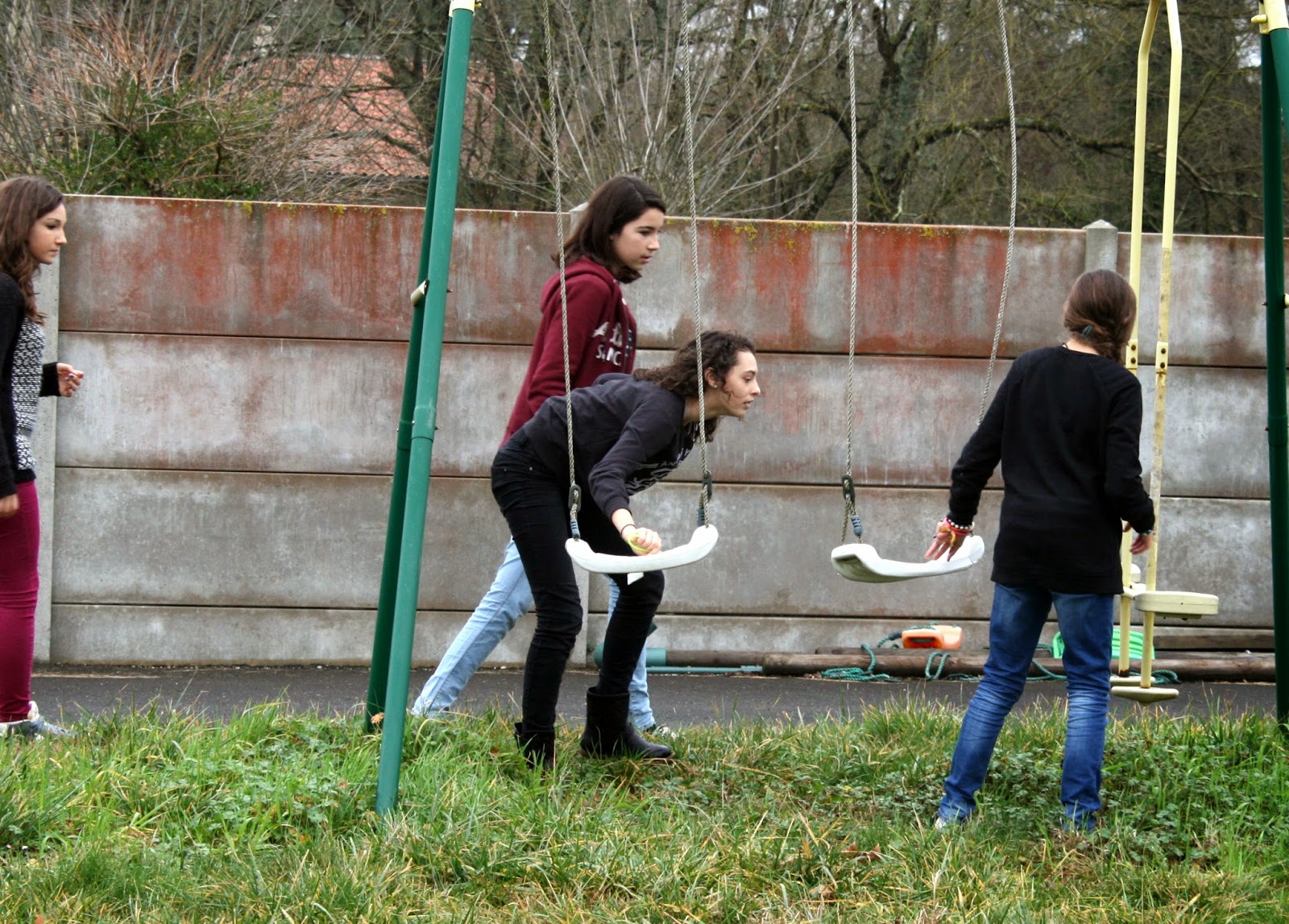 All the teams were led to the same last clue - which was for the winning team!  The team then exchanged the clue for the prize box.

A fun part here was that the girls enjoyed this game so much that they all finished finding their clues.  Lots of giggles, and perplexed looks at times - but it was definitely a success. 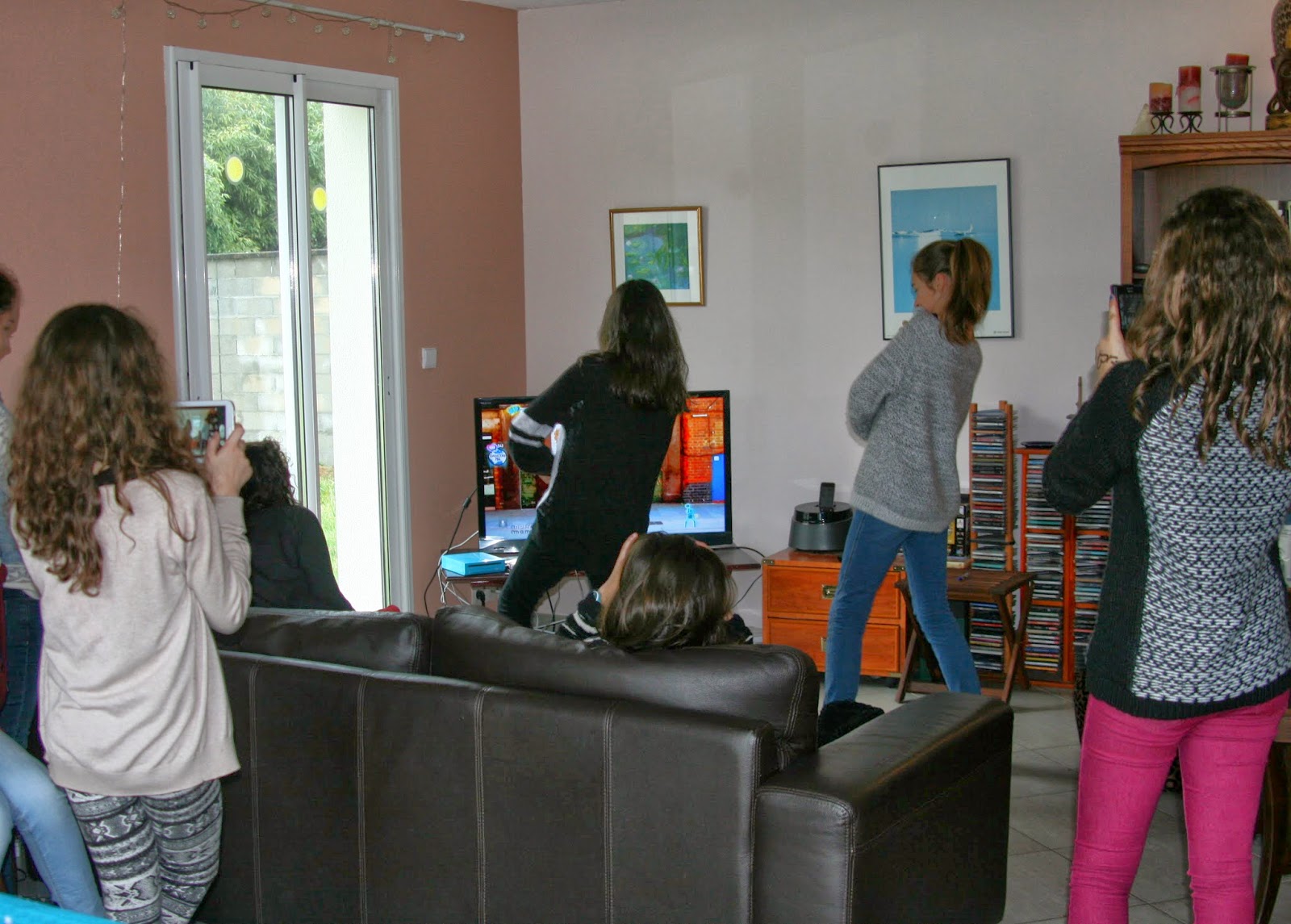 So what else do 12/13 year old girls do at a party - they dance, they talk - they video each other and take selfies on their phones/i-touches.  Lots of smiles and fun!!


We celebrated with 2 simple cakes - Fondant Chocolate - (basically a very moist chocolate cake that is extra soft/gooey on the inside).  Most French children do not care for extra sugary frosting so - I made both cakes and just sprinkled powdered sugar on top.  Very easy and very delicious!! 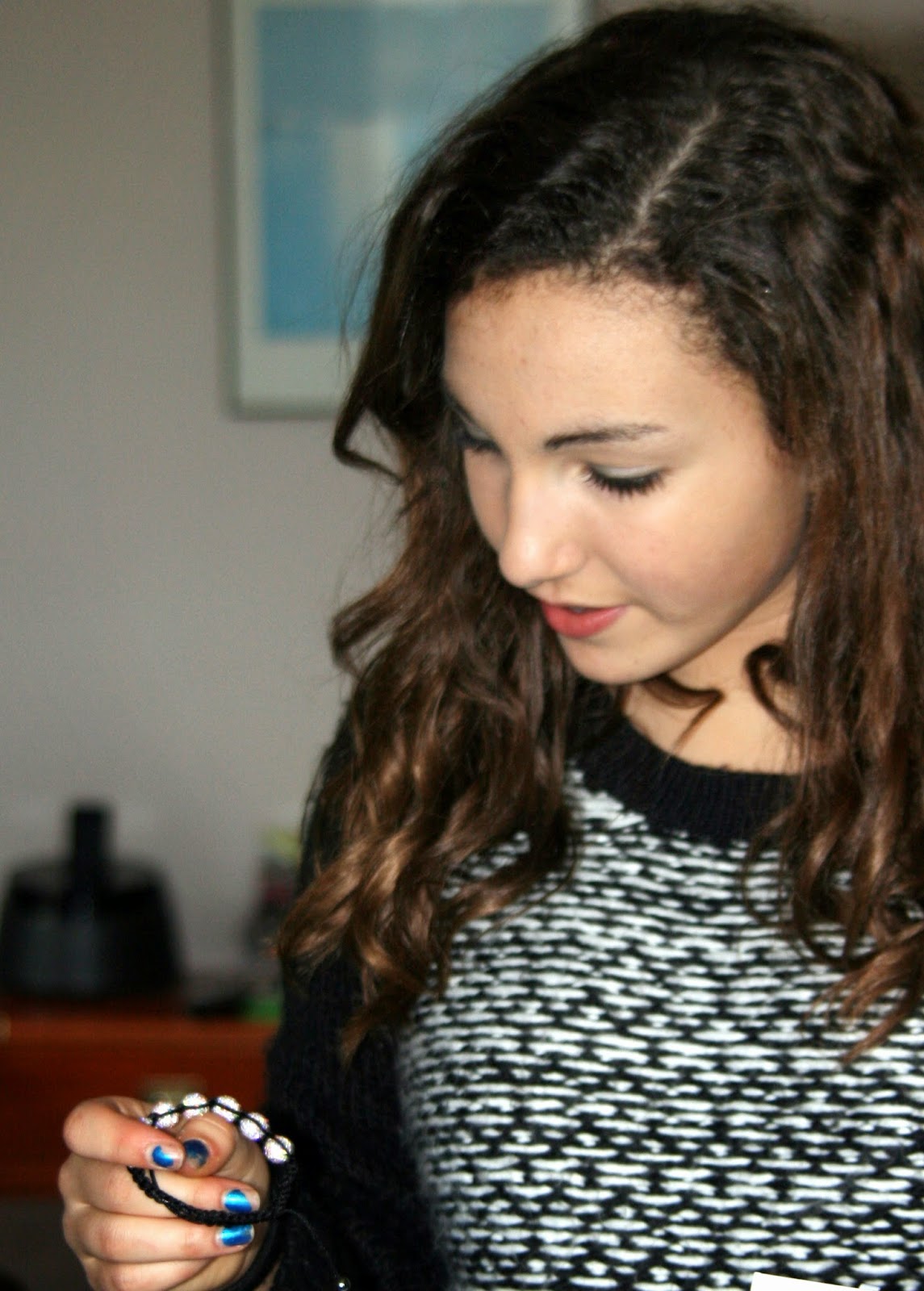 After cake, she enjoyed opening her gifts - which consisted of a lot of  bracelets, jewelry and scarves- all things for a fashionable teenage girl! 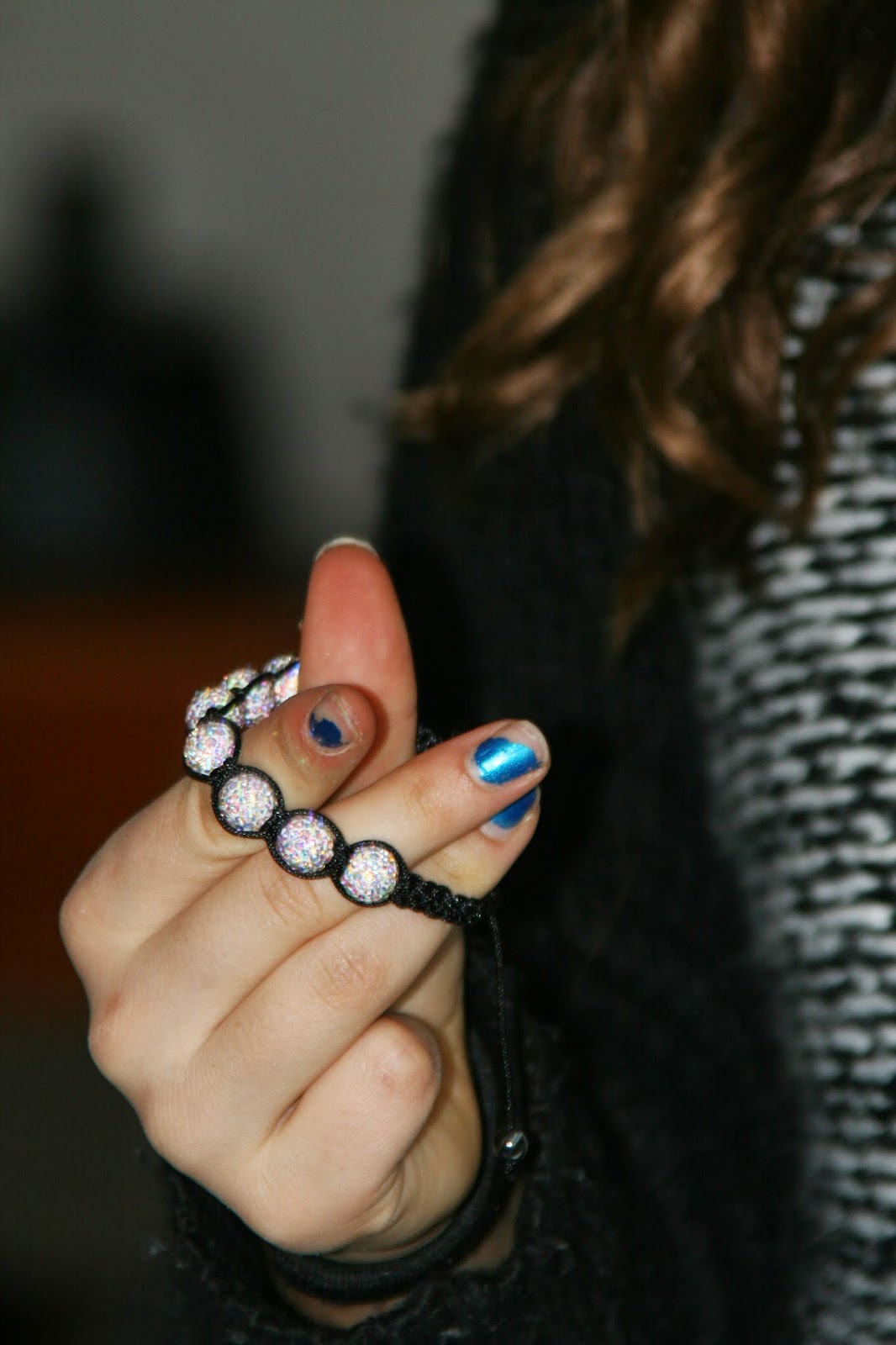 Another fun gift was a necklace with skulls one it.  The Skull designs are a big part of fashion here in France right now.  Not my favorite symbol - but when done in moderation - I've gotten use to this new trend. 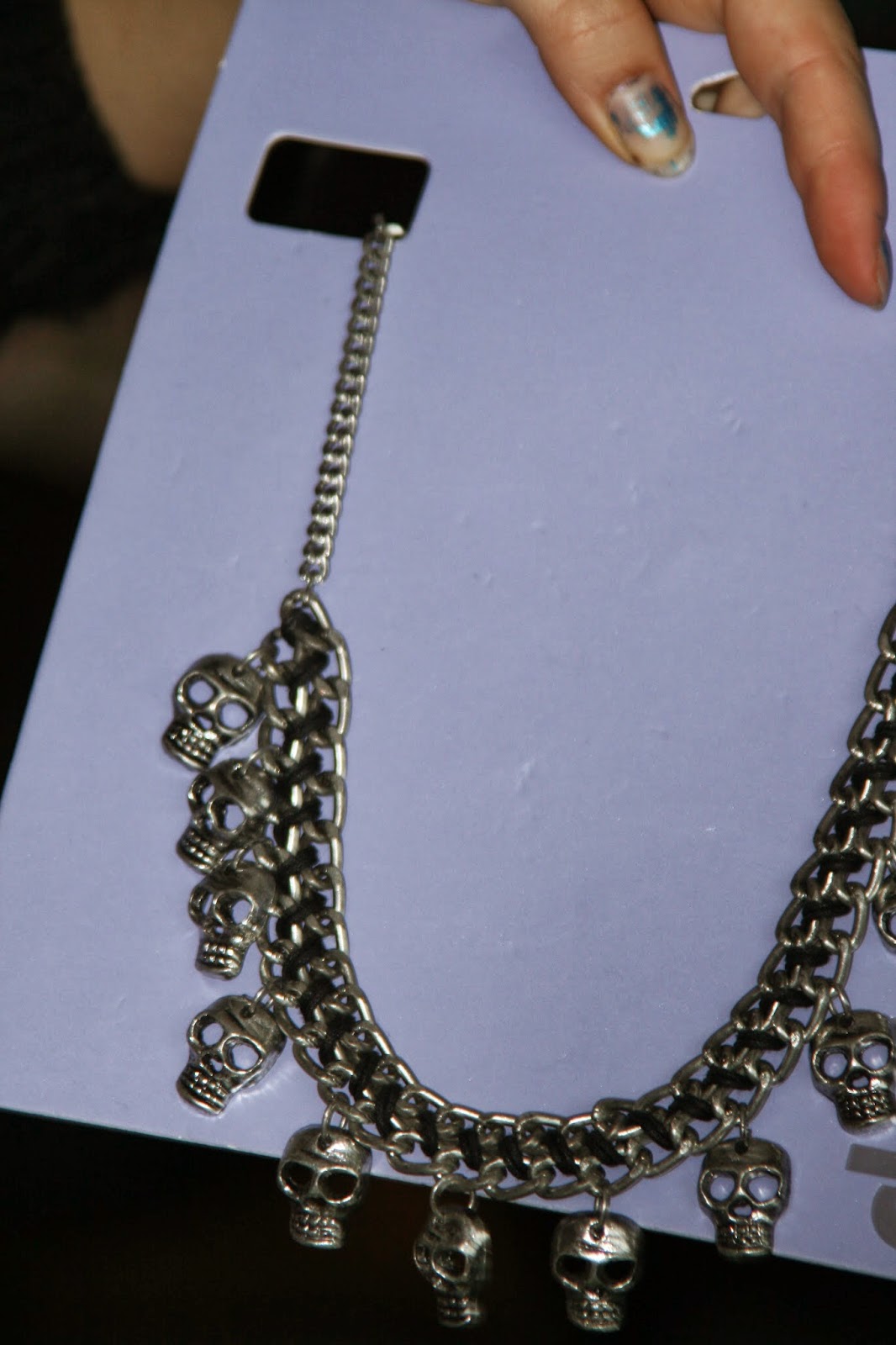 Speaking of French fashion for teenagers - I was amused by all their shoes as they kept taking them on/off during the scavenger hunt.  Here's the fashionable assortment of Vans, Nike's, and short leather boots. 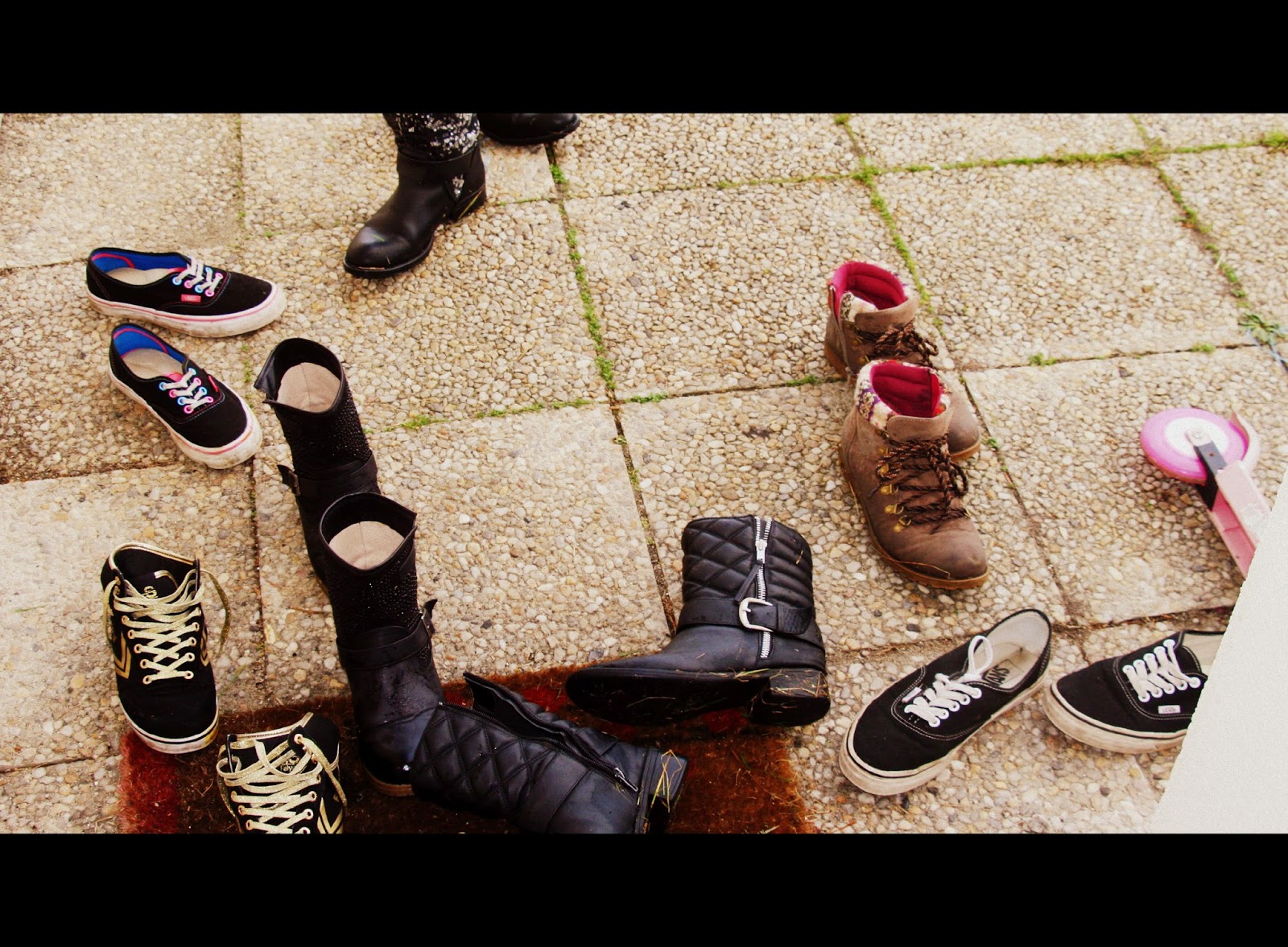 This party was a definite success and I would recommend a scavenger hunt for anyone planning a party for teenagers.  (bonus if you can use a foreign language - or foreign to them!).

Will be sharing another birthday post shortly - showing a fun craft for kids.  Happy February!

Posted by American Mom in Bordeaux at 11:08 AM