We just returned from a week on Ile de Re, a beautiful island located just off the West Coast of France near La Rochelle.  I had heard a lot of great things about this island and I was anxious to see it for myself.  I have to say it is one of the most beautiful islands that I have ever seen.  Peaceful, white, serene and with life there being about bike riding, sea activities and relaxing on the beaches. The island has a Greek look to me with the white buildings and colorful accents of blues and greens on doors and shutters. Mix in seeing the beautiful villages scattered throughout the island and it was a wonderful vacation! 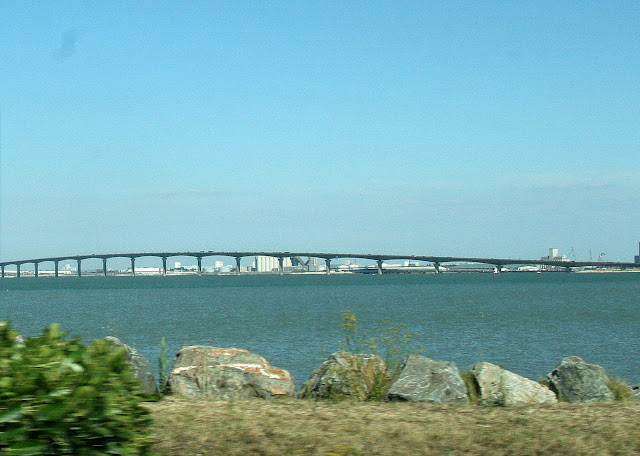 Access to this island is over a toll bridge that connects it to mainland France.  It's a hefty toll of 16 euros/per car during high season, so we were happy to stay on the island the whole week we were there.  It's the second longest bridge in France and was inaugurated in 1988.  Prior to that, the only access to the island was by ferry.  We chose to rent a Mobile Home in a campground located in Loix - a small town in the center of Ile de Re - situated out on the Northern Peninsula.  This location is a bit more isolated than other towns on the island, but for us it worked out perfectly.  We brought our bike with us, noting that it's easier to get around on this island on bicycle than in a car.  Since moving to France, my kids have ridden their bikes more and more.  I was excited to have some longer jaunts for them to experience. 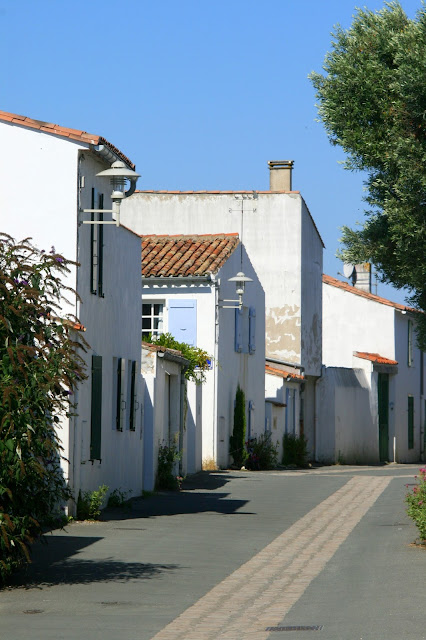 Loix is a quaint village with beautiful white buildings with colorful shutters located throughout.  I fell in love with the pristine white houses and adjoining walls - it just gave this island such a beautiful relaxing appeal. The village itself held a morning market each day and it was an easy 8 minute bike ride from our campground.  Bike paths are located throughout the island connecting the villages and also allowing cyclists to explore the towns.  When one gets to the very center of Loix, where the market was held, it was pedestrian only - so one locks up their bike and wanders through the market.  Love the summer French market scene here, especially with the white buildings surrounding it. 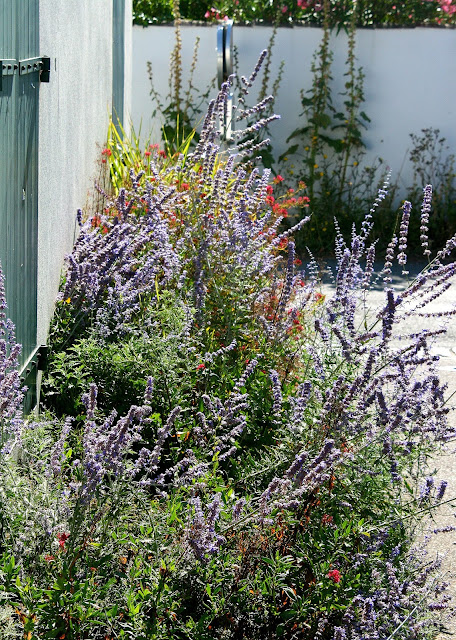 At the market, one finds a cafe located in the center of the town, where sipping a morning coffee and people watching is a sport of its own.  There were various vendors all selling many different kinds of products - food, clothing, pottery - a little bit of everything.  We went several mornings and there was always something new to see. There were even street musicians entertaining the crowds in the morning.  Located on the edges of the market were the local produce, butcher and fish markets which had more permanent stores and where you always found lines of people waiting to buy the freshest products. 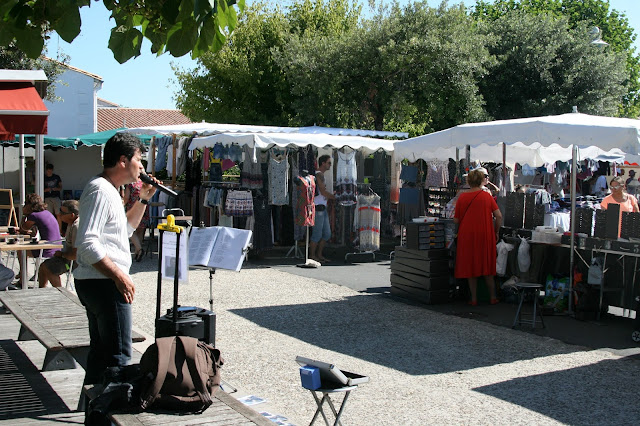 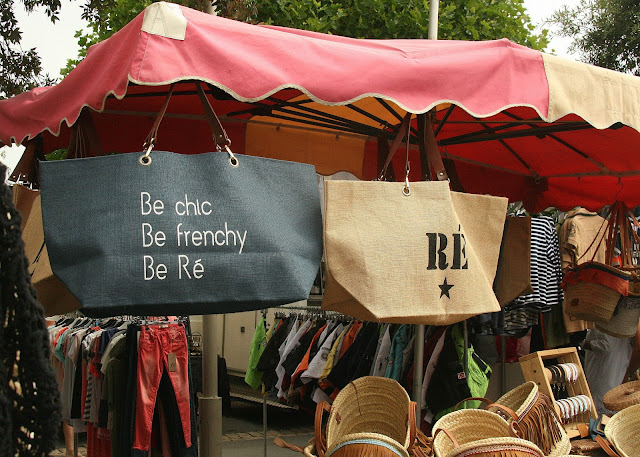 It was always a pleasant ride through the village.  So picturesque and so very quaint.  On the edge of the village of Loix, there is also an artisan village where there they made honey, soap and other products.  A very interesting detour to learn more about island products!  My youngest enjoyed an afternoon workshop at the honey factory where for 6 euros, they taught the kids all about bees and how honey is made - and then the kids made a beeswax candle and brought some honey home.  She loved it! 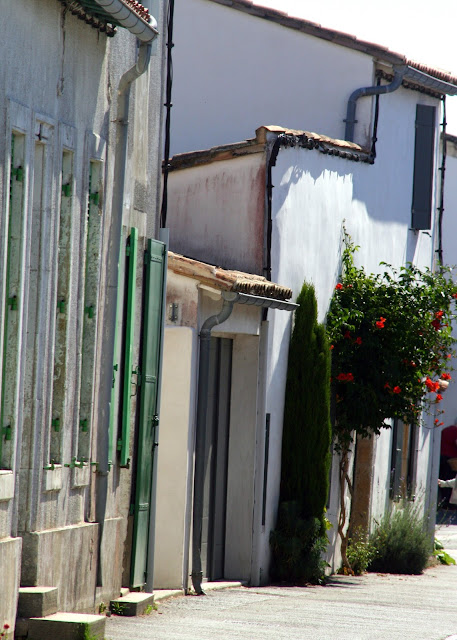 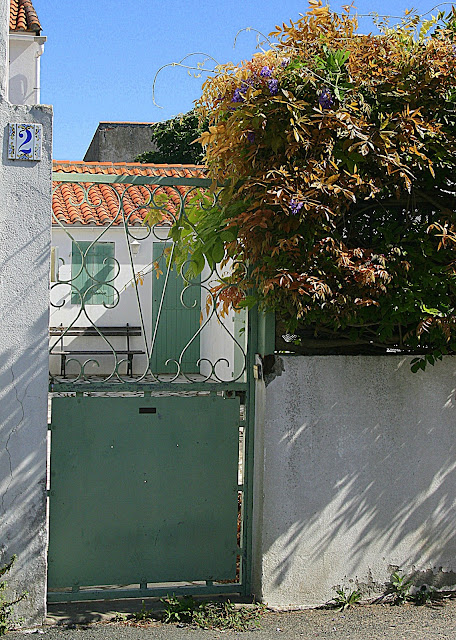 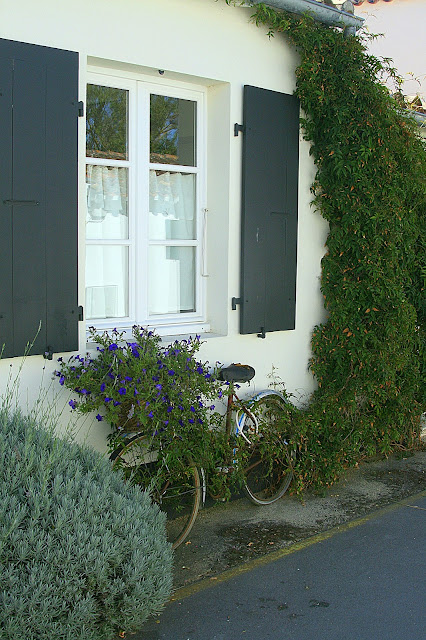 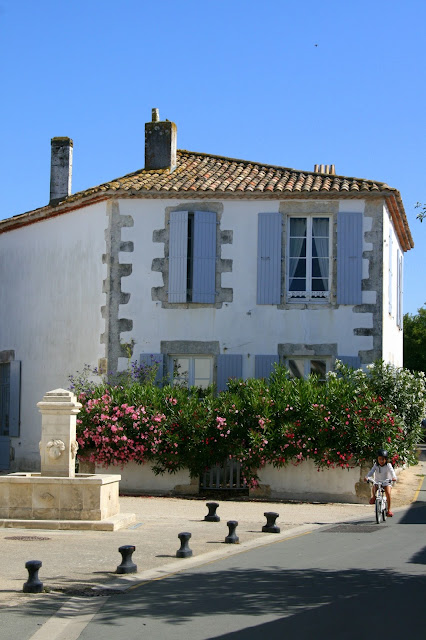 From the campground, we could easily ride to the Northern shore of the peninsula.  We rode out there the second evening just before sunset and the colors made it a magical ride. 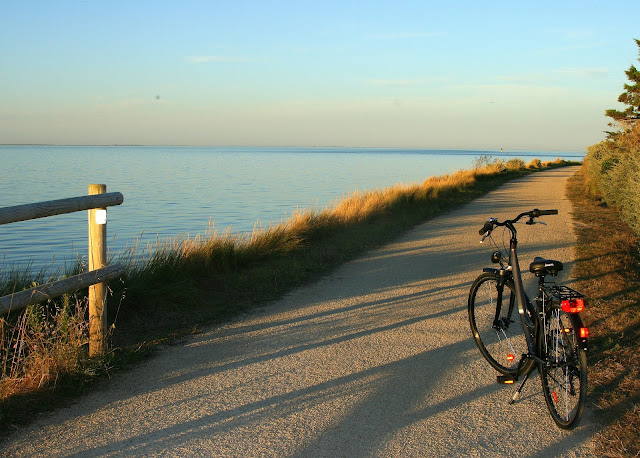 We wound our way around the Northeastern tip to the harbor and Plage du Grouin.  The reds and oranges in the sky gave way to purples, pinks and violets...just so beautiful!  So relaxing and I could just stand there and breathe it all into my soul. 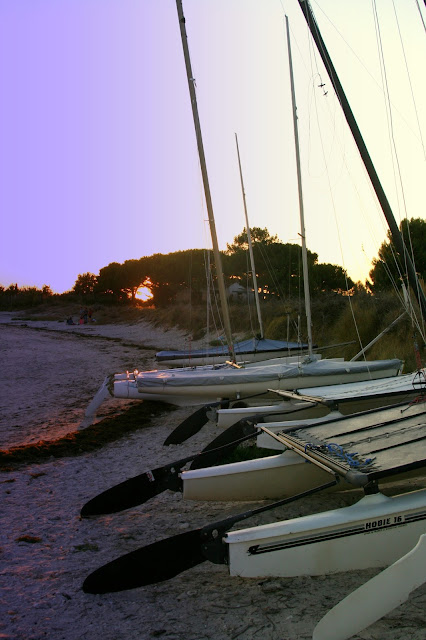 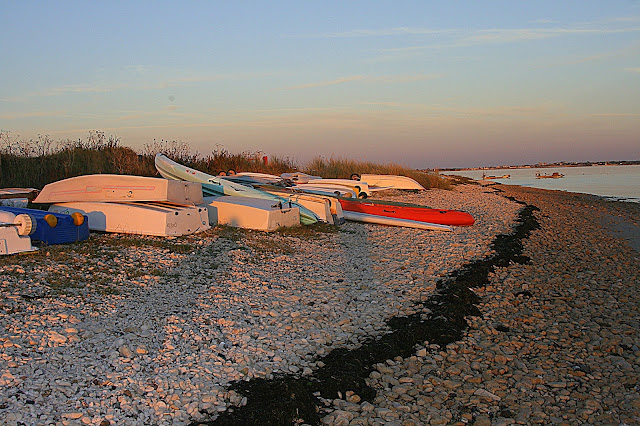 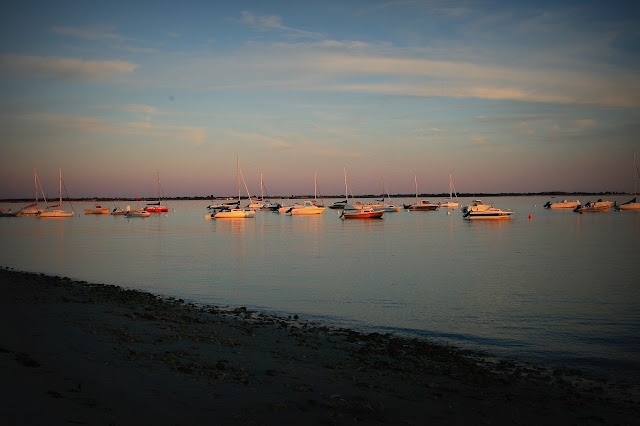 As the sun ducked behind the trees, we turned around and rode back to the Northern tip to watch the final descent.  The colors were spectacular.  If you follow me on instagram, you would have seen photos from my phone last week. 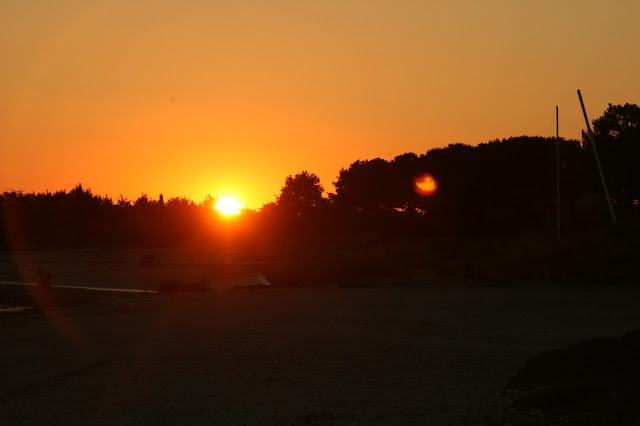 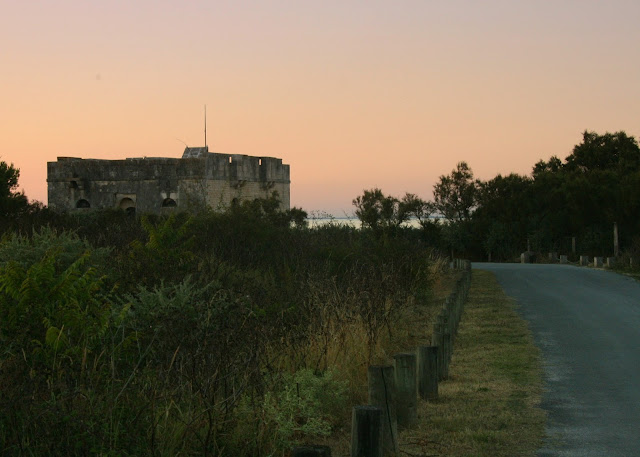 The old medieval fort, I'm sure holds many stories and loads of history!  Will need to look further into it's significance. I know later in history this island served as a detaining site for prisoners before they were exiled to the "New World", especially to French Guiana.  We didn't take too much time to explore as we wanted to make it back to the Northern point of the shoreline path to see the final colors and descent of the sun.  There is just something beautiful and peaceful to see the sunset reflecting on the water. 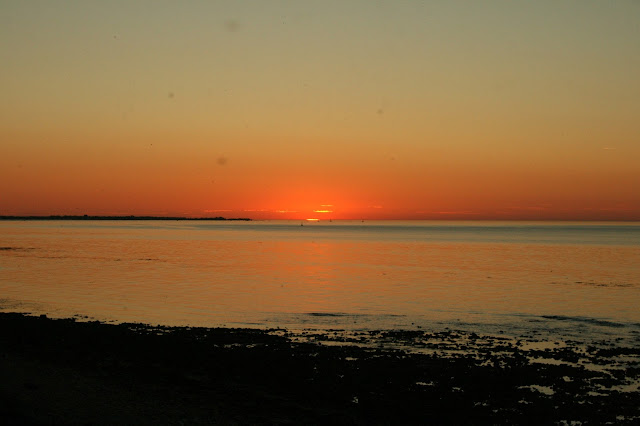 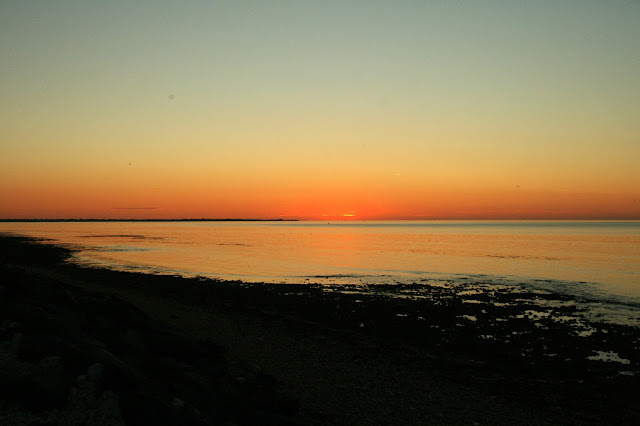 The next day, we decided to do more exploring of Loix and found it's port amongst the salt marshes.  The tide was out and it was interesting to see the water from the dam pour through the tunnel.  The tidal marshes on Ile de Re provide the perfect geographical spot to harvest salt.  It's all raked by hand on Ile de Re - a long standing tradition here. 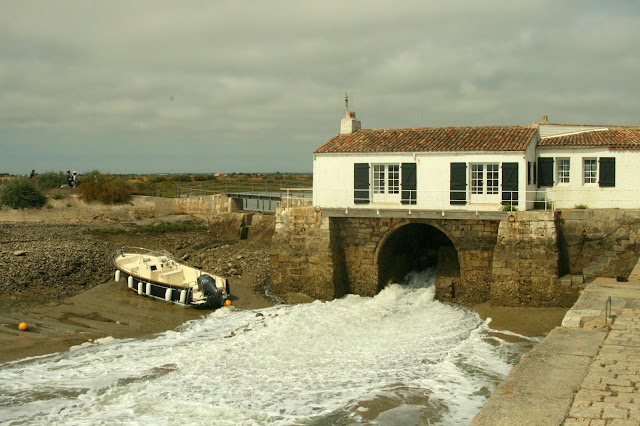 As we rode out from the Port of Loix, we head toward the main part of the island. between the peninsula of Loix and the main part of the island - it's all salt marshes.  Watching the differences between high tide and low tide and how they raked and harvested the salt was fascinating.  There is even an eco-musee located on the road to Loix, where they explain the process.

Yes, in France, I often buy local and have long enjoyed the salt of Ile de Re - but being there and seeing it gave me a new perspective on this product! 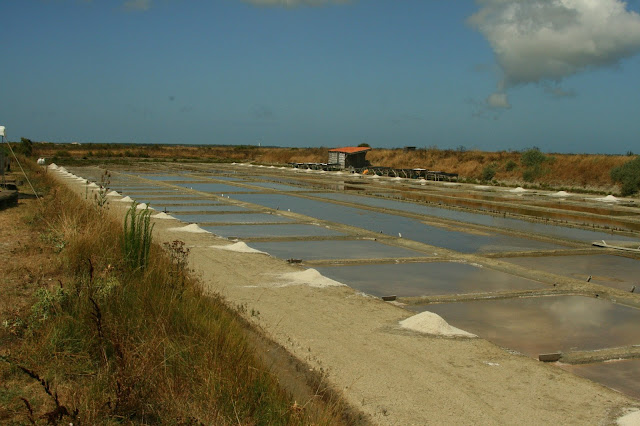 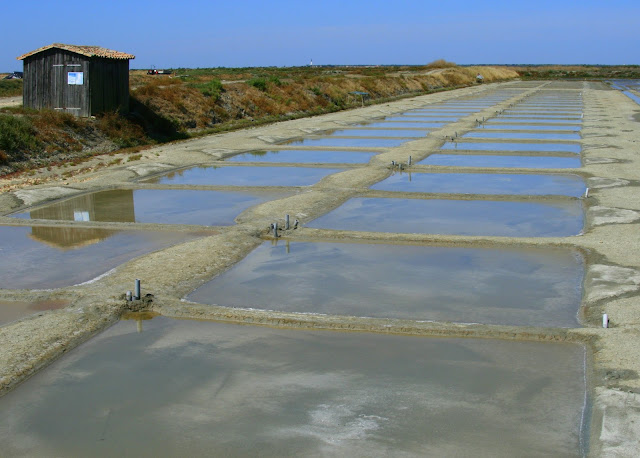 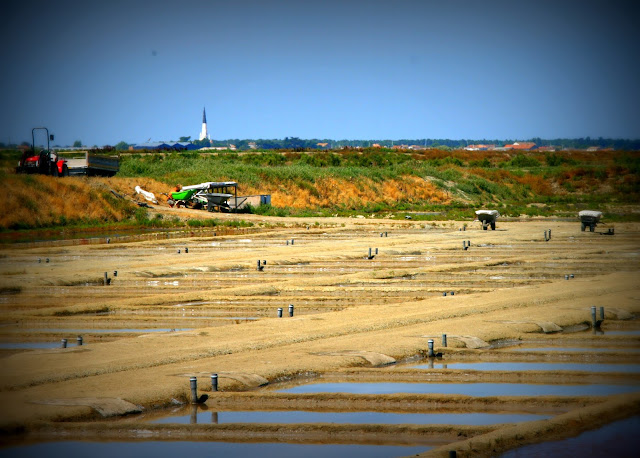 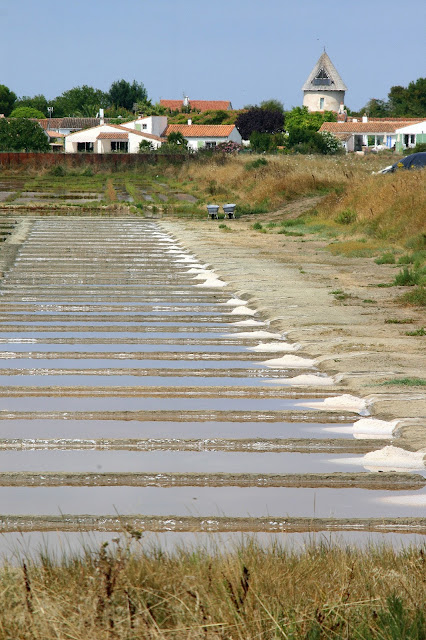 This post is just a small sampling of the photos that I took during our vacation.  Such a beautiful spot and we enjoyed balancing biking, sightseeing and relaxing at the same time!  The campground provided a great place for the girls to make friends, hang at the pool and enjoy fun activities.

I'm still sorting through all of my photos and will be sharing about other towns on the island - 2 days we rode between 25-30 kilometers - starting at our campground and visiting the towns of both Ars en Re and Saint Martin en Re.  Look for upcoming posts on these 2 adventures with more photos of this idyllic quaint island.

Posted by American Mom in Bordeaux at 12:26 AM