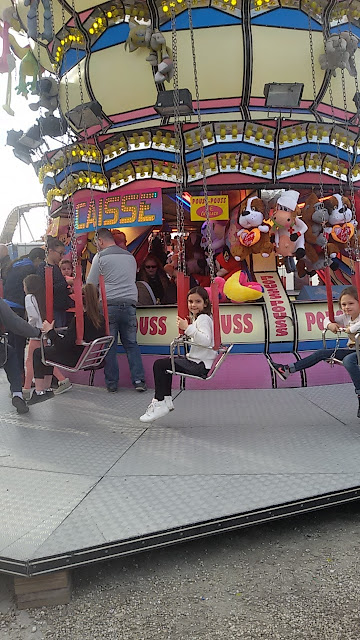 The City's Fun Fair - La Foire aux Plaisirs
Having lived now in Bordeaux for over 4 years, I have grown accustom to many annual French traditions.  For Bordeaux, one of these traditions is La Foire aux Plaisirs or The Fun Fair.  This carnival sets up twice a year in Bordeaux - once in October and again in March. They take over the large open space in the Quinconnces Square mixing colorful rides within the historical monuments. Yes - it's a carnival similar to ones I've seen in the States but it's the tradition and today being that it's International Francophonie Day - I thought it would be fun to share the "French" version of a Carnival or Fair, along with some new vocabulary words.  A special promotion is found at the bottom of this post. 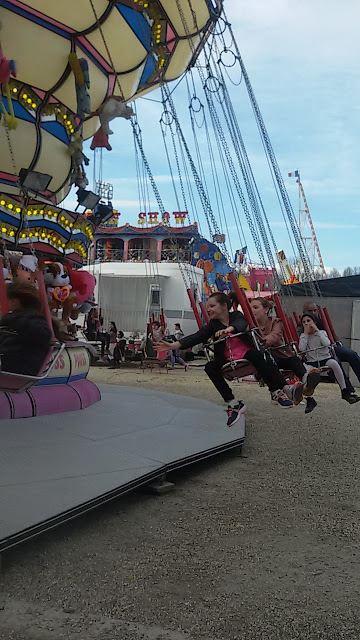 This event is something that my kids look forward to and believe me always ask to go!  As with most carnival rides, this event can certainly empty one's wallet very quickly with rides ranging from 2 euros to 5 euros each round.  Multiply this times 3 kids and yes, one can spend a pretty penny!! I still remember the first time we went - getting use to all the carnival terms - the names of the rides - of course were different in French - and  it was so much fun to learn!!  My favorite - La Grand Roue - or the Ferris Wheel!!  Doesn't it sound cool in French? 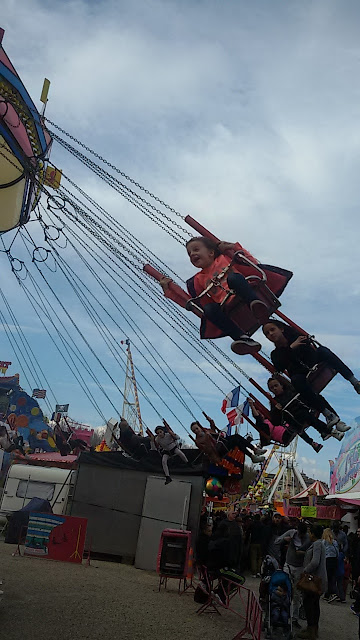 Here's the Swings or Pousse Pousse - as they call it in French.  The fun thing about this ride is that the kids have to "push" or pousse their swing to try to grab a stuffed animal prize. 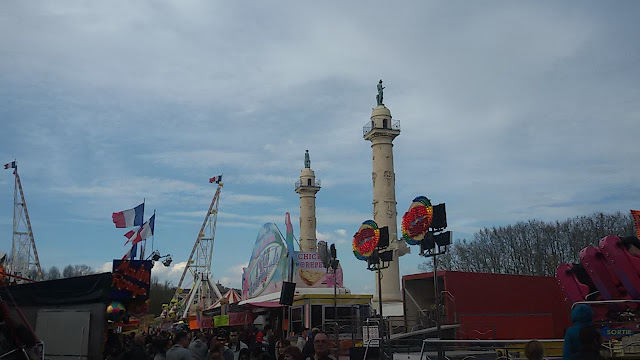 My youngest daughter enjoyed her share of the swings, the fun house and some other games.  Of course, no fair/carnival is complete without cotton candy or as the French call it - Barbe de Papa (Papa's beard).  Candy Apples or Pomme d'Amour (Apples of Love) are also a very popular snack. I love the mix of the old Bordeaux monuments flanking the carnival at each end. 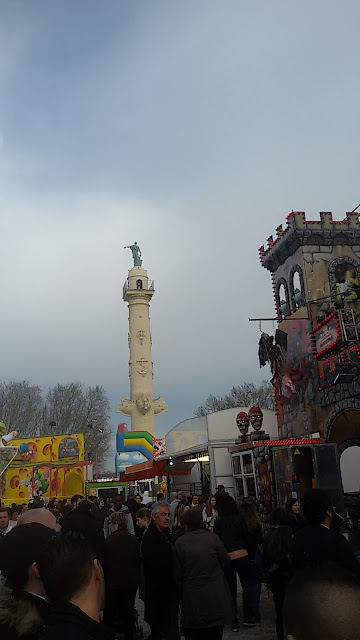 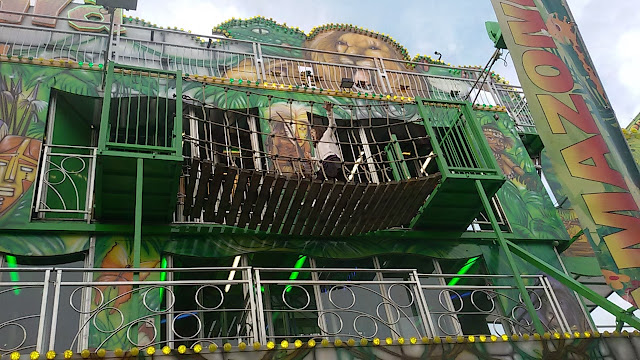 Here's my daughter making her way through the jungle fun house.  What was neat about this set up was she - along with the group she was following, ended up wandering around the inside about 3 times.  This made for a lengthy fun time - although - she was laughing by the time she realized she was walking the same platform for the 4th time - no fear - they all found the exit eventually- (I think the leader of the pack was an employee who was purposely wandering them around and around for the fun of it) - It is called a fun house isn't it? 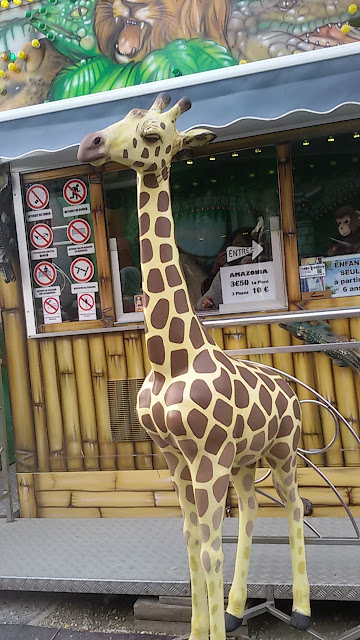 I love the bright colors of the carnival or La Foire - a real feast for the eyes.  It's always nice to see people having fun and enjoying themselves.  My youngest at 8 years old likes the tamer rides - she's not like her daredevil older sister who certainly enjoys all the topsy-turvy fun that can be had. 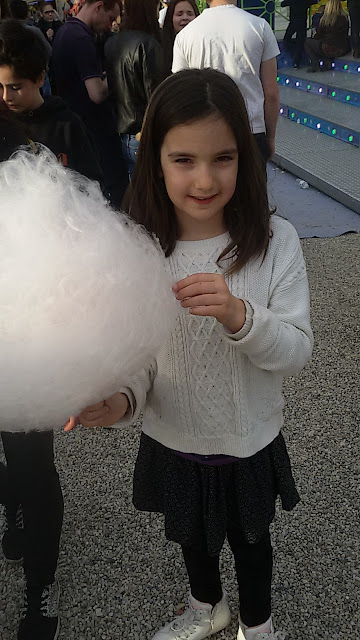 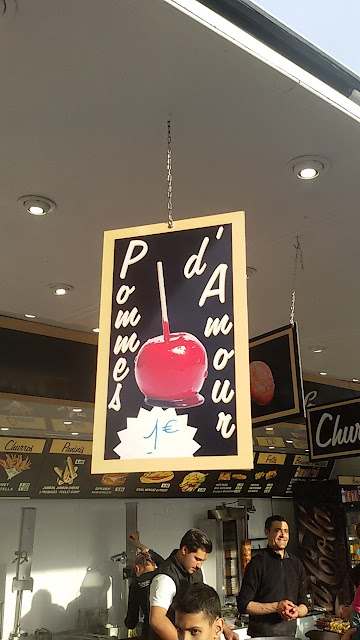 So if you ever visit Bordeaux during La Foire aux Plaisirs.  It's certainly a local event that brings out most Bordelais families - so if you want to act like the locals, here's the place to be!!  It's definitely something that we enjoy every season it arrives!  It's also a great way to increase your French vocabulary! 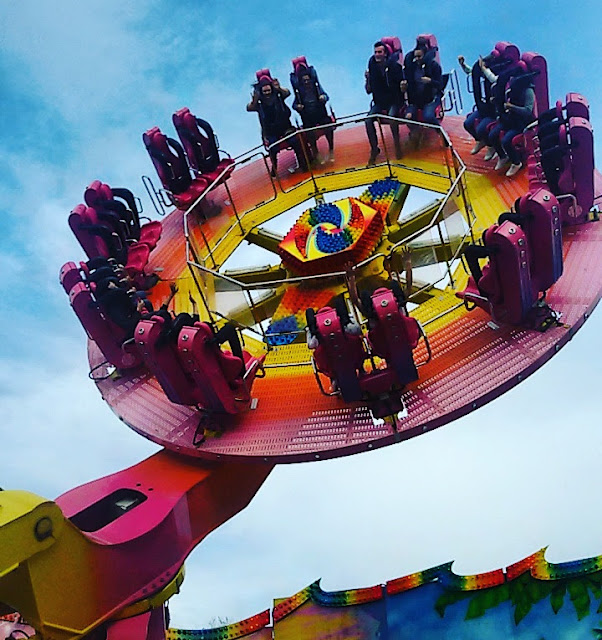 In honor of International Francophonie Day - I'm offering a special promotion to learn French or increase your vocabulary check out - a one MONTH FREE TRAIL with Frantastique - It's a wonderful way to customize your learning and become a Francophone!!  Why not use this international day of celebration as a great way to kick start your desire to learn - Just click on one of the banners below to learn more!! 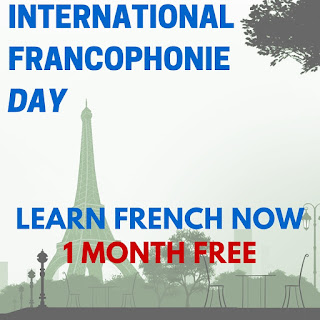 Posted by American Mom in Bordeaux at 1:38 PM