Last night President Macron spoke again to the French people.  We have moved into stricter confinement and we are now only allowed to leave the house for limited authorized reasons.  Here is a link to his address dubbed in English.  He is calm, serious and  reminding us all that we are all in this together.

This morning the media has continued to clarify what is allowed and what is not allowed. Obviously, there are still a lot of questions and of course, the moment human beings are forbidden to do something is the moment we search for exceptions!  For us, last night's announcement was expected but it generated a lot of stress in our household.  As I share custody with their father, and the girls travel back and forth between both households, it was not clear if that was to be permitted or if the girls were confined to my house for the next 15 days.  The question running through everyone's head was which household and of course one parent would likely be disappointed.  Their father was due to pick them up this Friday, but if we were confined in theory that wouldn't be allowed. The government had given the French this morning to get themselves settled into one place which would be home for the next 15 days.

During a time like this, one can see that having both parents active in their lives is what children need.  But as as they were faced with possibly having to chose one parent over the other, this was extremely difficult and generated a lot of stress.

Luckily for everyone's peace of mind, early this morning it was clarified by the media/government that picking up and taking children to the other parent's house would be authorized for families that have shared custody.  A big sigh of relief for all of us!  For us, the 2 older girls had been alternating weeks between their father's house and mine.  My youngest spends school weeks with me to shorten the distance between her father's house and her school.  However, as they are all on home schooling/distance learning, all 3 of them will alternate weeks in this trying time.  I have to say, I'm impressed that the government really tried to think of everything and  for families.

Additionally, as parents, we are allowed to take our children outside to open spaces or for a walk/bike ride close to home as long as proper/safe distances are maintained from others.  Obviously, no play dates or meeting up in parks/squares with other parents & children.  The idea is for the physical well-being of children, they can get outside and get some exercise but in isolation.

So with having a little more clarity to our new life, new routine, we started our second day of distance learning.  Basically between the hours of  9-12 and 2pm-5pm, it's study/reading educational hours.  For all of them they have assignments to do and when done, it's foundation/curriculum review.  We have numerous review sites of the French subjects and of course there is reading in French or English.  As the girls are older, it's a bit easier for me than for those with younger children. 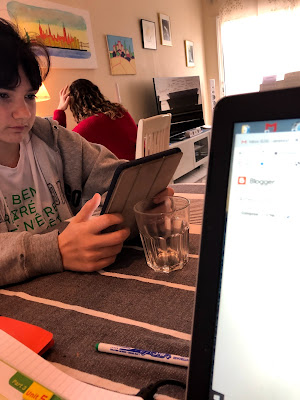 So here we sit, all of us at the dining room table or desk working/studying or writing.   For us adults, there seem to be an on-going stream of messages on WhatsApp, messenger groups - keeping humor and everyone's mood lighten.  Jokes between neighbors and  funny videos help to lighten the up the situation.

The toughest part for me is keeping my youngest daughter on task and finding that balance between short breaks and her studies.  Yes, she has a base curriculum to follow on the French distance learning site and additional assignments directly from her teachers.  But like the students, the teachers are adjusting so these assignments are arriving slowly.  She seems to still have a fair amount of free time, so I am trying to fill in the gap with her reading, physical exercise (inside & outside) and just general curriculum re-enforcement.  But of course, she's a teenager, so her first reaction is often, but it's not required or no, I'm not doing that!  Mom as her new teacher is certain a new challenge for both of us.

Further as a parent of  that same pre-teen finding that delicate balance of  the use of her telephone is another battle.  In fact, since her school agenda is accessed by it, along with being able to communicate about certain assignments with her classmates, plus study groups - so it's a bit hard to just take it away.  But at the same time it can be very distracting as her friends may or may not being doing their work at the same time.  So there are times, I take it and other times she has it.  But of course, being 12, she would prefer to have it all the time. Oh joy, it will be a long 6 weeks or more of homeschooling.

We will see tonight if the French are adhering to the new rules - it's now interesting to watch the evening news to follow what's happening not only in France but all over the world.

Hang in there everyone...

Posted by American Mom in Bordeaux at 3:43 PM