It's now Friday afternoon - The girls have left to spend a week at their fathers.  We survived the first week of homeschooling - Distance learning.
Yesterday we continued our schedule of 9-12 and 2-5 pm of homeschooling.  I have to say it's nice to have older kids.  I do consider myself lucky that they are the age, they are.  I thought several times yesterday if this crisis had happened 10 years ago...when they would have been 2,6 and 9. So yes, I think of my friends, colleagues and readers who are at home with 3 young children.  I remember vacations when the 3 girls were that age and how a week felt long but I knew it there was an end.  So my thoughts are with those of you who have young children - it's not easy and I know it's tiring.  It always helped psychologically to know the end.

That's the problem here - we don't know how long this will last.  The government said 15 days of strict confinement but it's looking more and more like it will be extended to really try to keep this virus from spreading.  So we wait.

As I said in an earlier post, my challenge is my youngest daughter - keeping her on task and verifying that all is completed correctly.  Of course, like any other week - she's also more tired by the end of the week.  It was also hard for her to really understand that she needed to go to bed like it was any other school day.  Especially difficult when she shares a room now with her oldest sister (who is normally in Paris).  In any case, by the time yesterday and today rolled around - she was definitely more tired. Luckily with the 2 older girls having plenty of work to keep themselves busy - the ambiance in the house was quiet and studious.  This helps.  So we yesterday and today looked very similar - routine of studying and meals.

Last night we talked around the dinner table as to how it felt to be home like this.  They were reflective that it wasn't too bad - they were busy and found things to do when they were done with their school work.  Listening to music and talking/face timing their friends in the evening worked too.  They also considered themselves lucky that they could switch houses every other week - gave them a bit of variety in their environment.  They laughed and said - it's actually nice to have parents who have split apart.  (And yes, I agree  - that's the one benefit for me also- a week with them and a week without them.)  Our time together also gives them more time together and more time to pursue other interests, like playing the piano more. 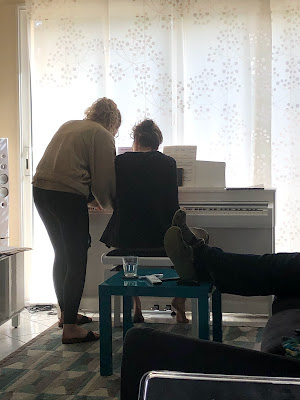 So as we end this Friday afternoon - we have survived the first 5 days of home schooling and the first 4 days of strict confinement.  We have chosen not to exit the house/yard but will have to go get groceries early next week.  We have already placed our order at our local "drive" grocery store.  This is where you can order on line, and have it prepared and brought directly to your car.  I am not the only one who is doing this, so we need to plan ahead and wait up to 48 hours for a pick up time.  I can see we are now living in interesting times.  Yes, we can still go to the grocery store, but I like many others are trying to avoid our exposure to others.   So I have no interest in lining up and going through a grocery store unless I absolutely have to.

As we watch the news - it seems like it is getting worse and worse (more and more cases and more deaths)- which is understandable as we are still very early on in this confinement.  The news can be addictive but also disheartening.  I found a really interesting site - Worldometers where statistics for all kinds of things are listed.  Of course now, they are tracking the numbers for Corona Virus.  I was a bit disturbed as I looked at the numbers in France - we seemed to have a large number of people on respirators (indicating severely ill) as compared to other countries.  Other countries seeemed to have numbers that indicated that every though they were identifying cases, less in severe state.  But then I read that each country tests in their own way.

France began testing cases in a way that they called - targeted.  This meant when one case was identified - they then went on to test family and others who were in close contact.  This kind of sampling often showed both positive and negative tests but also gave a more rounded sample of degrees of severity.  So initially when we looked at the numbers - it was said that over 85% of people who tested positive showed little or no symptoms.

However, in France as the outbreak increased, they didn't want to test every single person who was in contact with a positive case.  They were concerned about not having enough tests as the virus spread.  So now they only test the most severe cases.  The cases that arrive at the hospital when they are really in respiratory distress.  For those who are worried and feel they show the symptoms, we are encouraged to call the emergency number and consult with a medical professional.  They will decide if the symptoms are severe enough for the person to go to the hospital.  If the symptoms are not too severe they will treat the person for the symptoms like its the virus and the person stays at home in isolation - so not to spread it to their loved ones.  They are then followed medically remotely and unless their symptoms worsen - they recover at their own homes.  But these cases are not tested now, so there is no positive test to demonstrate that there is a large number of people who recover from the virus.  So this means two things - one that the case numbers is probably a lot higher than the actual numbers but also that there is a higher percentage of recovery than is indicated by the statistics.

I share this for the country of France.  I do not know how other countries are actually testing - I read that each country can choose their style and sampling for testing.  But in any case, it's helpful to understand the statistics and also to know that this virus is definitely highly contagious but also for many not overly serious.  But in any case,  it's best to remain isolated.

As I have said before China was confined 45 days  - so we won't see improvement for a couple weeks.  But it will seem long - that's why it's best to go day by day.

So as we continue into the weekend - I dream about better times and today I share one of my favorite chateau - Chateau de la Rivere in the Fronsac Appelation - This beautiful chateau is a wealth of history and wine and was a delight to tour back in February. 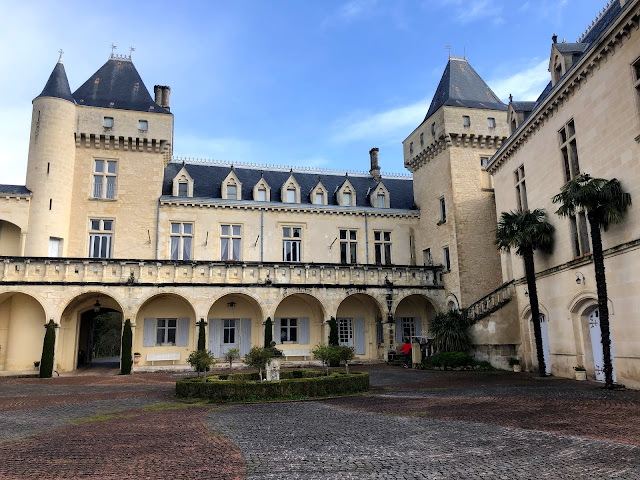 Bon Courage everyone, wishing everyone well and enjoy the weekend!!

Posted by American Mom in Bordeaux at 7:29 PM