Announcement - American Mom in Bordeaux is evolving - Changes are happening 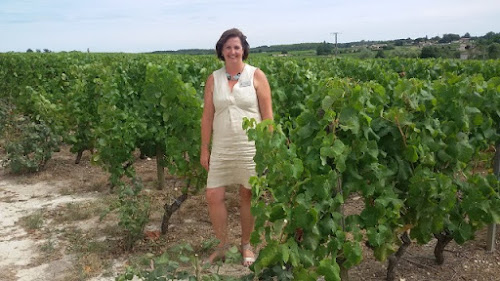 If you have been following me on my social media (instagram and facebook) you will have noticed that big changes are happening!  American Mom in Bordeaux will be becoming My Bordeaux Tours with Jennifer Poe.
Why the change? Evolution and growth.  Originally American Mom in Bordeaux was started back in 2012 (wow - 8 years ago!!) as a blog to share my experience as an expat and our family experiences as we adjusted to a new culture, new systems and life in general in a new country.
As a family we have grown, we have changed - we have evolved.  My daughters who began their life here in France at 4, 7 & 10 years old  are now 19 (having finished her first year in a French Prepa University program in Physics & Chemistry), 16 ( currently attending high school with specialties in Literature, History and Politics with 2 more years left) and my youngest is 12 will be entering 5eme or 8th grade at our local middle school in the Fall.  They have moved through the French education system - each in their own way, each with their own experiences. 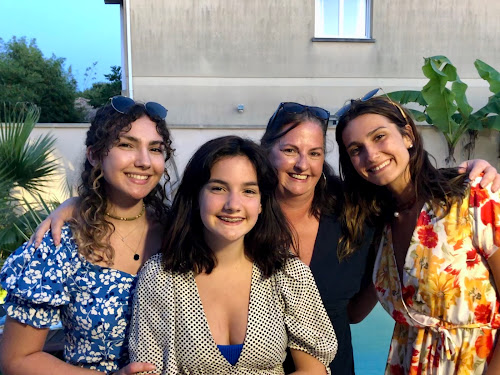 As a family that initially arrived here as one unit, and we have divided into two.  Yes, although I didn't share much about this aspect of my life, we too like many couples  separated and divorced.  It was not easy on the family but we have evolved, we have all moved on.  The girls spend every other week with me and now that they are getting older - of course they spend a fair amount of time with their friends.
For myself, I have happily met someone new and between us we have 4 teenage girls.  Needles to say with 4 teenagers - the house can be very dynamic at times between all of them and their friends.  But then we have quiet time too - a benefit of being a recomposed family.
I have been happily working as a local & regional tour guide for the past 6 years.  Our seasons normally run between March and November and this opportunity has given me such an appreciation for this beautiful area that is not just about the wine!!  Yes, the wine is great too - but this area is so rich and dynamic in history.  This whole experience has peaked my love of history and wine.  I have even taken Wine & Spirit Education courses (WSET 2 & 3) to enhance and broaden my general knowledge of world wines.
Through my work, I have met so many wonderful and interesting people.  I have mainly worked for the river cruise companies (Viking Cruises, Ama Waterways and Scenic Cruises)  that sail along the Garonne & Dordogne Rivers.  I have so enjoyed my ongoing learning about this area and all the small towns surrounding Bordeaux in addition to fully understanding Bordeaux wine and it's special blends. 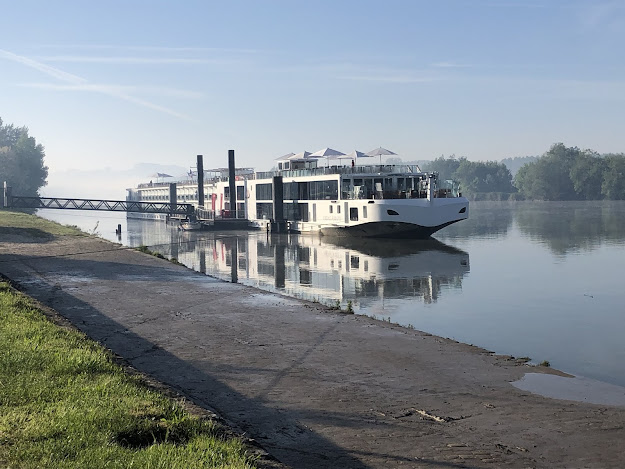 I will be continuing my work with the river cruise companies - I adore all my clients and we have shared some great moments together.   I am complimenting this work with these small group walking tours in Bordeaux and recently I have chosen to pair this experience with a wine tasting at one of my favorite local wine bars. You can read more about my tour on the website.
Given the evolution of my life, the girls growing up and a more refined career focus, I have chosen to recreate my blog into the new site My Bordeaux Tours with Jennifer Poe and bring the blog along with it.  I will be continuing to share like before - photos of this gorgeous area and articles about what there is to see and do both in this area and in France, along with some of my experiences here in France.
Please come follow me & add yourself to my mailing list at My Bordeaux Tours to stay up to date on posts and news.
For those who come visit Bordeaux, you will see what I directly offer for tours - but of course there is always the opportunity to customize a tour to your liking.
I look forward to this new chapter and new beginning... and hopefully see you in Bordeaux sometime soon!!!
Please feel free to follow me through my social media
Facebook - @mybordeauxtours
Instagram - @mybordeauxtours
Twitter - @MyBdxTours
My best to everyone!
Posted by American Mom in Bordeaux at 6:47 PM 1 comment: 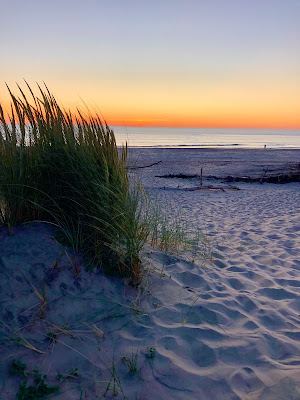 So here we are mid June - life is definitely returning to normal...along with new rules. It's funny to realize that it's only been a few weeks since lockdown was lifted, as it's been progressive.  Even during phase 1 - businesses and stores began to reopening progressively.  We all laughed as the first day after lockdown it rained - mother nature's way of reminding us to take it slow.  Honestly with all the regulations in place, it's reassuring but takes a bit of thinking to go and run errands.
Just to get a haircut (and believe me after 2 full months in lockdown -I badly needed and wanted one!) - meant deciding if I was going to brave public transportation or pay to park in Bordeaux center- mask on both in the tram and at the hairdresser - 2 hours with mask on and then returning home... it's a new life.  I wear my mask and feel protected but it's still different and not feeling normal at all. 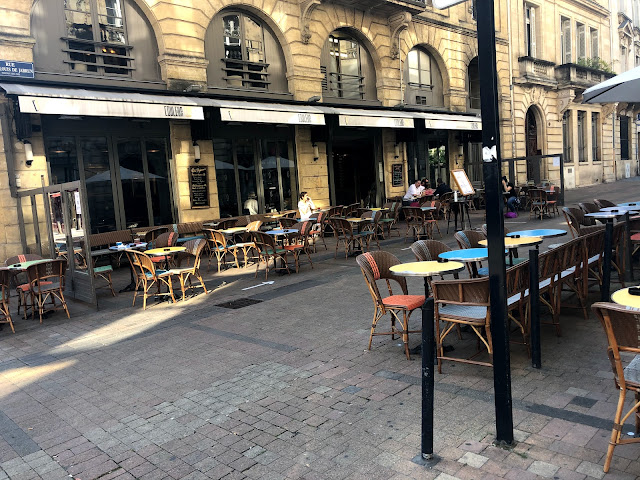 So back on June 2 - France entered phase 2 of deconfinement.  France was divided into green and red zones indicating where the virus was still circulating at different percentages.  Green zones were good and ready to begin reopening and red zones had to take things a bit slower.  Paris & ile de France was still identified as an orange zone...(better than red but still not green).
As France entered this new phase, earlier rules began to relax for all.
Bars, cafes and restaurants could reopen fully in green zones but in orange zones only outdoor terraces could reopen.
Reopening of schools was accelerated with all schools aiming to reopen in all zones, although maximum class sizes of 15 still remained in place, so most pupils would be attending part time.
The 100 km distance rule from phase 1 requiring certificates for a journey of more than 100 km from their home ended.
All beaches and lakes reopened ( with sanitary measures still in place - i.e. for walking,swimming, physical activities in the sand but no picnicking or sunbathing yet).  Theses were called - active beaches.
Gyms, swimming pools and leisure centers  could reopen in green zones but not in orange/red zones - again with health protocols in place.
Theaters and museums reopened in green zones but not movie theaters/cinemas or large stadiums.
Tourist accommodations (hotels, motels and rentals) could open in green zones - again with proper protocols in place.
One could socialize with family but not in public in groups bigger than 10.
All of this was good news, it's been nice to slowly return to living life.  We started to enjoy getting out and about but, for the last week it's been rainy again - so it slowed things down a bit.  although,we were able to head out to the coast to enjoy the Atlantic and a lovely sunset and we are hoping to do more. 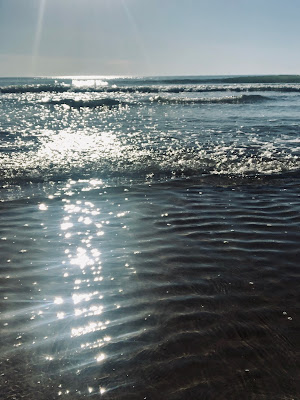 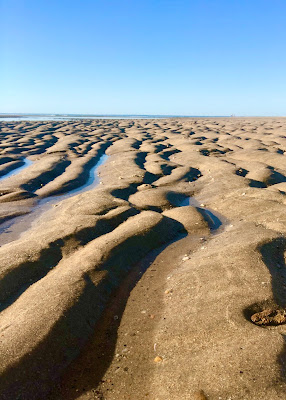 My work as a guide is still on hold - as we are waiting for foreign tourists to be able to safely arrive and it's looking like maybe September. We will see how the virus continues in other countries.  This allows me to enjoy the summer.  With European borders opening up, we are hoping to take our vacation that we had planned back in January - but nothing has been confirmed yet...in any case, this region is so beautiful and we can certainly enjoy a bit of a staycation if we need to.
Last night President Macron spoke to the country and thanked all the citizens for their patience and the acceptance of the lockdown rules for these past months.  Together we all helped to control the virus and he announced that it's controlled as of today (June 15) but not gone.  We still need to be aware and take precautions.  Everything is now open fully in all zones and cinemas can open across the country.  Only large stadiums and concert venues remain closed until mid-July.
Additionally, President Macron announced the opening of all childcare centers, preschools, elementary schools and middle schools as of June 22 and it's an obligation that all students attend (up until now, it's been the choice of parents is their children physically returned to school).  There will still be health measures and guidelines in place, but will be more relaxed.  They are using the models of other european countries (German and scandinavian schools)  that have fully opened schools within the last month and they are showing no increase in new covid-19 cases from children.  I'm happy that my daughter can see all her classmates and finish out the school year for some closure.
For high school students they are still doing distance learning from home but as high school class instruction is generally finished by early June to make way for the State exams beginning mid-month - this makes sense.  The government has previously cancelled all Baccalaureate exams for seniors and the exams taken at the end of Premier (or 11th grade), so high schoolers are getting to enjoy a bit of a longer summer, except for those who have classes or instruction to make up if their grades were not sufficient enough to pass.
France is moving in the right direction in any case.  Borders with many European countries opened June 15 and very soon ( in a week or 2 for many others).  There are still some countries that we can't travel to without a mandated 14 day quarantine - UK, Iceland, and Norway to name a few...but this could certainly change in the coming weeks. There has been no talk about travel to Canada or the US at this point.
As I said earlier - it's definitely a different life.  No "faire les bises" (kissing on the cheeks) when greeting friends - we have adopted elbow bumping with some of my friends - others it's just a big smile and a gesture.  One has to remember a mask when going anywhere....washing and rotating of the masks is an ongoing process.
So life continues as we head back to normal and as we head into summer. 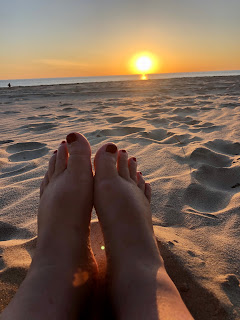 Posted by American Mom in Bordeaux at 2:44 PM No comments: