Springtime on the Quai - Bordeaux 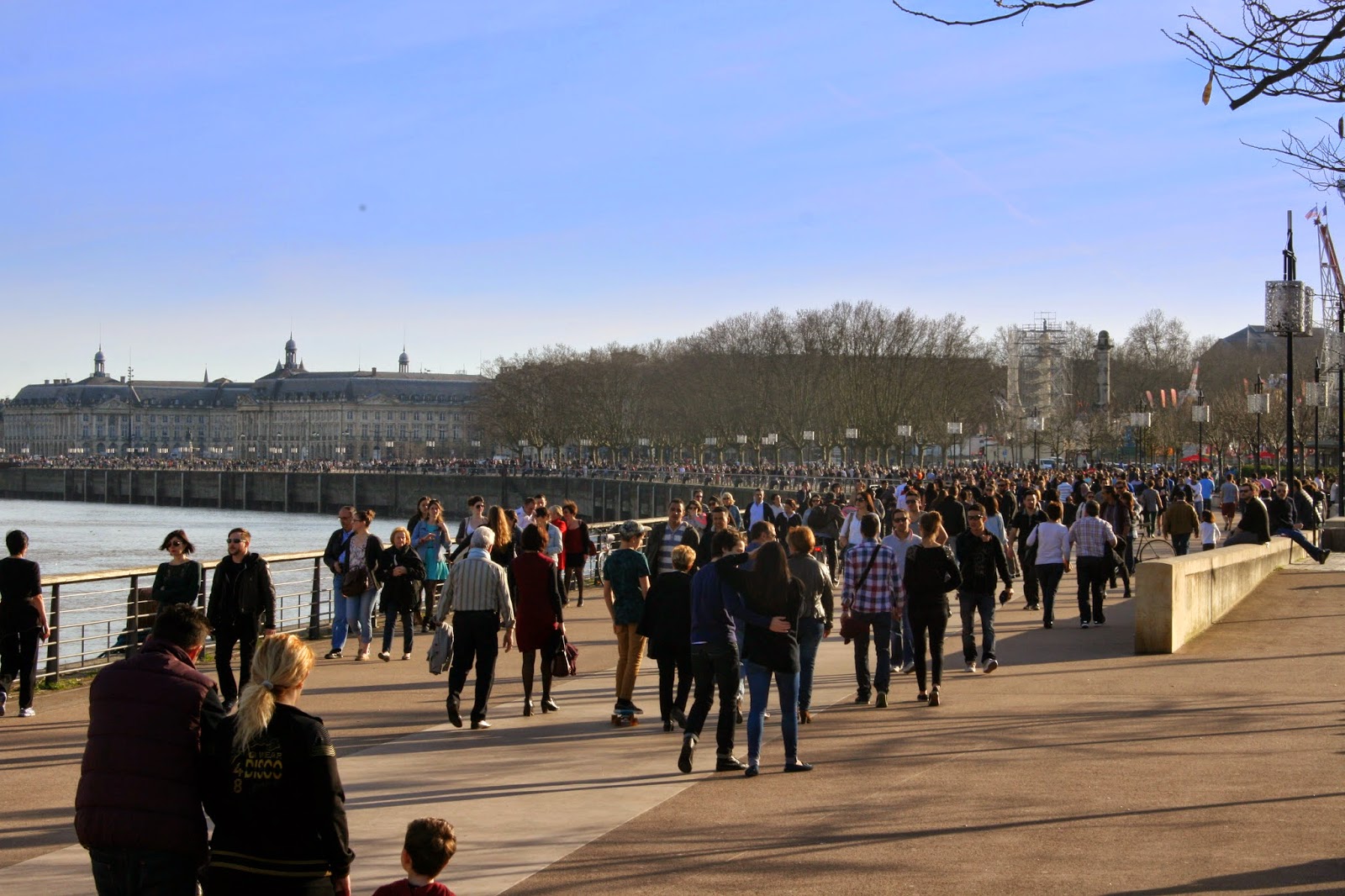 Spring Weather in Bordeaux
March arrived and Spring has sprung in Bordeaux.  We are not without our rainy days though - but sprinkled between the clouds and the rain - We have been able to bask in the sunshine and profit from some very lovely weather. The city is coming back to life after a Winter's slumber.  That's what I love about Bordeaux - a true Spring season! 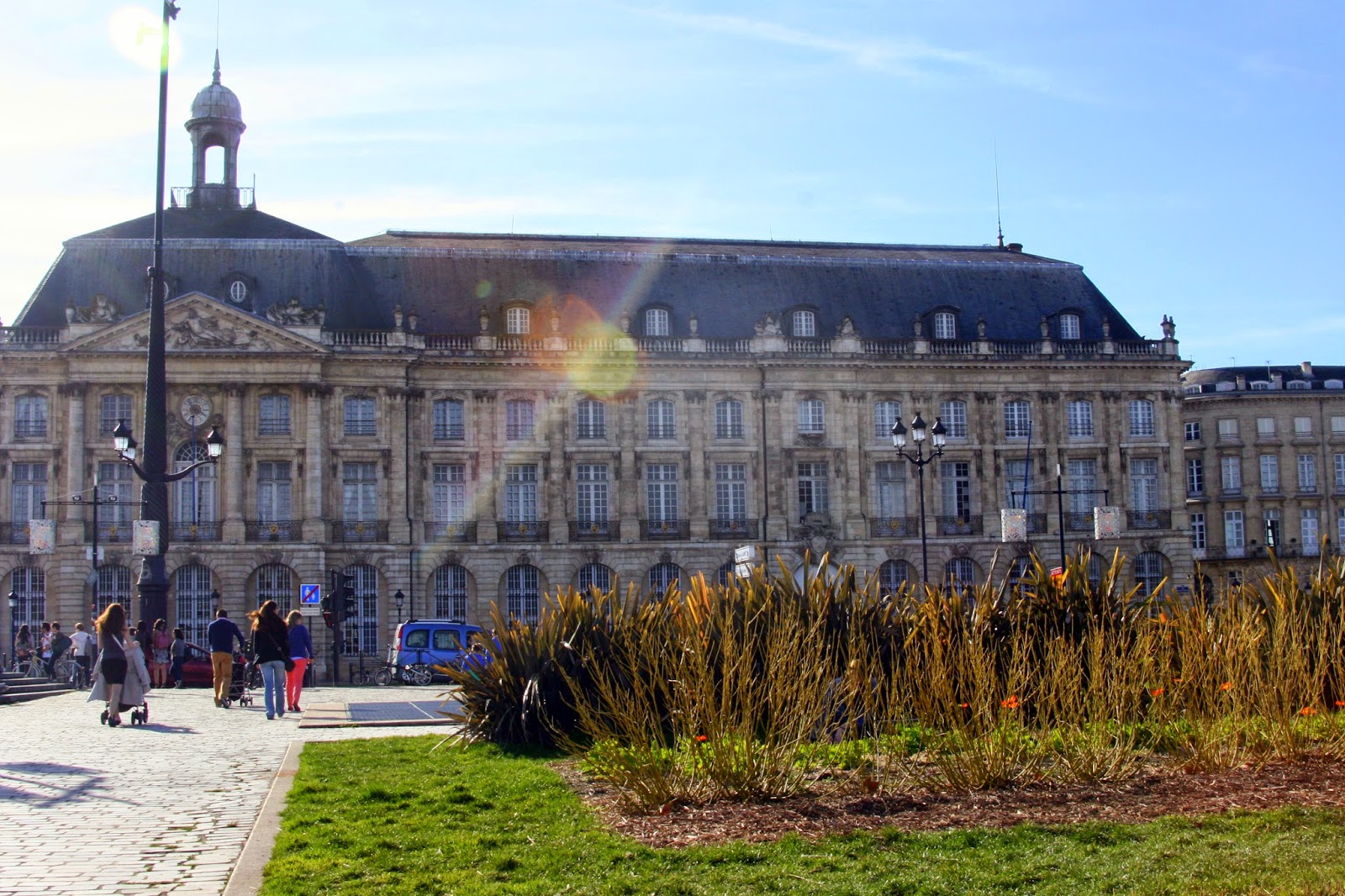 A couple weekends ago, the weather was beautiful!!  So Sunday afternoon - Camera in my hand - scooter and rip stick for the girls - we headed into Bordeaux to enjoy the stunning weather and walk/ride along the river.  As you will be able to tell from these photos - I think the rest of Bordeaux had the same idea!! Fun part is 2 weeks later - the girls are still talking about their fun afternoon along river.  It's amazing that the simple things can be the most rewarding. 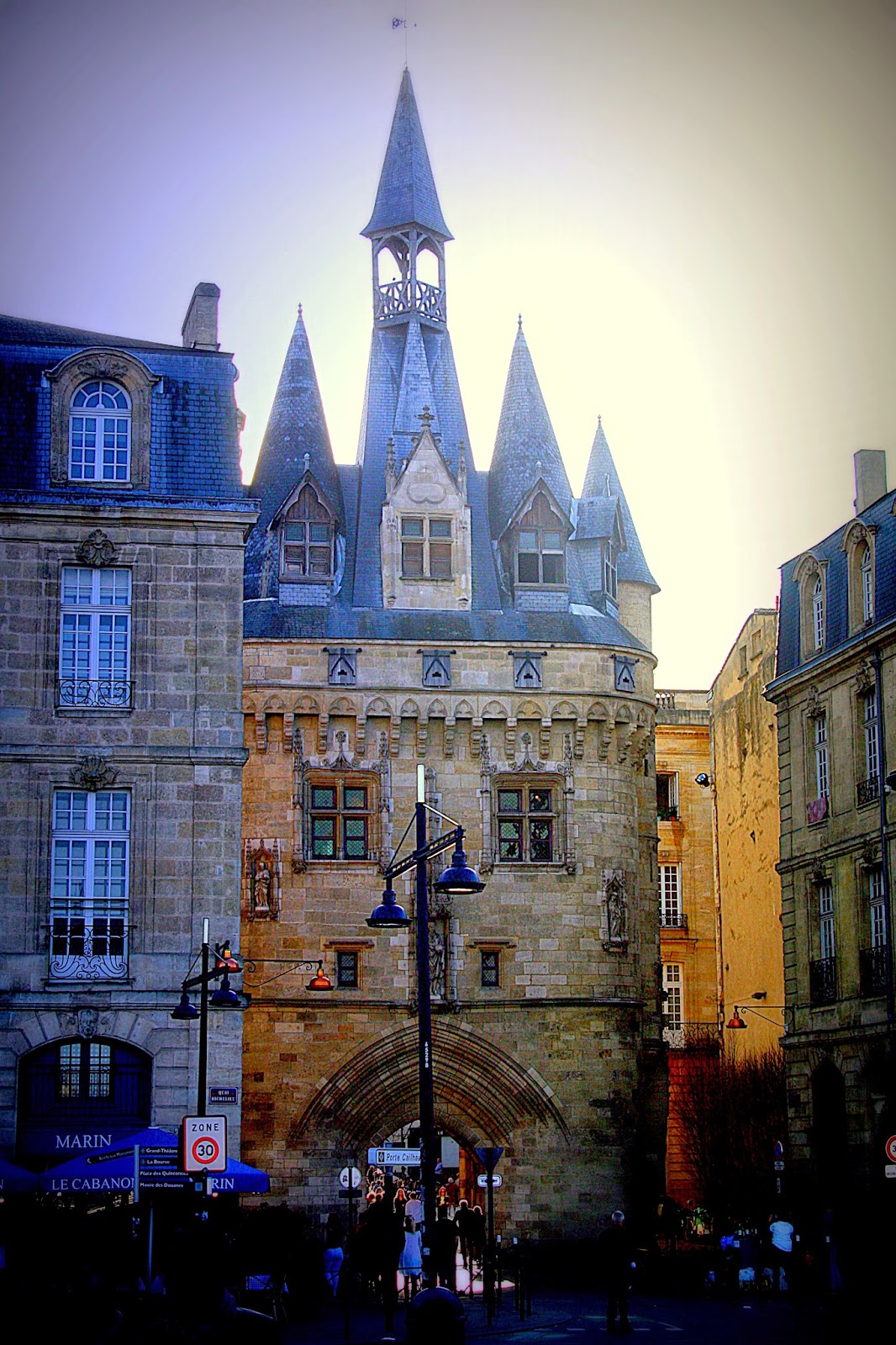 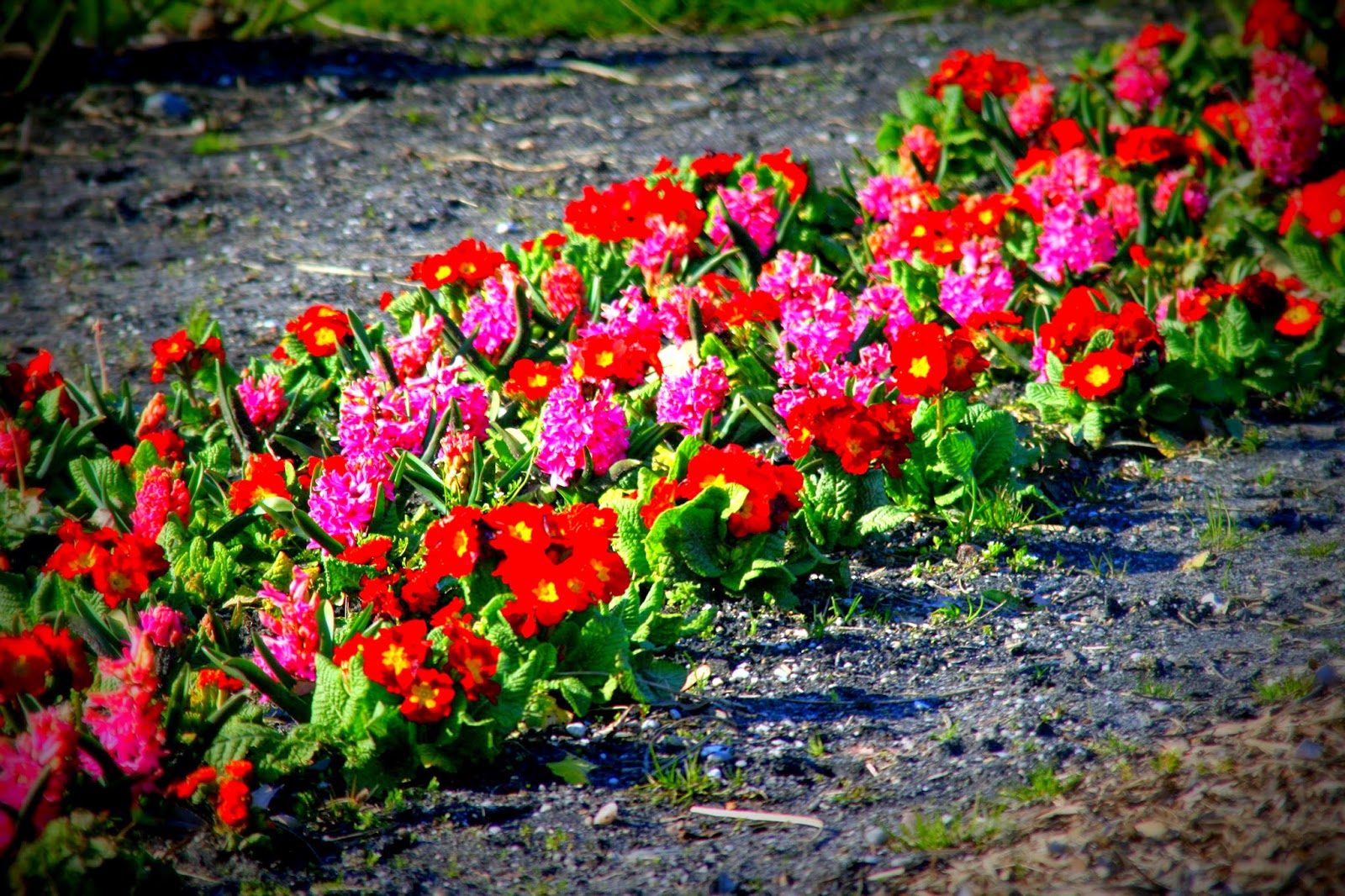 What amazed me was seeing the colors of Spring peaking through the grays of Winter. The sun on the limestone buildings and the magic of seeing everyone outside enjoying this beautiful weekend.  Most were strolling along the river - families, couples, groups of youth - just enjoying being outside.  It was lively and exhilarating to see.  People sitting in the gardens talking, having a snack, or just relaxing - Spring has arrived and Bordeaux is at it's finest!  This is so part of the French culture -socializing, relaxing and enjoying being outside. 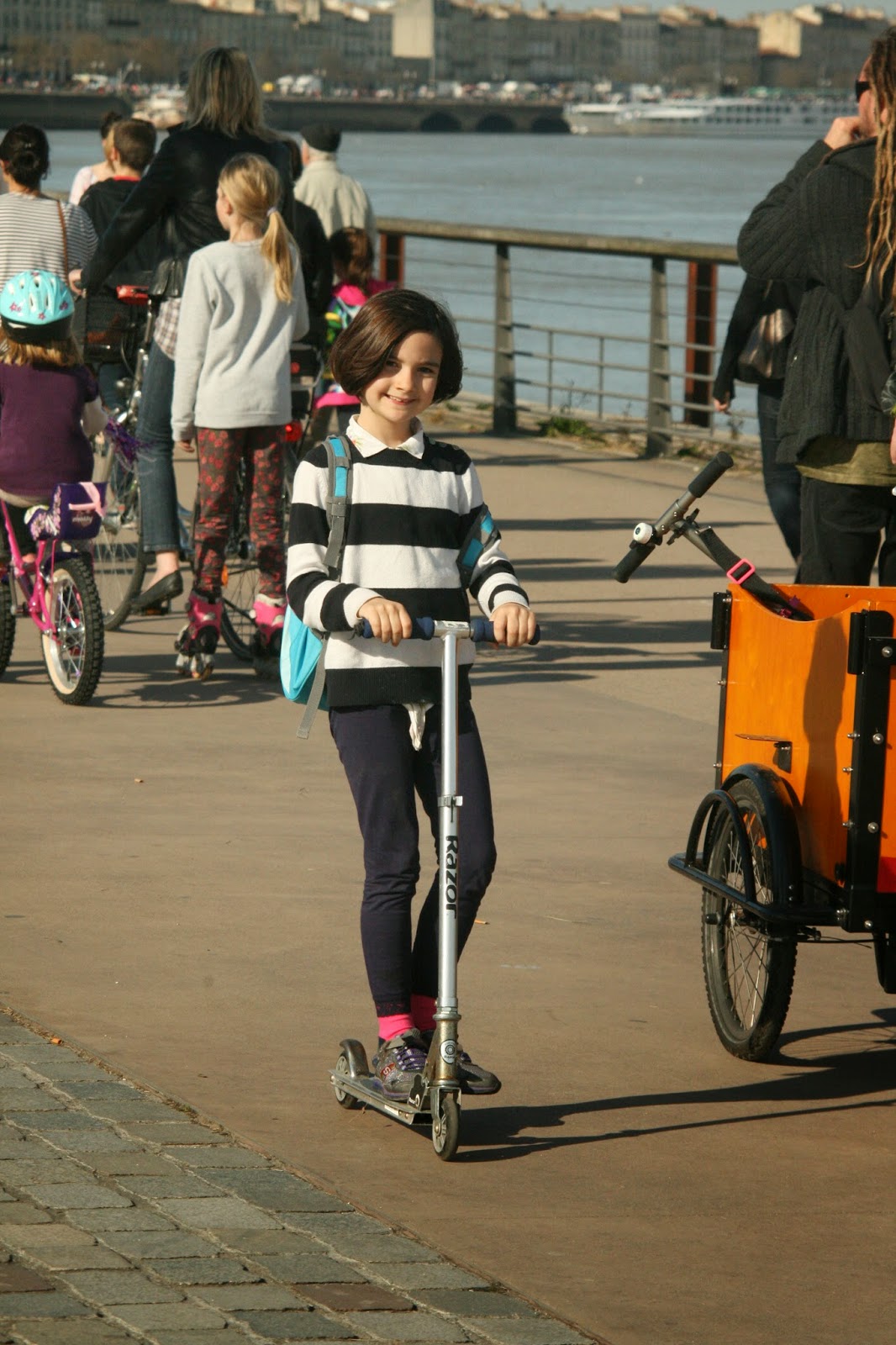 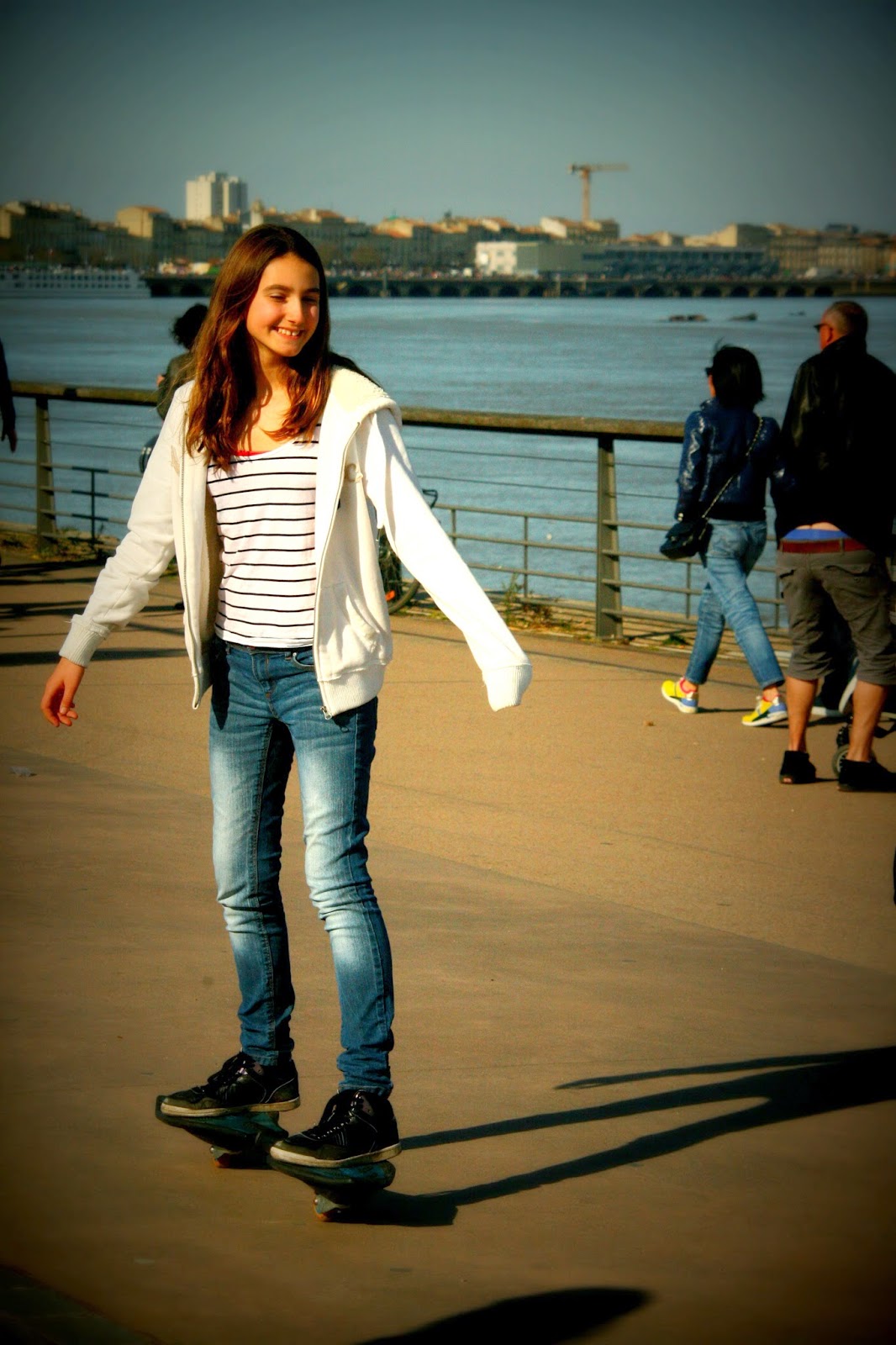 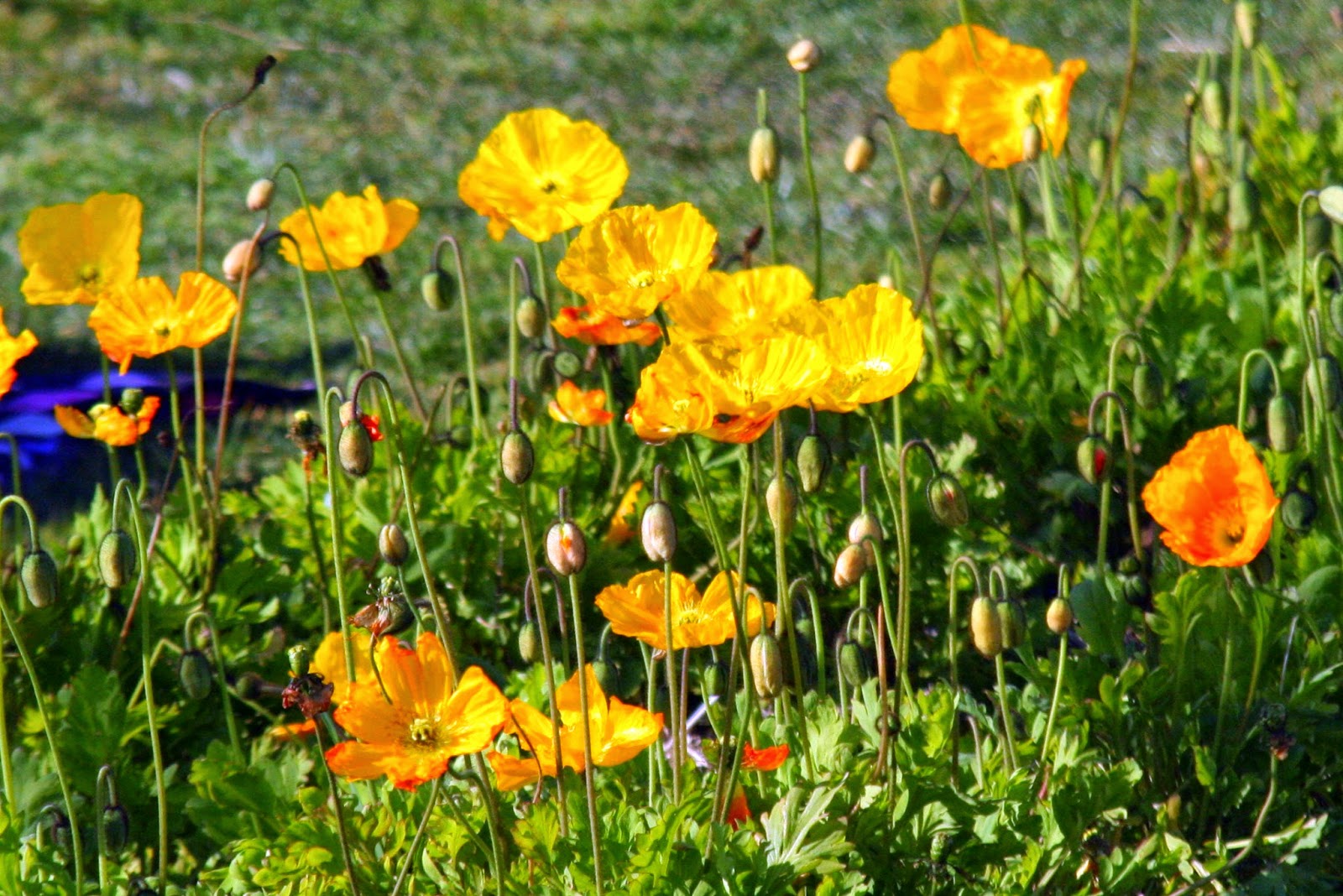 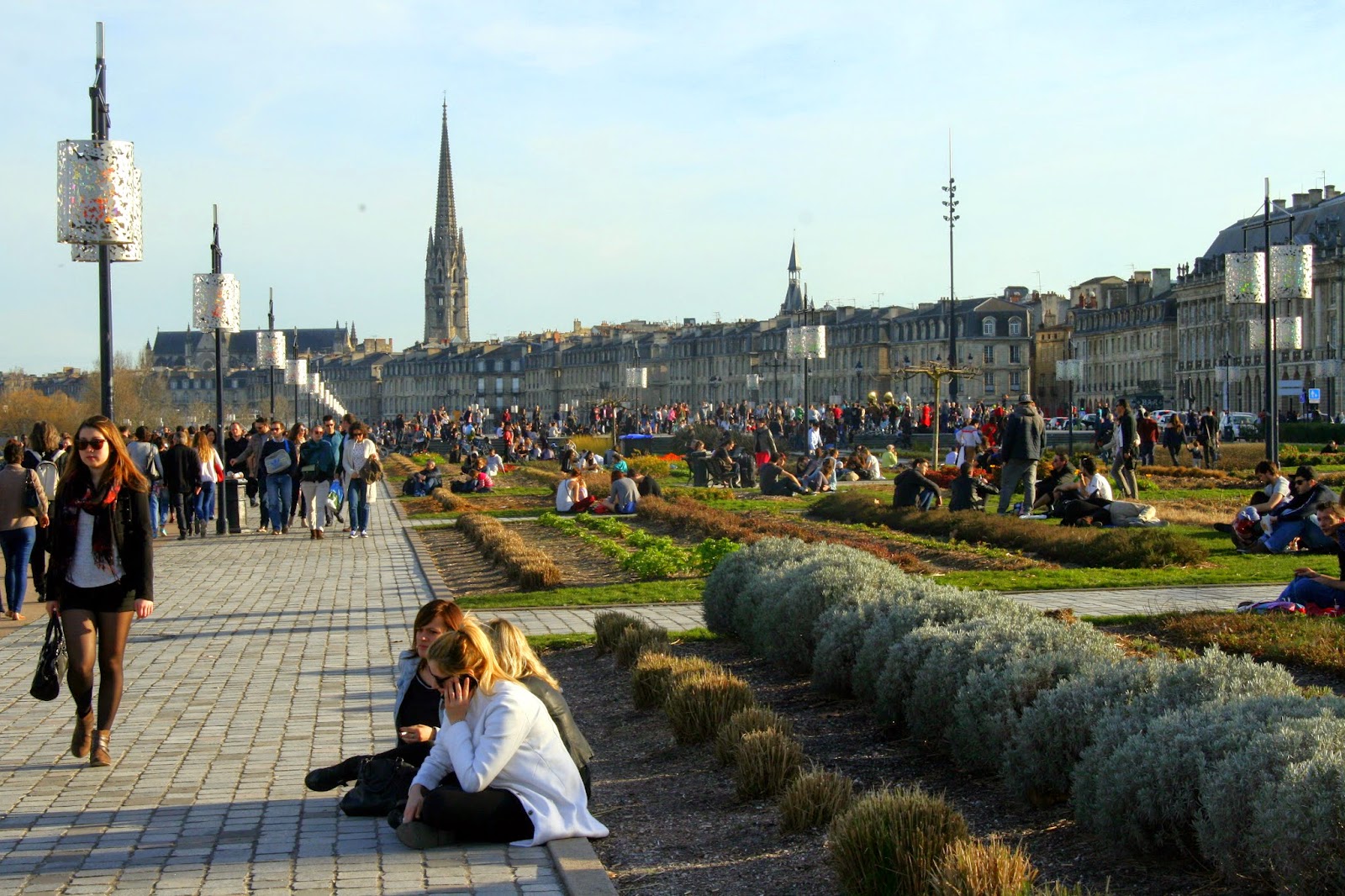 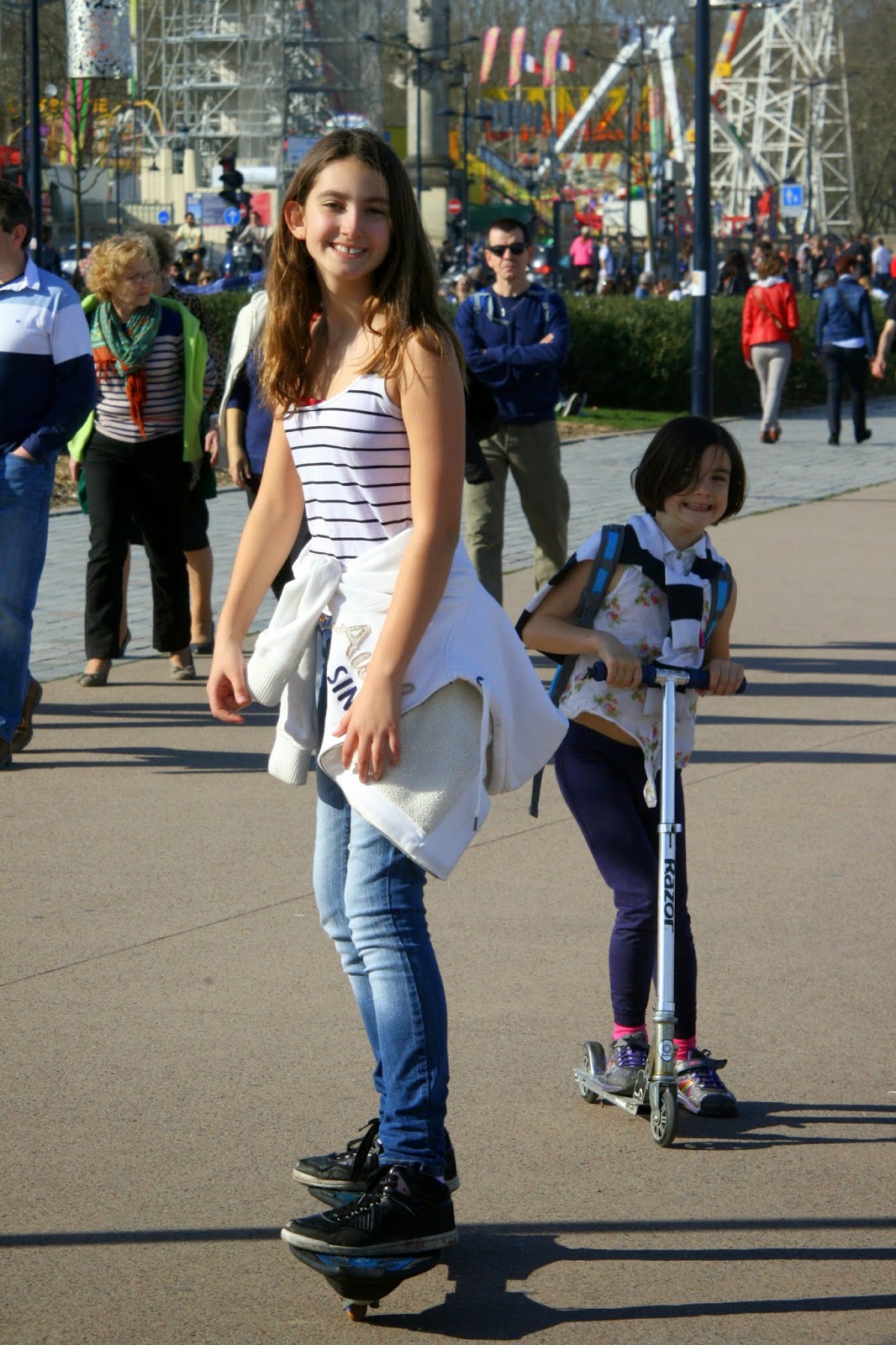 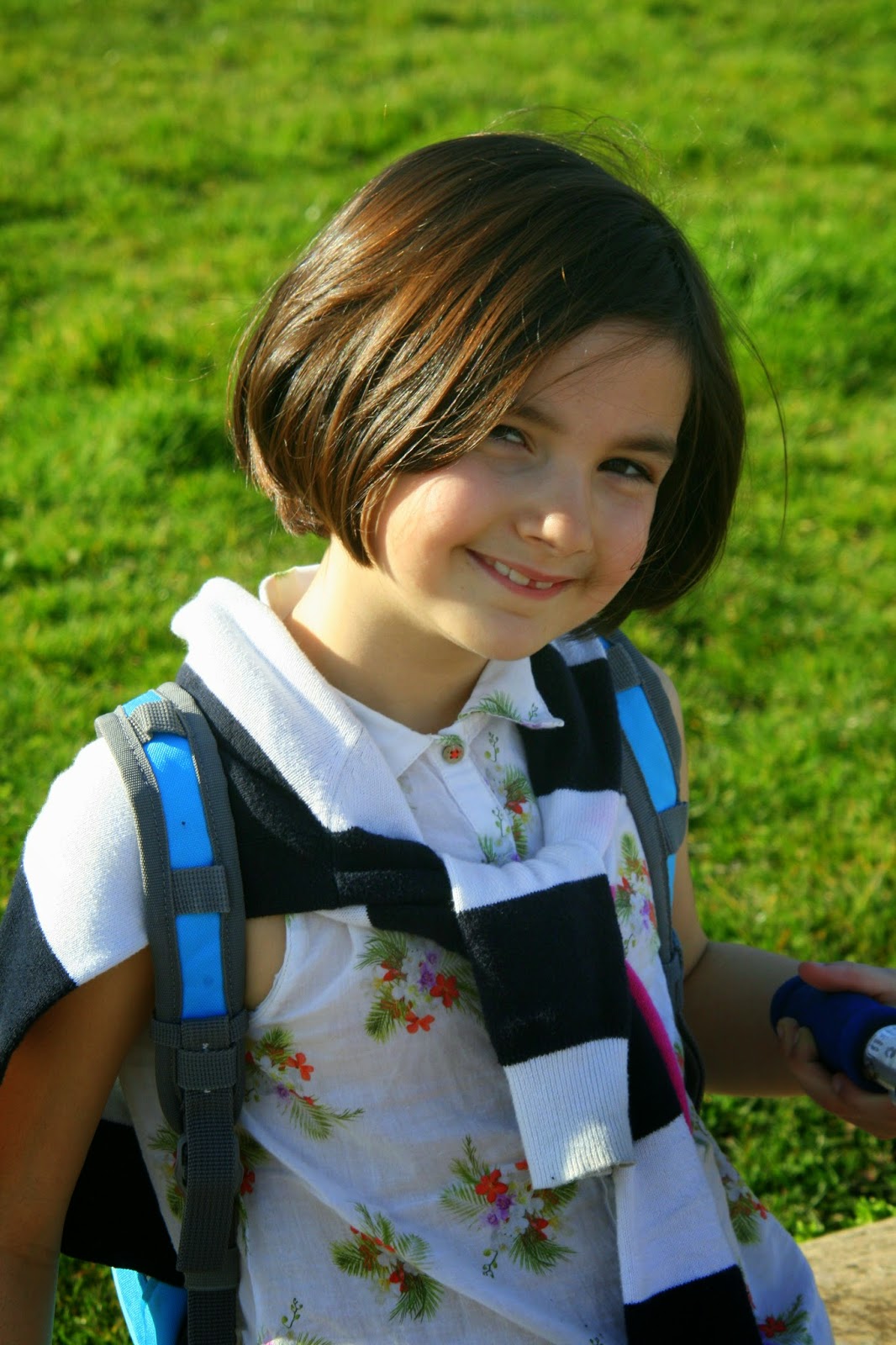 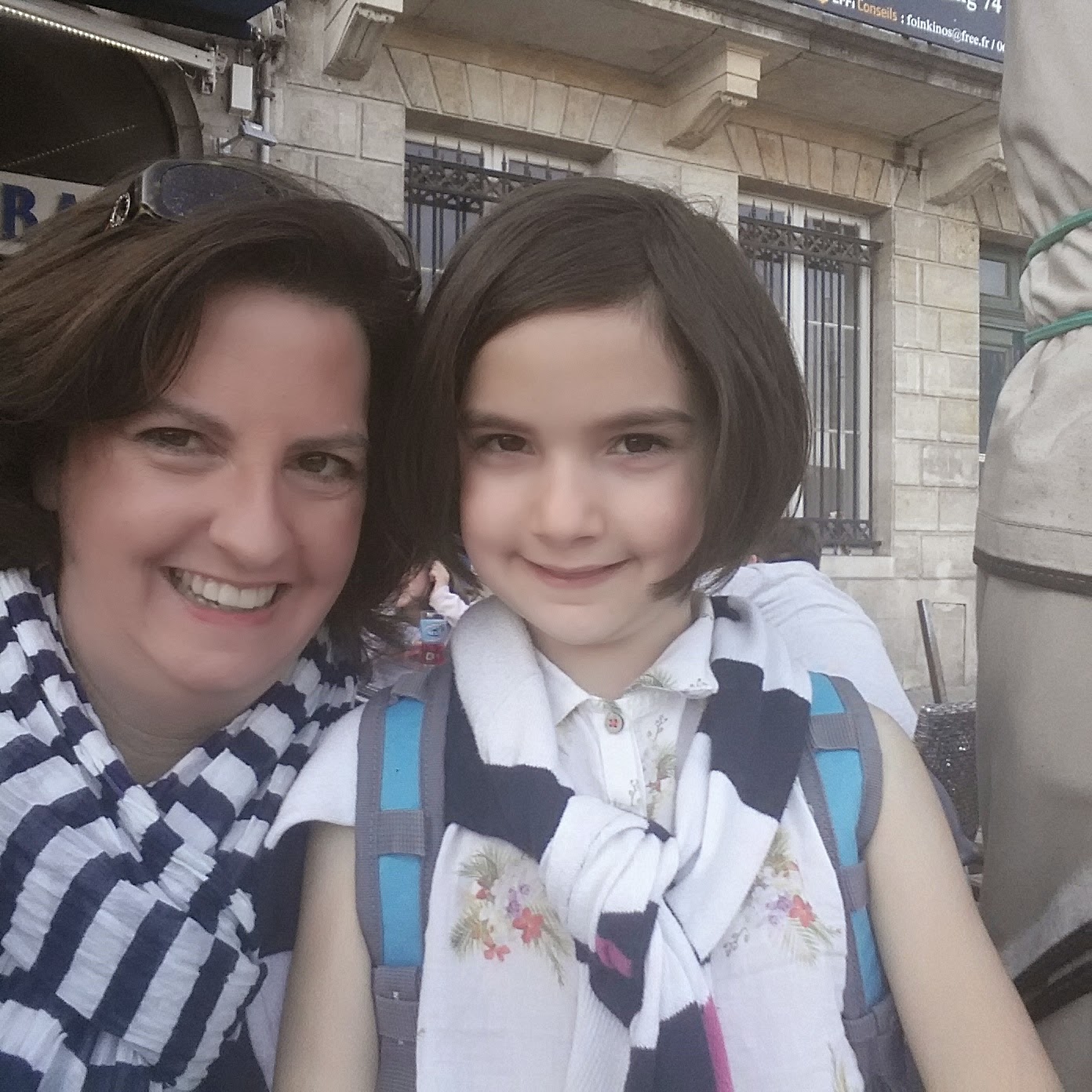 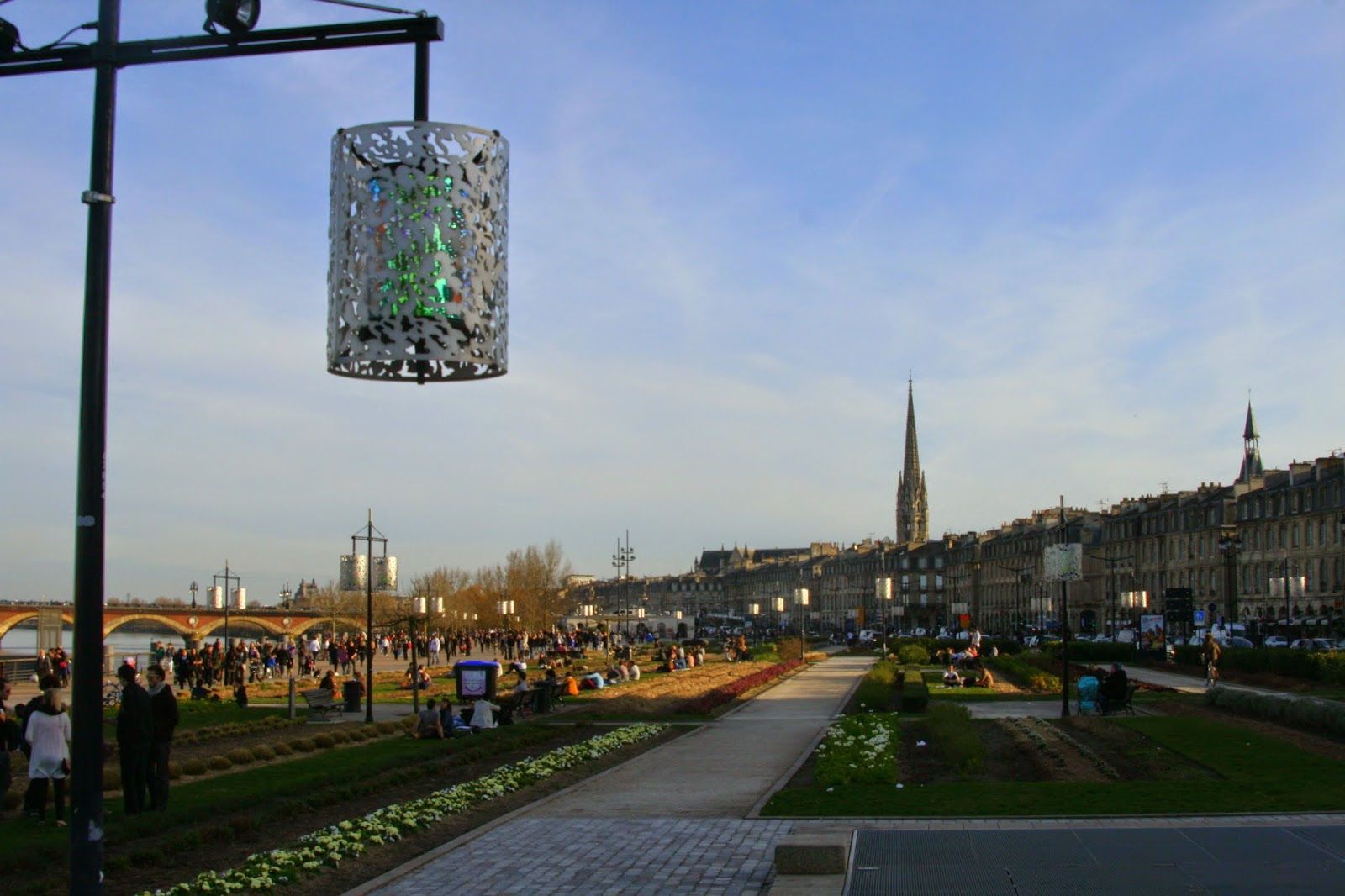 I can't believe it's almost the end of March.  Time flies by when you are having fun!  Walking, riding, skating, scootering, jogging  - you see it all here along the river.  It's one of the special parts of this city.  Watching the city come to life after the dormant of Winter is special.  I hope by sharing some of the colors and warmth of Spring - it will warm hearts and remind even those of you who are still stuck in the grasp of Winter - that Spring and warmer temps are on their way.  Happy Spring everyone! 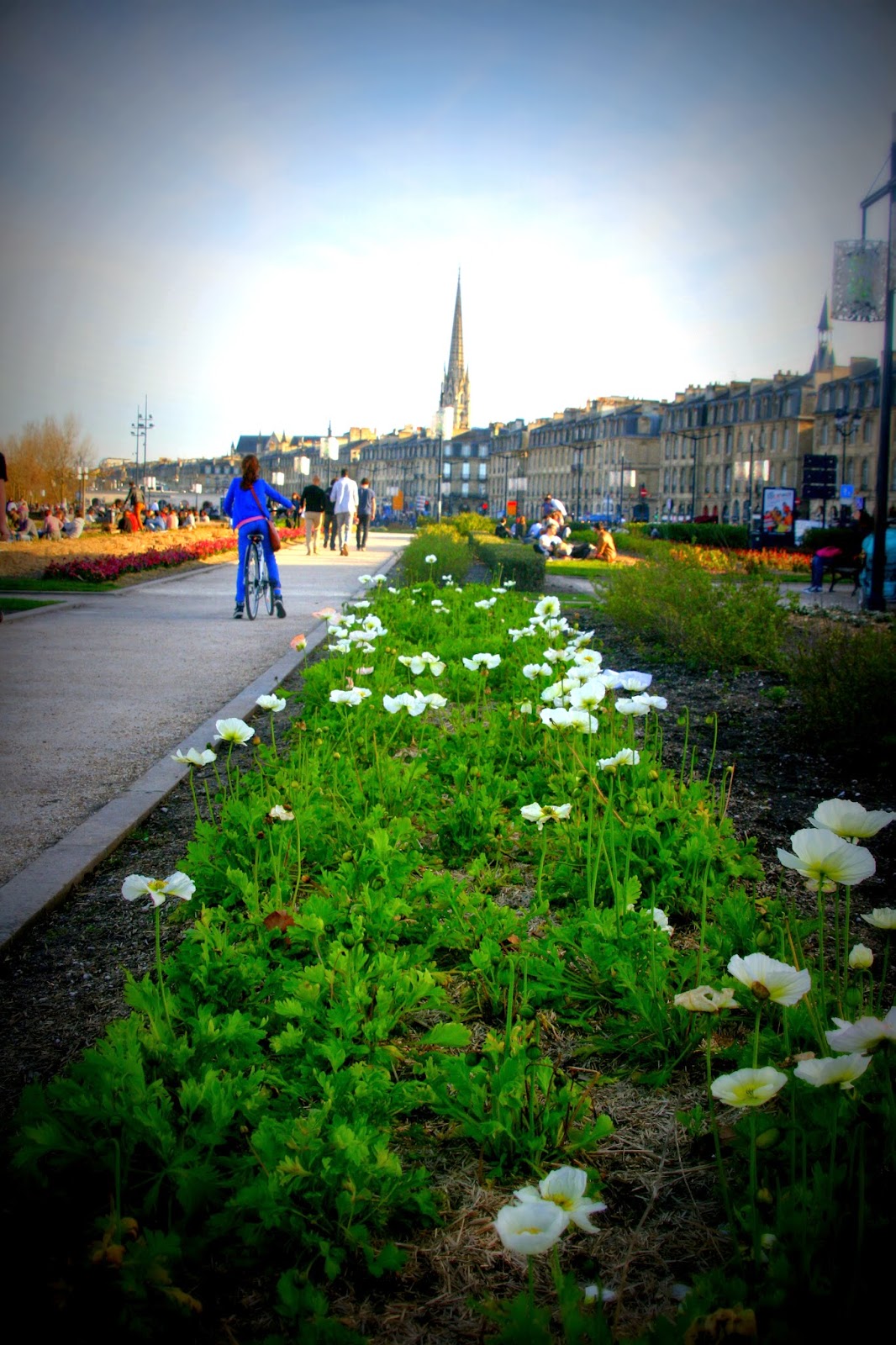 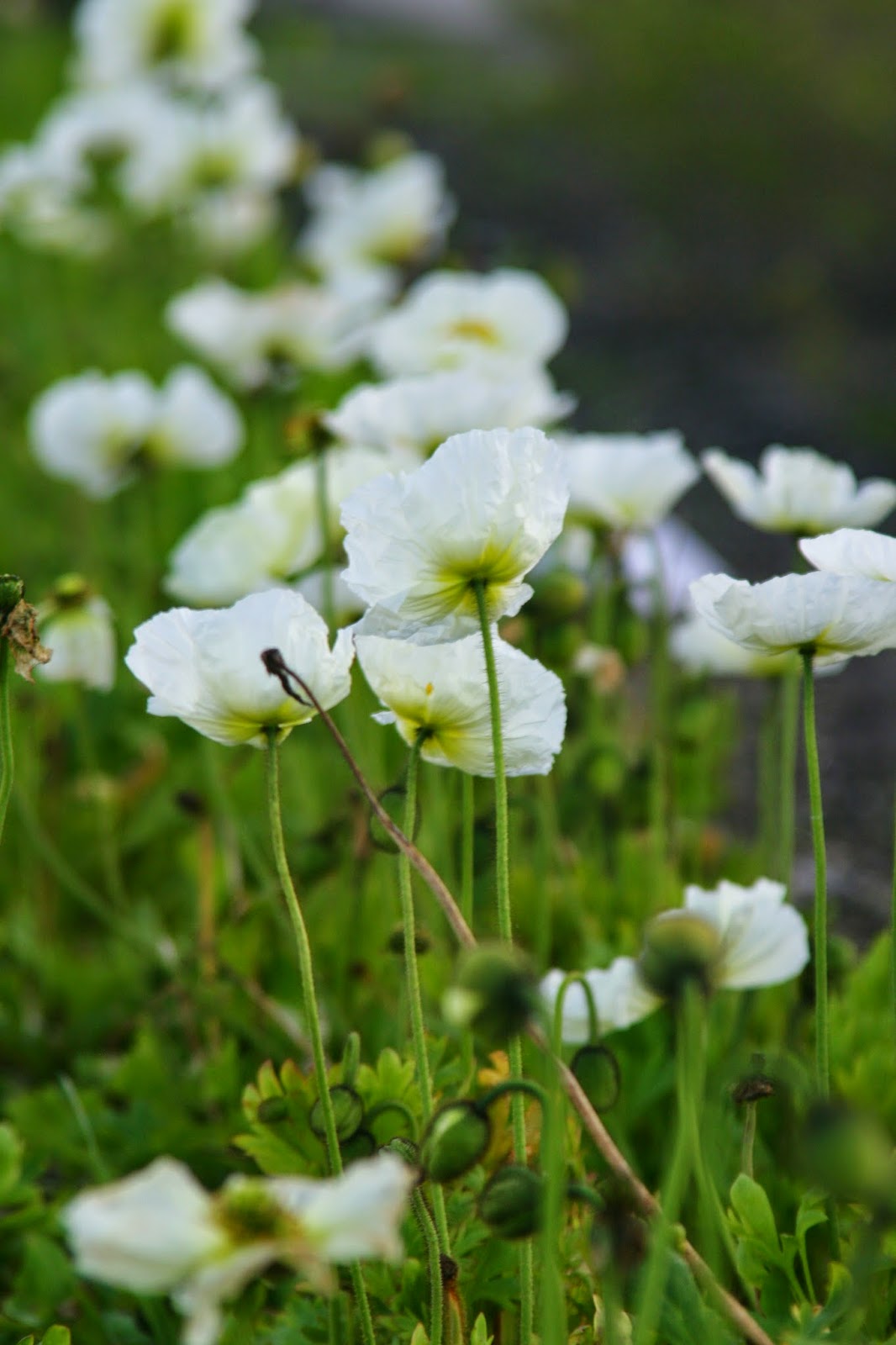 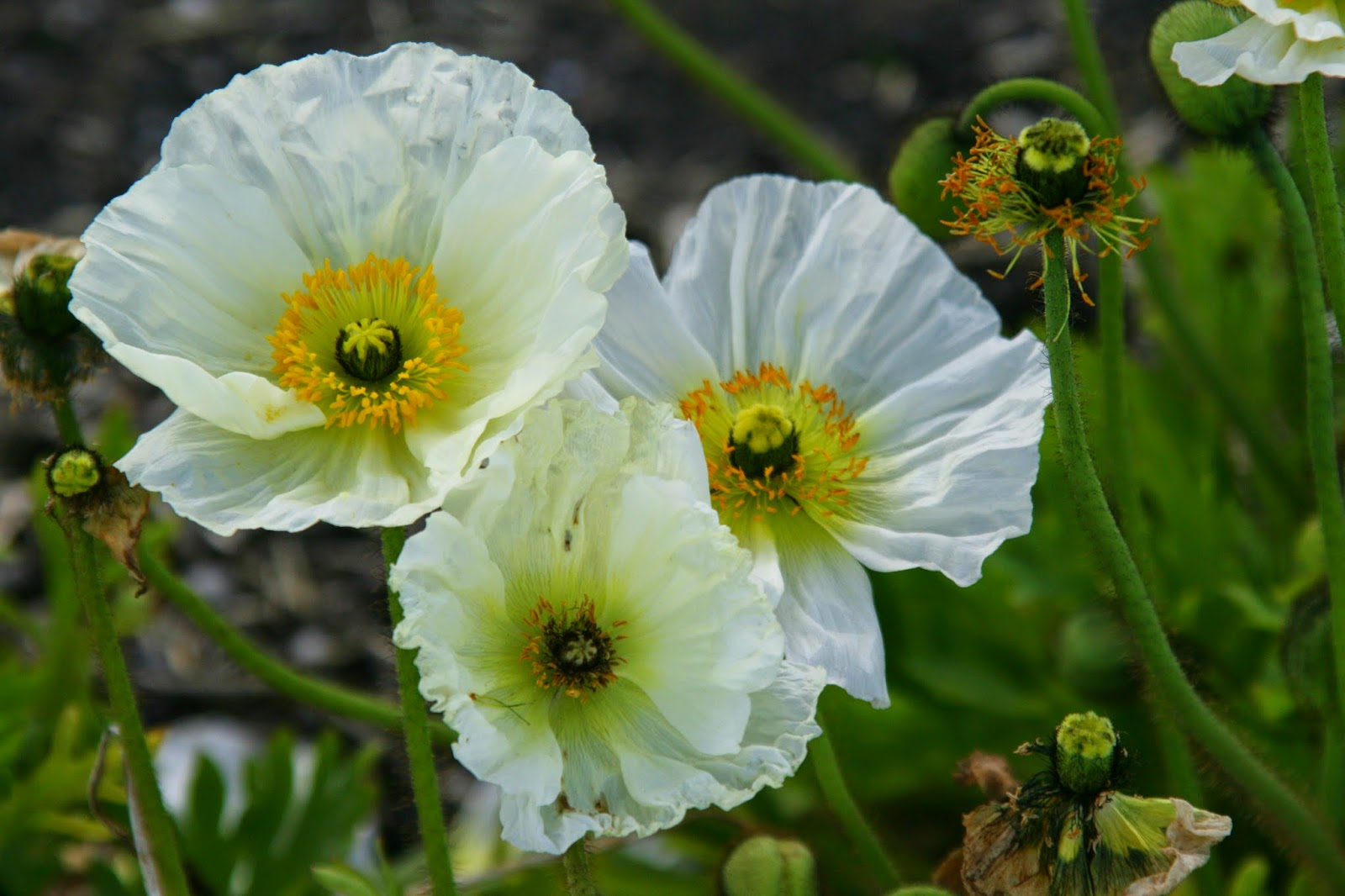 This weekend - I'm looking forward to enjoying the Portes Ouvertes in the Medoc.  It's when many Chateaux open their doors for visits and tastings.  A fun way to enjoy and compare the different wines in that area.

Happy Weekend Everyone!!  Hope your will be fun!

Posted by American Mom in Bordeaux at 4:19 PM 5 comments:

Growth in Bordeaux - What's next for The Bordeaux-Merignac Airport 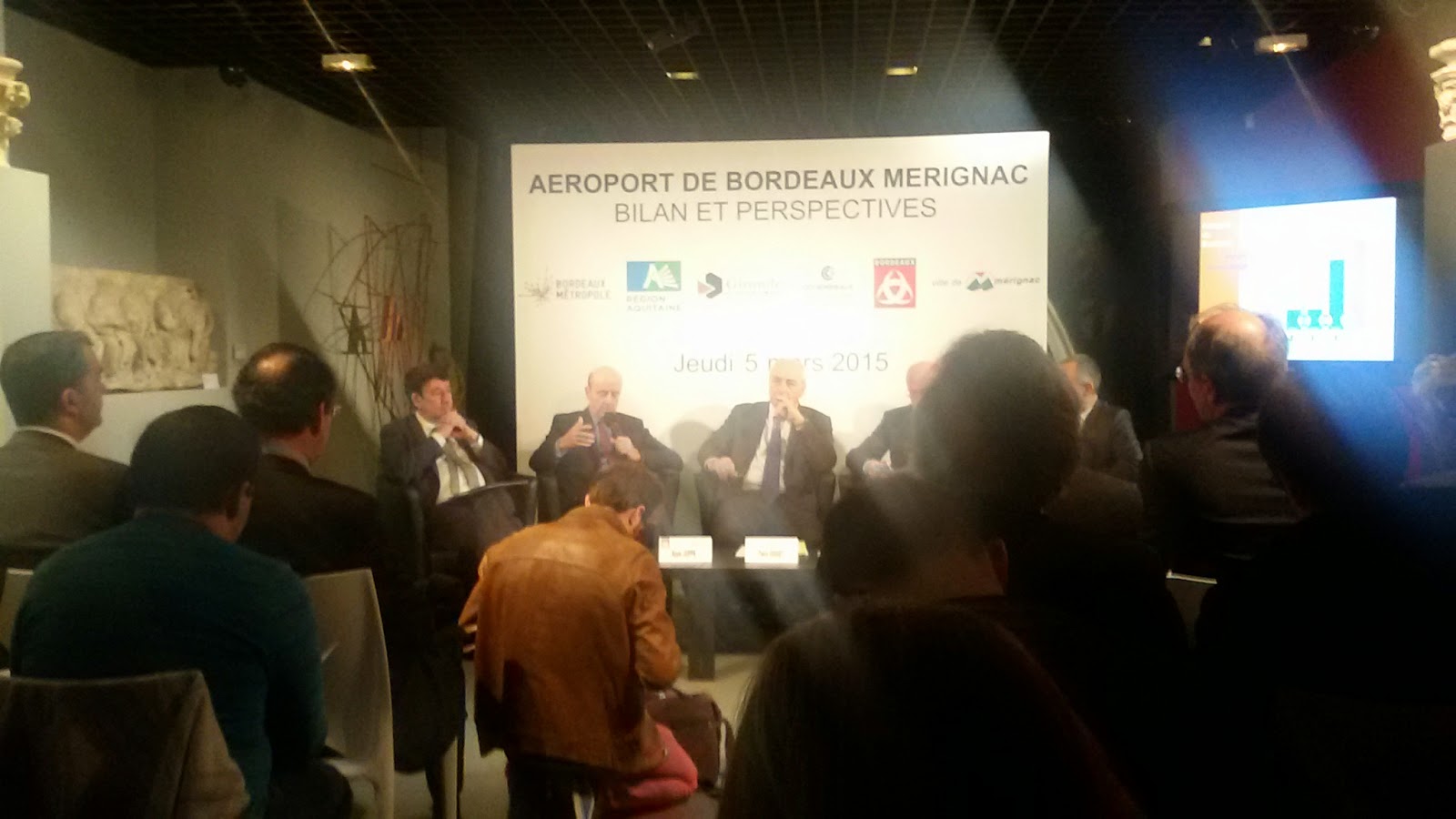 Writing this blog has provided many interesting opportunities for me in the past year.  It still surprises me time and time again - but it's also been a great way to become more familiar with Bordeaux itself, its agencies, its government and its future vision.

A few days ago, I was invited to a press conference which discussed the growth and future plans of the Bordeaux-Merignac airport.  Now initially, my thought was - this may not seem too related to this blog - but I decided to attend mainly to understand more about this city and how it functions.

Knowing that this city is constantly growing and especially in the realms of tourism and economic growth - I thought it might be interesting to hear more.   I was pleasantly surprised and enlightened to hear a different perspective and its for this reason that I thought it would be fun to share both facts about the airport and this area's vision for it's future.

A few facts about the Bordeaux airport* first:

Bordeaux is the fastest growing airport in France - showing a 7.3% growth rate since 2009.  (The average growth of airports in France is 1.8% and  airports of  European cities 5.0%).

Bordeaux is truly considered an international airport with more than 3 million passengers arriving.This number has doubled in the last 5 years.

Adding more low cost flights into Bordeaux has also increased..showing a 25% growth since 2009.

The Bordeaux airport serves both civil and military purposes...with an air base located at the airport, along with several aviation sector companies.

Based on an impact study in 2015, there is continued potential for economic growth of this area in addition to the growth of tourism.  A few interesting facts to note - 46% of passengers are visiting this area for vacation - another 24% to visit family and friends and almost 25% arriving for business purposes.

So what does all of this mean? Why a press conference?  With all of this growth and continued vision of growth - there is concern that the Bordeaux airport could become the object of privatisation.  With the state of France struggling economically, there is  concern that an International company or another country might be interested in purchasing shares in the airport management company.  This happened at the Toulouse airport where a Chinese investor was able to hold a majority of stakes.  This is also the model of many US airports who are co-owned by public-private partnerships.  This privatization over the past years in the US has helped struggling state and federal budgets, but at the same time has moved the control away from State and local entities into the hands of private companies and their own agendas.

But in France - especially here in Bordeaux - there is a pride - a love in wanting to be able to take care of itself.  Wanting to keep things local - local ownership, local management and a continuation of a vision that started right here at the town, city and local level.  After all, who knows Bordeaux best - but its locals who have lived here and have created something very special with this beautiful city.

So the 5 major regional shareholders of the Bordeaux-Merignac airport (The Bordeaux CCI, Bordeaux Metropolis, The Regional Council of Aquitaine-General Council, and the Cities of Bordeaux & Merignac) announced their Will to join forces to become the majority stake holders in the Management company of the airport. This request has been put forward in a formal letter to Manual Valls, Prime minister of France, stating their desire to acquire more than 10% from the State-owned 60% share.  No further discussions between the State and these shareholders has happened at this point.  This was just an announcement of their intentions.

By pooling financial resources from all 5 of the regional shareholders, this is a creative way to maintain local control and avoid privatization from an individual or outside investor.  Definitely a unique way to keep control localized and keep the vision moving forward.

So I will be interested to follow along in the next few months to see what's next for our international airport.  From an American perspective, this solution is very creative and I venture to say unique for even the French...who unfortunately get stereotyped to be "in the box" thinkers.

So as an expat, I find it interesting to see different solutions for some common global economic problems.


Posted by American Mom in Bordeaux at 1:05 PM No comments: