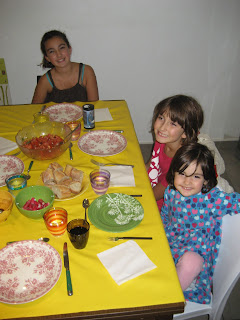 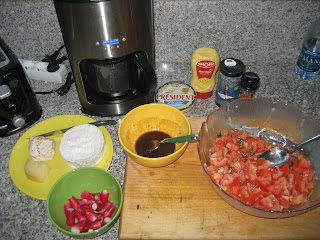 Socializing is often done over sharing food together

Back in February when Pamela Druckerman's book, "Bringing up Bebe" was released it was interesting to hear about the reaction this generated in the States.  I was intrigued to read about her perspective, especially now that I was living in France.  I have to first say, I have not read the book yet, but I did read the article in the Wall Street Journal summarizing her book and annotating some of her points.  After I read this article, it got me thinking...Is American parenting really different than French parenting or was it more a generational difference?...Are her points accurate even where I'm living in southern France as opposed to Paris?  What did French women think about American parenting?  Did it interest them?

Now, I've only been here 4 months and I'm just beginning to create a circle of friends - but I did ask some of my French friends who have lived in the States how they compared French parenting to American parenting.  Not surprisingly, I got many different opinions and points of view.  Most agreed that French parents are stricter than American parents starting from when the child is very young.  Others pointed out that all French children go to school earlier than American children, starting at age 3.  Another friend also felt that now that the majority of French women are working full time (as opposed to even 10 years ago) that things are beginning to change slightly.  One of my friends generalized French versus American parenting as the French are focused on the child's well being, while Americans today focus more on a child's wishes & desires.  This is not to say American parents don't care about a child's well being - her point was that she felt Americans focus too much on the child's opinion and wishes.  Alternatively, French parents may take into account children's wishes, but there are clearly some decisions that are non-negotiable and made only by adults.

One of the big cultural differences that I see is that meals in France are social times for all - meal time is sacred and lasts longer than American meals.  Social meaning sitting at a dinner table talking and enjoying each others company.  A typical French meal is 3-4 courses (beginning with the entree (or appetizer), the main dish, a cheese course and finally dessert) - this most families serve nightly.  Nightly meals are not as long as meals with company, but it's the time to catch up on the news of the day from each family member.  French families still routinely have family dinner in the evenings.  Since the meals are served in courses, it naturally takes 45 minutes to an hour to eat and complete a meal.  French children learn from a very early age that this is the norm, this is the expectation.  Sitting at the table-talking is just what is expected.  Yes, when children are babies and young toddlers, they are not expected to join at the family dinner table, but once they are 2.5 to 3 years old they are eased into the ritual.  All of this being said, children do learn to sit longer at the table, be a part of the family conversation and do what adults do.  They start young and it continues through adulthood.

Meals and eating are so much a part of the French lifestyle that even teenagers get together over meals to socialize and hang out.  I actually remember when I was 16 years old and was an exchange student one summer in Northern France that a bunch of us (16-18 year old) got together at some one's house and each brought part of the meal.  We talked, hung out and socialized all around the dinner table. I remember finding this interesting as none of my teenage friends in the States would even dream of doing a potluck dinner at that age.   I need to add one more point about family dinner in France - classes for children's activities  (i.e. dance, gymnastics, sports) are generally not scheduled to last past 7:30 pm at night and Sundays are also free of activities.  Again this culture encourages and promotes family dinner and meal time by not having activities that conflict with meal-time.

Another point that is different culturally here is that French Preschool is public and free.  Beginning at the age of 3 years old, French children go to school for the whole day.  There is a 2 hour break during the noon-time hour and parents can choose to bring their children home for lunch and a short rest-time or the children  stay at school during that time.  Again, comparing this to Preschools in the States which are mostly half day programs and/or only a few days a week.  Again, this leads to the majority of French children learning to not only socialize with other children, but learn to take turns, share and have to wait for the teacher's attention.  Patience and learning to wait is learned very early on by most all children here in France.  Now, as an American mother who worked full-time, my children were in daycare from the age of 6 months, and I know this applies to many other American children, but since daycare options range from home-care to daycare/preschool  centers, all kids are getting different experiences and while some learn to be patient and wait, others get lots of individualize attention from nannies and grandparents.  My point here is really that the norm in France is that beginning at age 3, ALL children go to school and share similar experiences in classroom structure and expectations of behavior.

When I was speaking to some of my French friends who all lived in the States at various times, they all felt American children were given too many choices and options.  There is a strong sense that American parents undermine their own authority by giving their children too much say in matters and decisions.  However, other French friends of mine feel that parenting in France is changing...they see younger friends who have children not having as much control over their children's behavior.  They also see younger French children acting out more and  talking back to their parents - similar to what American children are described to do.  This may be a function of more and more French women working  - France has the highest rate of working mothers of any European country.  This change could also be French parents, like American parents looking at different parenting styles and trying to find what works for their individual family - wanting to do things differently than how they were brought up.

All of this really comes down to different parenting styles and all parents no matter what nationality needing to feel comfortable with how they parent and feeling they are achieving their desired outcome in their child's upbringing.  I do think there are some interesting aspects to French parenting that may help children listen better and behavior differently, but at the same time, the French culture also supports these strategies.   So, now that Pamela Druckerman's book has been out on the shelves for over a month and more people have read it, I'd be interested to know how many American parents are trying any of these French strategies or if they feel they would only work in France?  I would also be interested in revisiting this discussion in another 10 years - would French parenting look the same or different?  This has been an interesting topic to discuss with French women and I look forward to learning more about the French culture from the parent perspective as I live here longer. 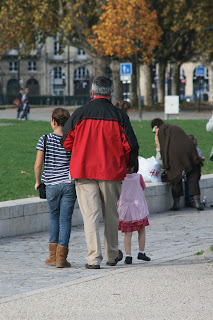 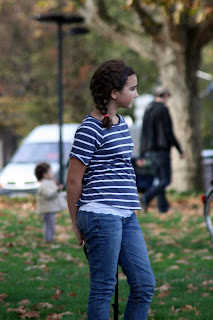 Posted by American Mom in Bordeaux at 10:26 PM