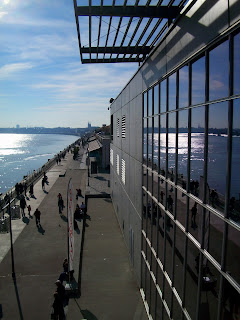 Cap Science - Bordeaux
This afternoon the kids and I had fun at Cap Science - The Science museum here in Bordeaux.  During February break I had learned that, in addition to their regular exhibits, they offer various workshops for kids of all ages.  Of course, by the time I figured this out, and realized I needed to make reservations for the workshops, and then got up the nerve to call myself to sign the kids up...(keep in mind, I am proficient in French - but phone conversations are not my forte...let alone understanding the system here.).  Turned out all the workshops during break were full - lesson learned - sign up early for vacation times.  So, I picked a Wednesday afternoon and signed them up.

My oldest (11) took what they called Cap Science Juniors -  a workshop from 2-5 pm where she learned all about the photography process.  During this 3 hour workshop, she learned about the traditional techniques of photography.  They made a dark chamber, took a few photos, then completed the process of developed and exposure of  their own photo.  She had a lot of fun.and loved the photos she created..and they even provided them with a snack part way through the workshop! What is so great about this program is that they rotate different topics each week - Robotics, Chemistry, Environmental Chemistry, Electricity, Astronomy just to name a few...I'm sure she'll want to go back and explore a few other topics!  They limit the class size, so I've now learned to sign up way in advance. 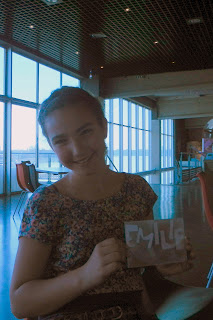 My middle daughter participated in a cooking workshop - called L'Atelier d'Arthur.  Cute name for a kids cooking class.  These are designed for budding cooks - 6-11 years old to learn how to cook in a kitchen as a group.  There was attention to hygiene, proper measurement, and cooking techniques.  This was totally hands-on!  My daughter was thrilled to be able to beat up egg whites with an electric hand mixer!!  This week, they were making chocolate moose, which of course they got to enjoy at the end of the hour long time! She was lucky also - as they limit the group size, but only 2 kids had signed up today - so it was like a semi-private cooking lesson.  I also liked that they not only rotate different recipes each week but also the levels and age groups.  Other recipes that look interesting to me are pear tarts, spice cookies, snail canapes (we are in France), and Madelines (French biscuits).  I know she'll want to go back also!

My 4 year old also did the Little Explorers Workshop.  This was adorable and perfect for the 3-5 year olds!  The following is a translation from the description of the workshop - I found it so cute - I just needed to quote it:

Are you adventurous? Come discover our island and its mysteries.
This is the start of an exploration where you are going through very different places. In the dark glade,you will listen to explore. You'll hear the cries of animals you do not see .Approach to discover them yourself! At the rock, there are hiding places,  for your hand to slip through the cracks to touch new material. Facing the sea in the distance watching with your telescope, you will discover what is on the horizon. Your flashlight beam will pierce the darkness of the mysterious cave. Between sea and forest, in rocks under the sand, in the heart of trees, you will discovered a hidden world. Later on you will become a little explorer ScienceThis hour long workshop held my 4 year old's attention and she loved all the exploring.  They even discovered animal footprints and then at the end identified them with a book.  This was all set up inside the museum and with lots of hands-on fun.  The guide walked them through different discoveries and kept them on task.  I didn't get to see everything - parents were invited to either stay or go...but most parents left their children.  I know my daughter often does better when I'm not around.  For me it was fun, just to sit and have a drink and know my girls were all having a fun!


Have to say, this was a really fun afternoon!  It was a great place and fun for all ages.  The rest of the exhibits were really fun also - the math manipulatives in the Math exhibition were cool and great to play around with.  This exhibit has been there for a few months - but I thought it was interesting that we were there on Pii Day.  The kids also enjoyed the Grandes & Petites Emotions (small & large emotions) exhibit. There was also a bridge exhibit and another exhibit on research.  All well done and quite interesting. Even though all the workshops and exhibits were in French -  all of the guides seemed to also speak English -and were comfortable speaking it if they needed too (that was a plus for my mother who doesn't speak much French).    I also have to add - from the American point of view - this museum was so reasonable in cost.  I am finding that many of the children's activities here in Bordeaux are not that expensive and many times much cheaper than I would pay for something similar in the States.  Just another observation.  Looking forward to finding more great places in Bordeaux!
Posted by American Mom in Bordeaux at 12:40 AM