We are still waiting for the weather to really welcome summer here...It's lovely but not really beach weather yet and definitely unpredictable.  This has limited some of our plans..but bike rides, exploring new places and walks are taking priority.  As one of my French friends said the other day, "It's nice to have the weather of October break in July, much more exotic and original than a heat wave".  Right now, my littlest one is down and out with a little virus that got passed around her school...(and school is even out...go figure!).  So in thinking about warm, sunnier times, I wanted to share photos of a place near us - Sanguinet and Lake Cazaux.  We spent 3 days there last summer and an afternoon on Lake Cazaux this Spring.  My 2 oldest daughters will be returning to Sanguinet next week to attend a sailing camp.  It's just a fun place and great for outdoor family activities.

Sanguinet is located just South of Arcachon, slightly inland on the Atlantic Coast.  There one discovers the calm waters of the large Lakes and the magnificent pine forests. Sanguinet, a small forest village of over 3000 inhabitants, is located in the heart of the largest pine forest in Europe, on the shores of Lake Cazaux.

This place is a vacation land of beaches, bike paths, wooded walks and just lots of fun.  The village of Sanguinet is quaint and boasts a wonderful market on Saturday mornings.  In the summer they also host a "village dinner and ball" weekly.  This is where they offer dinners in the town square and then have a DJ or band for dancing beginning around 10 pm.  We went last summer and had a blast!

Lac Cazaux or "Lake Cazaux" is just 10 miles south of the Bassin d'Arcachon, which it is connected by a canal, the lake of Cazaux is the second largest freshwater lake in the heart of France This forested niche is protected from winds, and houses exuberant nature, on nearly 5,500 acres, enough to satisfy all the dreams of the exotic.

Highly valued for its sandy beaches, its many coves, pristine waters and calm, this lake is a paradise for swimming families. Parents will find it a safe bathing place for their children because in many places along the shoreline there is several hundred meters of shallow water. The sailing is also very popular there and Fishermen flock to this place for its enchanting finds; they find pike, zander, perch, carp, etc.. either in its channel, or in some creeks or these fish like to spawn in the reeds and shallow waters.  Cazaux Lake  was formed by the accumulation of water from a deep source of the Massif Central, which feeds the lake permanently.  An ancient Gallo-Roman town existed there before disappearing under the water when the entrance to the ocean got closed off due to the shifting sands.

The other side of the lake - At the beach near Cazaux.  The following pictures were taken on a very hot afternoon in March....yes, I said March.  I'm hoping for more weather like that now!  So here's to hoping! 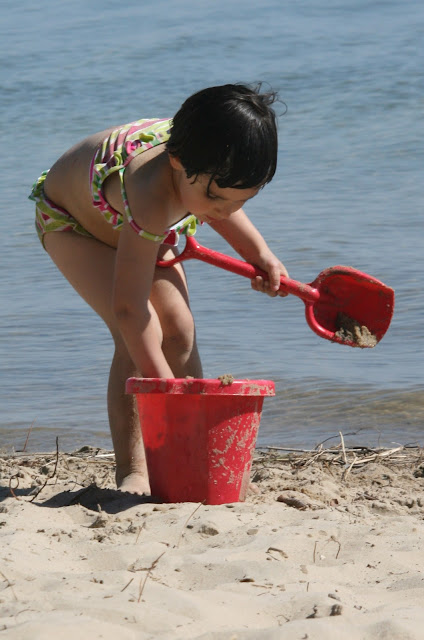 Such beautiful fine soft sand and calm waters!  I love it there.  Just writing this post reminds me of all of our fun there!


Posted by American Mom in Bordeaux at 4:26 PM