Thanksgiving in France -
Celebrating as an Expat
The day of Thanksgiving is a very special day for me.  Yes, being an American this day has always been full of family, memories and lots of fun with cousins.  I grew up with Thanksgiving always being held at my parents house - filled with aunts, uncles and cousins.  The group changed over the years - as we all grew up and had our own families - but the tradition still remained.  My parents hosted Thanksgiving and my brothers and I would return home with our own families.  We use to joke about an adult table and a "kids" table.  For my girls, Thanksgiving memories in the States have always been a weekend full of cousins and activities and of course the big family feast.  Interesting enough, the children were all getting old enough to have their own "kids" table while adults enjoyed eating together. Family is very important to us and traditions have taken on a whole new dimension since moving to France. This weekend was bittersweet for that reason.  My girls often spoke this weekend of their cousins and how much fun they always had together those Thanksgiving weekends. How much they miss seeing them for this holiday.

Thanksgiving is not a French holiday - it is truly only an American holiday symbolizing that First Thanksgiving so many years ago between the Pilgrims and the American Indians.  It is a holiday that is not really understood by many French in France.  They have heard of it but really don't know much about it or why it is celebrated.  One of the most special things that happened to me this year was I was invited by my youngest daughter's CP (1st grade) teacher to come in and share about Thanksgiving.  Now this activity excited me but was also daunting.  It marked the first time I was to do a presentation in French.  I have no problem speaking to groups in English - but French...that's another story. My French is proficient and fairly fluent but I of course, speak with an American accent.  I know also that my grammar or pronunciation of certain words may not be correct, but for the most part my friends here have always been encouraging and understanding.  But here was my chance to not only share about our very special American holiday but to get a bird's eye view of my daughter's classroom and classmates.

I decided to not only tell them the story of Thanksgiving and what it has come to mean for Americans present day but to also do a quick craft with the class.  One of the things that is nice about our school in France is that the children are also learning English.  I decided on a "Gratitude wreath" where the kids could choose words in English or French that represented the Thanksgiving Holiday.


I was definitely a bit nervous as I spoke to the class.  I'm sure my French wasn't the greatest - but my daughter's teacher was a delight and helped me out when I needed it.  I kept things simple, but it was fun to give them a quick history lesson.  The teacher also checked in with the kids to make sure they understood the concept that I was sharing.  I shared the history, what it symbolizes today and our traditional foods for the meal.

The kids then generated words that related to this holiday. They of course gave French words, the teacher asked that we also include English words.  The kids then chose the words they wanted and wrote them on their wreath.  As they were finishing their wreaths, I served them some pumpkin pie.

Pumpkin pie is also not known to the French.  Yes, they have pumpkins, and various versions of squash similar to pumpkin - but to make it into a pie - that's a surprise.  Amazingly, most all the kids tried it and liked it.  One of my favorite moments was one student who came to me at the end and asked "Is it okay that I didn't like the pie?"  I answered "of course, it was okay that she didn't like it, and thanked her for trying it."  Her reply , "Well, I ate almost all of it!". 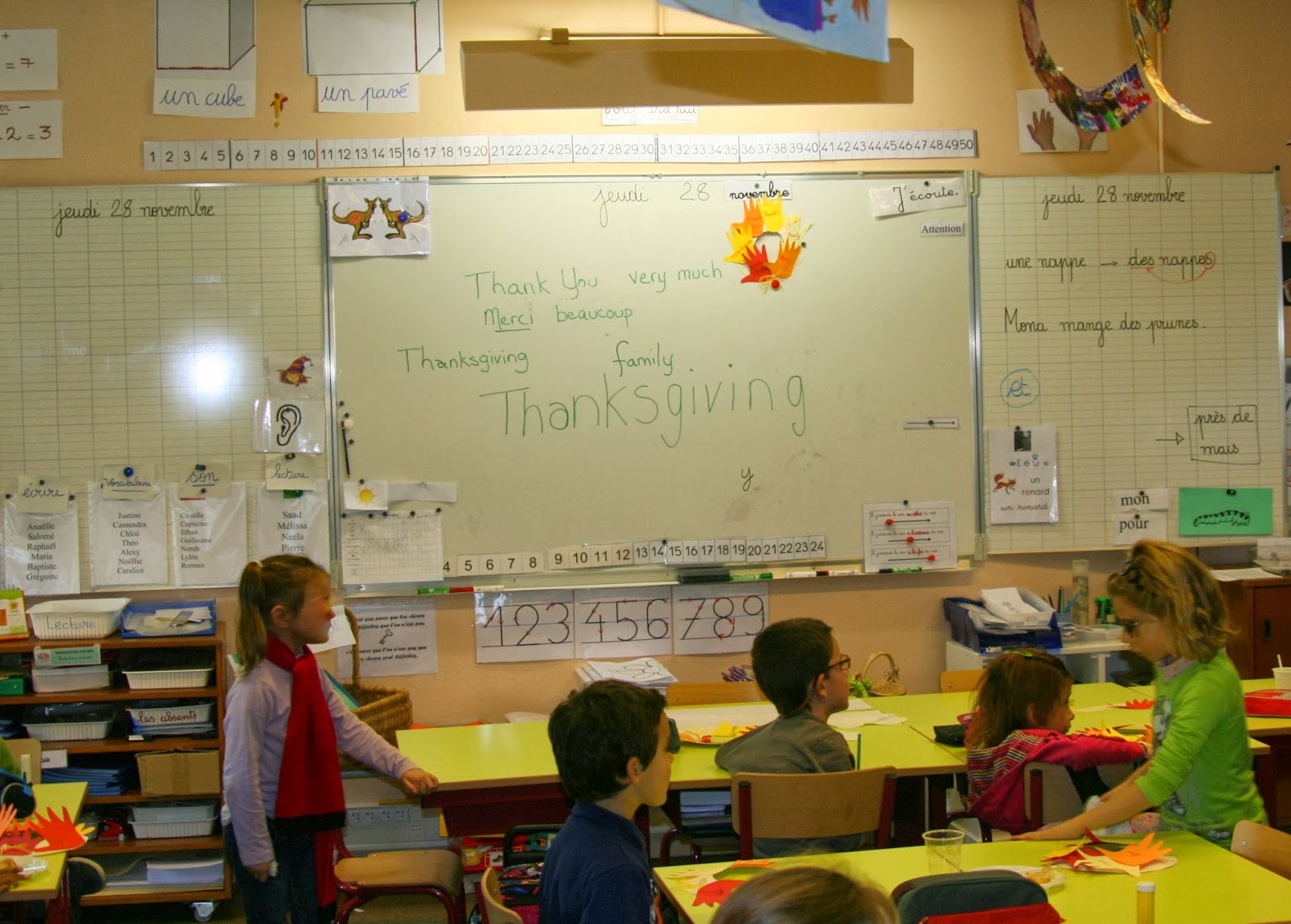 After they finished their wreaths and the pie, one of the student teachers lead them in an English song that they had learned.  It was definitely adorable!

So, that is how I spent my Thanksgiving day!  The kids went to school, my husband was at work (well, actually even out of town!) and I got to join my youngest at school for the last hour of the day.  I have to say - I did feel like I was missing out on something as my thoughts often wandered to what my family and friends would be doing back home in the States.  But I have to say - to be able to share about this special holiday and enjoy a great moment with my daughter's class was truly a Thanksgiving Day to remember!!

We just postponed our Thanksgiving meal until the weekend.  I spent most of Friday and Saturday cooking our favorites.  My middle daughter even helped me with making Nana's Apple Sausage Stuffing.  My oldest daughter made the Jello molds - choosing 2 different kinds.

We hosted some wonderful French friends who have now been able to join us for 2 years in a row.  It truly makes for a special tradition.  I updated a few recipes this year - choosing to make an Oven roasted sweet potatoes & pears dish (Thanks goes to my friend Zosia - over at zosia Cooks) along with a Green bean casserole. Other dishes were mashed potatoes, pureed butternut squash, Apple Sausage stuffing, cranberry sauce and of course, the Farm fresh turkey.  We served it buffet style as it gave people the opportunity to choose what they wanted. Due to space issues, we let the younger kids eat first and then the adults and the oldest girls sat down.


We ended our meal with pumpkin and apple pies along with some fruit JELLO for those daring enough to try it.  Interesting enough, the  fruit JELLO was a big hit.  Everyone who tried it found it fruity and refreshing. (Yes, this was the one thing on the menu that we have imported from the States - I receive it in care packages or from friends traveling back from the US).

Overall it was a marvelous Thanksgiving.  Yes, not exactly the same as we would have done in the States and yes, we all missed our  American extended family. We thought about them often this weekend.  The girl's definitely had their melancholy moments reminiscing about past memories. We laughed, smiled and felt sad as we recalled those memories of past Thanksgivings.  These are the times when living so far away takes it toll. These special holidays that hold such precious family value.

I know that's why it's important to me to keep celebrating our American culture and create new and special memories as we live here in France.  We feel so lucky that our friends have joined us for 2 years now.  They are so touched to be included in our American tradition and appreciate our American dishes. They have become good friends and it's so nice to have such beautiful magical evenings and create new memories. Here's hoping those of you who celebrated Thanksgiving enjoyed your long weekend too!

Posted by American Mom in Bordeaux at 11:30 PM