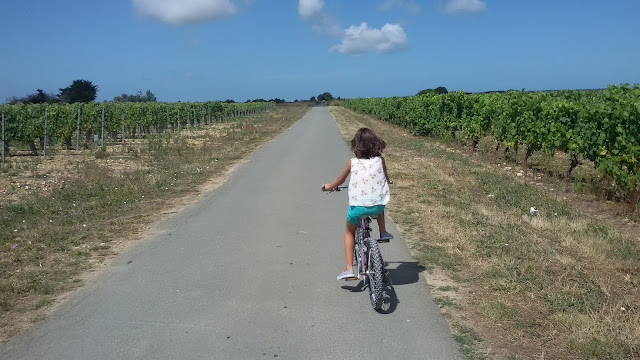 Good afternoon - It's Friday and it's raining here in Bordeaux.  It's a great day to re look at our week on Ile de Re which was full of sunshine and beautiful weather!  If you visit Ile de Re, you see that biking is the main mode of transportation on this island.  They have done a great job with creating bike paths through the vineyards, salt marshes and connecting all the towns. At times these bikes routes seem like mini-highways often crowded with cyclists.

On Tuesday that week, we decided to bike to Ars en Re.  A small village located on the South Western coast of the island.  Remember that we were staying up on the Northern central peninsula, so this ride meant leaving Loix, cutting across the salt marshes and vineyard and heading back toward the main part of the island.  The ride was beautiful. 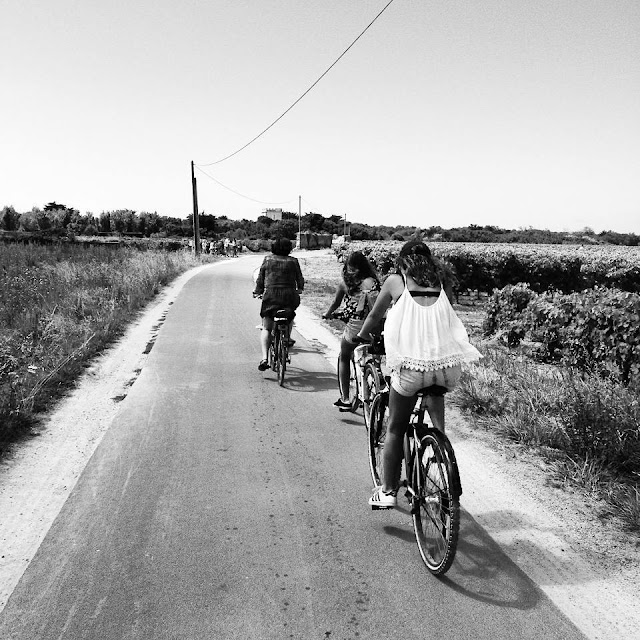 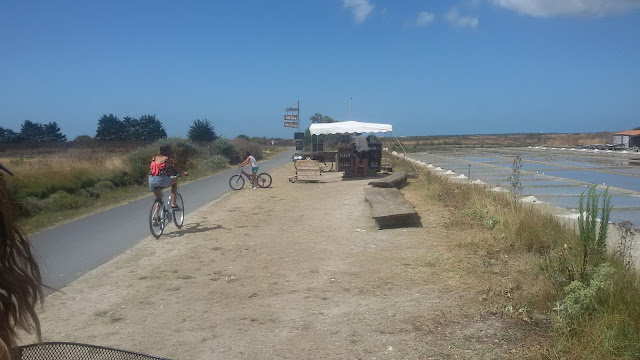 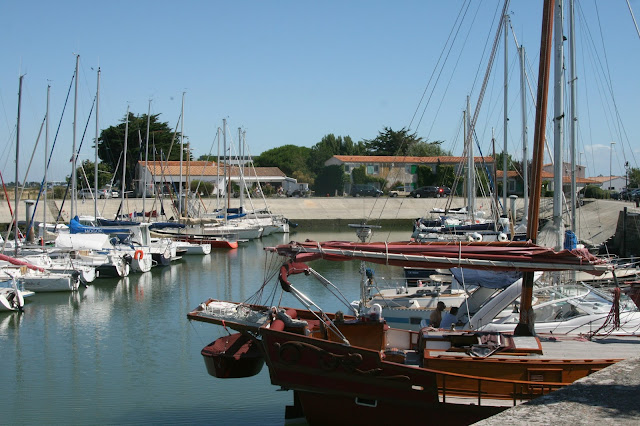 After about an hour of riding, we arrived in Ars en Re.  This ride could be done a bit faster but with a 7 year old and one who loves to stop and take pictures (yes, moi!) - it took us about an hour to cover about 12 kilometers. 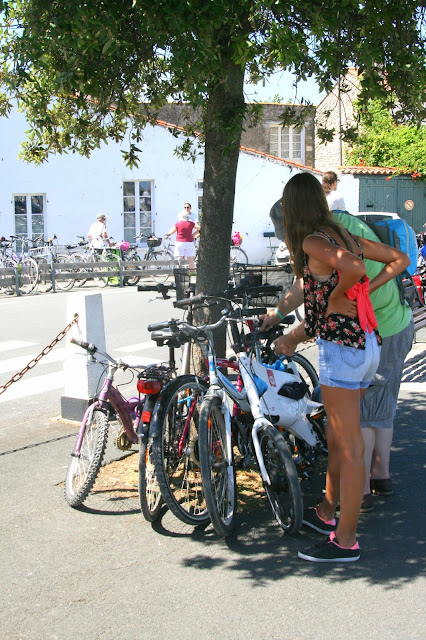 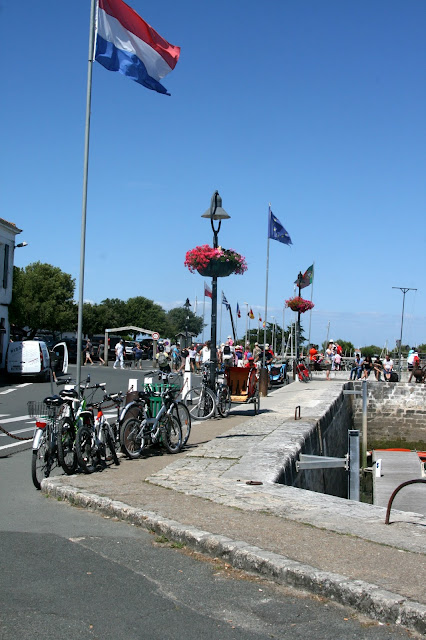 We locked our bikes up at the port in Ars en Re and walked into town to find a restaurant for lunch.  The girls were all very hungry.  All the restaurants along the port were both expensive and full, so we walked further into the village.  Happily we found a great little cafe that served salads, hot dogs and bagel sandwiches.  It was both extremely reasonable in price and delicious!! 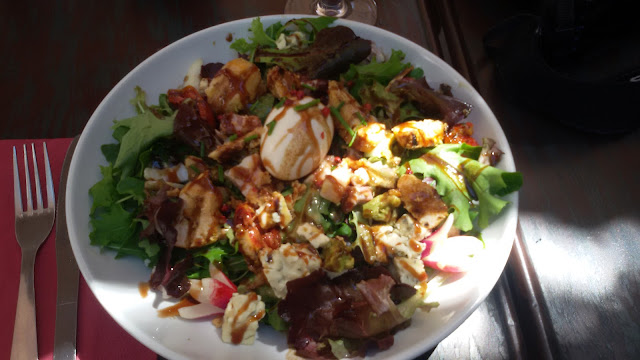 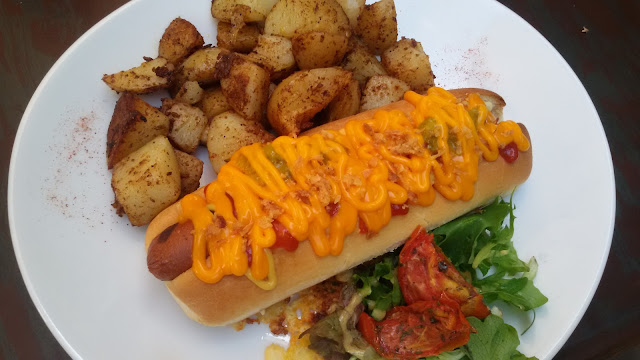 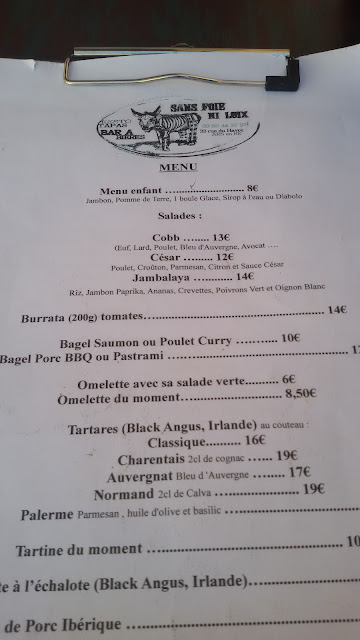 This was a great find and the servings were large and the food really delicious. I loved my Cobb salad - a French twist on the American version.  This one included boiled eggs, bacon, chicken, blue cheese and avocado. Tasted delicious after the bike ride.
My "American" girls enjoyed the hot dog and potatoes.

Also want share that a very refreshing drink here in Southern France for the summer is what's called a Monaco.  A Monaco is an equal mix of beer and Limonade (French equivalent of 7up or Sprite) with a little grenadine added.  It's both refreshing and cool on a hot summer day!

After our delicious lunch, we walked around the village and enjoyed the architecture.  The church especially is unique with it's black & white steeple - which can be seen from miles away!  Funny, side story, the girls spotted it as we left Loix and it seemed so far away that they thought it was the lighthouse on the island - Phare des Balienes.  I think if they had known it was really the church steeple and it was where we were riding, then they wouldn't have agreed to ride so far!! 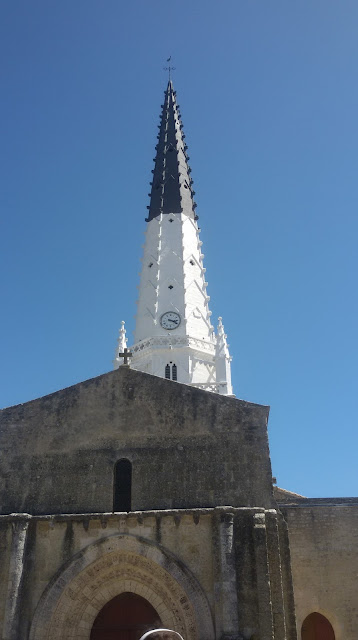 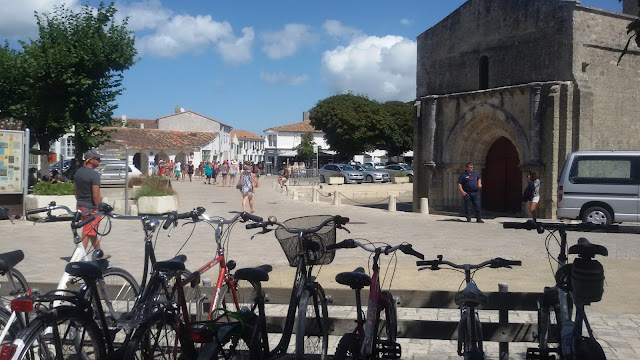 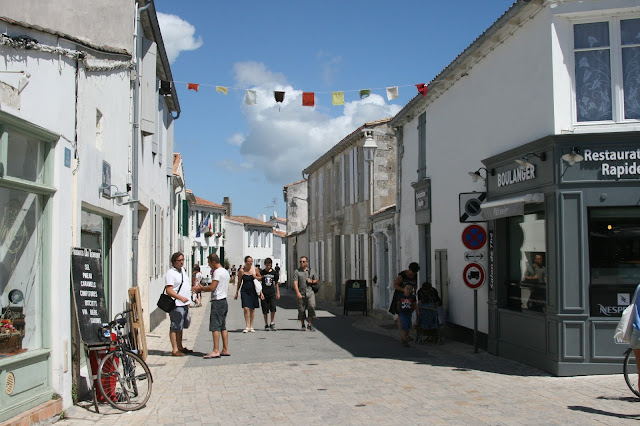 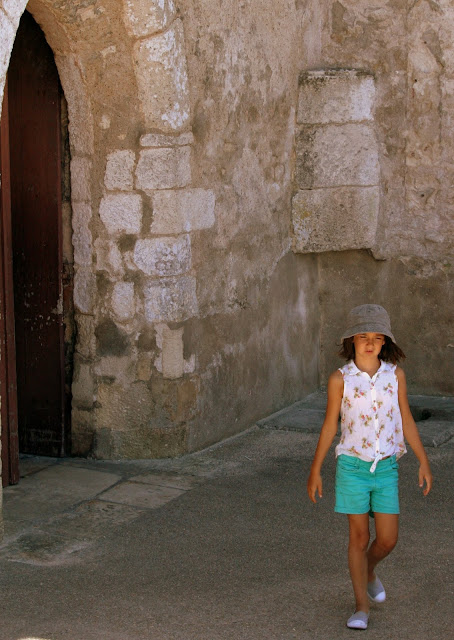 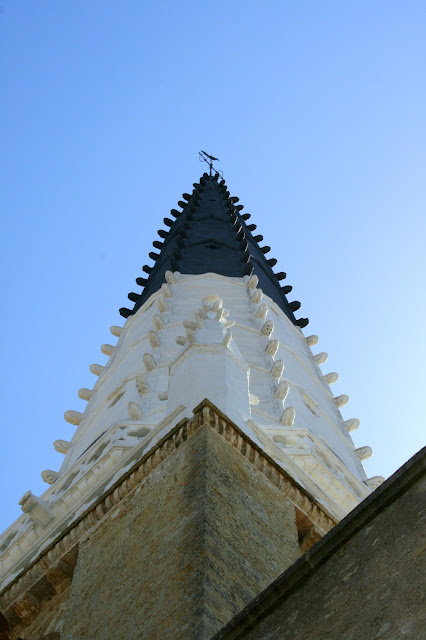 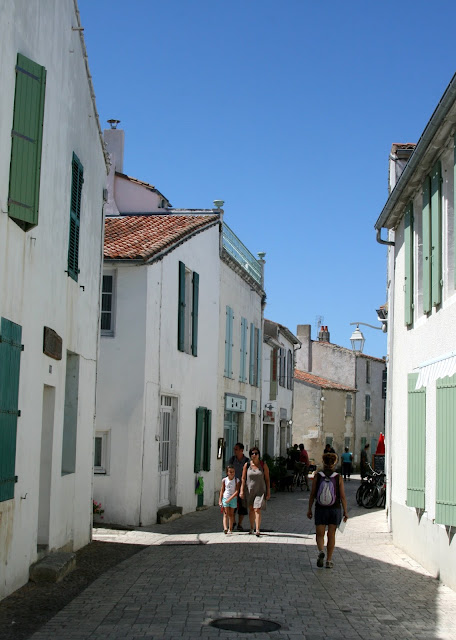 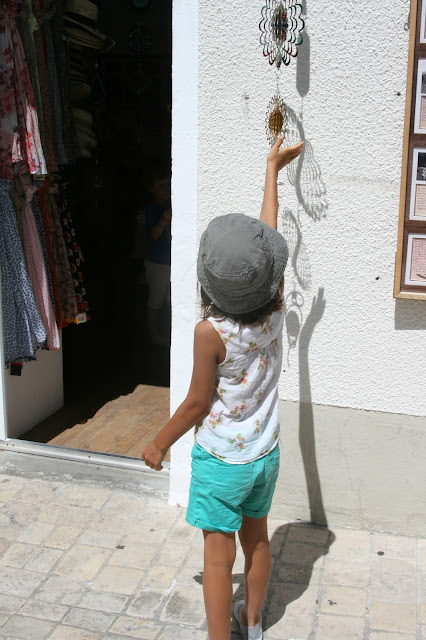 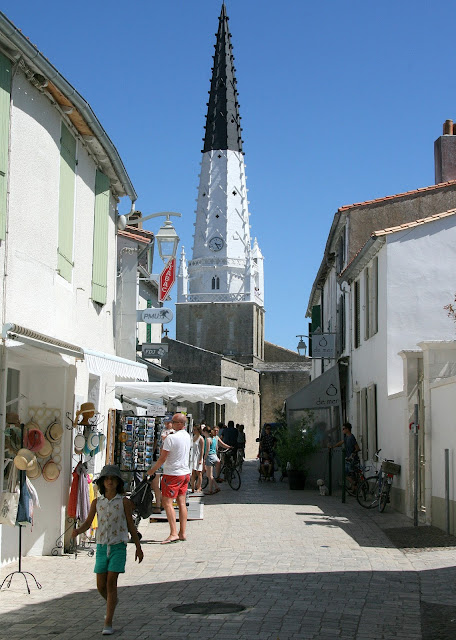 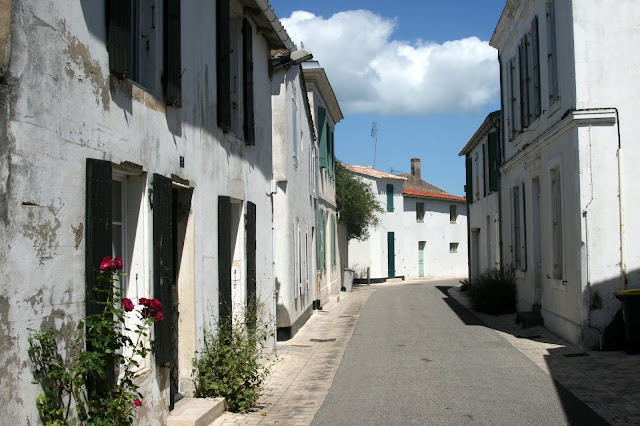 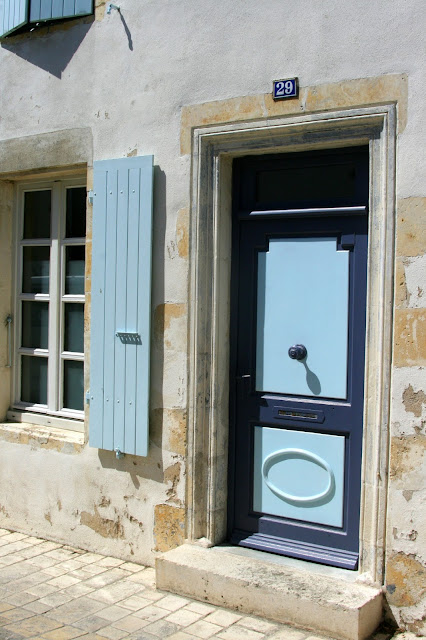 After a leisurely walk around Ars en Re, enjoying the now common white buildings and sea colors, we got back on our bikes and headed back to Loix.  I had two stops to make on the way back.  The first - to buy some salt and fleur de sel (flower of salt) - and some gourmet salt mixtures - all wonderful for someone who loves to cook! 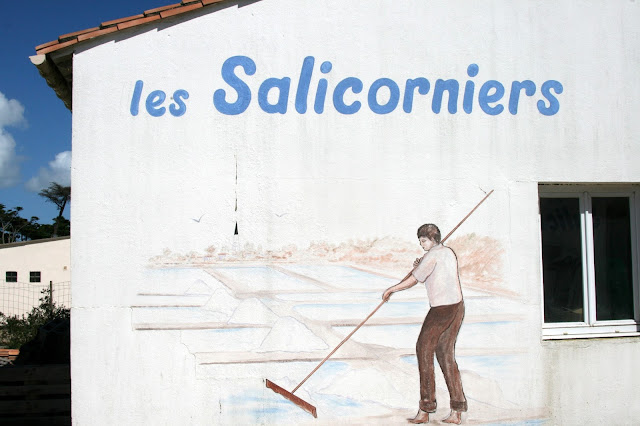 The second stop was to of course buy some Oysters (Les Huitres) to bring back to the campground for dinner.  One can purchase a dozen for about 6/7 euros, depending on the size.  They are super fresh and so delicious! 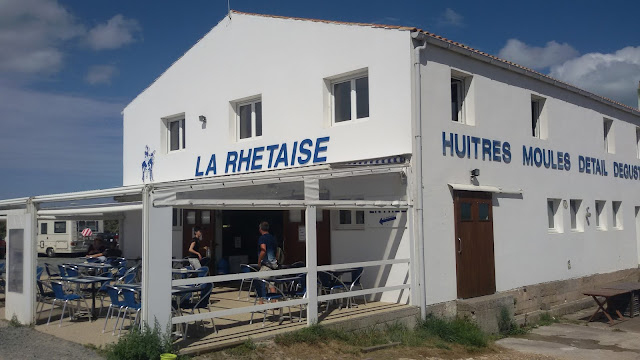 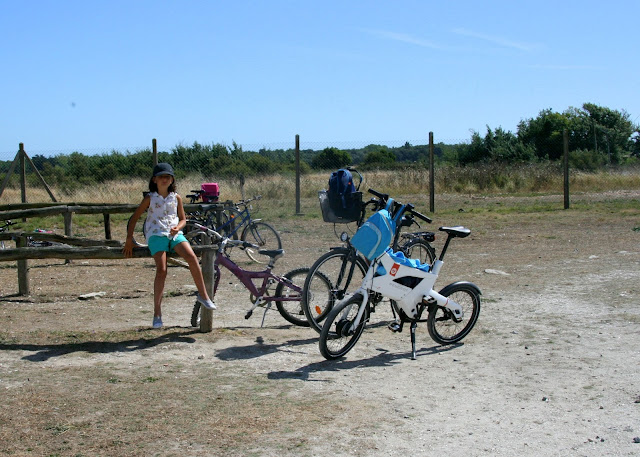 The older girls decided to ride on back to the campground themselves, not wanting to indulge in the two stops but my almost 8 year old was happy for the breaks on the way back.  She certainly has tons of energy and did really well on the ride.  I was so proud of her!!

You can see on the video, how pretty the ride is through the salt marshes and even along the bay in the lower photo - it's just a really picturesque area!  For me there is just something so relaxing to breathe in the salt air and feel the cool breeze from the Atlantic Ocean.  It's definitely invigorating but at the same time so peaceful.  Each time I went out riding, I kept falling more in love with the beautiful natural surroundings and the pictoresque views of the island. 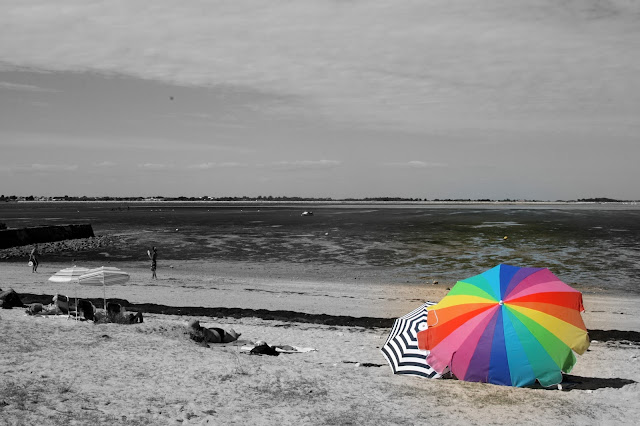 After our long ride - about 25 Kilometers/15.5 miles round trip - we all spent some quality time in the pool!  A great place to cool off and enjoy ourselves!  The kids had all made friends at the campground so were thrilled to meet up at the pool that afternoon.

And how did I end our evening?  With a glass of rose and those delicious oysters!! 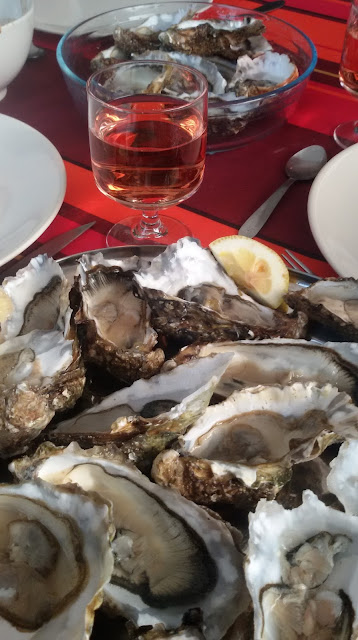 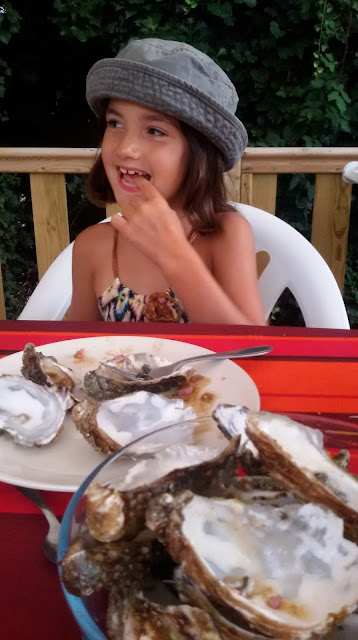 A couple more posts will be following shortly - another great port town to show-called Saint Martin en Re & our beautiful sunset visit to the Lighthouse on the western coast of the island.  Wishing everyone a great weekend!!
Posted by American Mom in Bordeaux at 9:23 PM