We decided for Spring vacation to just stay around and enjoy the area.  Also factoring in was the fact that my brother and his wife were visiting us on either end of the break.  We did take a few days to go out to the Dordogne to visit my in-laws.  They live in Le Bugue, about 2 and a half hours East of Bordeaux.  It's always fun to head out there as my mother in law is a fantastic cook!  She always prepares fresh delicious meals.  Most of our time there is spent hanging out with family and of course enjoying the wonderful meals!  Unfortunately the weather this time, was a bit cool and rainy.  We did decide on Friday afternoon to take the kids out to a ropes course in between the showers.  We got lucky and it was dry the whole time we were there.

We had experienced a rope's course almost 3 years ago when we had the 2 older girls (then 5.5 and 8.5 years old) in the Landes region in South Western France.  They enjoyed it so much, they continued to talk about it for a long time afterward.  Knowing my youngest was now old enough to do a small course, we looked on line and found a course about 35 minutes away just past Sarlat - La Foret des Ecureuils.  There were actually 3 courses in the region, but since it's only Spring, we went to one that we knew would be open. 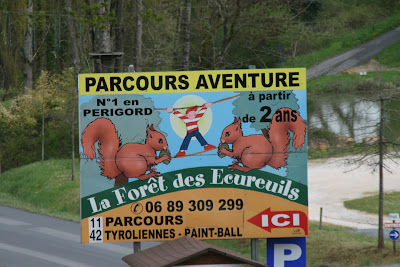 It's funny, the sign says from age 2 - but my youngest at 4 and half was just confident enough to handle her course. (Which was for the youngest kids)  Changing her harness rings took a bit of strength also.  She was excited to join the world of adventure with her sisters.  You can see from the photos that she was a bit nervous and had to concentrate at times but persevered.  It was so nice to watch her go from nervous to more and more confident.  There were even some parts where she stood back and accessed the situation before stepping forward.  I also chuckled as she initially thought she would fall but when she lost her footing in one area and realized the harness was going to catch her - she wasn't going to be stopped after that.

Now the older girls were tall enough and old enough for the advanced courses.  Way up in the trees!  They got harnessed up and given their safety instructions and off they went.  I stayed on the lower course and supervised my youngest.  My husband coached the older girls from below on their courses.  Now for my fearless 11 year old, she just took off.  She got ahead and just kept going - tower by tower.  She completed 2 circuits in the 2 and a half hours we were there.  She especially enjoyed the tower that overlooked the valley road down below.  She said it felt like she was on top of the world!  Now, you have to know here, heights are not my thing.  I very happily allowed my husband to supervise and coach the older girls.  Just watching my oldest daughter finish the last 2 towers at the end was enough for me!

My husband did share that the toughest part of the experience was when my eight year old panicked on one of the towers.  She unfortunately had pinched her finger on one of the pulley lines and was afraid to pinch it again.  She was also at that point, on one of the highest towers and the only way off was to continue.  The course does have "emergency" exit points at several towers but not at this particular one.  She apparently cried for a minute or so, but as he reminded her - he couldn't get to her, she stopped, pulled herself together and continued.  I got to experience the end result of triumph when she came running down the hill to me (where I was with her younger sister) yelling she had gotten scared but did it anyway and it was GREAT!!

It wasn't until later that I actually learned just how scared she really was.  I have to say these course are great confidence builders.  Again, all of the girls talked about their experience the whole way home.  It was so nice to hear them acknowledge and congratulate each other on their success!  I'm sure we will be looking for more of theses parks from time to time.  The other neat thing about these parks is that you can redo the circuits as many times as you wish.  Most of these parks have refreshment stands and picnic areas so you can even bring a lunch and go back and do more rounds.  A great way to spend some family time!!


Posted by American Mom in Bordeaux at 4:21 PM