It's the end of the Year - Time for Kermesse

So sometime about March my youngest daughter's Preschool (Maternelle) started sending home information about something called Kermesse.  They were doing a couple different little fund raisers - like selling crepes one afternoon and  selling photos of the kids at Carnival.  All of this was to raise money for Kermesse....Kermesse?, I say to my husband...What is Kermesse?

He then knowingly and nostalgically says "Oh, Kermesse, I loved Kermesse, it's so much fun."  That's great, but it didn't answer my question...so I try again.."Tell me about Kermesse".

He tells me that Kermesse is something Maternelles do at the end of each year.  It's a mini carnival or fair.  The word Kermesse is actually Flemish for fair or carnival.  He says they do little games and the kids win prizes - He fondly proceeds to reminisce about a couple of favorite prizes that he won at Kermesse....a little spin top and a cute stuffed animal.  I chuckle to myself, as I've known my husband for over 20 years and never once have I heard any stories about Kermesse.   New word and new tradition for me!  It's funny, I'm learning that now we are in France, all these school and family traditions are coming back to him and I get to see a whole new side of my husband and his childhood!

Kermesse is just one of those traditions that has been a part of French schools for a very long time.  It basically involves a simple end of year show with each class performing a cute little dance number to adorable music.  The kids are dressed up alike and it's up to each teacher as to what they choose to do.  There is often a theme each year....

So our Kermesse was last Friday night.  Apparently, our Kermesse was held a bit earlier than most - I guess it's more traditional that they are closer to the end of June.  Sort of closing out the school year.  I have to say though, no matter when it happens, it is definitely adorable and so cute to watch.

They started with each class parading in holding hands and carrying a balloon.  Once all the classes had arrived, all the kids let the balloons go.... 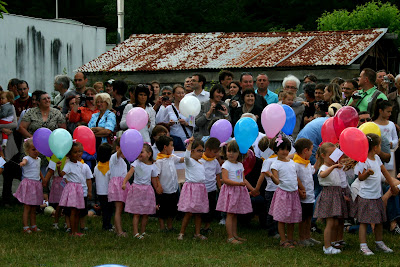 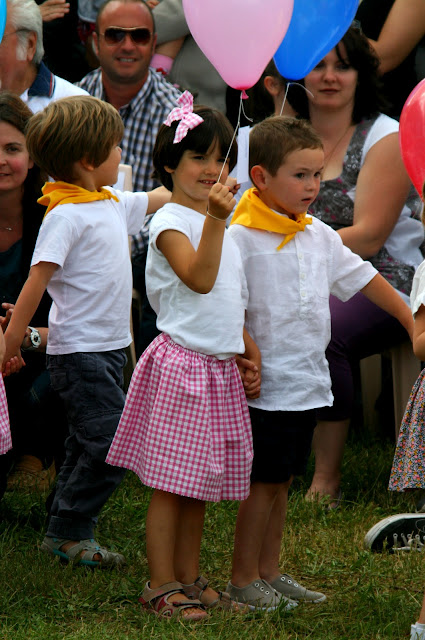 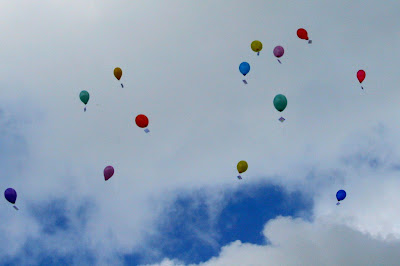 Then all the classes sat down on benches and one at a time each class performed their number. 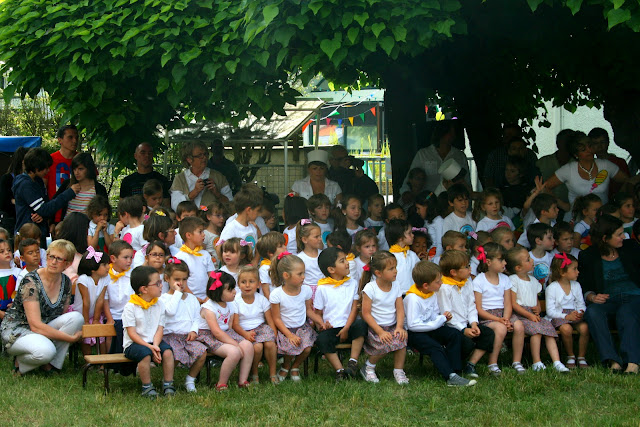 This is my youngest filing out to get ready to start their dance. 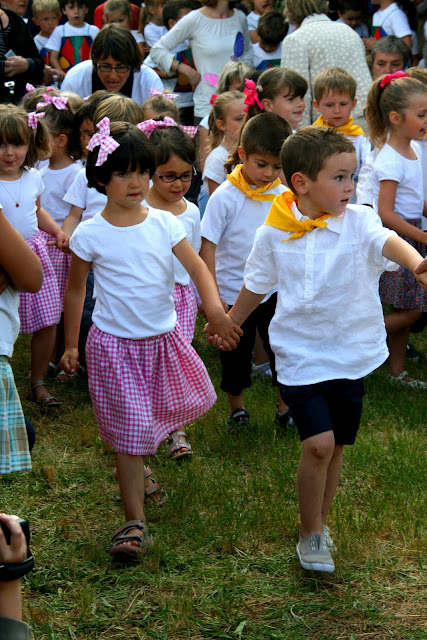 Of course you might put the American child in France, but you can never take the American spunk out of the child!  She loves to smile and joke with the camera. 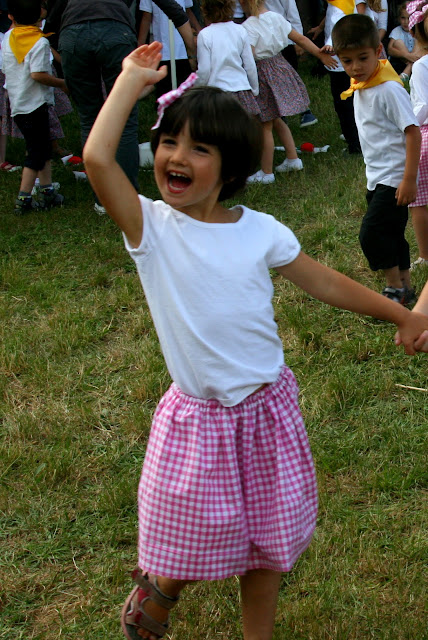 Each group had their own props for dancing, the umbrellas, baskets & "lollipops" were brought out for my daughter's class. 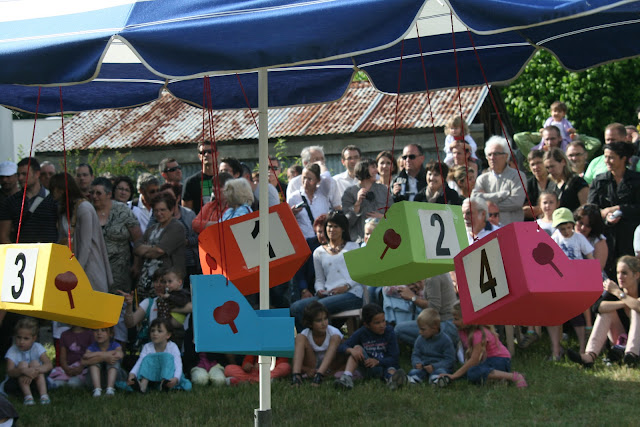 The teachers got them all lined up - holding hands and ready to go. 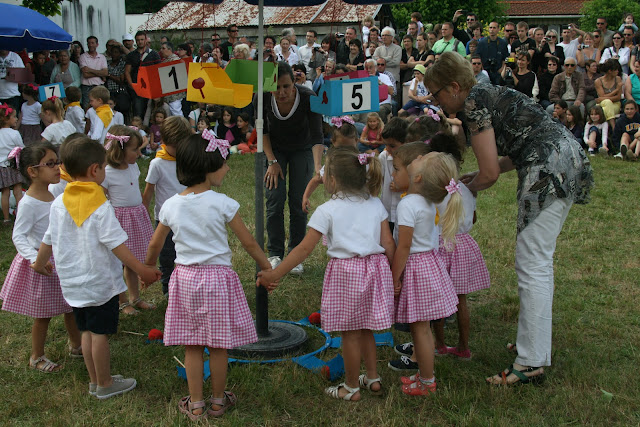 and the music begins...sort of wish I had a video to post here.  So cute. 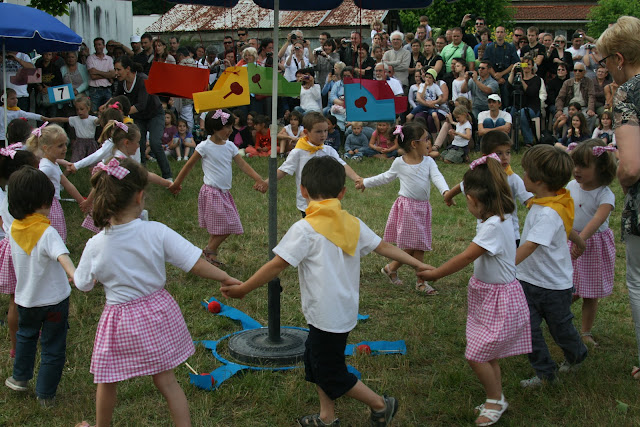 Her class was split into 2 groups under both umbrellas - boys and girls alternating.  A familiar French child's tune played for the kids.  Round and round they went... 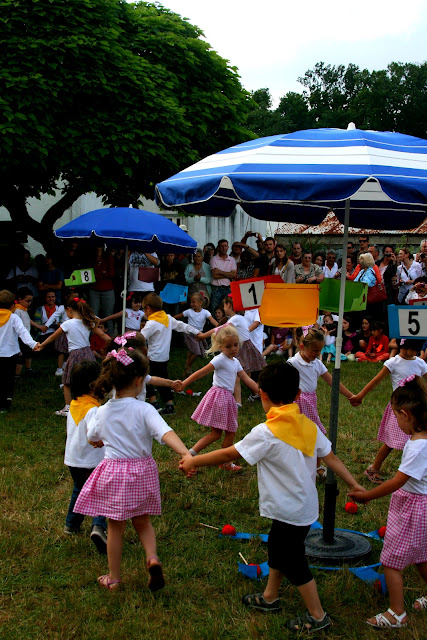 They continued and split into pairs...I laughed at my middle daughter's reaction to this...."Mom, she's dancing with a boy....They are holding hands....I would be so embarrassed!". 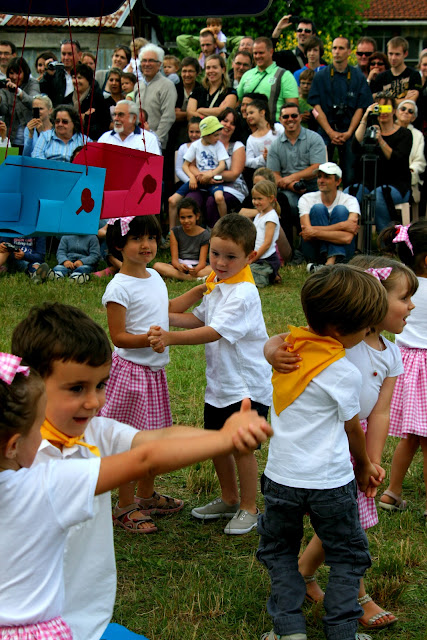 Each class got up and did a different dance and each class were costumed by their teachers.  Very sweet - simple and lots of fun! 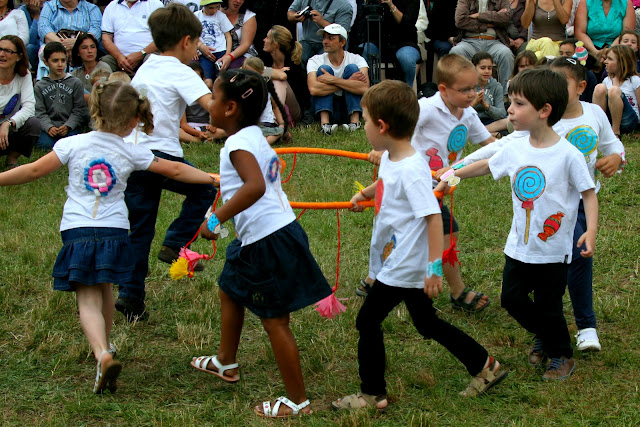 Older siblings gathered with their friends to watch their brothers or sisters. 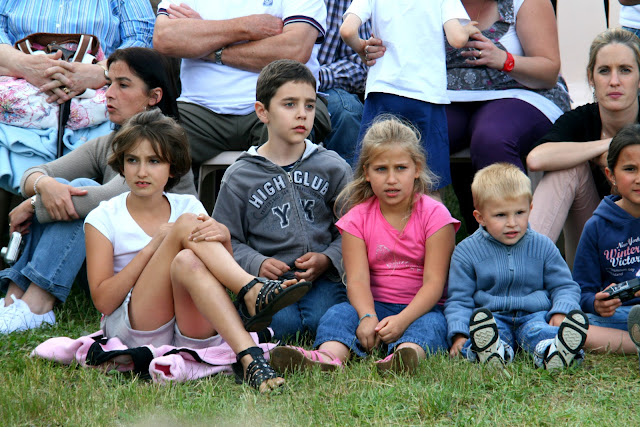 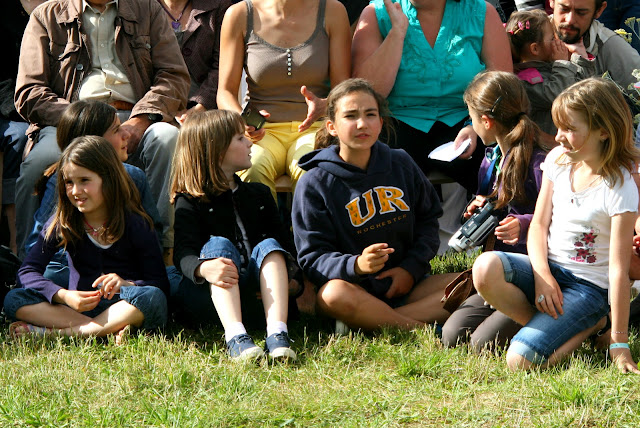 After all the class performances were completed, all the groups got up and did a finale loop to music.  It was fun to see all the kids - (range in age from 3 - 6)  Maternelles here go through the American Kindergarten - essentially there are 3 grades represented - 3/4 year olds, 4/5 year olds and Kindergarteners. 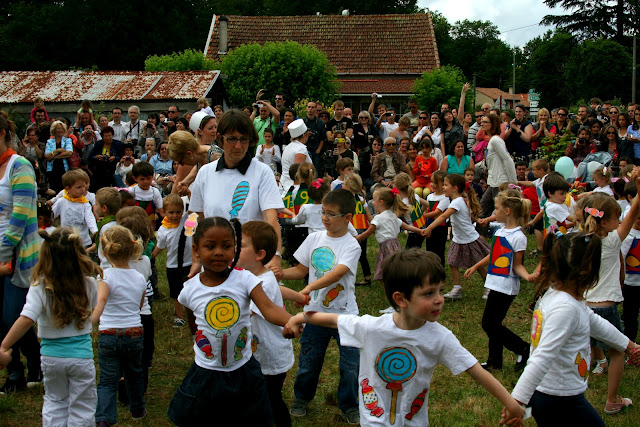 Parents and families were looped around the far end of the yard and on the sides - some were even sitting on the back fences.  Like any school event, this was very well attended and looked forward to by all! 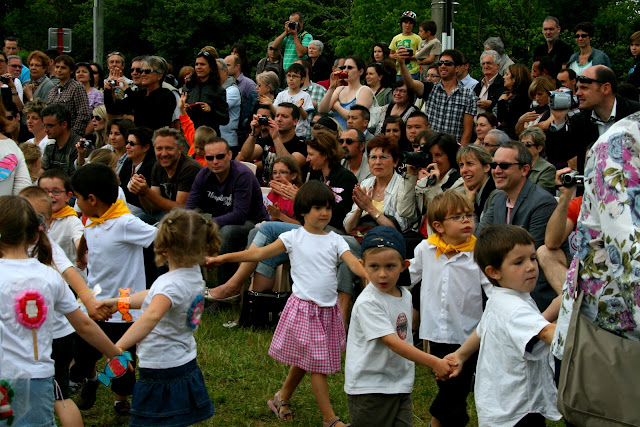 The treat after the performance was a few of the fathers have a small band and played a couple "popular" songs for the group.  The kids and adults had fun getting their groove on! 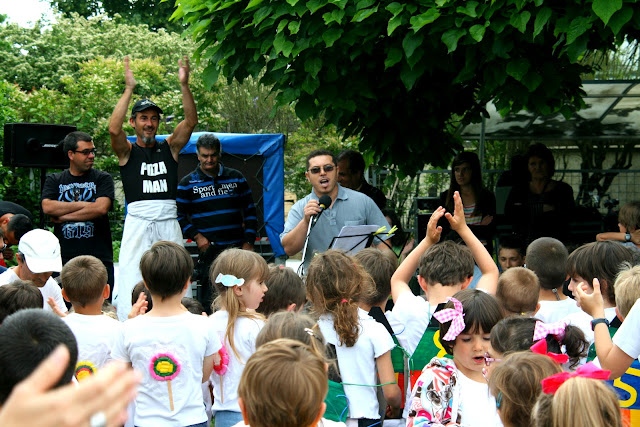 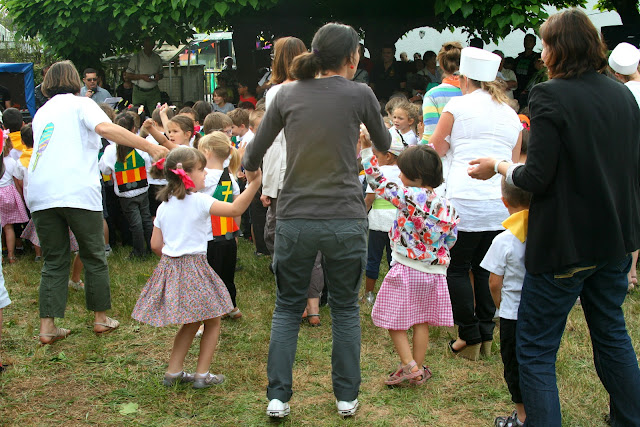 The whole performance lasted only an hour.  It was very refreshing to sit through a cute end of year performance that was just an hour long!

Then, off we went to the other side of the school to enjoy the carnival! 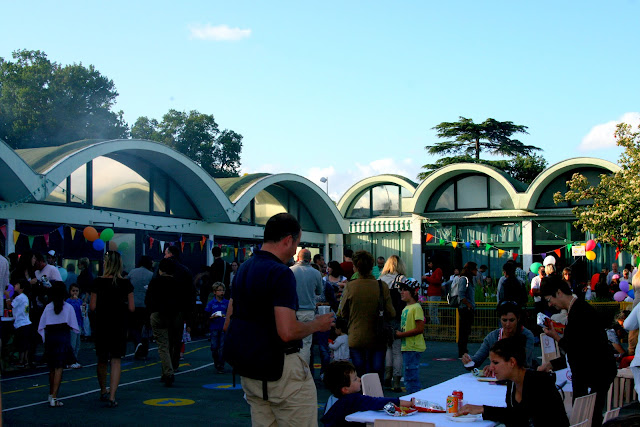 Bake goods were sold for dessert - all provided by parents. 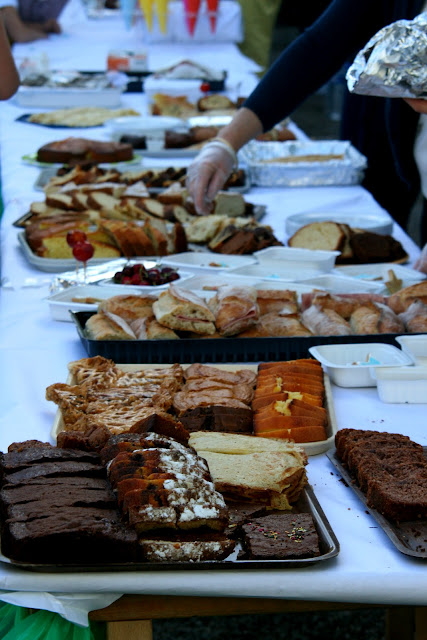 Fishing for a package was very popular. 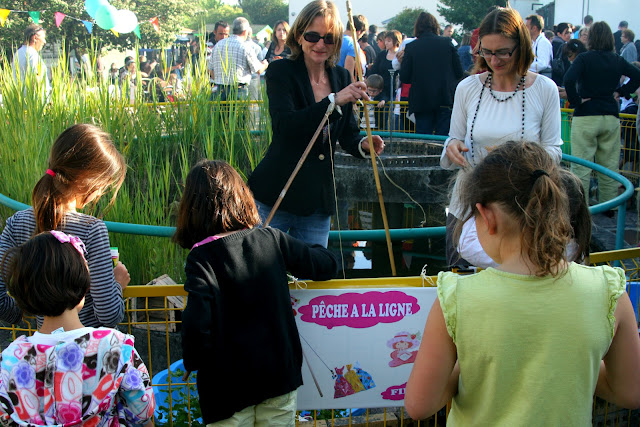 Sack races were loads of fun too - Games were set up costing 1,2 or 3 tickets.  My kids learned very quickly how to use their tickets. 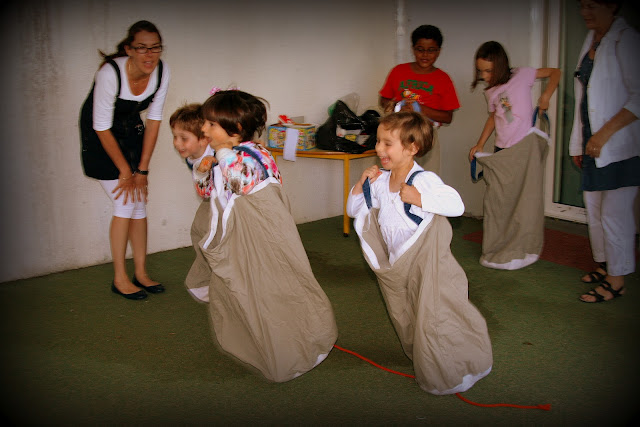 My husband brought back his childhood by supervising his favorite game of fish for the ducks! 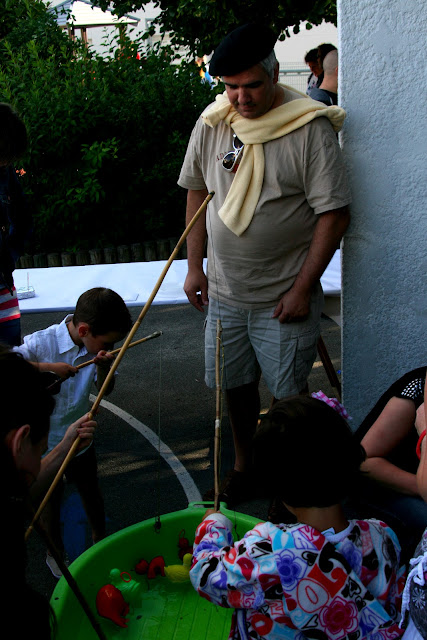 He even got help from my middle daughter...or maybe she was trying to win a prize? 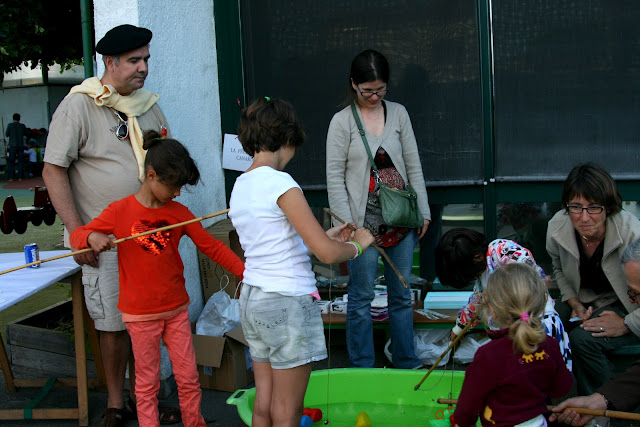 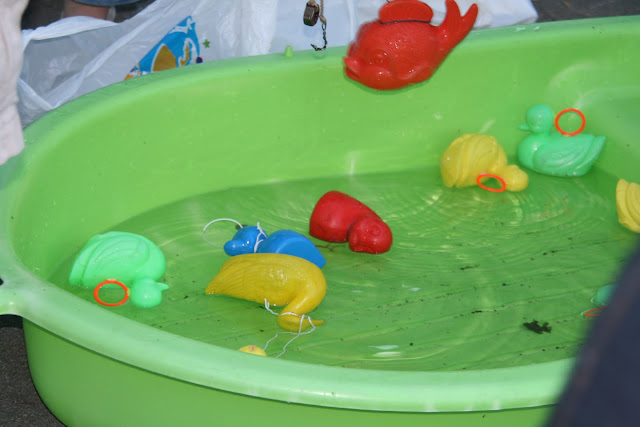 So after you win all your prizes...Isn't it fun to share and show your friends your new treasures! 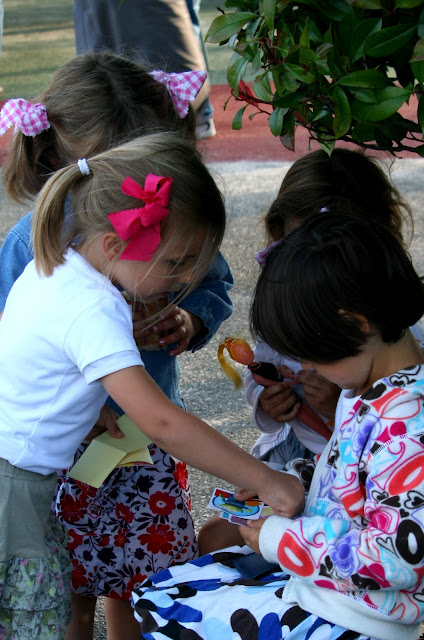 and enjoy some downtime playing at the end.  It's very hard to go home after such a fun evening at the Kermesse!  I do look forward to next year and enjoying another Kermesse! 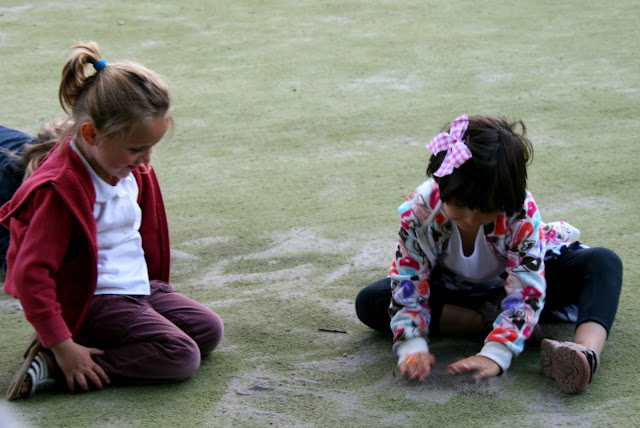 Posted by American Mom in Bordeaux at 3:41 PM