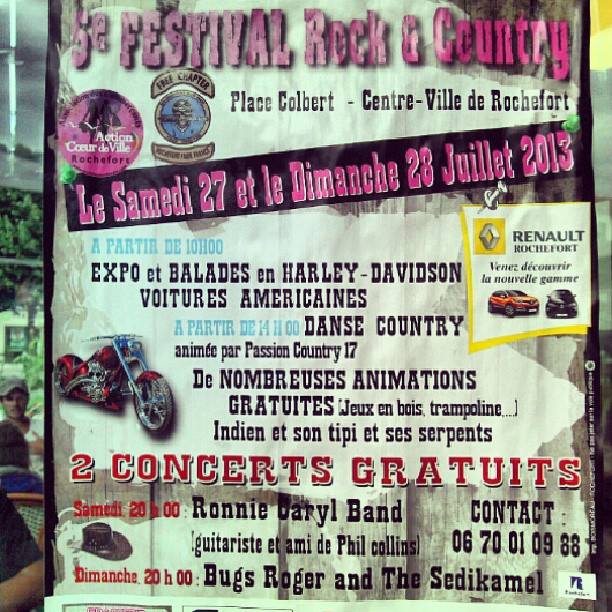 The other week I came across an advertisement for a Rock & Country Festival.  The Poster is to the left. - we decided to check it out for a couple of reasons - First - it was in Rochefort - a town in the Charente-Maritime region- North of Bordeaux that I've wanted to check out for a while. and Second) -as Americans it's nice to experience a little Americana from time to time.
We arrived in the middle of the afternoon and walked to the town square where the event was being held.  This particular afternoon was country dancing.  Apparently, there are many groups of French people who learn country dances and then come to these events.  They were all decked out in Country Western wear.  They were playing music from the bandstand and announcing songs ahead of time.  Many groups would get up and dance.  For me this was a bit surreal - seeing everyone dressed in country western gear but then all talking French!

Each group seemed to have matching costumes and of course the hats.  They were playing real American country music.  It was fun to hear it playing in the background...but for some reason I kept wanting to see fields and tractors!  The groups did a great job dancing.  I have to say, the French DJ who announced the songs tried very hard to say the song titles, but with the French accent sometimes it was really hard to understand what song was coming next until the song played - For example the French DJ said (think deep French throat accent as you pronounce this phonetically - and imagine the end sounds of each word getting stuck in the throat)  "Goata Keeep Preyin"  for - Gotta Keep Praying.  You can see from the photos that this festival was well attended and many groups came to dance.  (The attendance might have also been down that day, as the night before our whole area experienced terrible thunder storms with up to 100 mph winds, and hail storms leaving many people with lots of clean up and no electricity.)

In addition to the dancing, there were American cars and Harley Davidson bikes on display.  These cars look so funny here, but I have to say many people were very fascinated with them - and kept walking around, checking them out and looking inside.  It was also fun to see people posing next to the cars to have their photos taken.

All the cafes around the squares were all decked out in Red, White & Blue with American flags.  Again, very surreal for me.  The European architecture just didn't fit for me, but it was also comforting to be around some Americana!

We continued to walk around the town.  I was enjoying the beautiful architecture mixed in with palm trees and small parks.

Another part of the festival were things for the kids to do.  One of the favorite animations here in France at most festivals is the trampolines.  My older girls have enjoyed them for years - but this time my youngest wanted to give it a whirl (She's my cautious one at times).  You can see on her face, she was a bit nervous at first but later on, relaxed and enjoyed it.

The kids were hungry after their rounds on the trampoline, so we decided to walk toward the river to find a place to sit down and have a snack.  On our way to the river, we found this wonderful candy shop.  Nougat is a specialty in France and particularly in this area. 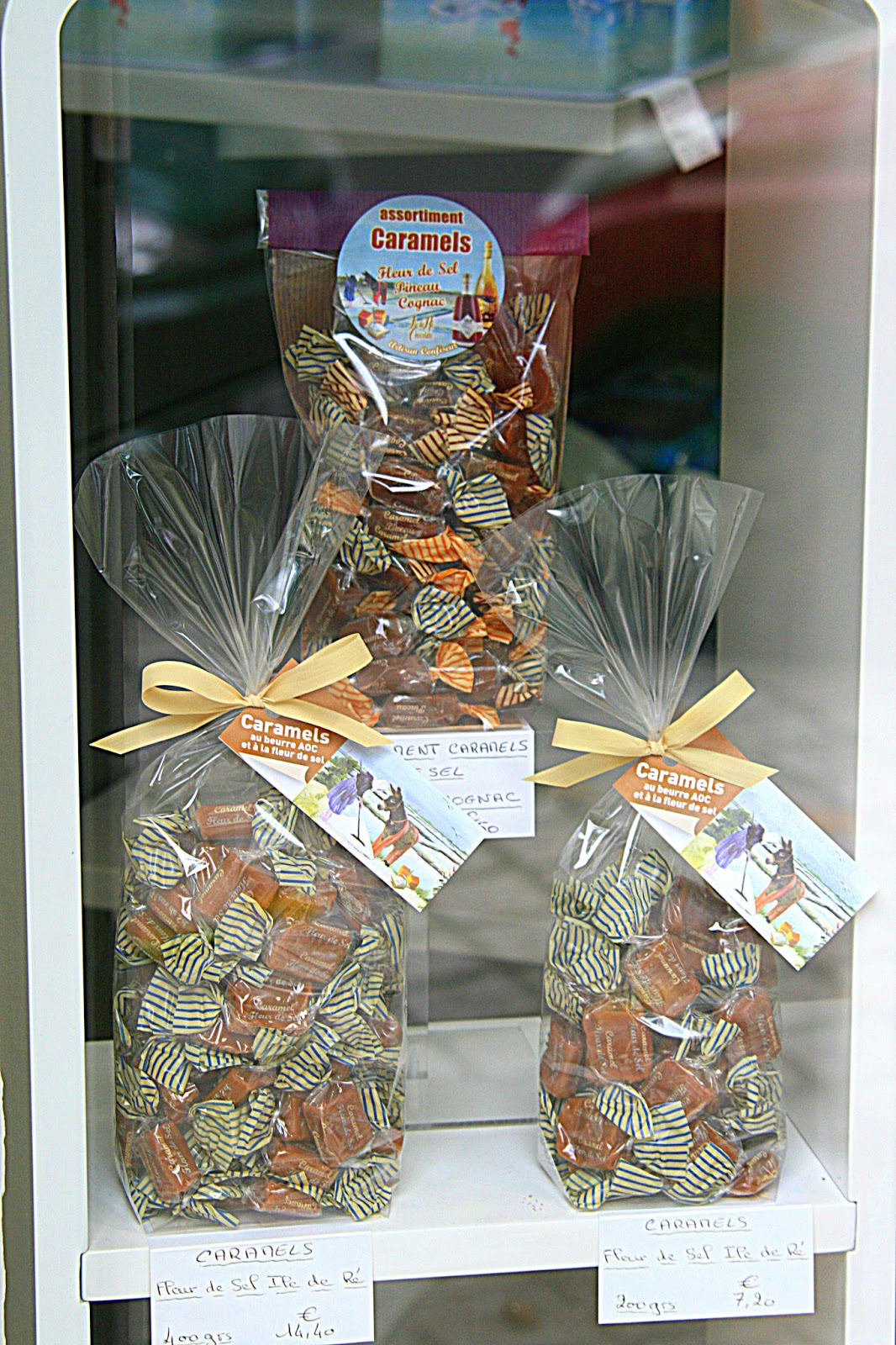 Then I spotted this automobile across the street.  It's an old dairy (cremerie) truck.  I love the items on top of the car!
We continued our walk down to the river and ended up at the Arsenal.  This place has a very interesting history.  Back in 1665, Rochefort was chosen by Jean-Baptiste Colbert as a site for the French Navy. It's location was perfect, inland & protected but easy access to the sea. Between 1666-1669 the king had the "Corderie Royale" (then the longest building in Europe) constructed to make cords, rigging's and ropes for French ships of war. The making of "cordage" ceased in 1867.   In 1926 the Arsenal of Rochefort was officially closed. The building was burned by occupation forces in 1944 and left abandoned for twenty years. Today, the Arsenal has been has been restored for tourist purposes.  It gave us a sense of history to this site. 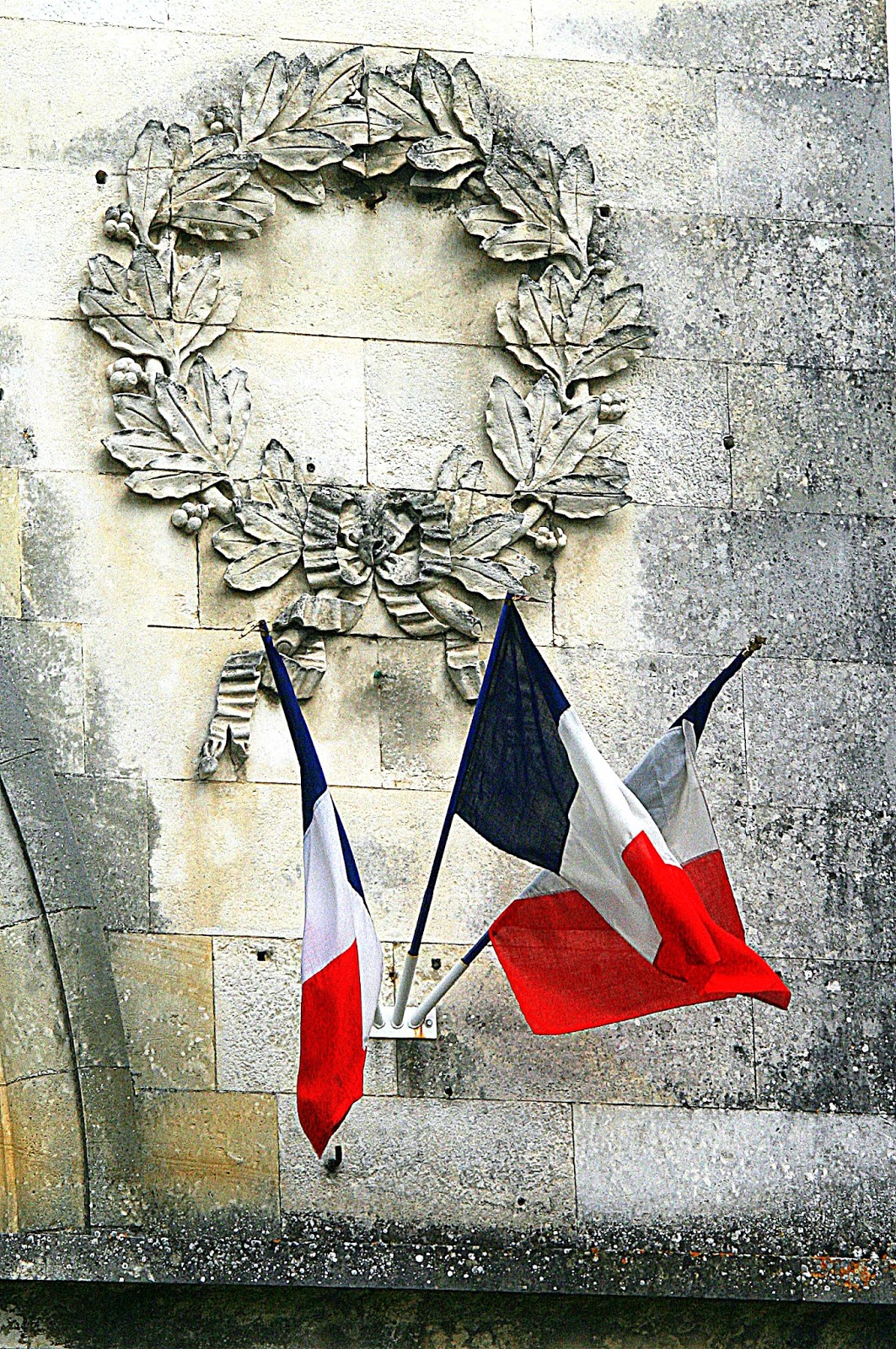 The Hermione is the famous ship that took the Marquis de LaFayette to America in 1780 to fight in the War of Independence against the British. Today in Rochefort, there is a chance for visitors to to see a near-perfect replica of the 210-feet long three-masted oak ship. In 2014, the next exciting phase of the project will begin, retracing Lafayette's voyage to the "New World" by sailing the ship to North America. We didn't have the time to explore this beautiful ship, but it is open for tours.

One of the most fascinating things to my girls as we walked through the Arsenal, was the locks and gates that were used to keep water out of the dry docking area and also hold water in the area where the Hermione was anchored.  They were trying to figure out how it worked - did you lift it?  How did water get pumped through or held back?  If anyone can answer these questions for us, that would be wonderful - we were a bit stumped!

After we enjoyed the Arsenal, we headed back into town to find a place for dinner.  As we got closer to the festival, the kids decided to take some time to enjoy some of the old fashion wooden games that were out for people to enjoy.  These were lots of fun.  We have seen them before at other festivals, they are always free and usually you don't have to wait too long for a turn.  Rules & directions are attached to each one, in case you are not sure how to play.  This game was a four person game to see who could get all of their balls laid on top without any falling through.  I love the concentration of everyone.

We then decided to be American and partake of the Ribs & potatoes that were being served in honor of the festival!  My oldest daughter was in heaven!

As we were waiting for our table, there was an Indian fire blowing demonstration going on.  This was what I loved about this festival - they wanted to include everything "Americana" that they could think of....Music, cars, motorcycles, & Indians.  No necessarily part of the same era, but I'll go with it!  (I think they were just missing Elvis Presley!!).

It was a pretty fun day - lots to see, do and enjoy!  My girls humored me for several portraits of all three of them.  This one was my favorite!

I continued to enjoy the architecture and fun stores as we walked back to the car.  It was a wonderful day! I I loved that it was only an hour and half from Bordeaux.  There are many other things to do and see there that we didn't have time - Here's a list of some other attractions in Rochefort.

Rochefort, although located inland is not too far from the Atlantic and a short drive to the coast is very easy to do. We will definitely head back up to that area to see more and enjoy other things.

Posted by American Mom in Bordeaux at 3:51 PM