Fast Food in France - a visit to McDonald's 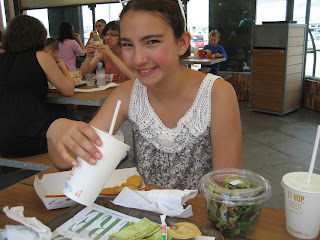 So I have to say, I'm not really a McDonald's fan - but let's face it for a quick inexpensive meal on the go - it's not a terrible option.  When we arrived in France - it was interesting to witness my girls reactions to food and restaurants - everything was new and different.  New restaurants, new options - early on they didn't really know what to choose - would they like?...what was it really?..it was also hard for us to know if the restaurant was going to be quick or if it was going to be a longer meal.  As we have been here longer, I've come to learn where to go for a quick bite to eat, a sandwich to go or pasta box.  All of those options are nice when you don't have a lot of time or want to take a lot of time to eat.

So one Saturday, when we were out running errands with the kids, we decided to give them an "American" treat - and go to McDonald's.  I have to say I was a bit surprised...Many things were similar - they had even adopted a lot of American names of menu items - like the Big Mac, hamburger, McChicken & Happy Meal.  But the quality was so much better. 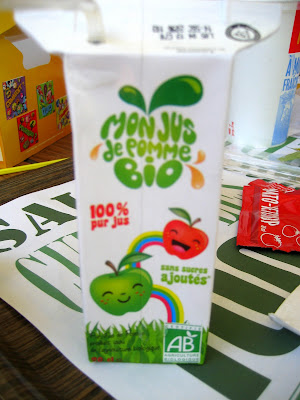 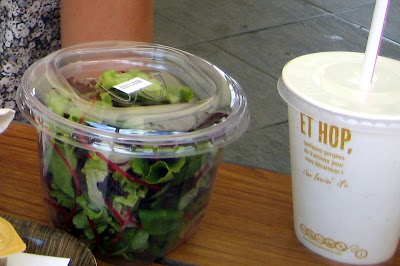 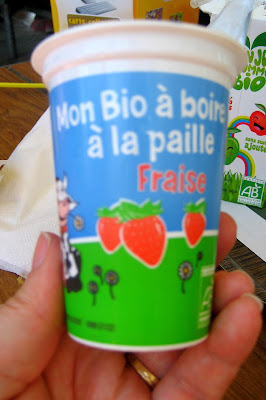 For kids- the Happy Meals have more choices and come with Organic juices (Bio - as they call it in France) and yogurts.  There is also a side choice of small tomatoes if kids don't want fries.  Desserts include fresh fruit, Kiwi's, squeezable organic applesauce or organic yogurt.


For regular meals - the meat just tastes better.   In addition to the regular menu, they also have limited offerings of special sandwiches which I haven't seen in the States.  One example is cheeseburgers with different varieties of French cheese.   There is also a choice of having a side salad instead of fries.  The side salad is baby mixed lettuce -not iceberg - much tastier!

Another difference is part of the French lunch menu is coffee  and a dessert at the end of the meal.  Their dessert menu includes not only biscotti cookies, but also chocolate moose.    McDonald's also offers to bring the coffee to you at the end of your meal so it's hot and fresh.  You just go up to the pick up counter - a separate line and show your receipt and get your hot coffee.


I have to say the best thing I found at McDonald's is how we can order.  Yes, there is the normal , regular line like we have in the States.  But McDonald's here also have 4 computer kiosks where you can place your order with your debit or credit card.  These computers are menu driven, giving you picture choices and they will appear in whatever language you choose.  After placing your order you have a choice to pick it up at a designated line at the counter (often used for to-go orders) or they will bring it to your table.  Yes, you did read that right...place your order, print your receipt and go sit down....avoid the lines, the crowds and just wait for your meal.  It's a wonderful service!

So even though, McDonald's is an American phenomenon, the French have certainly made some changes to adjust it to their culture - and I have to say it's nice. 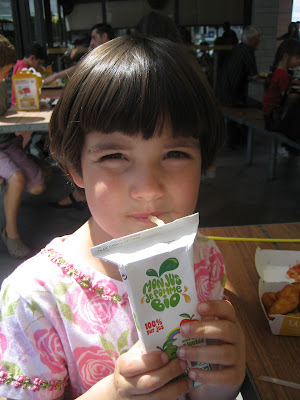 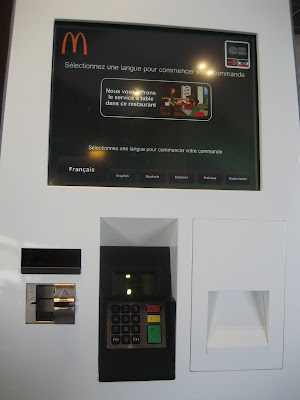 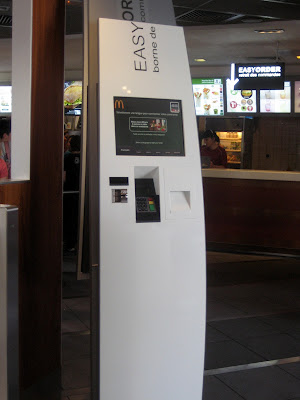 Posted by American Mom in Bordeaux at 9:06 PM