St. Cyprien -Dordogne - A trip back to childhood 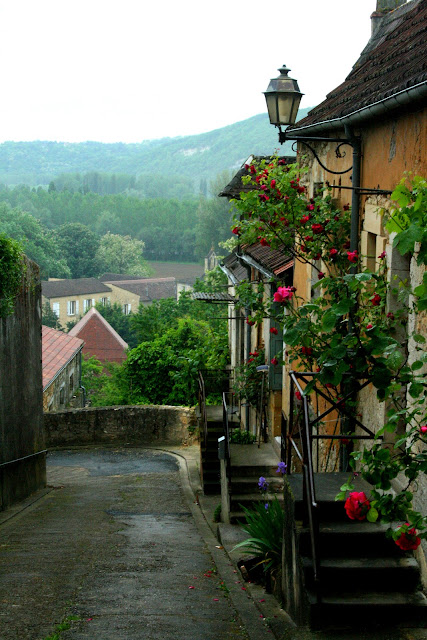 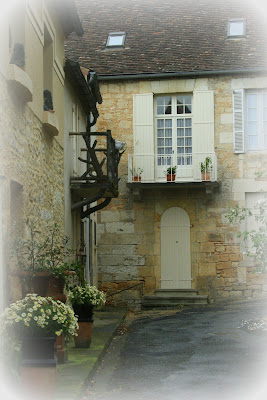 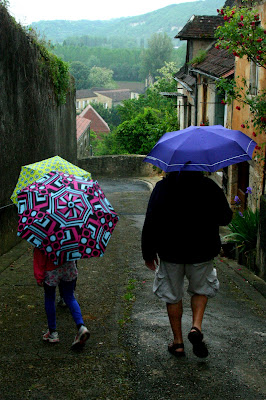 This past weekend we took part of the long holiday weekend (Here, we celebrated Ascension -Thursday and a bridge day Friday) and went to the Dordogne to visit my husband's parents.  The weather wasn't the greatest - but we did manage to do a couple of fun things.


On Friday, after a traditional long noon-time meal we had about an hour to take the girls out.  We decided to take them to the next town, St. Cyprien,  where my husband had spent many summers staying with his grandparents.  Even though we have been through the town many times and in the summer, I have even gone to their Sunday markets now and then.  We realized the girl's didn't know too much about my husband's childhood summer there.  The older girls are now old enough to ask about what we did as kids.  We left our youngest having fun with her grandfather and took the 2 older girls on a trip down memory lane.


He decided to give them a tour from his point of view.  We started with the house where he stayed with his grandparents and then he talked about his "summer" friends and where they lived.  He pointed out the sidewalk where they would play monopoly or other board games in the evenings after dinners.  He described each of the neighbors and who they were.  A lot of them were similar in age to his grandparents and also had their grandchildren come stay. 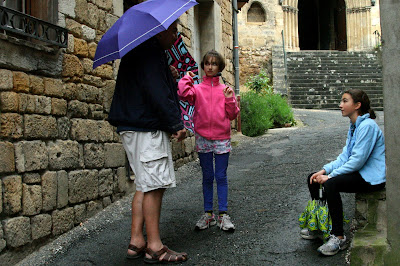 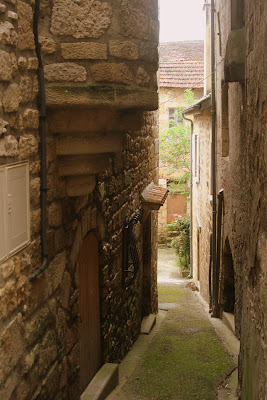 St. Cyprien is a really neat town built into a side of a hill.  There is an old monastery at the top near the church and lots of winding small street wiggling their way to the bottom and main street of the town.  My husband shared about the freedom they had to leave the house after breakfast and return at lunchtime.  They would do the same after lunch and return again for supper.  Oh -the fun they had.


He told the girls that they would play hide and seek, tag and ride bikes.  He also relayed the story of how he broke his arm as a ten year old just running and slipping on the moss-covered cobblestones. ...and the time the brakes on his sister's bike stopped working as she rode downhill.  All the fun stories of youth.


I just adore this town with its winding streets, cobblestone paths, flowers, stone houses.  I always have fun here taking pictures.  It was a lot of fun to photograph it in full Spring time glory. 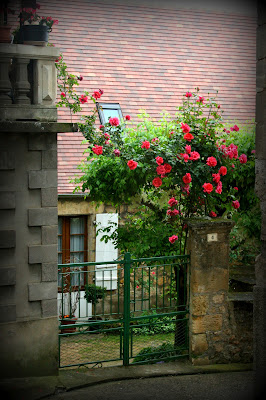 Another game, my husband pointed out to the girls that he loved to play as a child was "jeu du piste"..game of the road - sort of a follow and find game.  All over town you can find chalk like rocks - my husband and his friends would use these pieces to draw arrows on the road to indicate which direction they went.  The leader would have the chalk and would get a head start - each turn he or she would make would be indicated with an arrow - until they decided to stop and hide out at a certain spot.


The girls thought this sounded like fun so they found some chalk and my husband led them all through town by arrows.  It was fun to watch them find which way he turned. 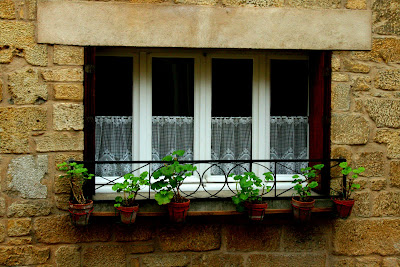 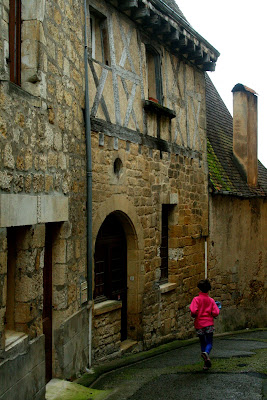 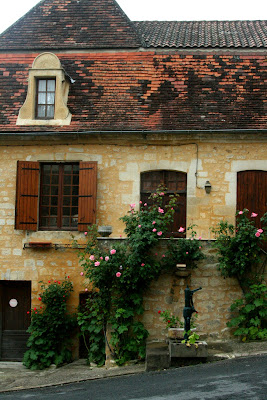 We did this a few times up and down the hills and roads.  Each time the kids wanted to do it again.  My husband laughed and said - "I think staying ahead was a lot easier when I was twelve".


It's so much fun to let the girls see a whole different side of growing up.  They were surprised that my husband would spend so much time with his grandparents in the summer.  He explained to them that this was was most kids did.  Their parents would work usually in July (in his case his parents were up in Paris) and then come down to join the family for the month of August.  He and his sister enjoyed the country life for the summer !  The freedom to run free, explore, ride bikes and swim in the river.  Just enjoy the outdoors and times with other kids their age.


I have to say, if I was spending a the summer in this beautiful town - I would love it too!  I think it was also so nice that he and his sister had "summer" friends to hang out with. 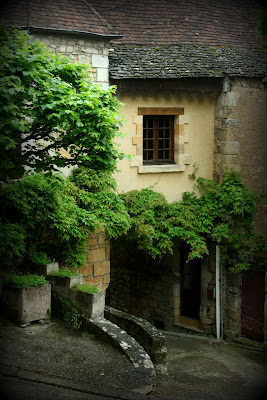 It was a fun hour to explore with the girls.  I just loved watching their expressions as he would share memories.  I know they will have fond memories of their time here in France.  It still amazes me how much each child recalls of earlier trips to France - the memories that stick with them.  I am also aware of how their interpretation of things change..what impressed them at age 5 is totally different than what sticks with them at age 11.  It's fun to return to some of the places in the Dordogne that my husband & I enjoy and see their new impressions.


It's also fun for me to compare how he spend his summers in France and how I, the American, spent my youth.  I didn't stay with grandparents but did spend a lot of time at a summer cottage where we too ran free and found many different activities to do all outside.  I hope that in different ways, my children will look back on fun things they did for summers. 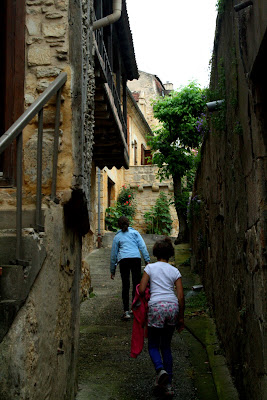 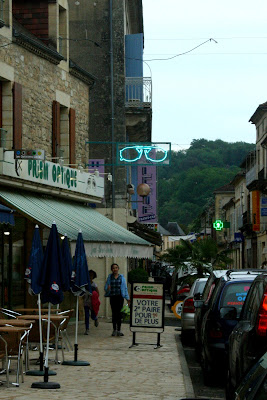 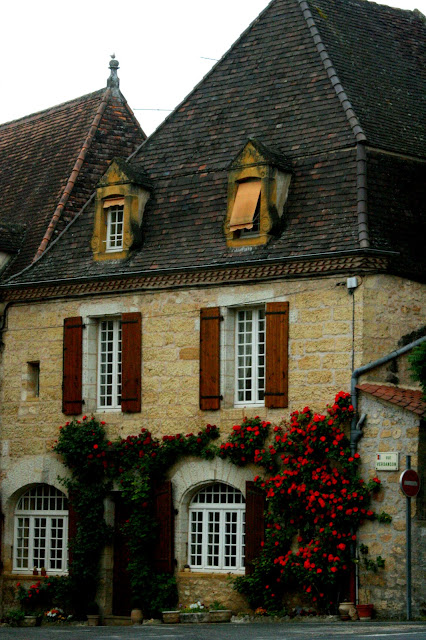 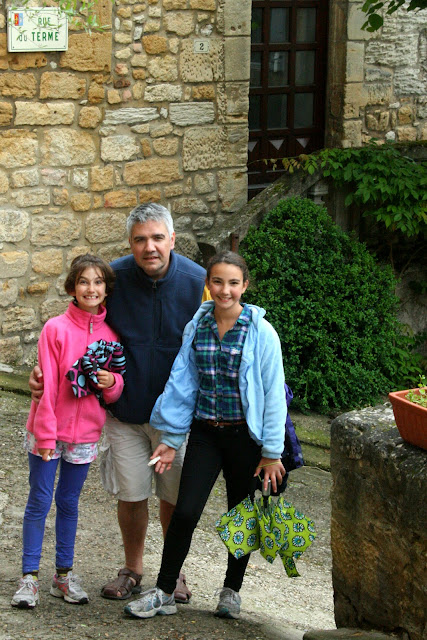 Posted by American Mom in Bordeaux at 10:32 AM