Lourdes - History & Spirituality in the Pyrenees-Part I 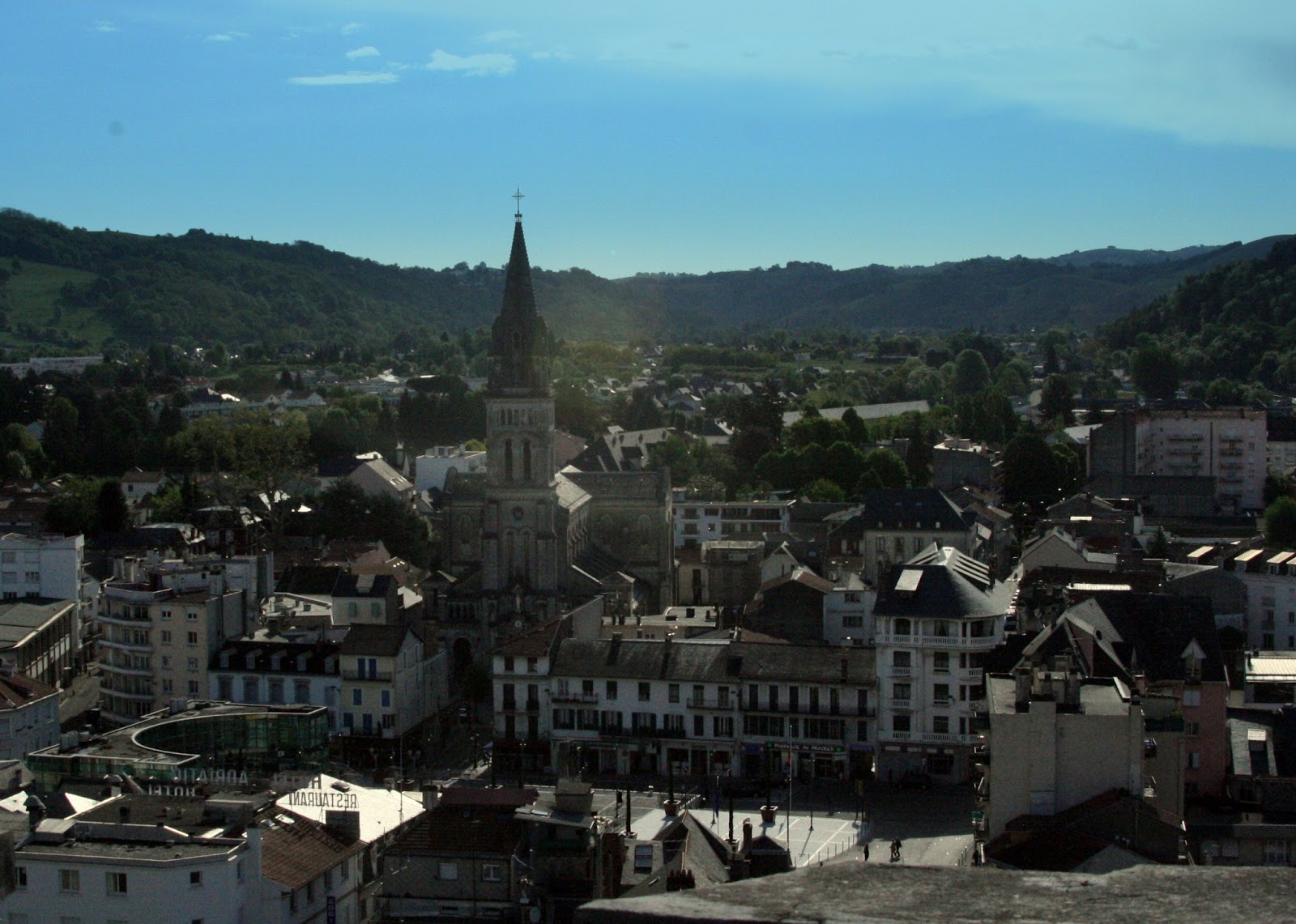 This past weekend we had the opportunity to spend a long weekend in Lourdes.  My husband was attending a conference there and we decided to take the family along for a mini-holiday.  This was my first trip to this beautiful spiritual mecca.  I am actually writing 2 posts about this weekend as there were a couple different themes to this trip - the first being the typical tours of a quaint beautiful town nestled in the Midi-Pyrenees and the second the religious significance and pilgrimages that our made to this spiritual spot.  This post will focus more on the town itself and it's beauty.

We arrived there on a Thursday evening and after settling into our hotel, we wandered out into the town to find some dinner.  One of the first things that struck me was the number of tourist and buses that were around town - this is definitely a big stop for many tours and it's amazing as the town itself only has 17,000 inhabitants.  One can see from the following photo that bus drivers have to really know how to maneuver their buses...there is just not a lot of space anywhere and the roads in this town are narrow!
This is a view from our hotel room, overlooking the river and the mountains after dark. 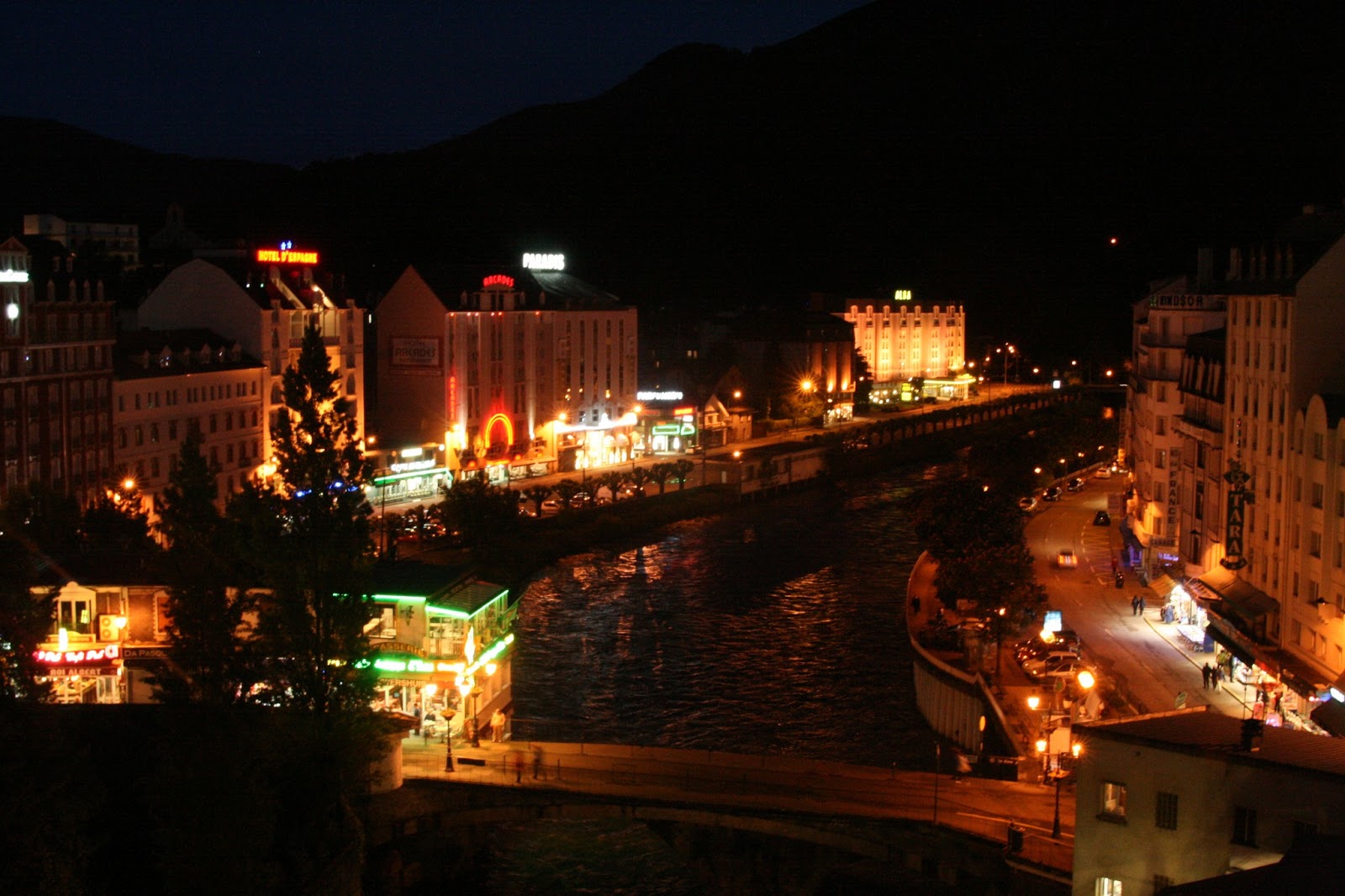 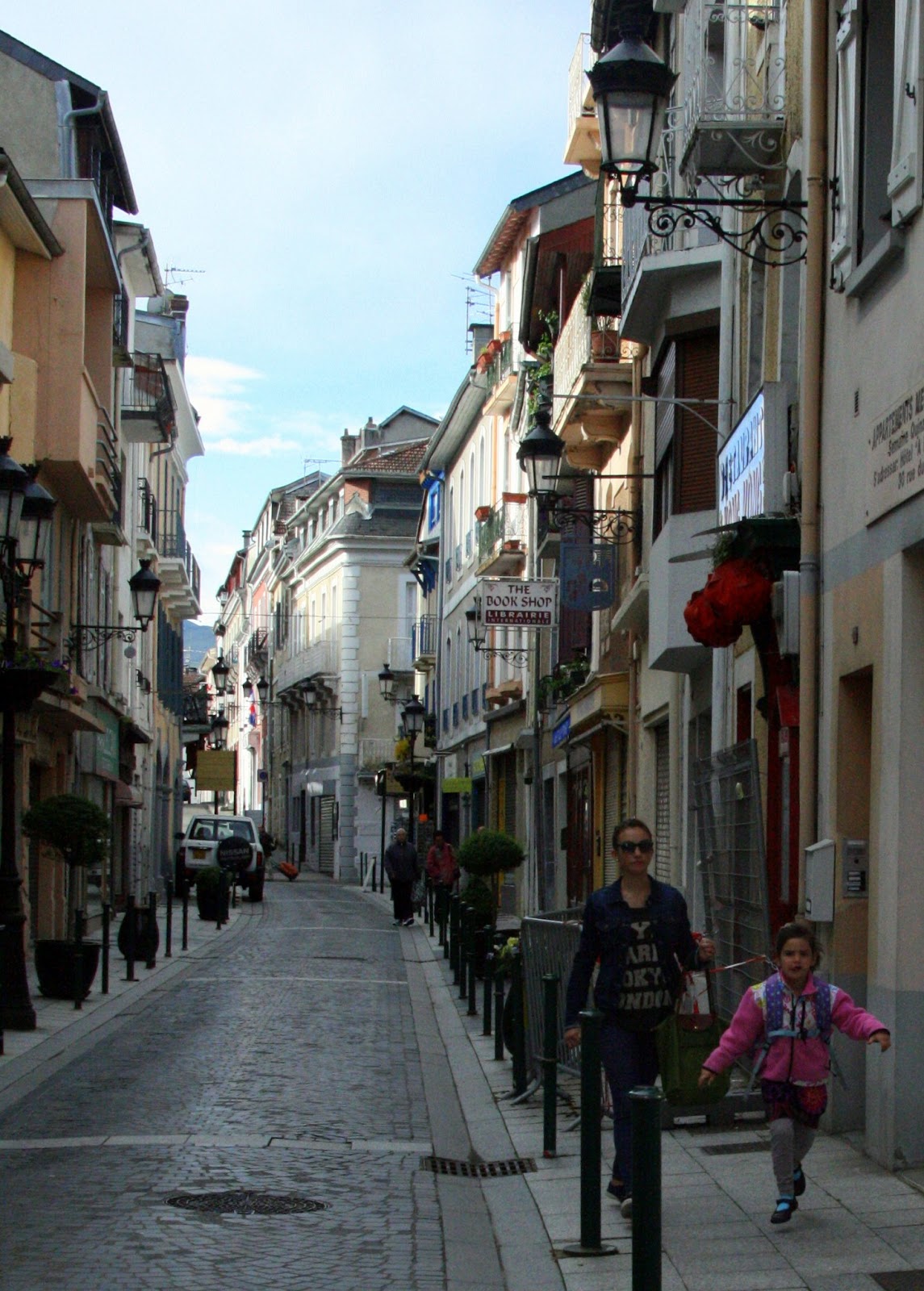 The next day the girls and I headed out to wonder around the town...first stop was to find the tourism office. I was struck by how colorful many of the building were. 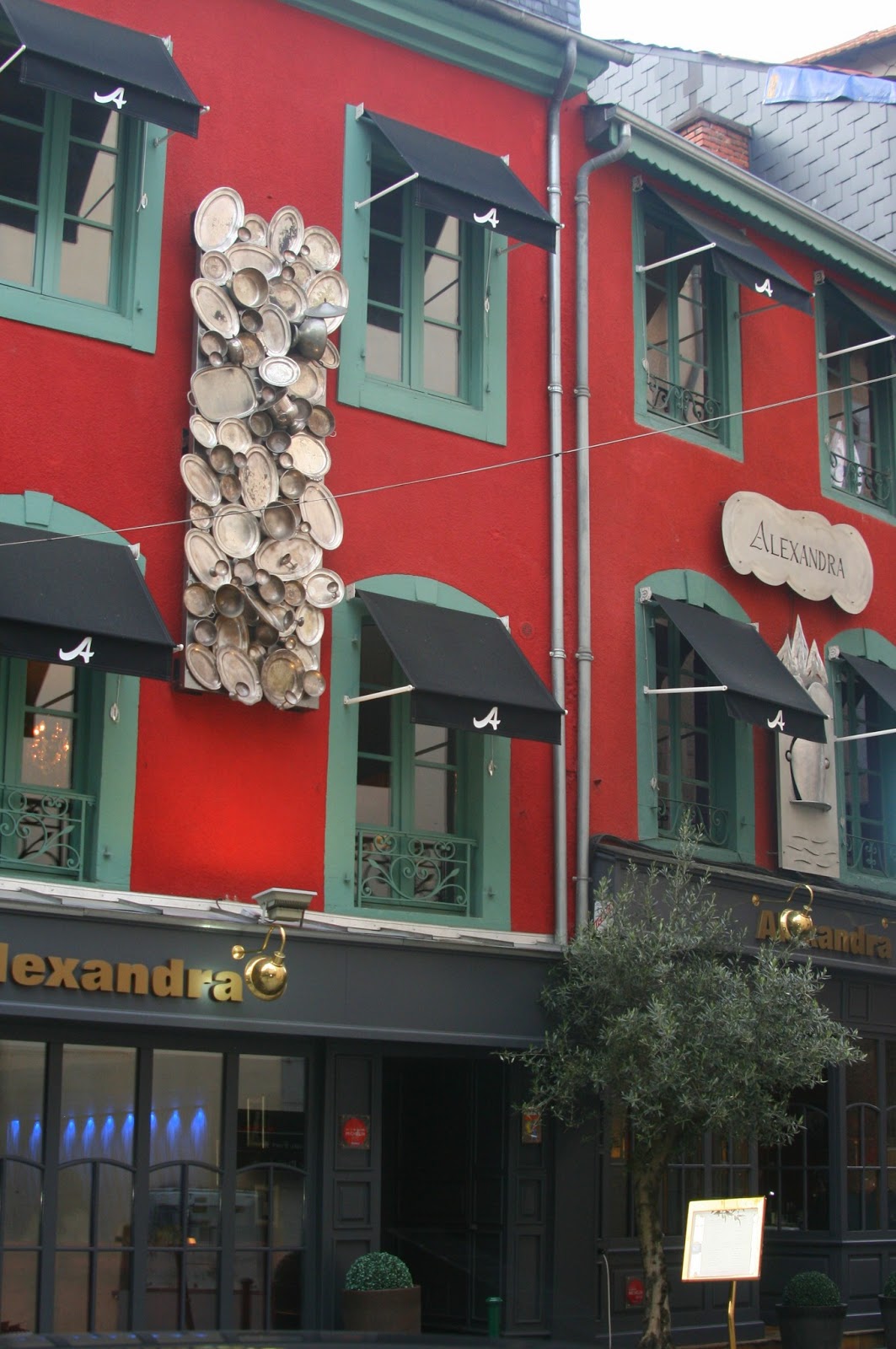 Our first stop was the Lourdes Castle or Chateau fort de Lourdes.  This amazing fortress sits in the middle of the city high up on a hill.  It's very impressive in size.  This is a view taken from the pool terrace of our hotel. 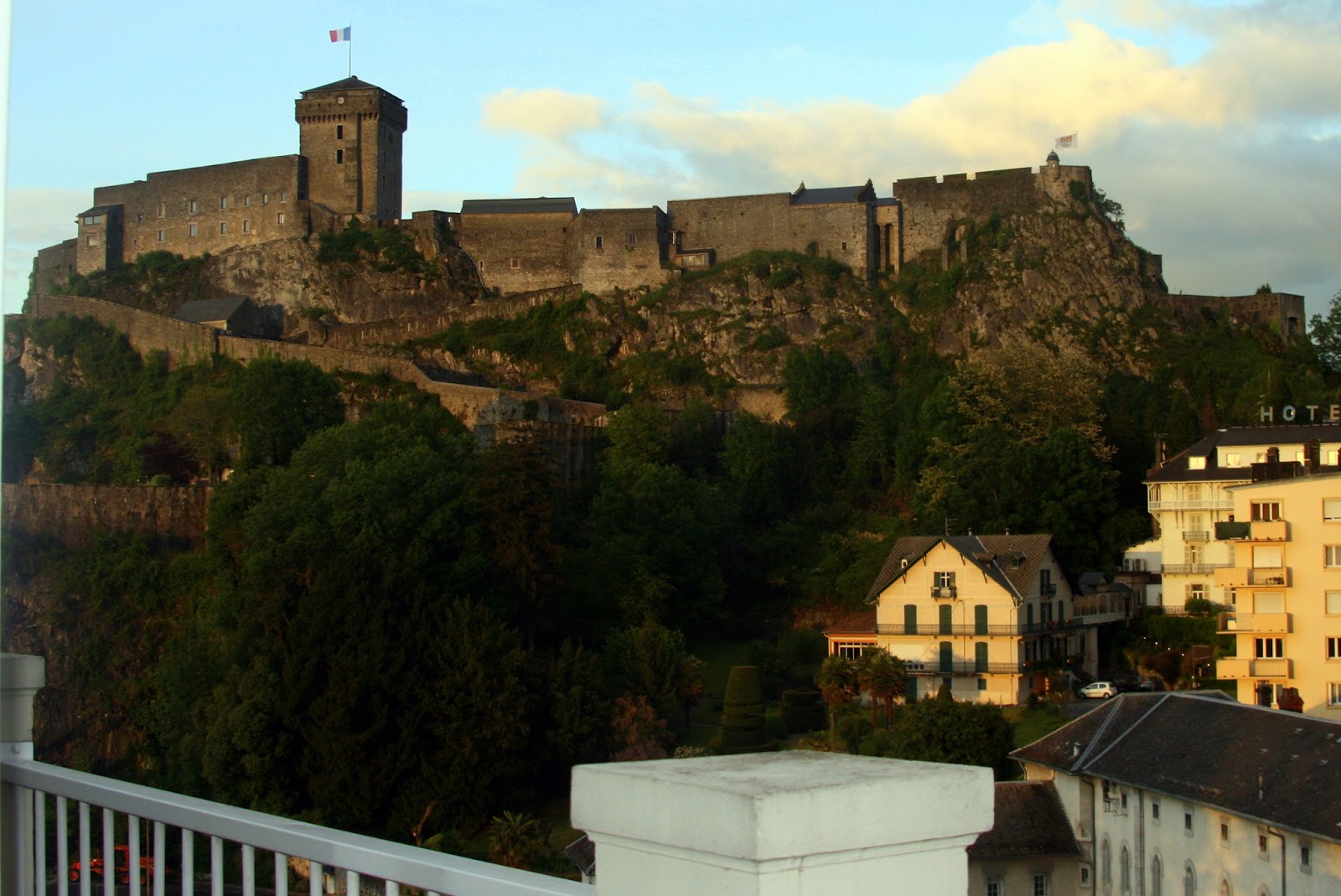 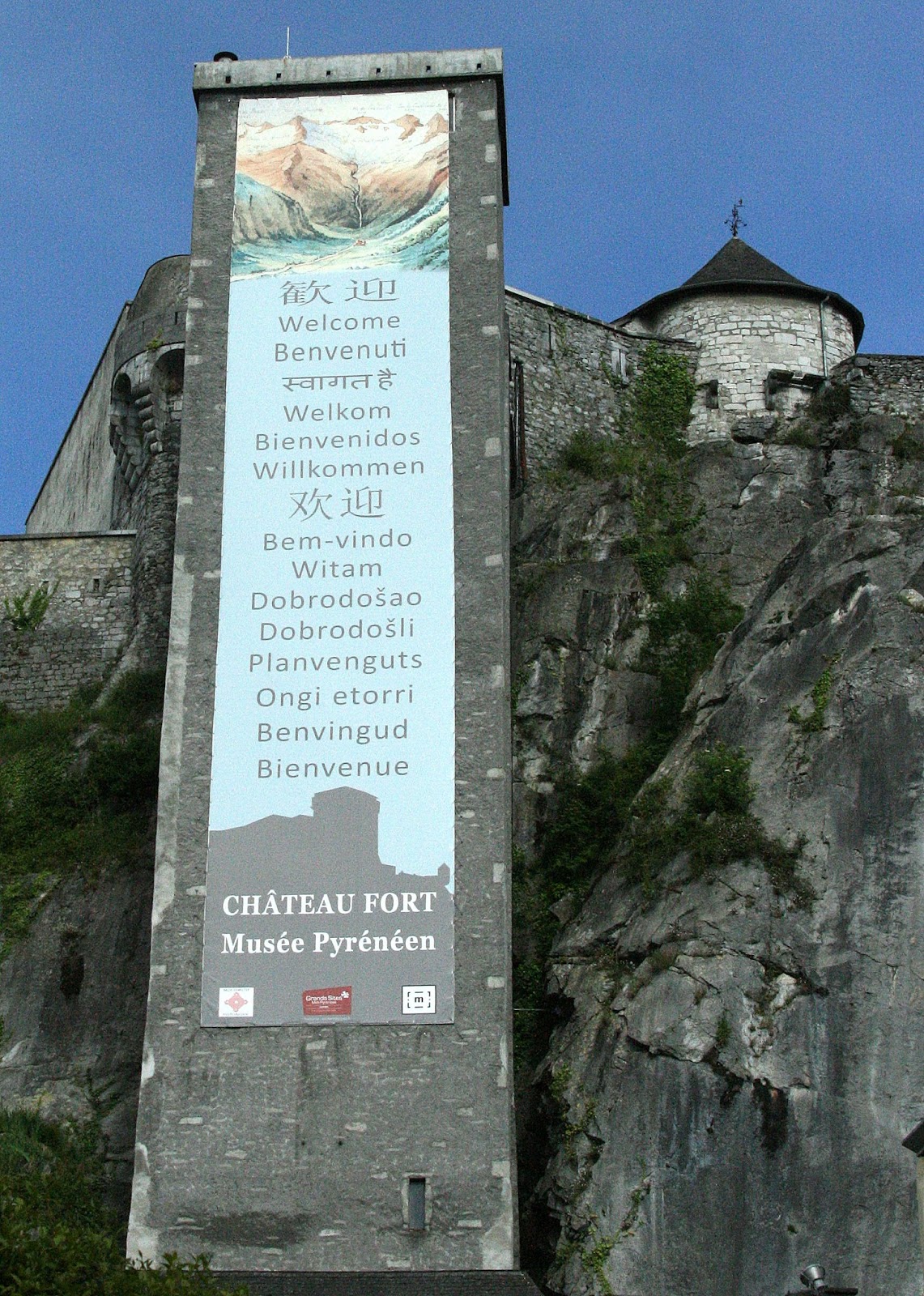 One has the choice of taking an elevator to the top of the fortress or walking up the stairs - knowing we had a full day ahead of us, and I have a 5 year old - we opted for the elevator.  This amazing fortress dates back to the 9th century, when it was used as a place from which to control the frontier and defend the area.  As the centuries progressed this castle was passed  from the regional lords, to the cathars,then to the English who controlled it and the direct lands around it from around 1300 until 1407.  From 1425 until 1607 it belonged to the house of Foix, a regional seat.  It finally became crown property in 1607 when this region became part of France.  It also served as a prison during the Napoleonic period.  It definitely has a rich history and gives a stunning view of the region. 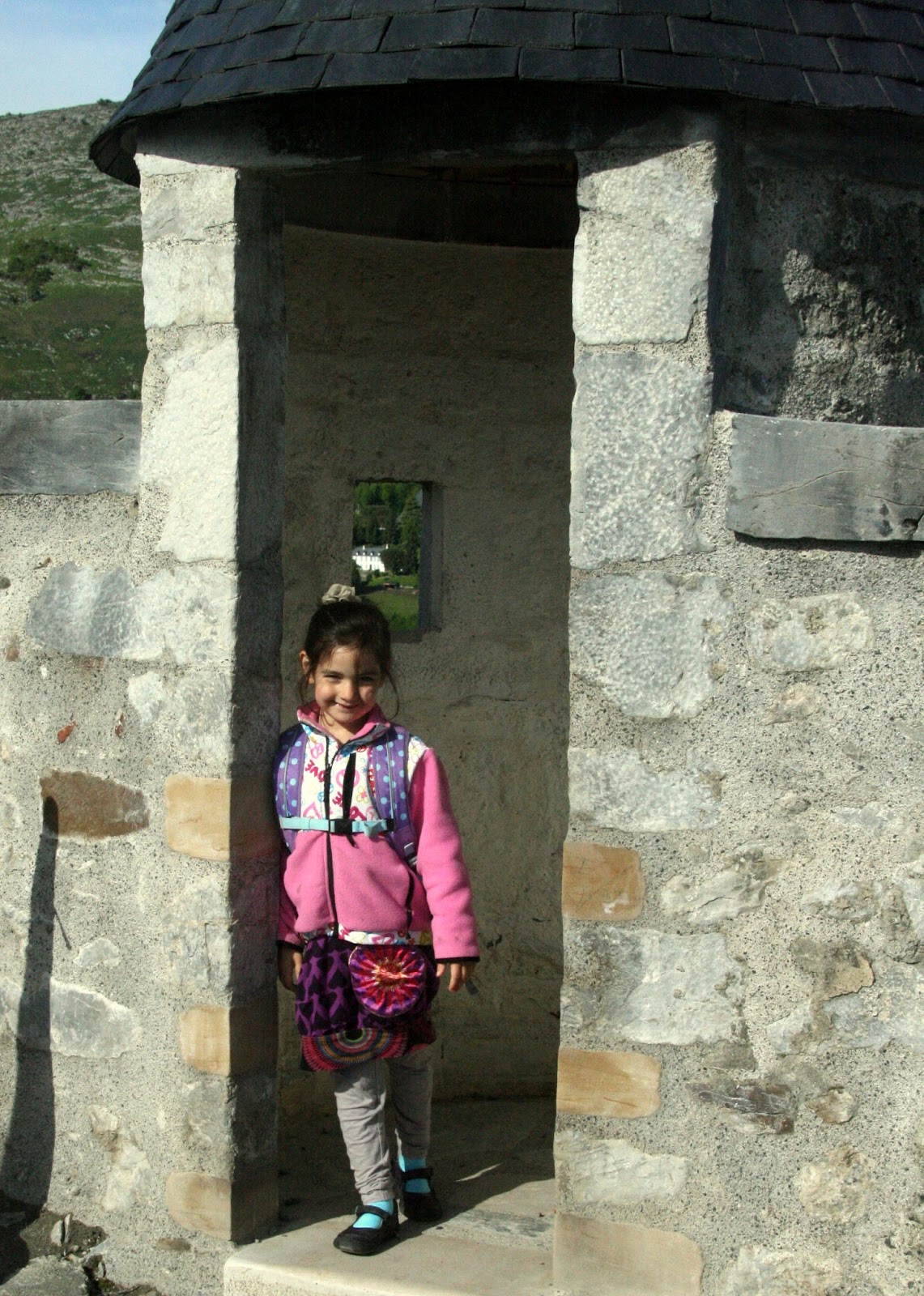 My youngest called this little turret, her princess tower.


Part of exploring this fortress was taking a path down the back side that lead to an old cemetery   It was fascinating to see the dates of some of these headstones. 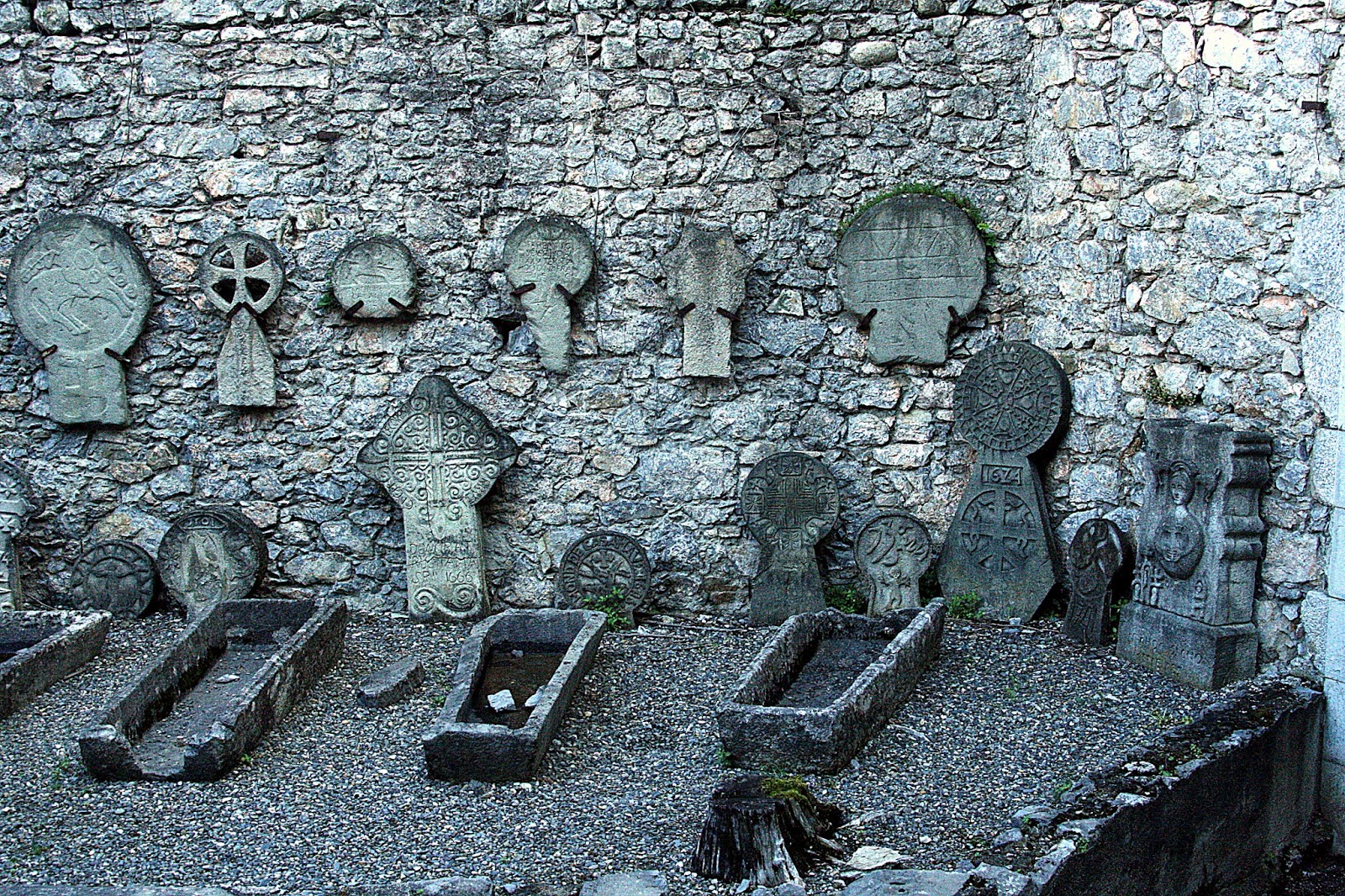 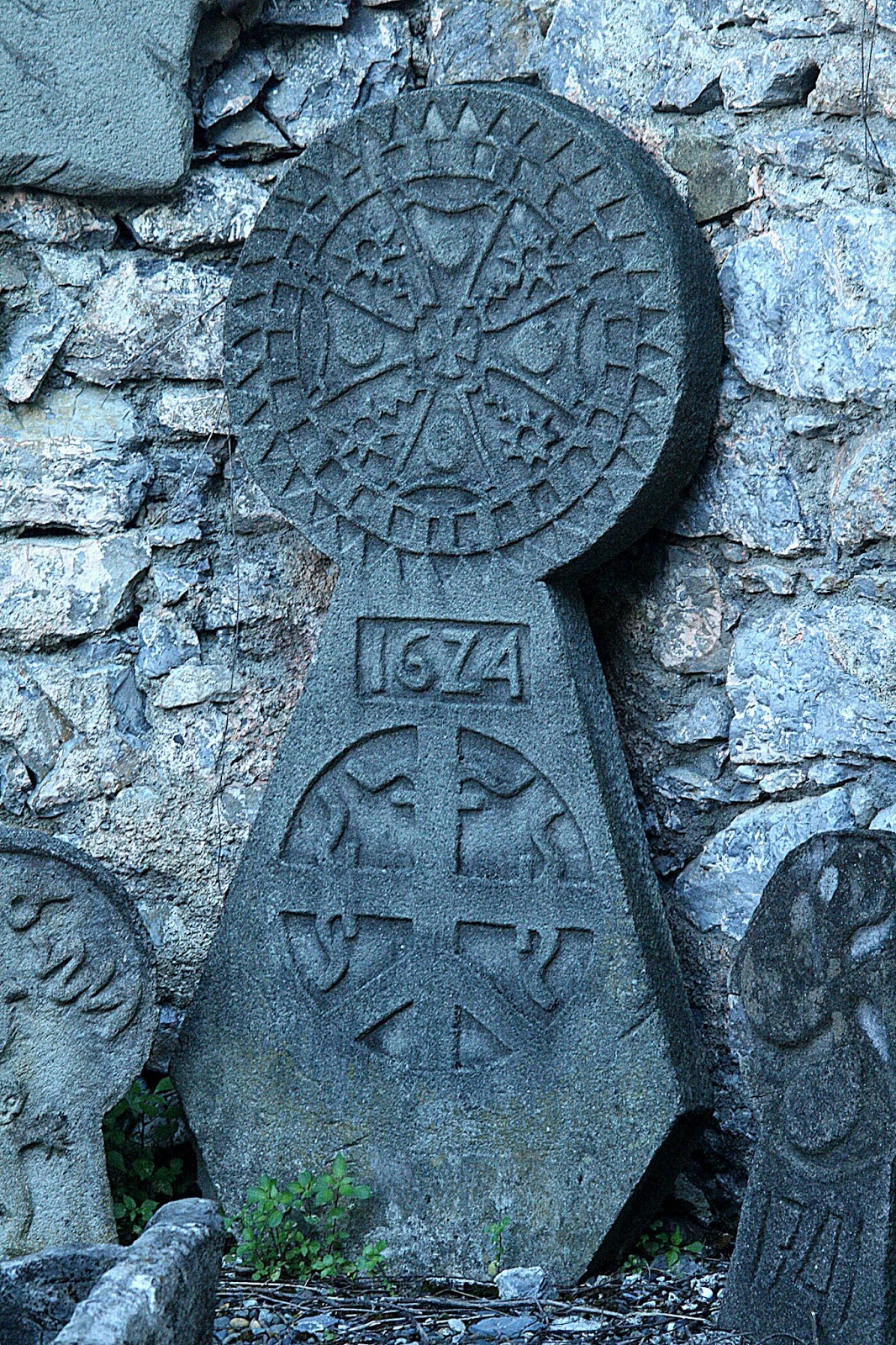 Having walked down the back side to explore the cemetery - the only way back out of the castle was back up....(good thing we took the elevator originally!) 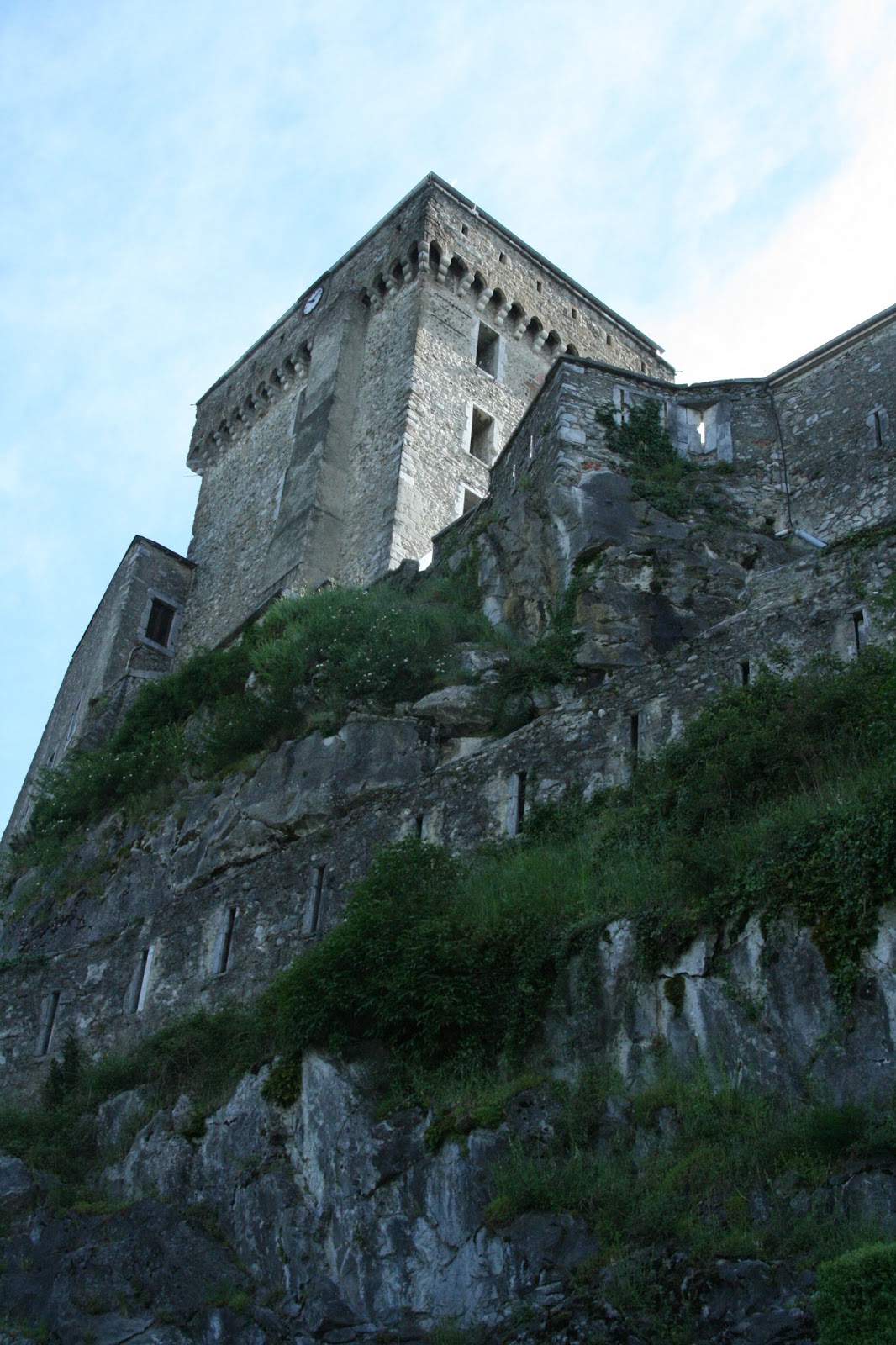 Another fascinating part of this tour, was the kid's puzzle they gave the girls - as you wondered around, you had to fill in various words and terms of the fortress. 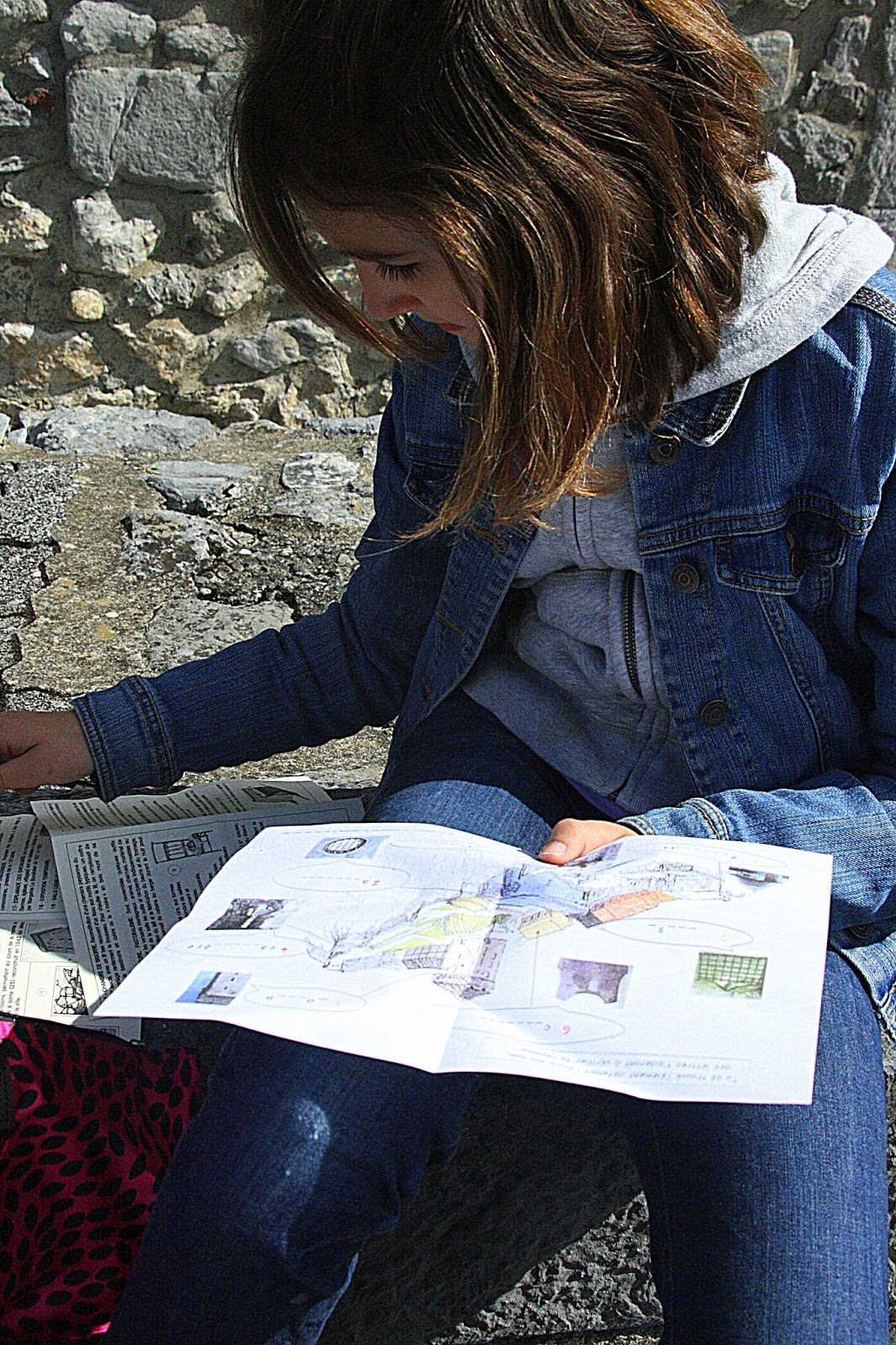 There was a beautiful little chapel on the property - I loved the old stain glass window. 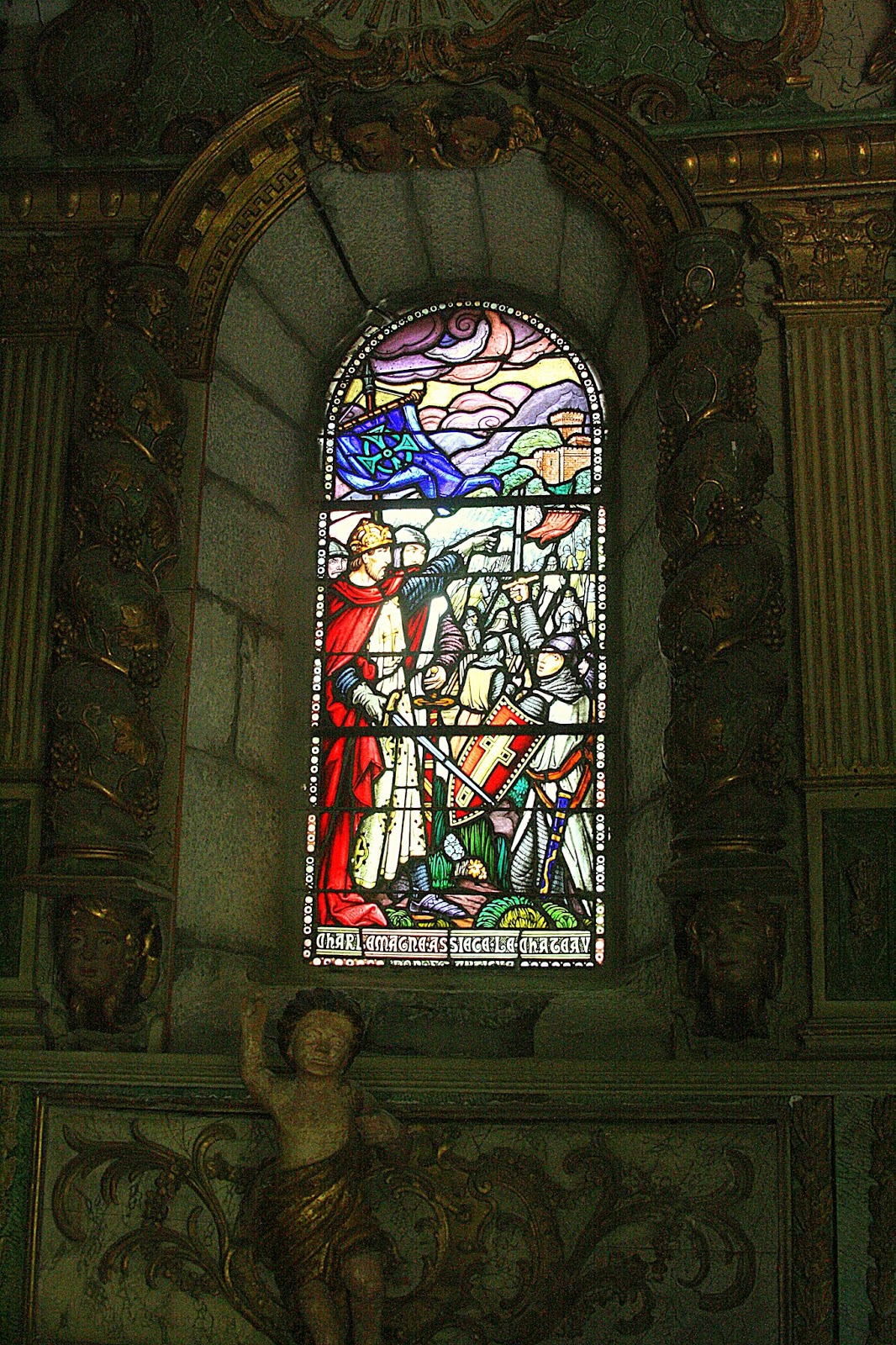 The keep, the tallest part of the fortress was used as a prison during the Napoleonic period. 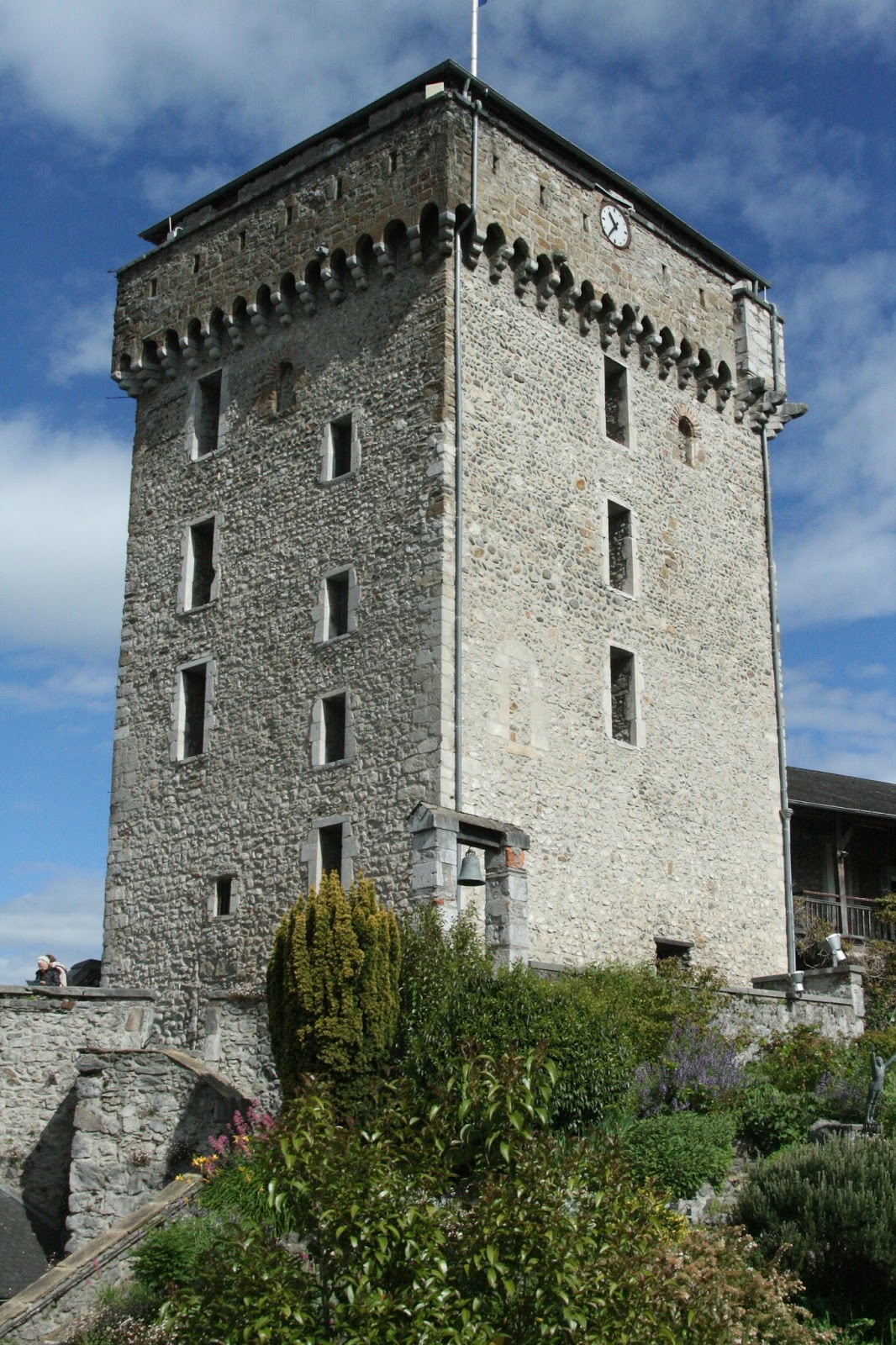 Of course the view from this Chateau was stunning no matter which direction you looked.  The following is looking toward the Basilica on the other side of the river. 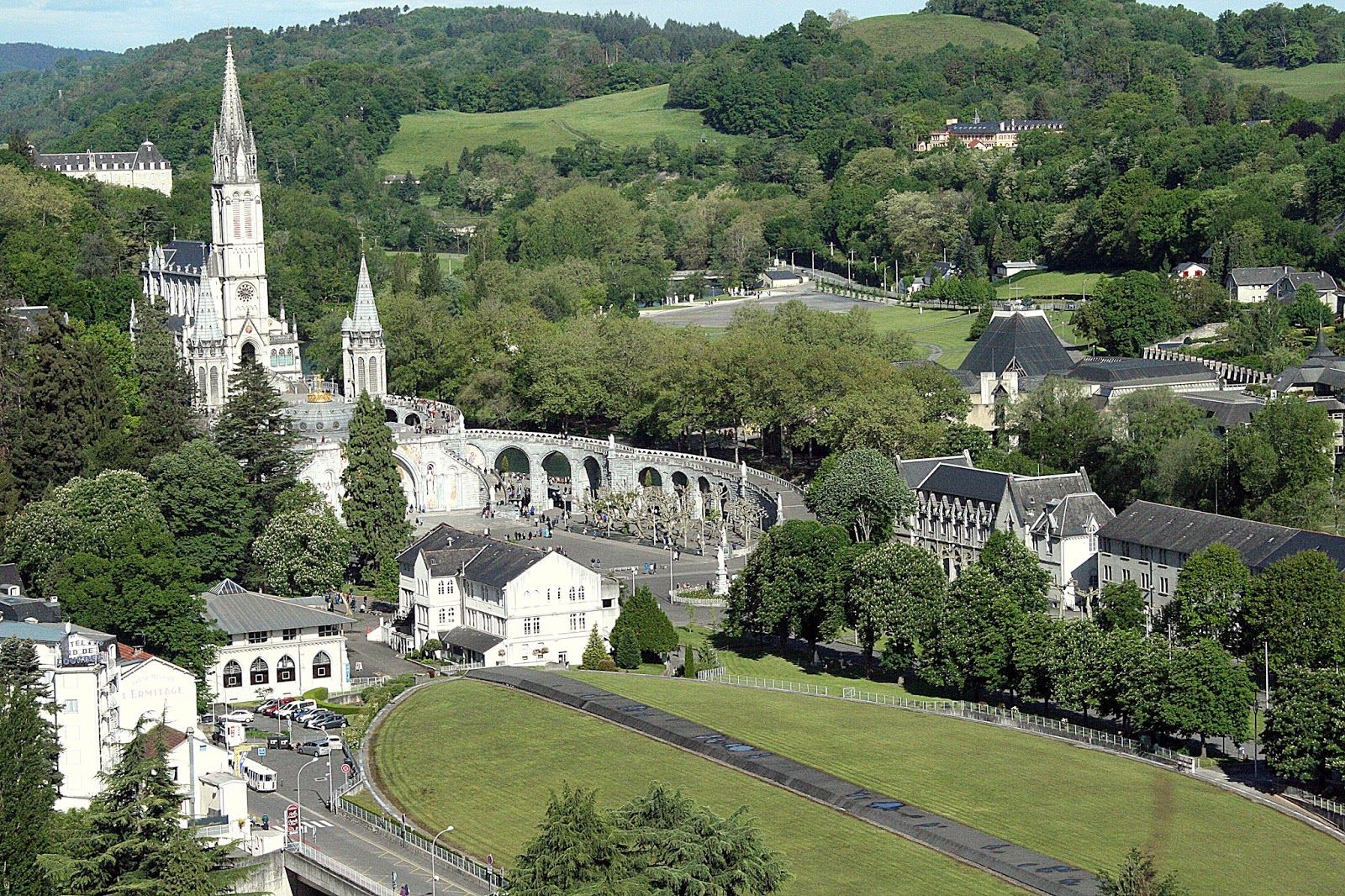 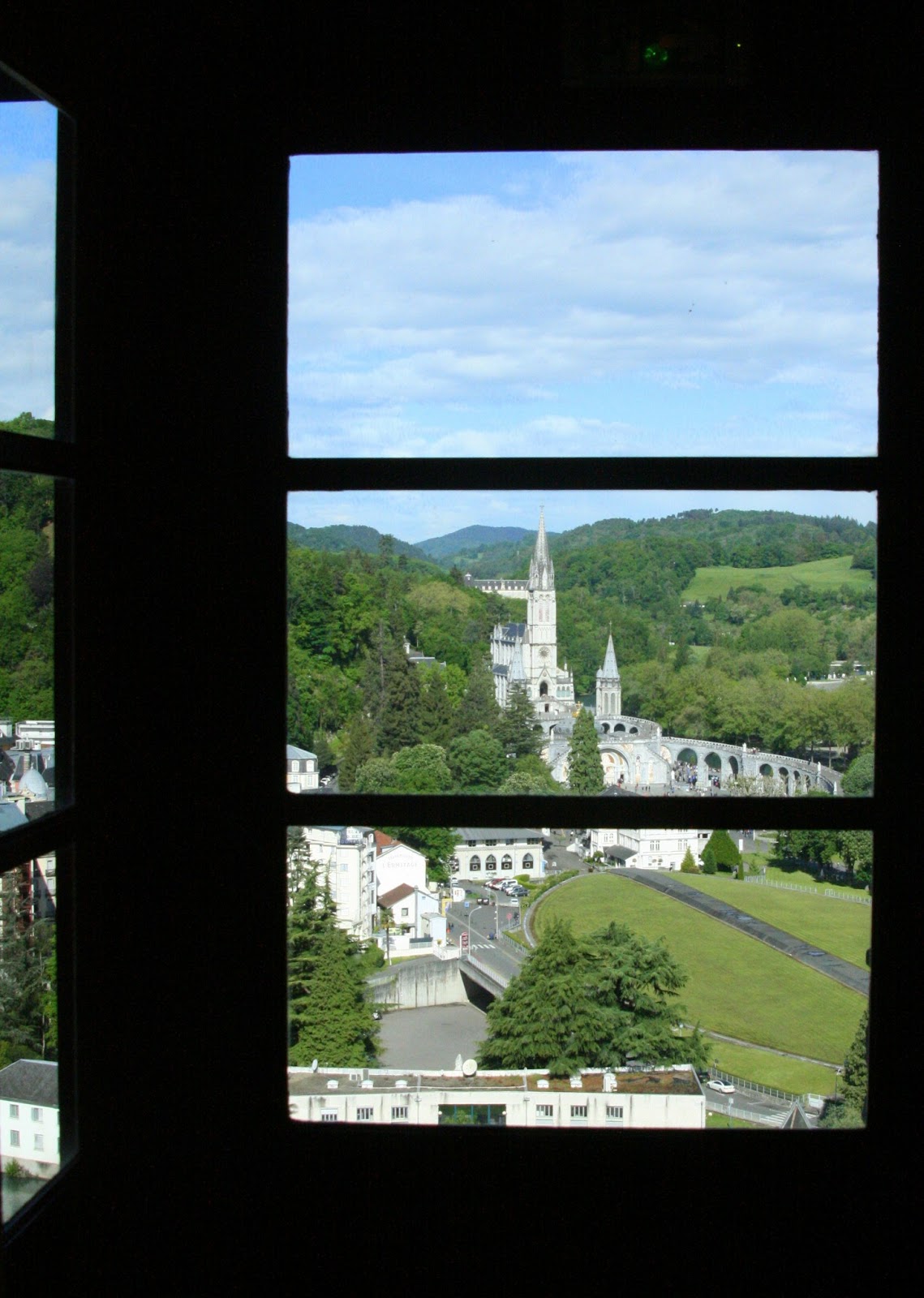 Looking in the opposite direction were the outskirts of the city and foothills. 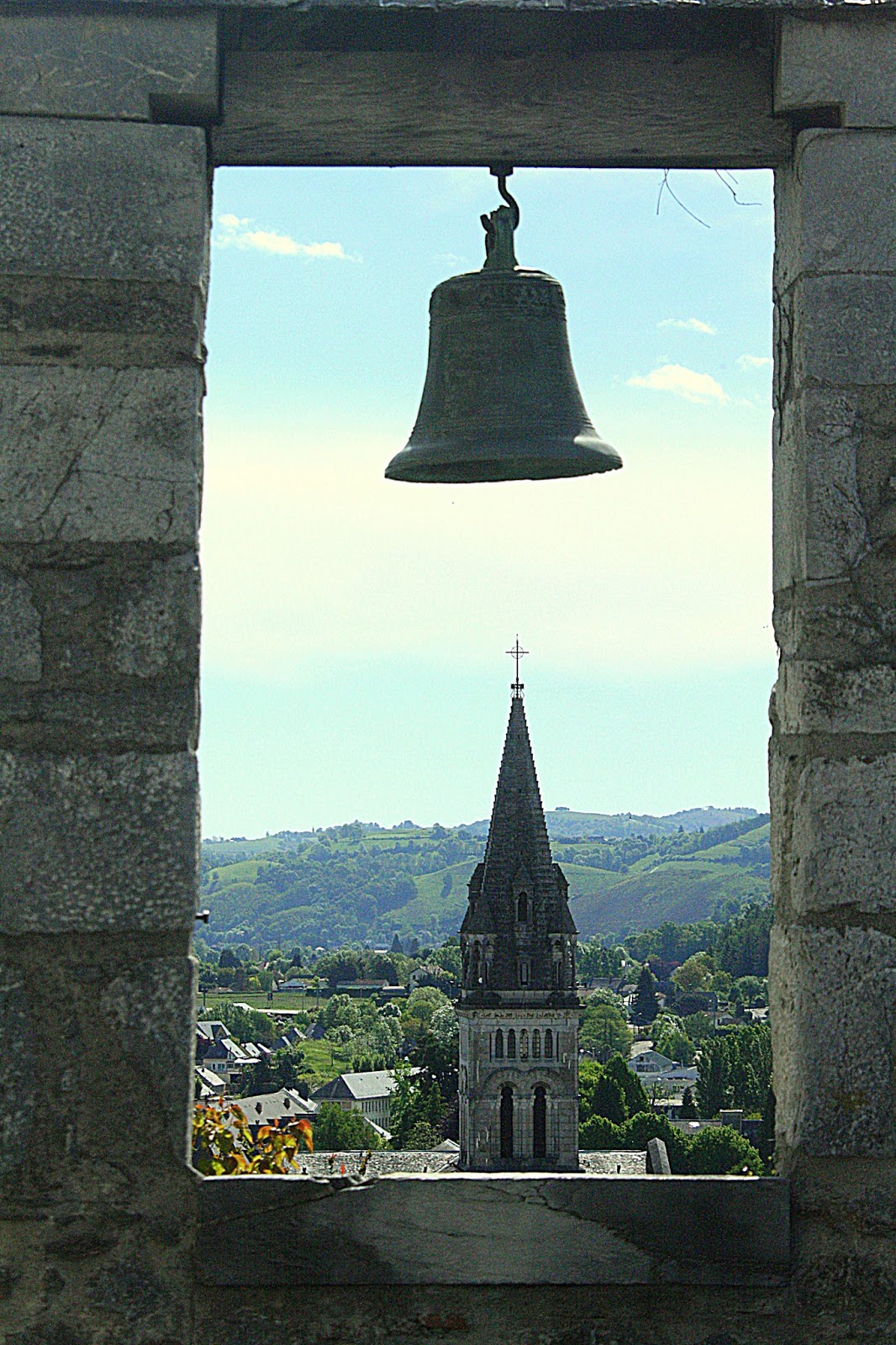 Of course the mountain views on the outskirts of the city were stunning!  It's May and there is still snow in the high peaks! 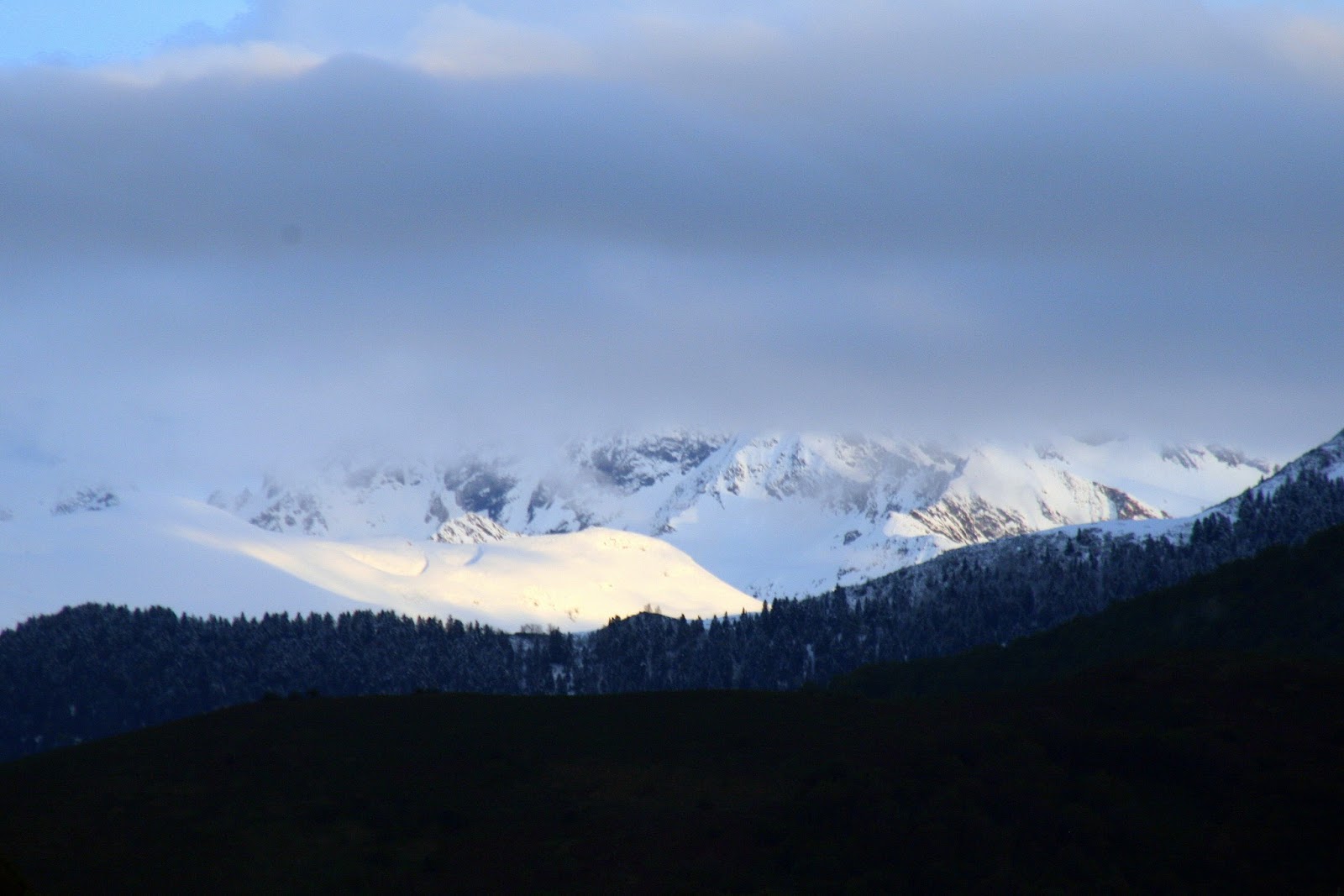 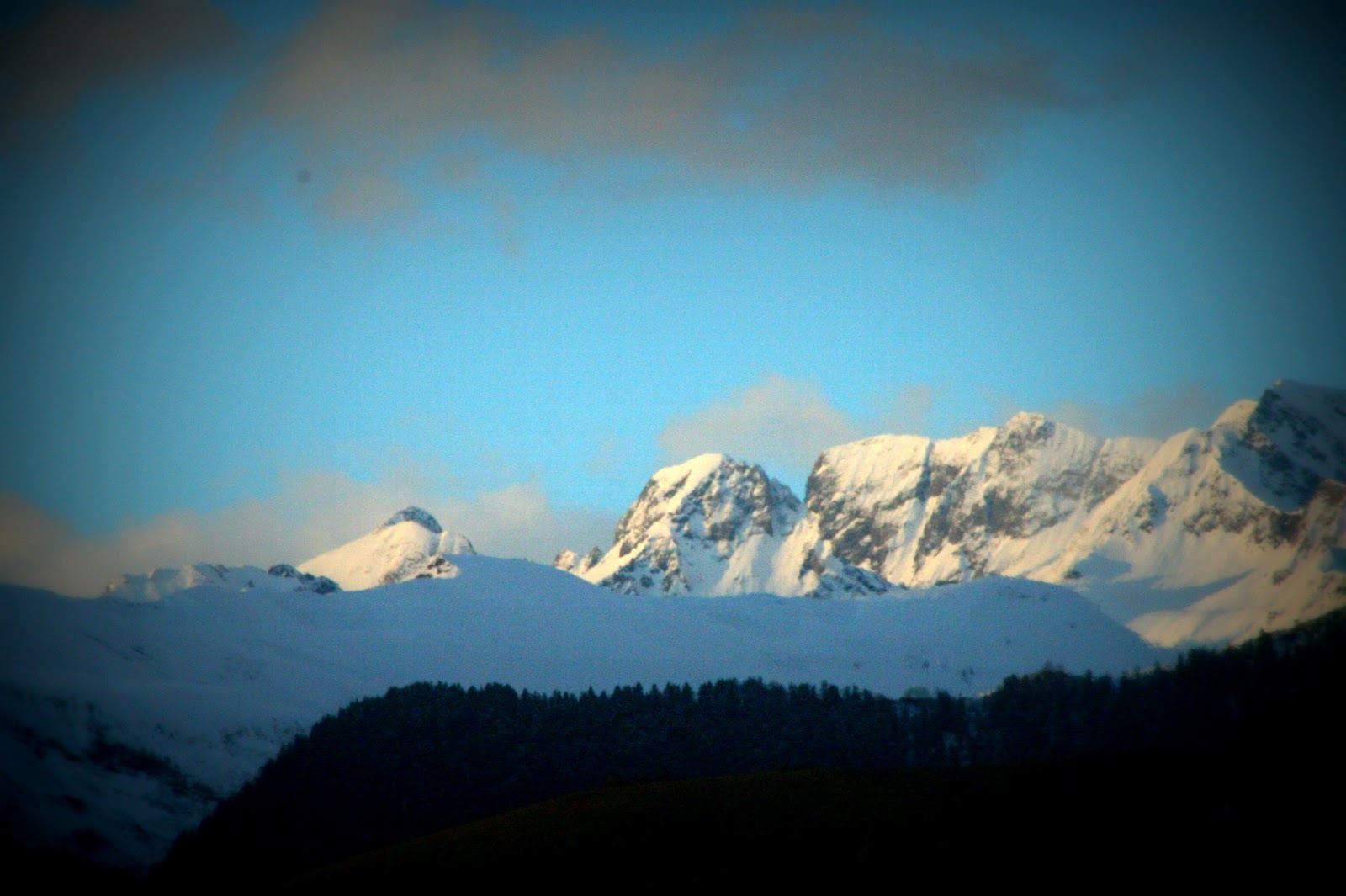 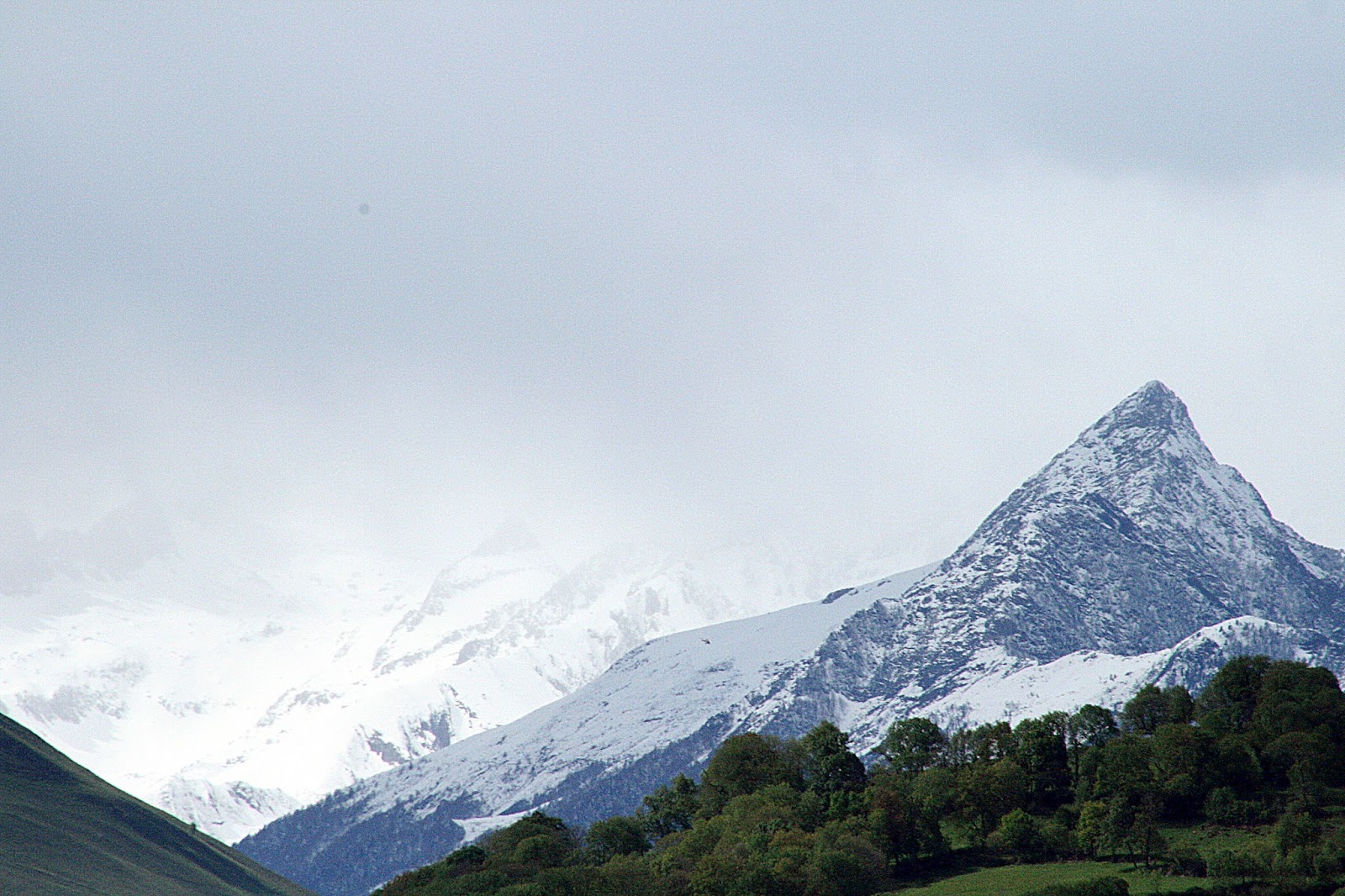 The Tourist train is a great mode of transportation around the city of Lourdes.  Not only does it drive around the whole city and describe many interesting sites, but it also allows you to get on and off at various points to tour museums & even take the funicular up the mountain on the outskirts of town. 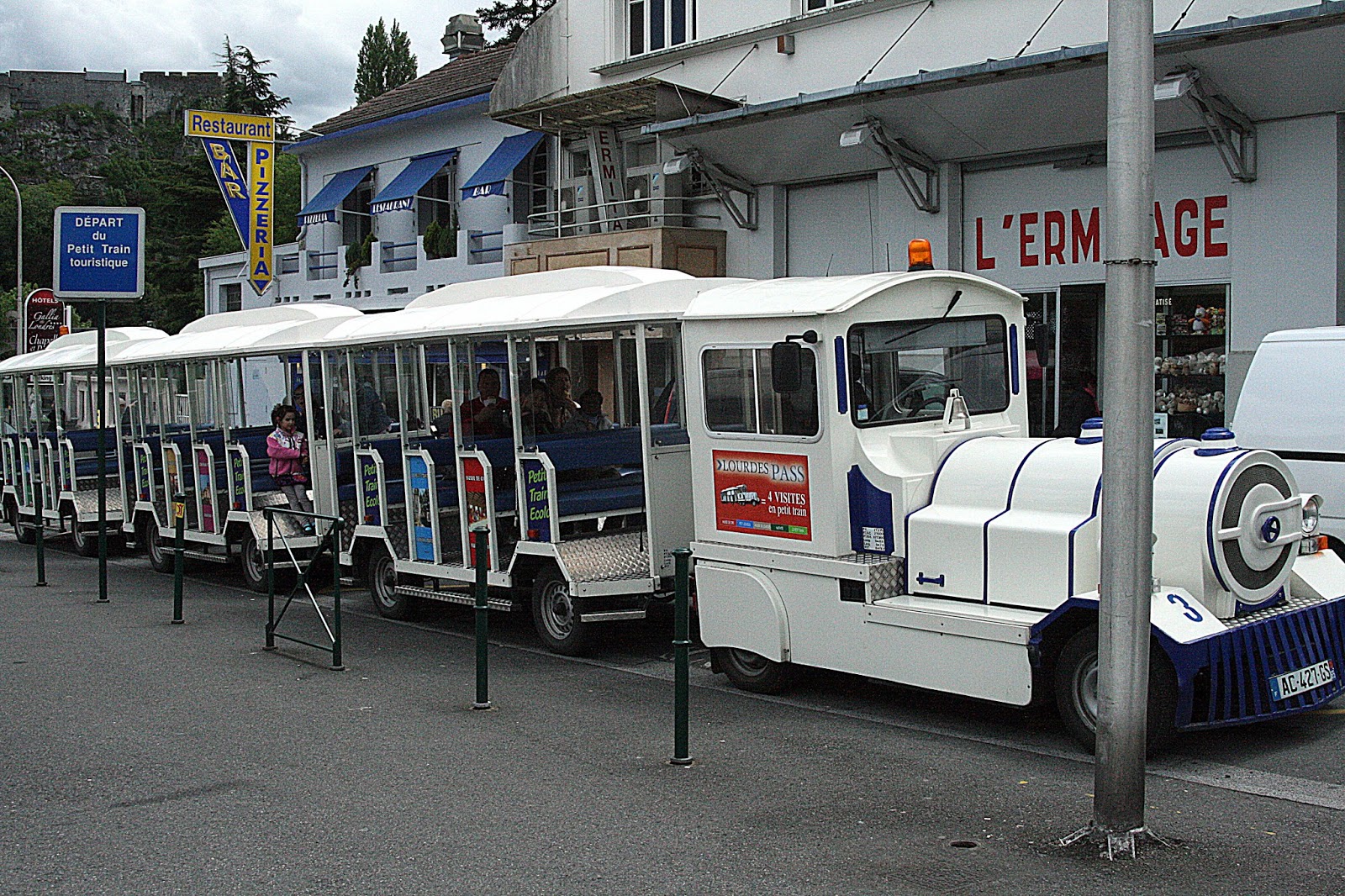 The girls enjoyed the train and a break from walking.  Of course, we got off at the Pic Du Jer site and waited to take the finacular up the mountain. 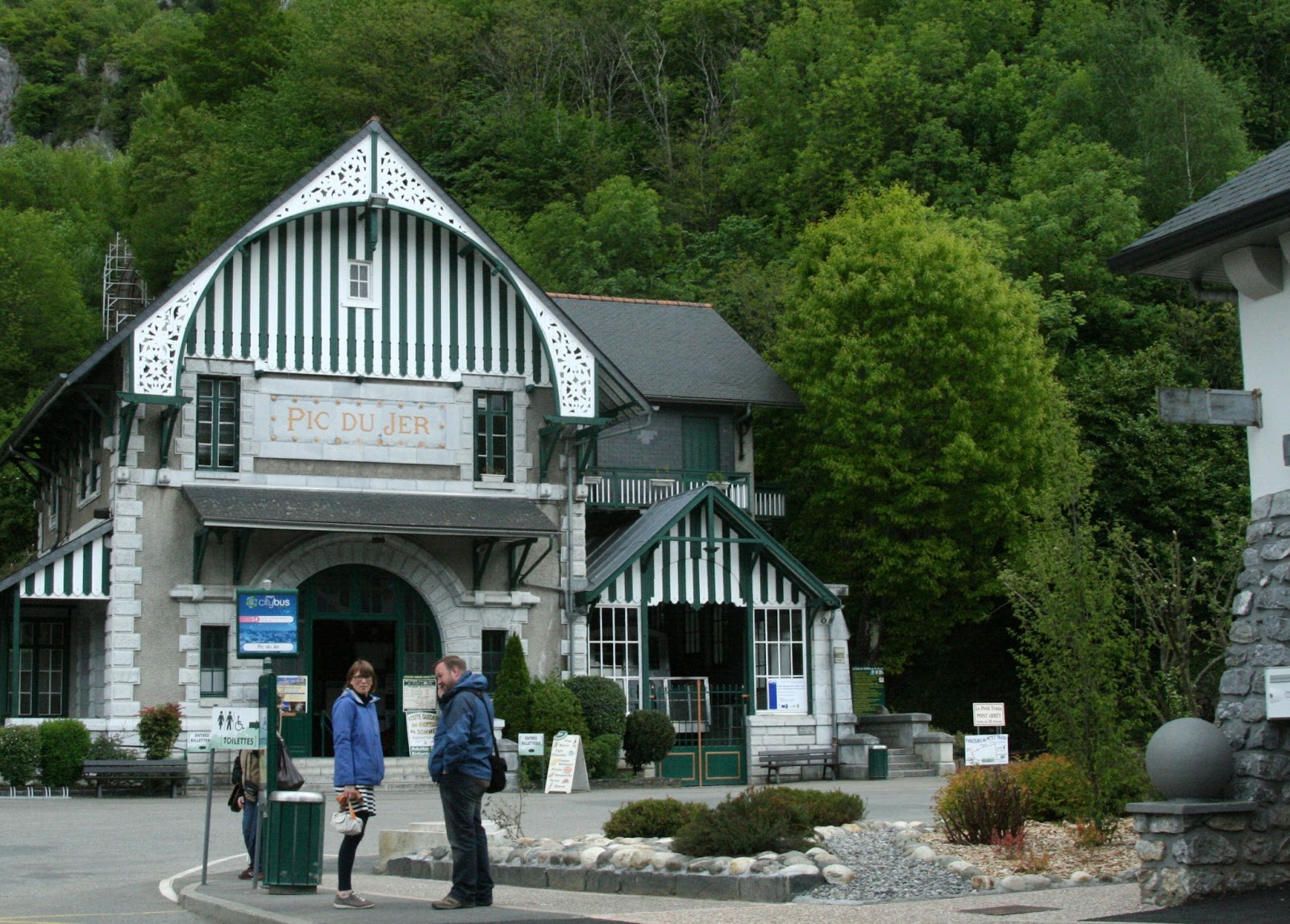 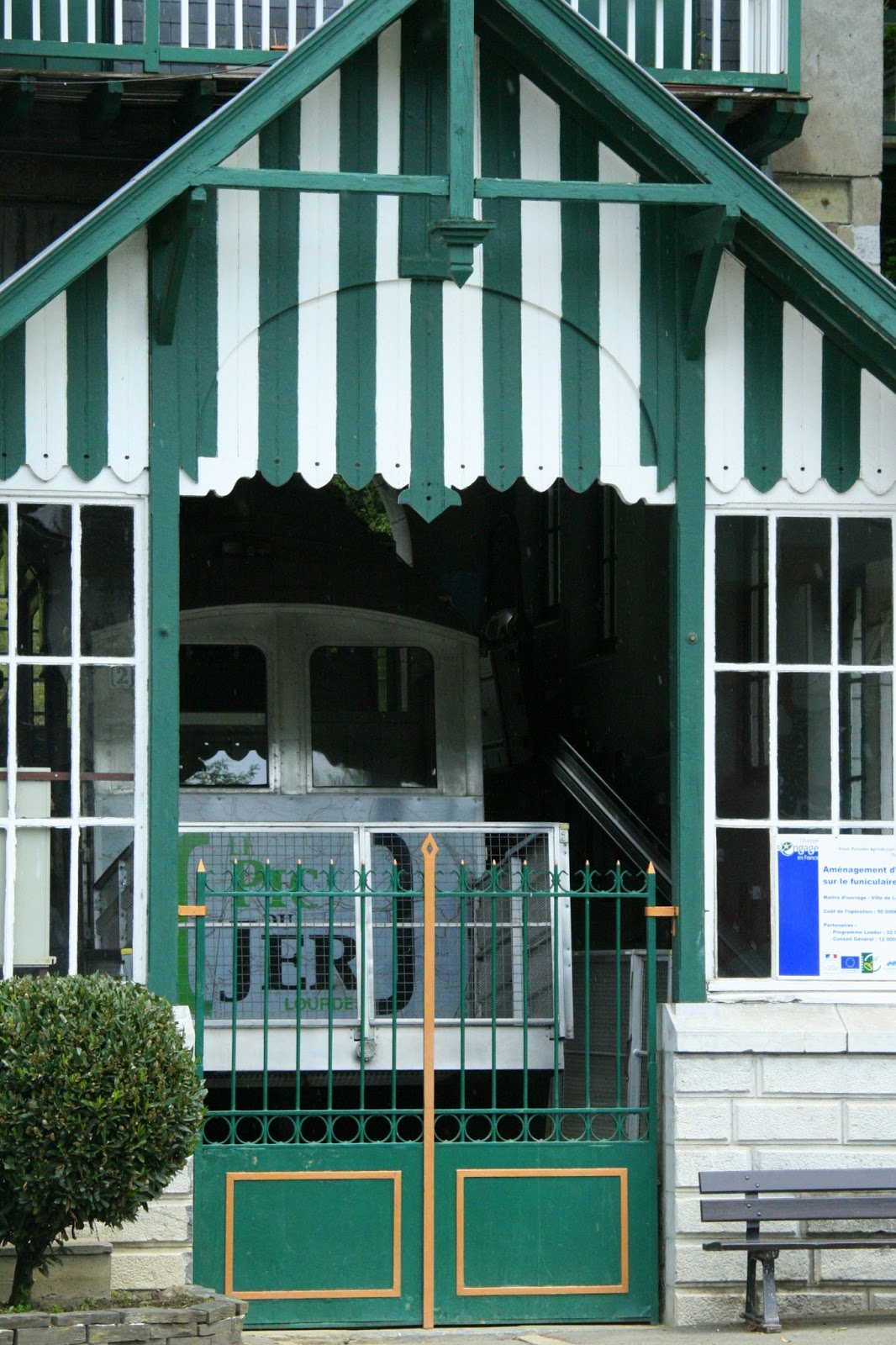 The car runs on tracks and cables up the mountain and through 2 tunnels - it's been in existence for over 50 years. 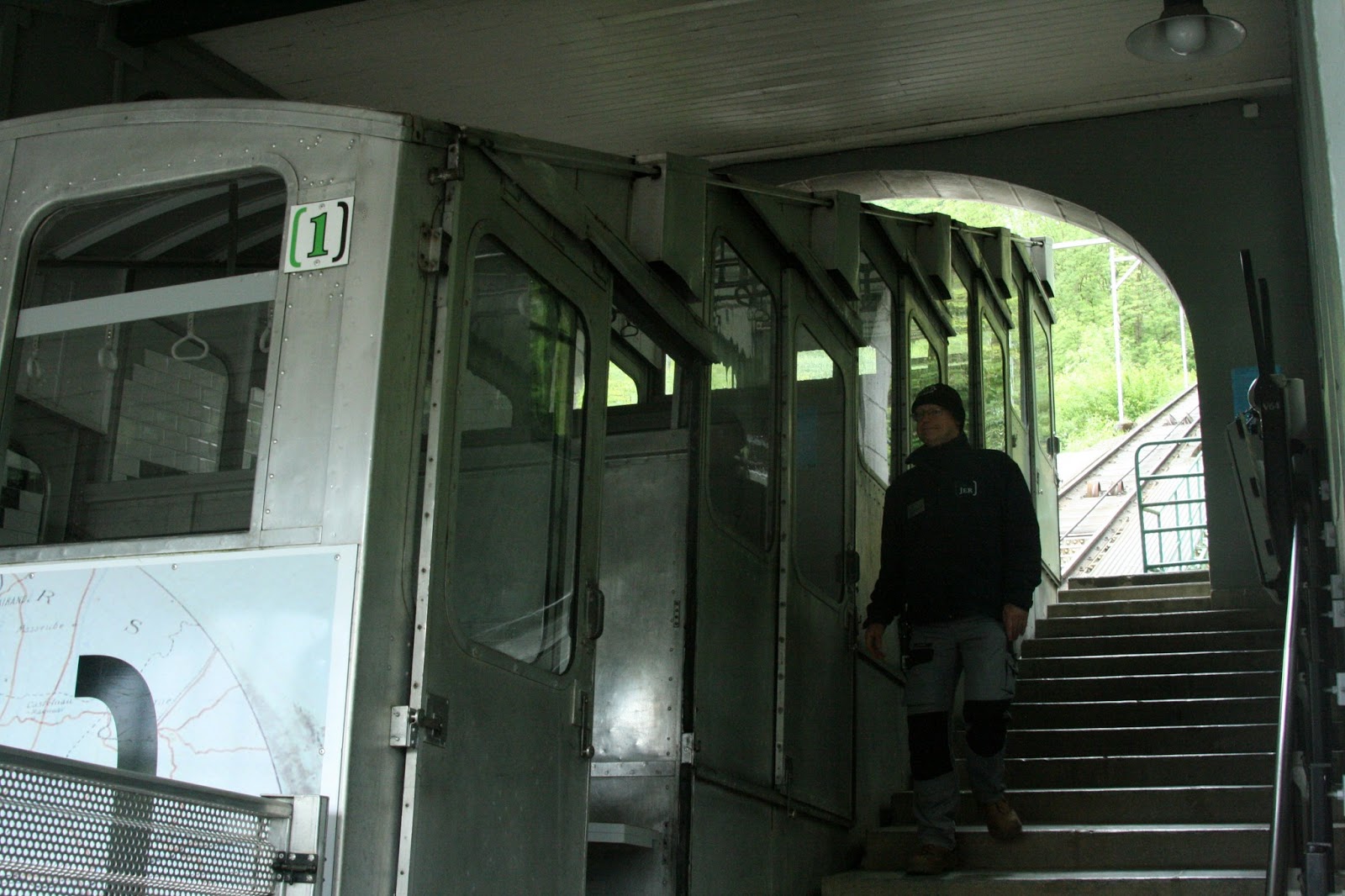 The views from the top were breathtaking!  Everywhere you looked it was stunning.  Unfortunately, we had to deal with a bit of rain - but the clouds did break up a little for some sunshine at least part of the time we were at the top.

We also enjoyed attending the daily market, one morning, and walking through the park near the mayor's office with it's beautiful fountains.  As I said in the beginning of the post, there is the whole spiritual side to Lourdes and why it's a center of pilgrimages for many people.  I will be talking about that aspect of Lourdes in Part 2.  For now - scroll back and take in the views - they certainly were beautiful and stunning.

Posted by American Mom in Bordeaux at 11:11 PM